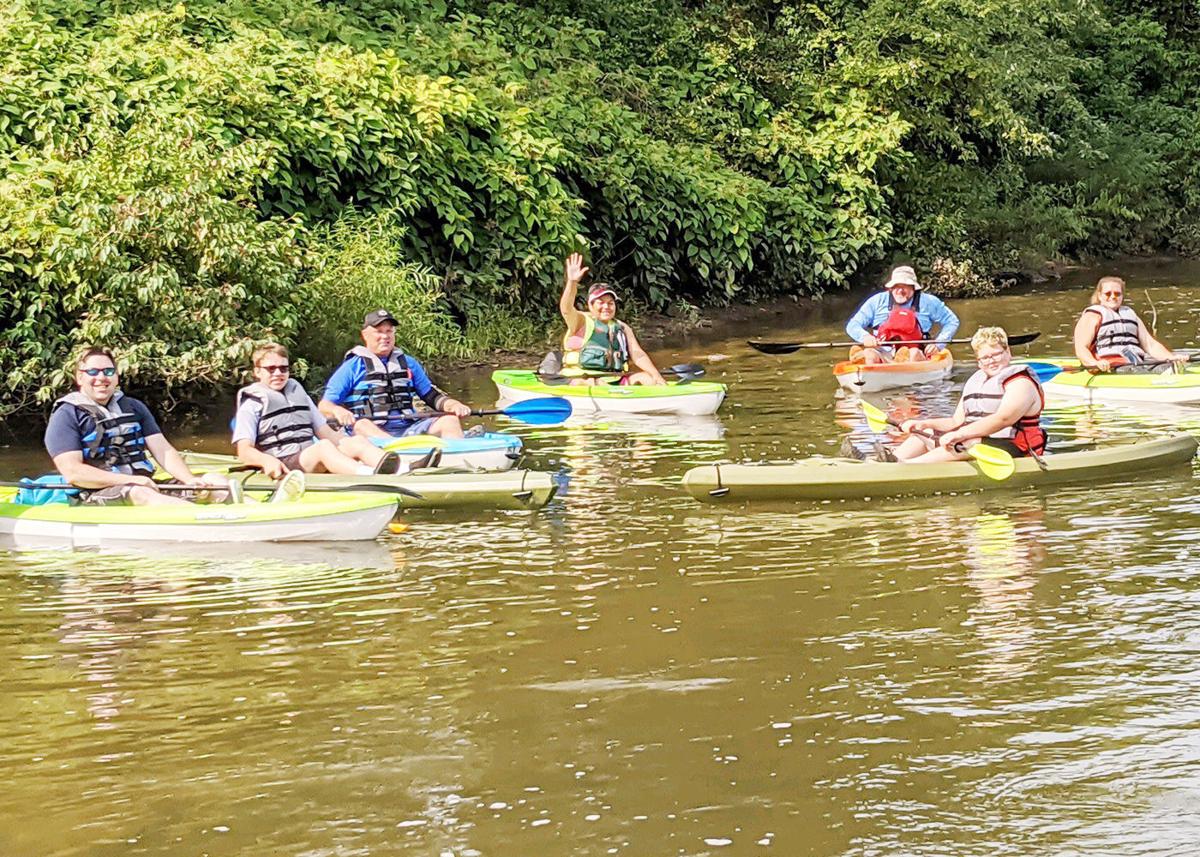 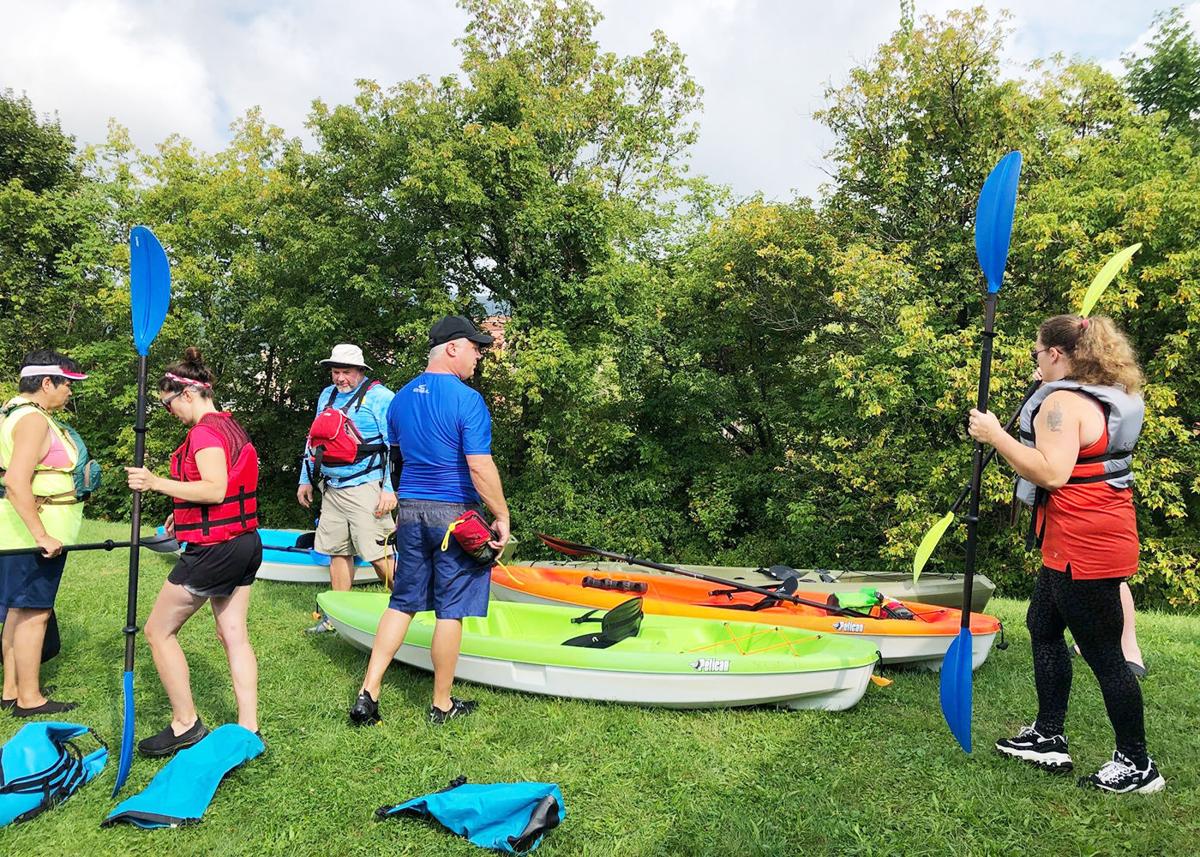 Under the instruction of Gene Jankowski, kayakers gather their equipment in preparation for the paddle downstream.

Under the instruction of Gene Jankowski, kayakers gather their equipment in preparation for the paddle downstream.

SALAMANCA — The Salamanca City Central School District hosted Salamanca Community Kayaking Day Saturday where people had the opportunity to learn about kayaking and experience a trip on the Allegheny River.

As part of the district’s Adult/Community Education program, the event was under the direction of Aaron Straus, Adult Education Administrator and Instructional Coach of STEAM.

Two groups launched their kayaks from behind the Holy Cross Club — one at 11 a.m. and the second at 12:30 p.m. They paddled down the river and ended their trip behind the high school on Front Avenue. Straus said the kayakers had the use of two new docks made possible through a grant secured by Sandi Brundage, who works for the City of Salamanca.

“The ports allow participants to load and unload their kayaks without stepping through muddy sediment, which is prevalent in the Ohi:yo’ water,” he said. “The launch made a difference to the experience as participants could focus on river safety rather than mucky trudging.”

Along the way, the participants saw heron, osprey and mallards. Straus said the group noticed an adult male bald eagle flying towards its nest along the river during the trip.

“Mr. Jankowski explained to the group that the bald eagle’s nest was/are a rare sight in New York state,” he said. “In 1970, there was only one active American bald eagle nest in New York state and it didn’t produce any eaglets. Wildlife repopulation efforts are protecting and preserving several nests throughout NYS, including the one we saw on the trip.”

Straus said the kayaks were brought for the first year of STEAM Camp, as well as for community engagement events. Due to the need for someone to coordinate all the logistics, safety and kayak maintenance involved in kayaking, the Kayak-Adventure program eventually evolved into its own program, which Jankowski and Wade head. He said the STEAM Camp, Adult Education and Adventure programs often work together for special programming such as this event.

Jankowski said when they got the kayaks in 2018, one of his plans was to provide river trips for the community. The school would provide the kayaks, paddles, life jackets, certified staff and transportation. They were given support from the school to offer this activity to the community.

To provide storage and a means to transport the kayaks and gear, the transportation department converted a school bus into a kayak bus and painted it red. Jankowski said they have 32 kayaks, paddles, life jackets and safety gear. The public just has to show up for a quick trip on the river, and they take care of the rest.

Seneca Intermediate School recently took the seventh graders to Allegany State Park for kayaking on Red House Lake with the certified staff at Seneca. Jankowski said the Summer STEAM Camp directed by Straus focused on water in its initial year and they did a river run as part of that camp.

According to Jankowski, Adventure Camp was developed as a summer activity to get students kayaking, beginning in the summer of 2019. It has expanded this year to a few other activities, including a trip to Moss Lake in Allegany County and a trip to Rock City Park. Adventure Camp also coordinates the eighth grade trip to Sky High Adventure at Holiday Valley.

“This was a group effort all the way. The school district has supported this with certifying staff, training our students, and then doing this for the community,” he said. “Adventure Camp was the means to connect kayaking and other summer activities with our students.”

Jankowski said the school also pays for their memberships with the American Canoe Association (ACA) as they certify staff. He said they have certified 26 Salamanca staff since 2018, and an additional four staff from neighboring school districts that have also had or are starting kayaking programs. Next year they will have their first group of certified staff up for renewal.

“COVID has slowed down the expansion of the kayaking program,” he said. “We are looking at renting the kayaks to the community during the summer, through the high school business department. We are hoping to get this off the ground next summer.”

Straus said they always envisioned this event as evolving into a community-focused program that would support outdoor recreation and tourism in Salamanca. He said much like in Allegany State Park where visitors can rent paddle boats and kayaks, they worked with the school district to set up systems so Salamanca community members could rent a kayak from the school for the day at no or minimal cost and/or community groups could take a run down the river events.

“This is a great way to educate the community with kayak safety and provide a safe way to expose everyone to a great community resource, the Allegheny River,” Jankowski said.