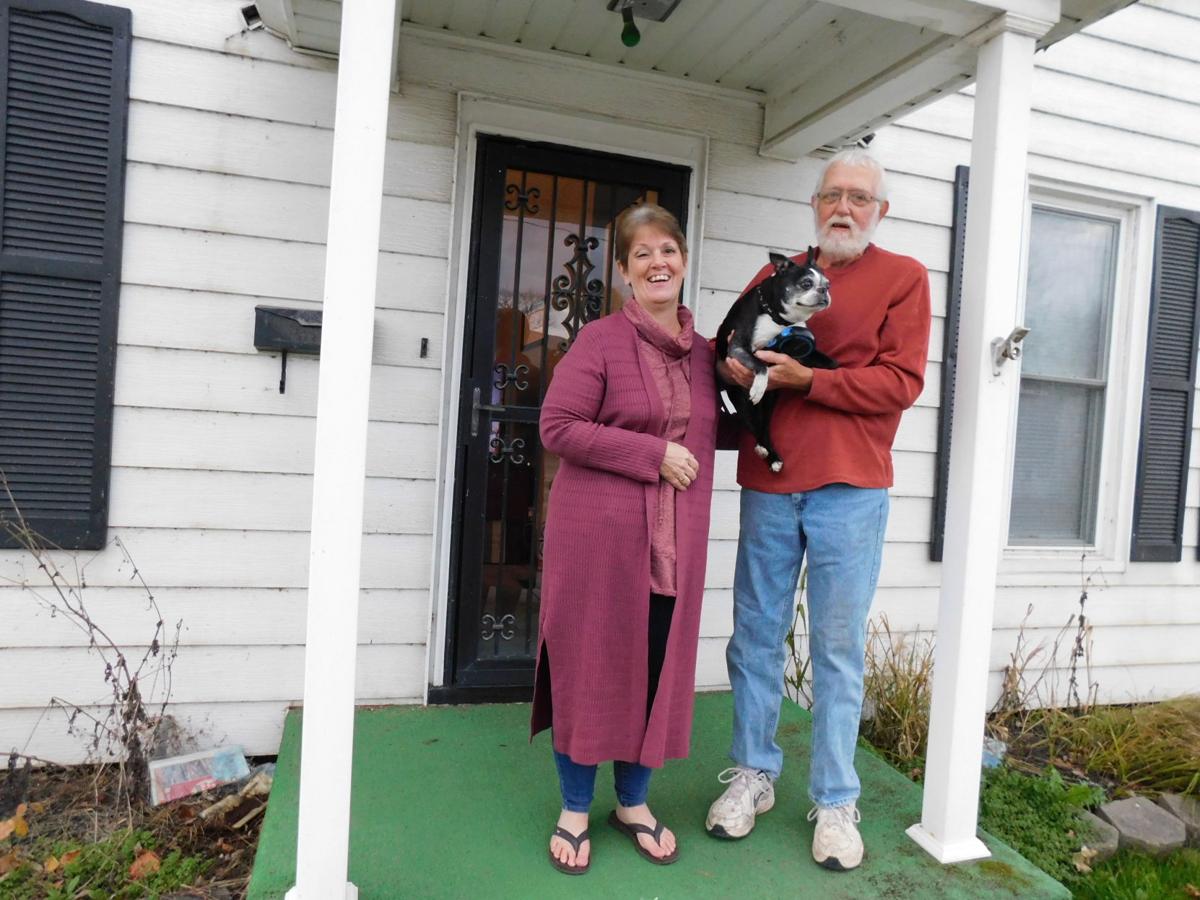 Ron and Betty Jo Volz are shown with their dog, Hemi, at their current home in the village of Allegany, where they moved after their former house on West Branch Road was destroyed by an explosion Nov. 18, 2019. 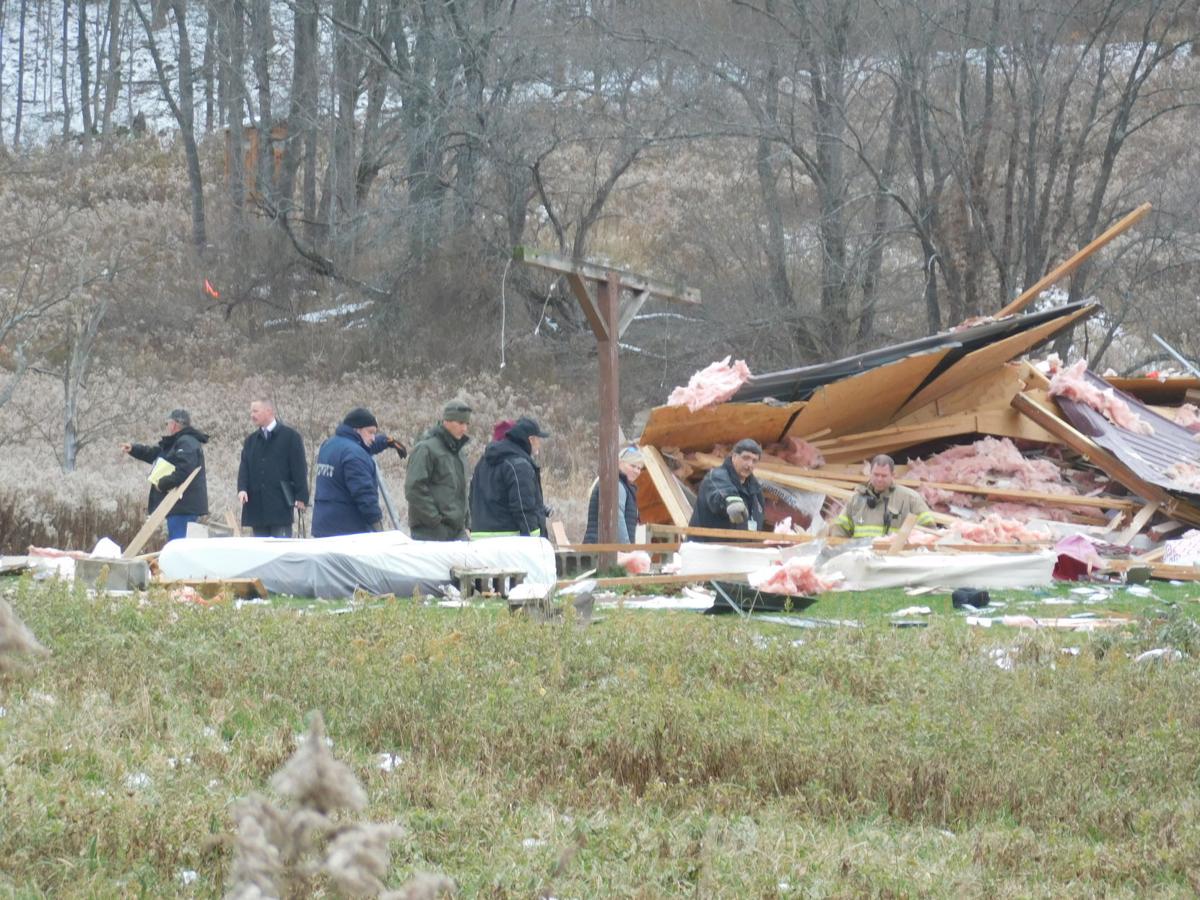 Emergency personnel and investigators are shown at the site of the Volz home on West Branch Road in Allegany after it exploded for unknown reasons on Nov. 18, 2019.

Ron and Betty Jo Volz are shown with their dog, Hemi, at their current home in the village of Allegany, where they moved after their former house on West Branch Road was destroyed by an explosion Nov. 18, 2019.

Emergency personnel and investigators are shown at the site of the Volz home on West Branch Road in Allegany after it exploded for unknown reasons on Nov. 18, 2019.

ALLEGANY — In the past year, there isn’t a night that has gone by that Ron Volz doesn’t think about the Nov. 18, 2019, explosion that leveled his former home on West Branch Road.

Over the past 12 months since that day, Volz and his wife, Betty Jo, were provided another home to live in by a generous family, attended town of Allegany meetings to speak to officials and continue to seek answers to what caused the explosion in an area with new oil well drilling.

Meanwhile, New York State Department of Environmental Conservation (DEC) officials said the investigation is ongoing at the wells near the former Volz residence. In addition, the agency is conducting monitoring of oil operations in that area.

The 9:43 a.m. explosion, the force of which rocked a neighboring house across the road and was felt for miles around, took place after Betty Jo had left for work and a short time after Ron left to go deer hunting. Upon returning to their property, the couple panicked until they found their Boston terrier, Hemi, safe and unharmed after the dog had been left alone at the house.

In the days and weeks to follow, the issue and concern expressed by the couple, as well as neighbors of the rural West Branch and Four Mile road areas, was the safety of their homes and well water in light of the ongoing drilling behind the homes. Some expressed belief that the explosion could be directly linked to the drilling of oil wells by Dimes Energy, which has been ongoing in that area. Company officials had stated that as many as 400 oil wells could be drilled throughout the hilltop areas above the homes.

A message left with Dimes’ local attorney, Eric Firkel, seeking comment was not returned to the Times Herald.

Ron Volz spoke recently of some of the good fortune he and his wife experienced over the past year, such as purchasing a home that two families had initially opened up to them, and the overall kindness of the community. Located in the village, the location of the house is a little too noisy with traffic for Ron, who is an outdoorsman, but his wife likes their new home.

“I love the house — now, if we could just pick it up and set it someplace else,” she said jokingly.

Ron said they had lived in their former house 36 years, but are uncertain if they can ever rebuild and return to the property.

“We’re not even sure of the land and if we could rebuild there,” he said. “And, right now, we’re not sure if (an explosion) can happen again.”

Volz, who is seeking legal advice, said he hopes the cause of the blast will eventually be revealed. Until then, he continues to visit his old property when DEC crews are investigating wells near his old homestead.

Volz said the loss of their former home, and memorabilia that includes a lifetime of photos, has been “tough … we try not to think about it.

“We had just put $20,000 into (the house) 14 months before it blew up,” he added, noting they still pay taxes on the property. “It’s just the idea that something happened and (nobody) knows what it was. … It’s hard, but we thank the good Lord we didn’t get killed.”

Allegany Town Supervisor Jim Hitchcock said he had received very little information on the status of the oil operations in that area.

“I had talked six months ago or more with the DEC and it was a very short conversation,” Hitchcock said of a DEC official. “He said if anything new came up they would try to keep the town informed. I have heard nothing else all year, not a word.”

TJ Pignataro of the DEC’s office of communications for Region 9 in Buffalo provided an update from the agency:

“The (DEC) is overseeing an investigation of three previously plugged oil wells closest to the former Volz residence. Methane detection was recently performed on the former Volz water well and no gas was detected. A rig is on the first of the three previously plugged oil wells, and each well will be re-entered to evaluate down-hole conditions. The wells will be re-plugged upon completion of this evaluation. DEC is continually monitoring these rig operations and the investigation is ongoing.

“DEC communicates regularly with Dimes and conducts frequent inspections of Dimes’ wells,” the statement continued. “Dimes is drilling additional wells in the area, but not on properties contiguous to the West Branch or Four Mile Roads. Dimes has permits to drill 17 more wells. DEC will continue to strictly oversee permitted operations in the area.”

Judy Capozzi, a resident of Four Mile Road, offered the perspective of neighbors in the area. She noted that she continues to see oil tankers traveling with loads from the wells.

“But it’s not as much as it was in the beginning” of drilling operations in the area, Capozzi said. “I think it’s partially because of the weather that we’re not having the mud (on the roads) that we did the first year. I also think with the pandemic, everything has totally slowed down.”

Capozzi, as well as Ron Volz, said they have heard from neighbors who continue to have water issues with their wells.

“But, thankfully, they’re doing that,” she said of DEC trying to see if the wells are linked to the blast. However, she said, “It’s a long time coming.”