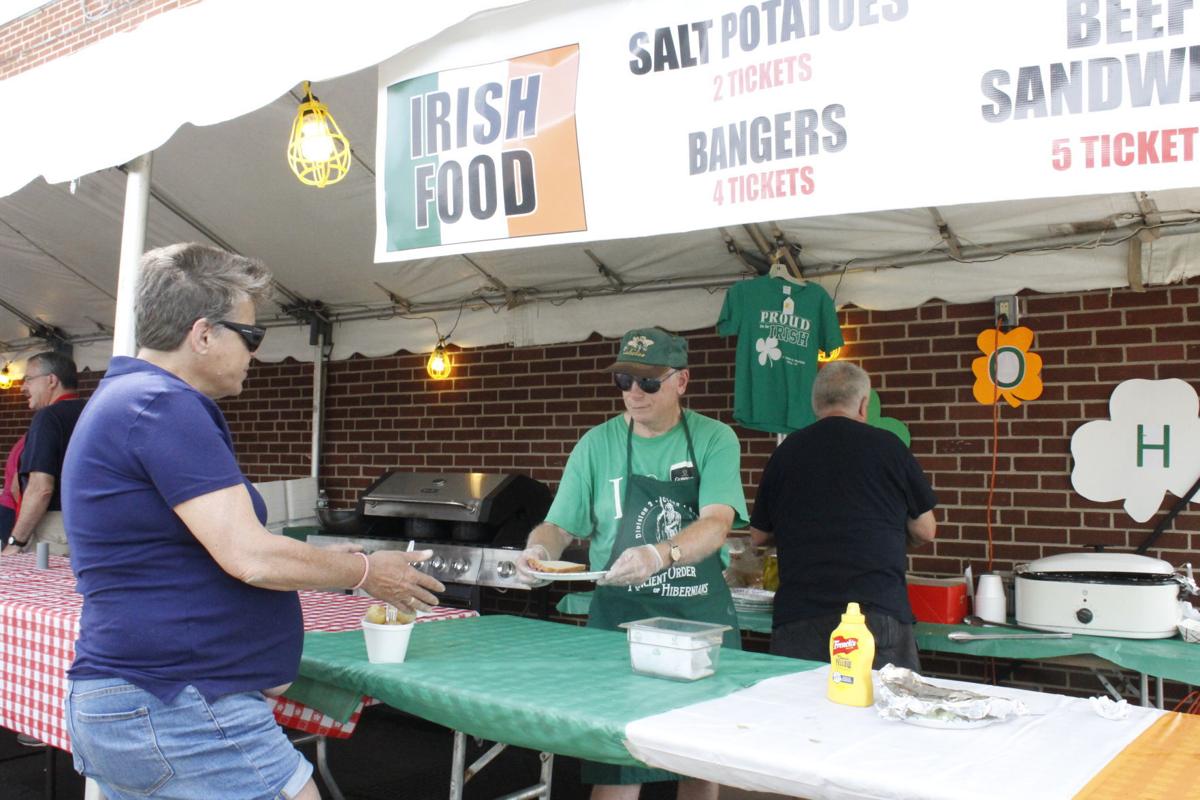 Becky Field of Olean orders the bangers and salt potatoes as the Ancient Order of Hibernians serve up Irish favorites during their first year at the St. John’s Church Festival Saturday. 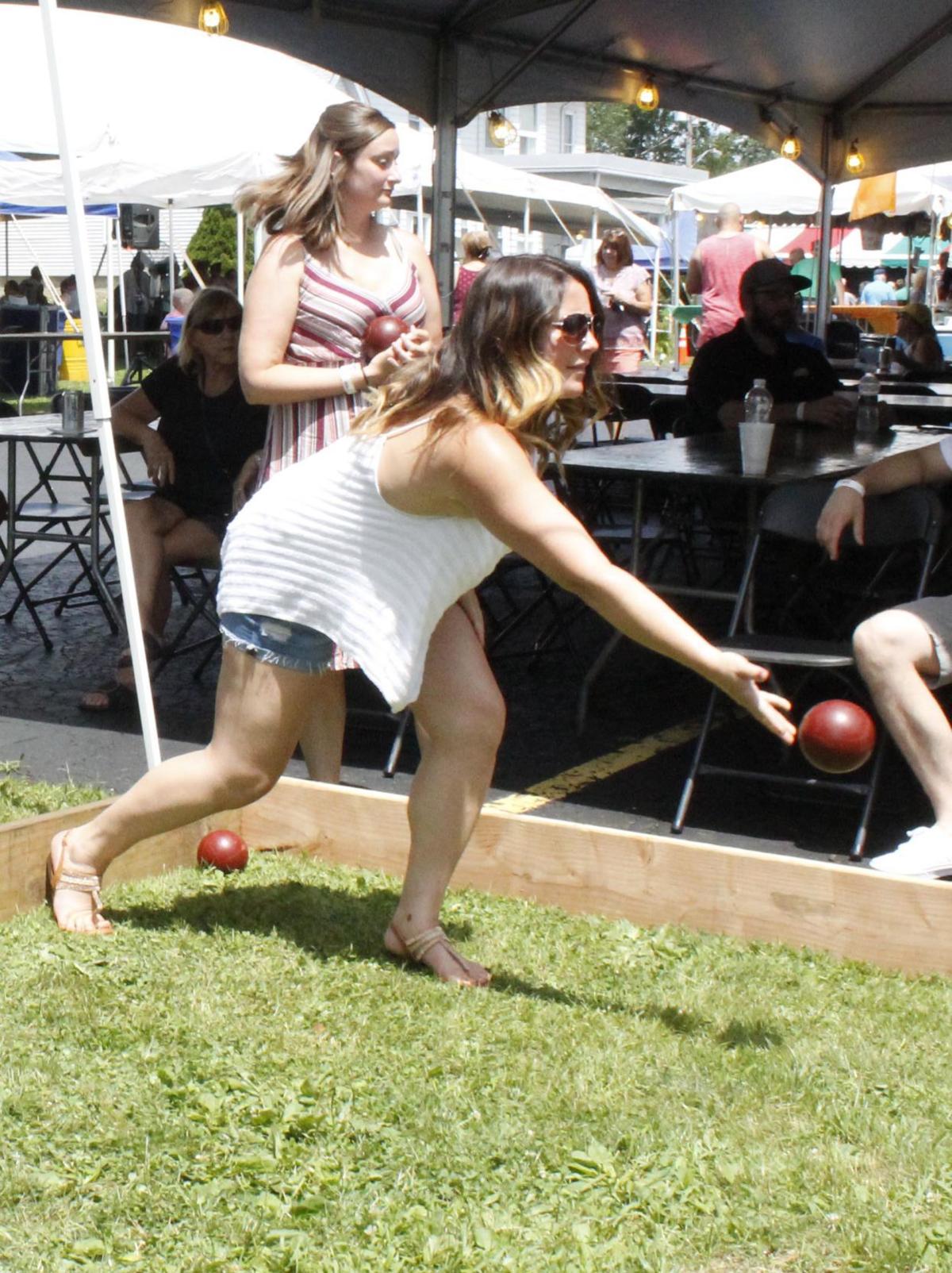 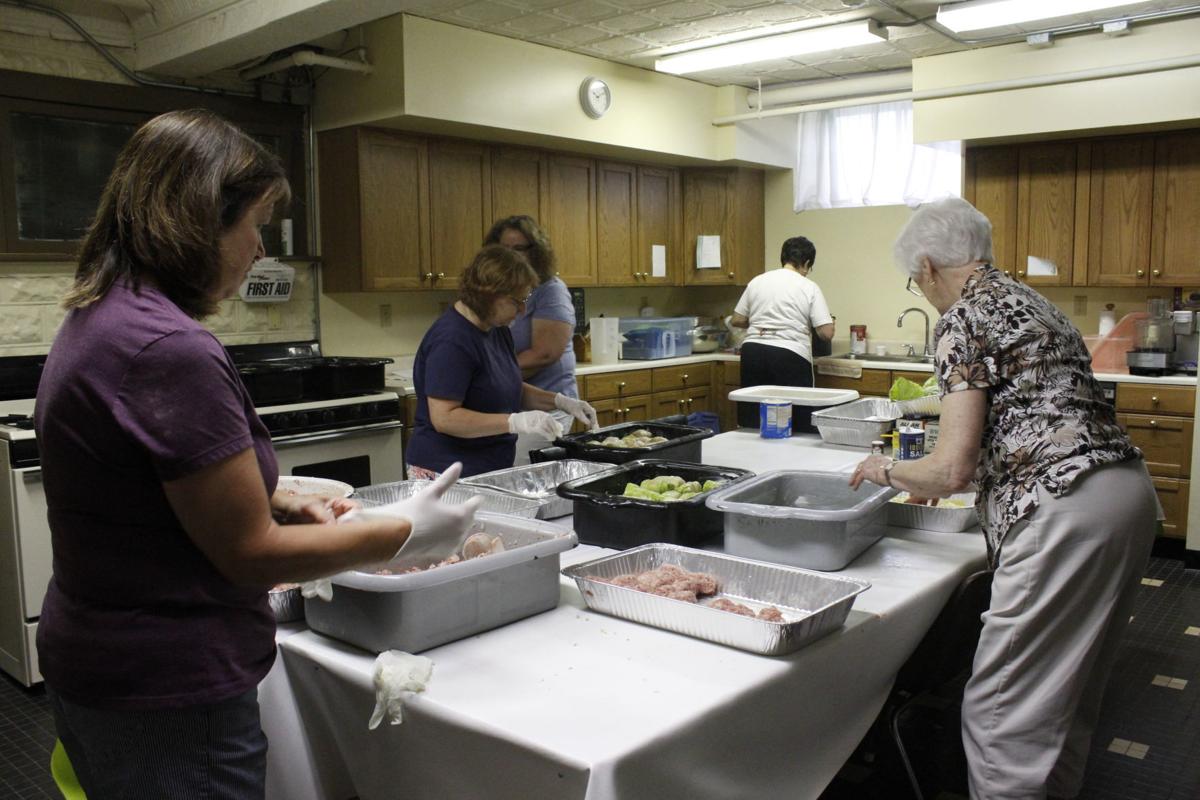 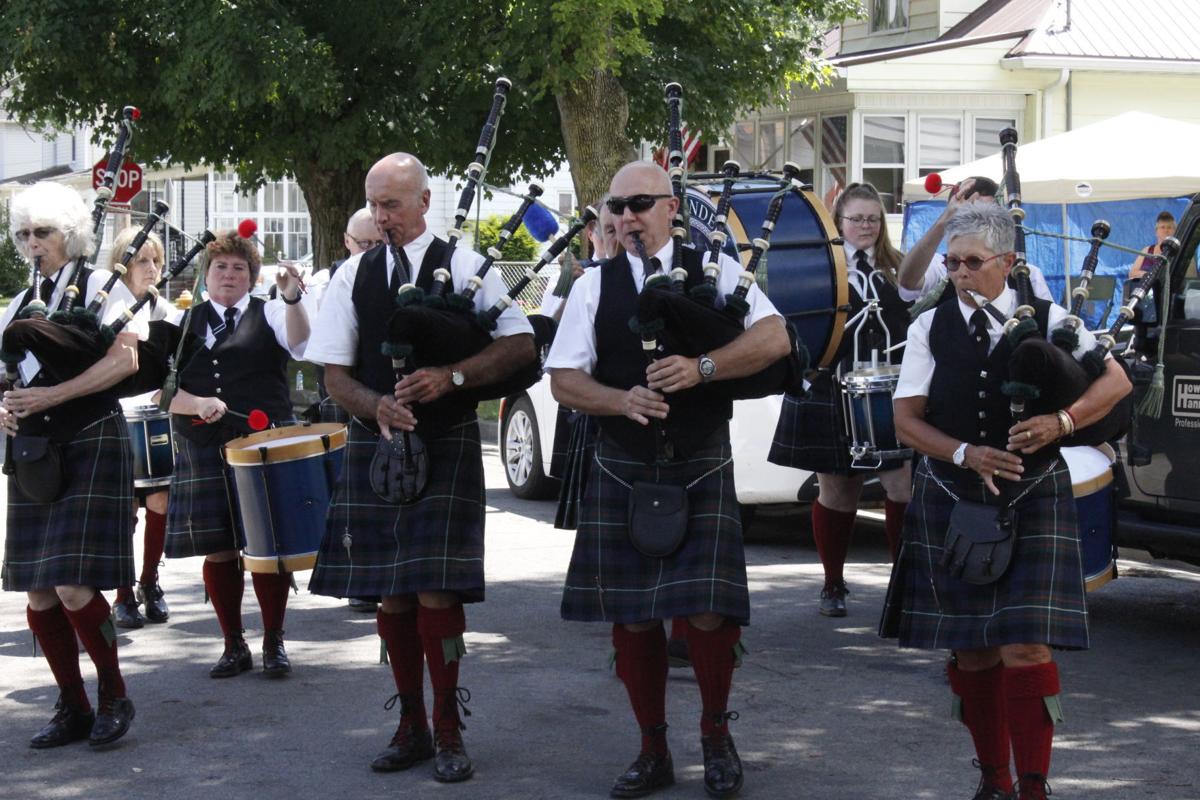 Members of the 96 Highlanders Drum and Pipe entertain the crowd Saturday at the St. John's Church Festival. 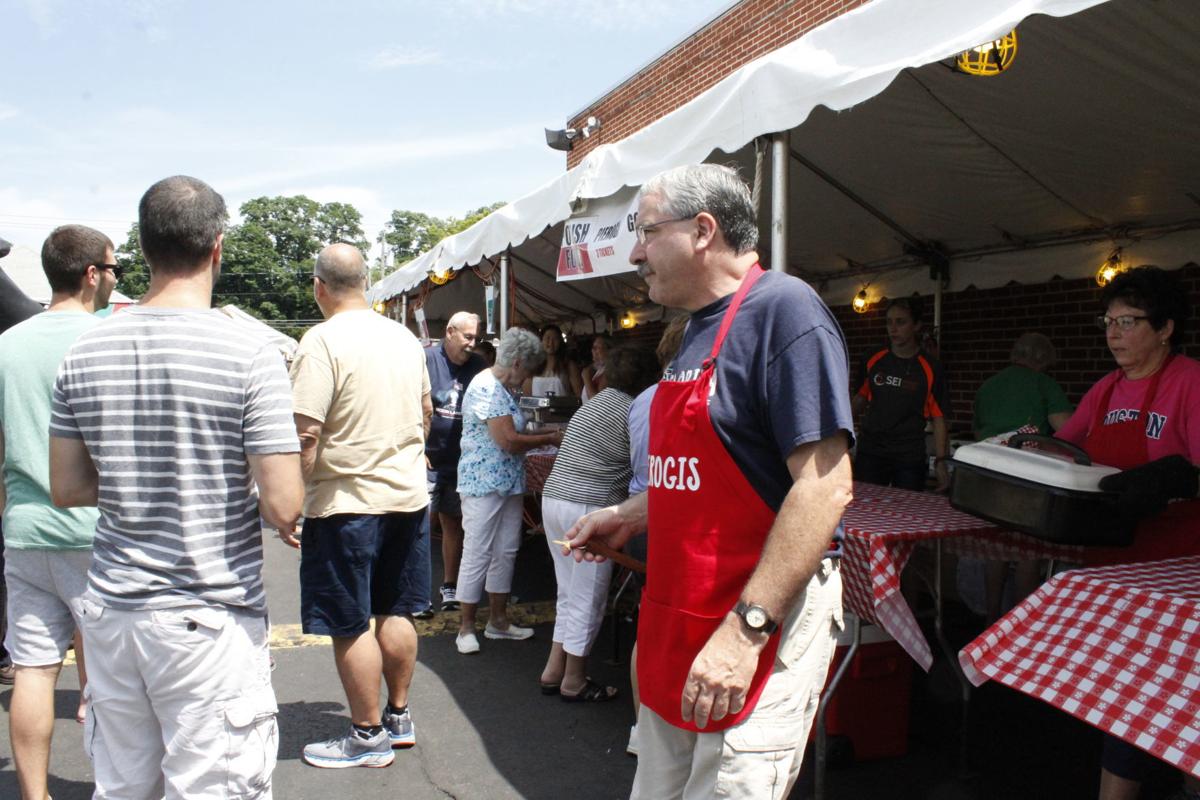 People lined up along the Italian, Polish and Irish food offerings at the St. John's Church Festival Saturday. 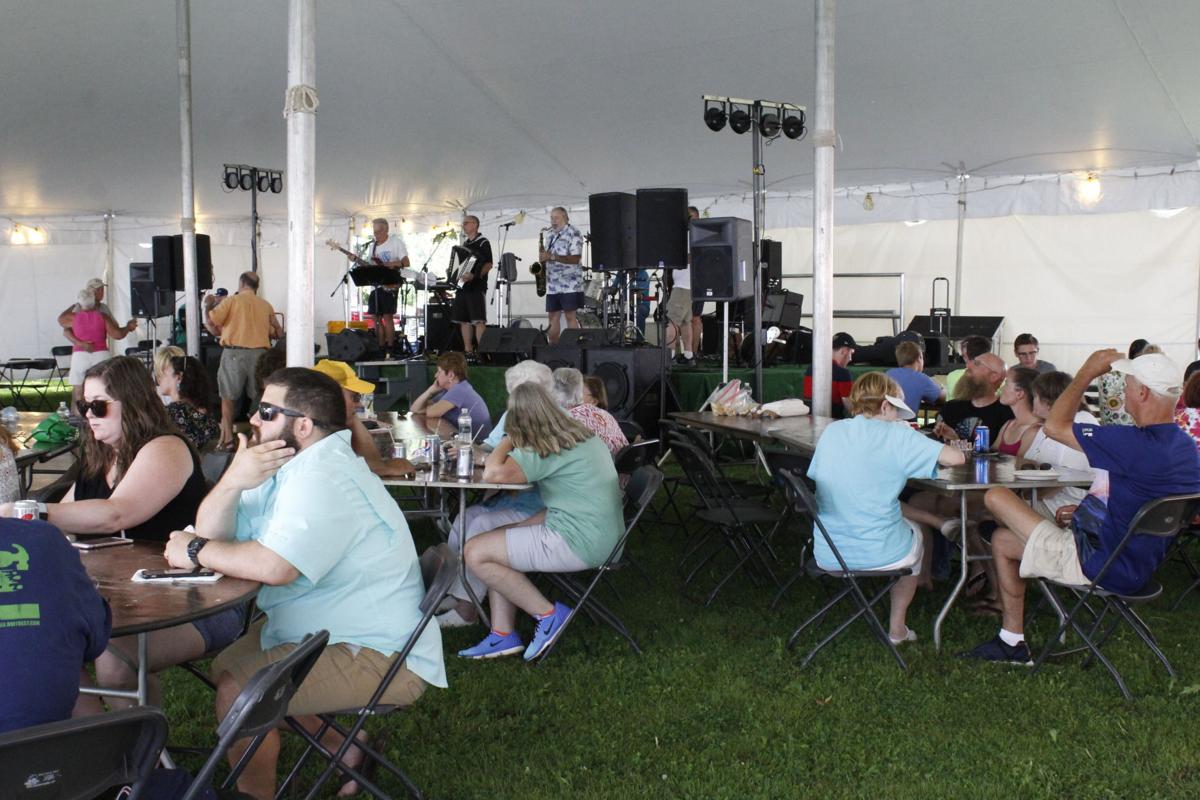 Tables were full under the tent Saturday afternoon as festival goers enjoyed the Italian, Polish and Irish fare offered at the St. John's Church Festival and listened to the Larry Lewicki Band. 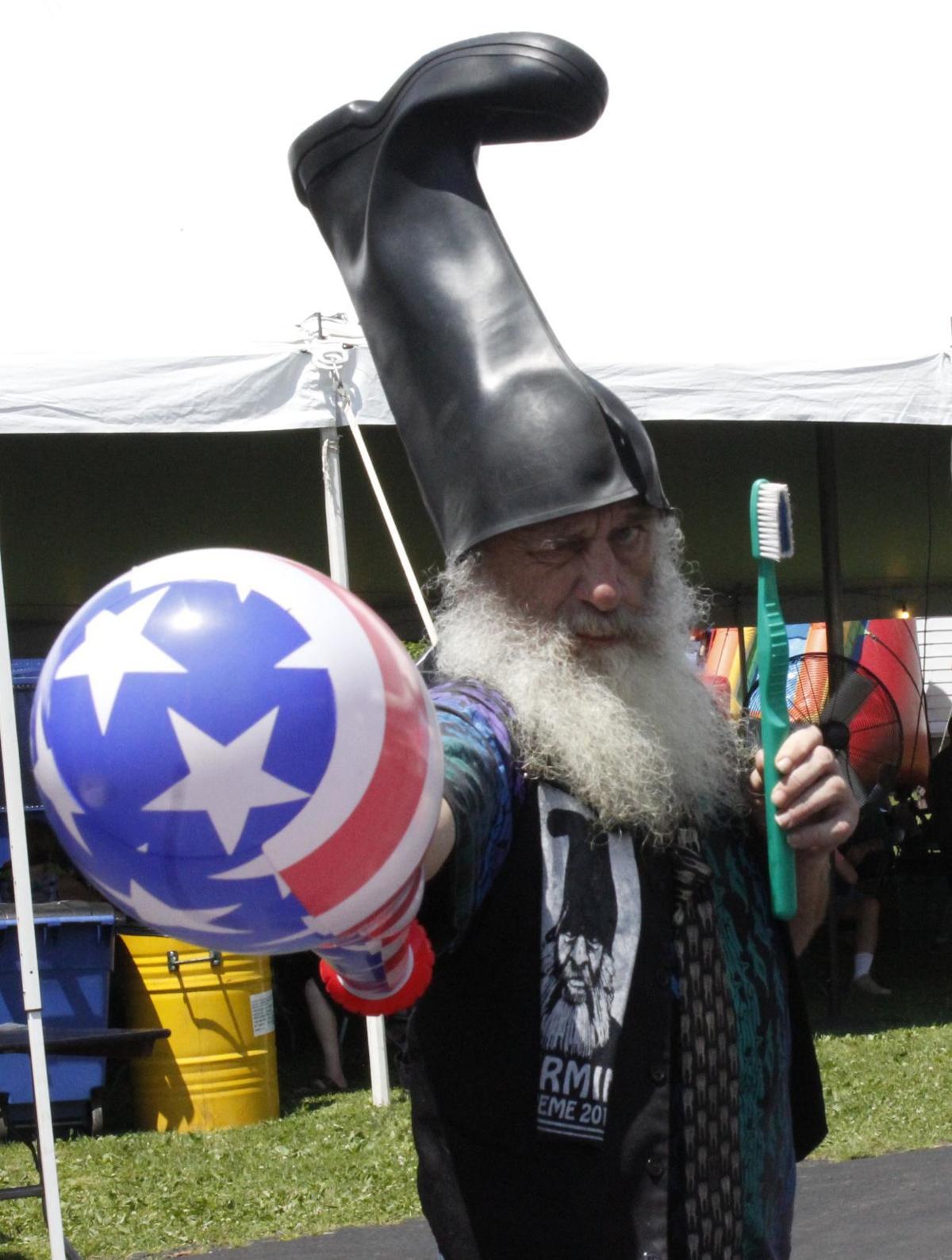 Vermin Supreme, a performance artist and activist from Baltimore, Md. who hopes to be the Libertarian Party choice for president next year, was in attendance at the St. John's Church Festival Saturday.

Becky Field of Olean orders the bangers and salt potatoes as the Ancient Order of Hibernians serve up Irish favorites during their first year at the St. John’s Church Festival Saturday.

Members of the 96 Highlanders Drum and Pipe entertain the crowd Saturday at the St. John's Church Festival.

People lined up along the Italian, Polish and Irish food offerings at the St. John's Church Festival Saturday.

Tables were full under the tent Saturday afternoon as festival goers enjoyed the Italian, Polish and Irish fare offered at the St. John's Church Festival and listened to the Larry Lewicki Band.

Vermin Supreme, a performance artist and activist from Baltimore, Md. who hopes to be the Libertarian Party choice for president next year, was in attendance at the St. John's Church Festival Saturday.

OLEAN — The smell of Italian, Polish and Irish foods greeted hundreds Saturday for the 37th annual St. John’s Church Festival, with attendees not letting the heat and humidity of the region stop them from attending the popular event.

“It’s great. I love it,” said Velma Ko of Toronto, Canada, who was in town visiting. She was having such a good time that she didn’t seem to mind being recruited a couple of times during the day to help serve the Polish entrees.

“It’s such a nice atmosphere. People seeing their friends, eating the food, supporting the groups and getting things done,” she said.

Food is always a crowd pleaser, and this year was no exception. What started out as a simple block party to celebrate the Italian heritage in the North End became a place for the Polish community two years ago, and this year the Irish.

The Ancient Order of Hibernians decided “to give it a try and see how it all works out,” Kip Morrow told the Olean Times Herald last week. “It’s the same amount of work if you’re planning for 10 or a thousand, and being the first year we have no idea how it’s going to go over but we strap on the boots and give it a try.”

They were happy they did. Morrow said Saturday the day was “going over so much better than they would have thought.” Dan Dougherty of Cuba, a Hibernian member, agreed.

“It’s been good but we have nothing to compare it to,” he said.

Morrow admitted to being worried the night before. But about three hours after the festival started Saturday, he said they would soon run out of the bangers, an Irish sausage, salt potatoes and corned beef sandwiches, popular items in Irish cuisine.

Several parishioners and friends gathered late in the week to prepare the festival fare. They made hundreds of meatballs, 70 dozen pierogis and cabbage rolls. The cooks weren’t sure how many cabbage rolls they’d end up with, laughing that they would have “as many as we have” — whatever 50 pounds of ground beef, 15 pounds of rice and a lot of cabbage heads would make.

Mike Barton of Olean was serving the polish entrees for the third year.

“I think everyone’s waiting for it to cool down,” he said, looking over the food lines and still good-size crowd of people sitting under the tents, where large fans and the light breeze that was blowing cooled things off a little. “Usually this (food line) is packed six deep.

Tom Mehmel of Olean took the opportunity to brag a little about the pierogis. He said the Rev. Joseph Bertha, who left Olean in 2012 and had trained for his doctorate in Eastern Europe, told his parishioner pierogi-makers of St. Mary Byzantine Church that theirs were, literally, the best he’d had in the world.

Italian fare, with the popular food dating back to that original St. John’s Festa Italiana, included meatballs, pizza, polenta, beans and greens, risotto and pasta, like ziti and broccoli and pasta fagioli.

Of course the ever-popular Italian desserts were present at the gala. Cannolis were stuffed with 50 pounds of ricotta. Pizzelles and biscotti were enticing, and new this year was the inclusion of bow ties.

Parishioner-made baked goods were available once again, as they were a few years ago. Organizers were hoping to stave off the crush of dessert-lovers who last year, scooped up all the sweet treats by 5 p.m. It may have been for naught.

“We sold a lot,” said Judy Palumbo, who was manning the bake sale. “We’re almost out of the anise pizzelles already.” They started with 65 bags of the popular Italian cookies that were available in three flavors, and had four bags left an hour and a half into the festival.

It wasn’t all about the food, as there were activities available for almost everyone.

The popular Francis Week Rogers Bocce Tournament was held once again, as it has every year since the festival’s inception, with contestants playing throughout the day.

Mark Baker from Eagle Dream Rehabilitation was on hand to showcase six of the nonprofit organization’s raptors, including barred, horned and screech owls.

Of course it wouldn’t be the year before a big election if politicians weren’t there. Vermin Supreme, a performance artist who is campaigning to be the Libertarian nominee for president next year, was busy entertaining the crowd and telling people about his political philosophy — all while wearing his iconic boot for a hat. Joining him were the chair and vice-chair of the Cattaraugus County Libertarian Party, Luke Wenke and Matt Peterson-Volz.

Children’s activities and games were also expanded this year with a merry-go-round, a bounce house, a scramble and face painting. Amusement rides kept the little ones busy as they could ride all day and into the evening.

Live music kept everyone entertained as the Larry Lewicki Band began the festivities, followed by The Wild Rovers and Freddy & the Jets. Irish dancers and DJ Hendryx kept the crowds entertained between bands. Nerds Gone Wild, a Buffalo-based audience-participation musical group, finished the event as they have in prior years.

Members of Jamestown’s 96 Highlanders Pipes & Drums were on hand, seeming to delight the crowd after their march into the musical stage area Saturday afternoon. They were invited by Father Pat Melfi, said Doug Clark of Harbor Creek, Pa., a drummer with the group.

Another change this year was the chance to win twice as much as the typical pot the festival has ever offered, with a first prize of $10,000 and the remaining $10,000 distributed at lesser amounts.