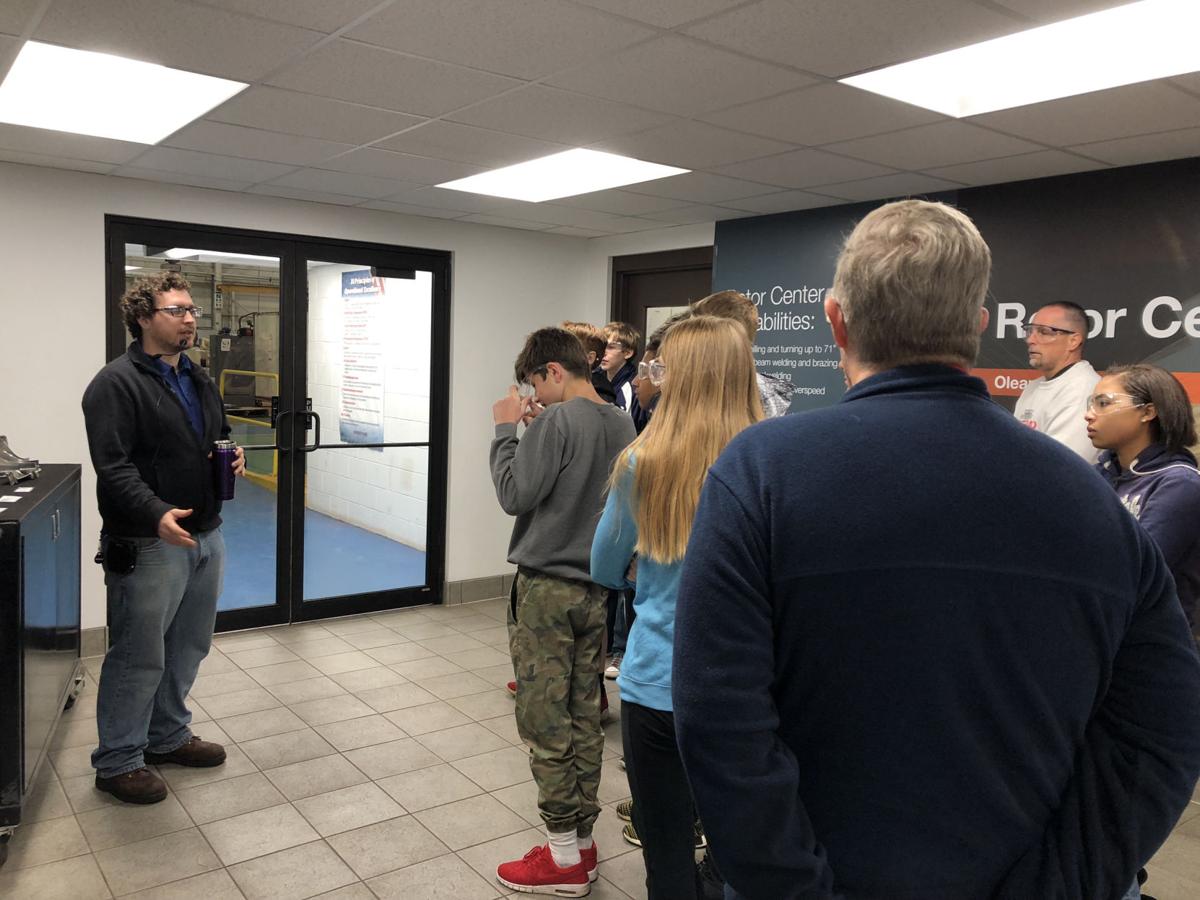 Sean Frier, manufacturing engineer at Dresser-Rand, shows Olean High School freshmen around their facilities as part of Dream It Do It Western New York’s Manufacturing Day. 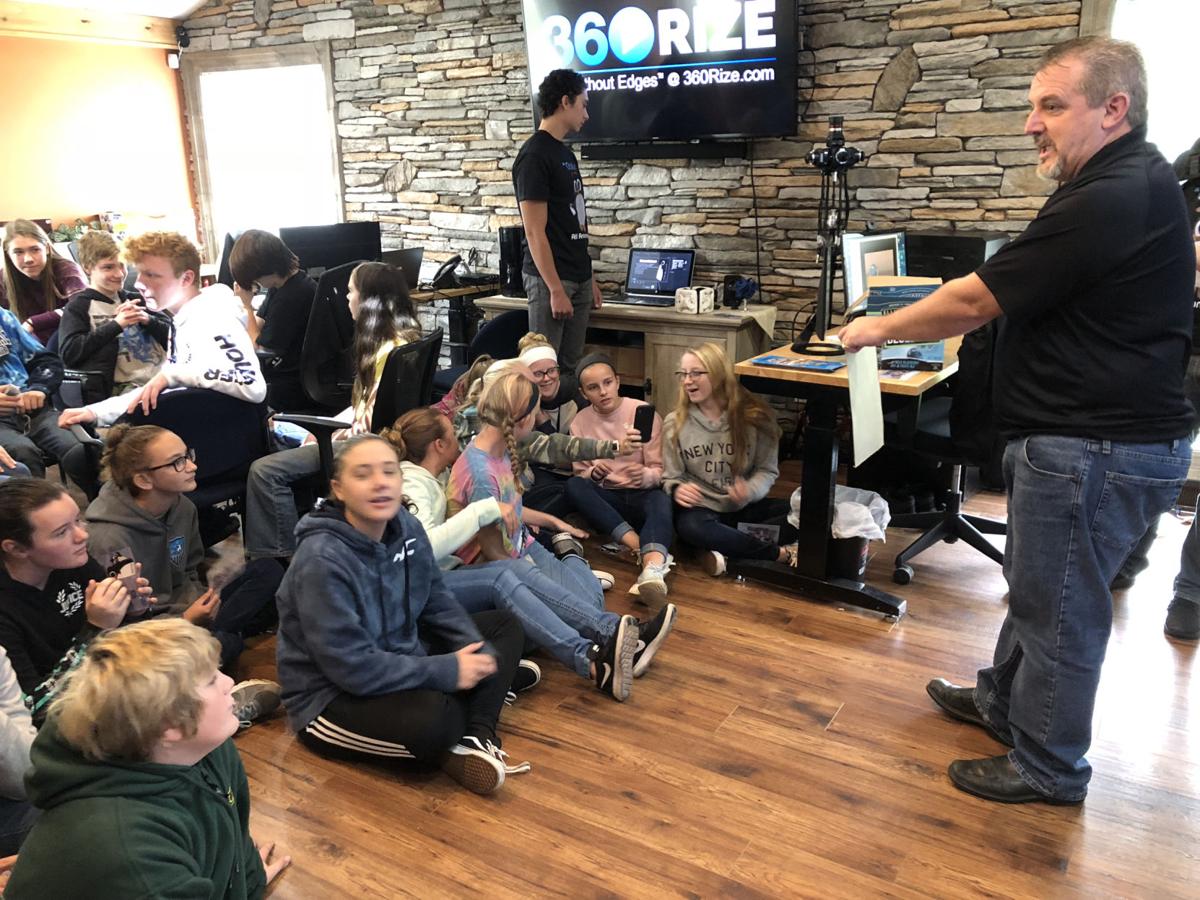 Sean Frier, manufacturing engineer at Dresser-Rand, shows Olean High School freshmen around their facilities as part of Dream It Do It Western New York’s Manufacturing Day.

OLEAN — Students from all over Cattaraugus County spent the day Friday exploring the ways that innovative, exciting and impactful careers can be pursued in the fields of science, technology, engineering and math, or STEM — all without leaving the area.

Local opportunity was the emphasis of organizers and manufacturers alike for the annual Manufacturing Day organized by Dream It Do It Western New York (DIDI-WNY), which aims to promote careers in STEM fields.

Evelyn Sabina, program coordinator for DIDI-WNY, said that nearly 800 students were scheduled to tour 21 companies. The goal of Manufacturing Day, now in its seventh year in Olean, is to “open the door to teachers and students; make them aware of what’s available in terms of careers,” Sabina said. “We want to expand a manufacturing pipeline for Olean.”

Eighth-graders from Cattaraugus-Little Valley Central School received a demonstration of new technology developed at 360RIZE, and were particularly impressed with a new augmented reality application for smartphones that can blend the real world with animated overlays to bring graphics — such as those on postcards, cereal box covers or even 360RIZE’s new augmented reality bus — to life.

“They were blown away. When I showed them the lively labels, you could not keep them quiet,” said Michael Kintner, CEO and founder of 360RIZE.

Kintner tried to impress upon the students the potentially global nature of work being done right here in Olean.

“We like to inspire people to use virtual reality worldwide,” he said. “The stuff we’re doing today is going to be used in the future. We’re located in Olean, New York, and we’re working with all of these companies all over the world.”

After an introductory discussion, the students were led through the old foundry on their way to the rotor cell manufacturing building.

“I used to avoid coming through here (the foundry), but now it’s like seeing manufacturing in the 1940s, and then they get to see manufacturing in 2018,” said Chris Scott, director of engineering.

Several Dresser-Rand employees, all from local schools, spoke to the students and outlined the variety of career options available to suit many interests.

Pomerantz Law Firm Announces the Filing of a Class Action Against Danimer Scientific, Inc. and Certain Officers and Directors - DNMR

Scott, who graduated from Portville Central School and interned at Cutco, but was resigned to moving away from the area to pursue a career in engineering before discovering Dresser-Rand, said he wishes Manufacturing Day existed 20 years ago. “I had no idea it existed,” he said.

Scott likes to bring all students in for the tours, whether or not they have expressed an interest in STEM fields. “You never know what might spark their interest.”

The effort to keep kids in the area is something that Chris Napoleon, president and chief engineer at Napoleon Engineering Services, is passionate about.

“People like to live in the general area where they grew up,” Napoleon said. “We recruit more people born and raised in this area. I have very little interest in recruiting someone from Albany or Rochester because they will want to go back to their hometown.”

“What’s interesting is the whole intent of our mission (for Manufacturing Day) is to develop a pipeline for students into careers in manufacturing.” He added that the personal contact with students is important in accomplishing that mission. “Not one or five or 10 (students). 800 will have contact. It’s very effective.”

The efforts seem to be bearing fruit, as Napoleon pointed out a number of former participants in Manufacturing Day that have corresponded with him, keeping him apprised of their progress in STEM fields.

He also has discovered “no shortage of internship candidates from our area, directly a result of Dream It Do It.”

The primary benefit of events like Manufacturing Day is that it alerts local students to options and opportunities at an early stage in their education. Ideally, these young people will not only develop an interest in engineering and manufacturing careers, but also recognize the potential of their own community.

“This county is a model for the entire nation,” Napoleon said, “but you can’t engage youth when they’re 21 or 27. You have to reach them when they’re young.”