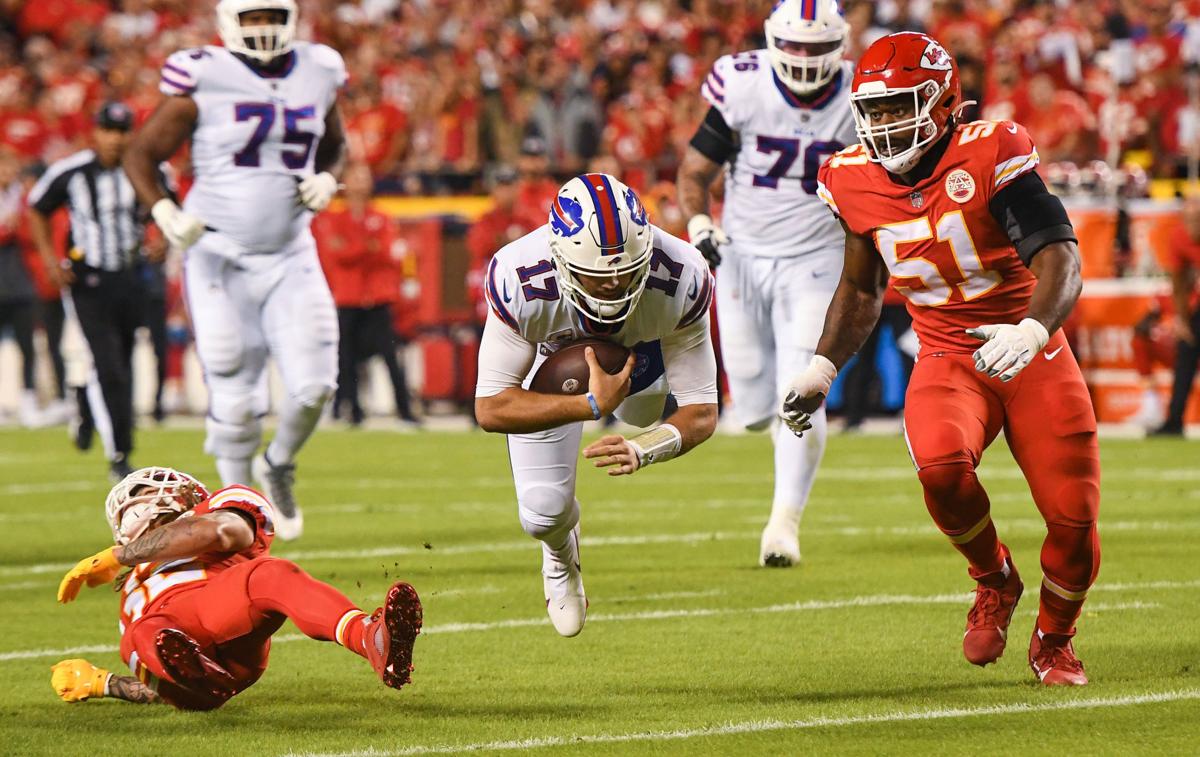 Buffalo Bills quarterback Josh Allen gets tripped up on a run in the first quarter by the Kansas City Chiefs defense Sunday, Oct. 10, 2021, at Arrowhead Stadium in Kansas City, Missouri. 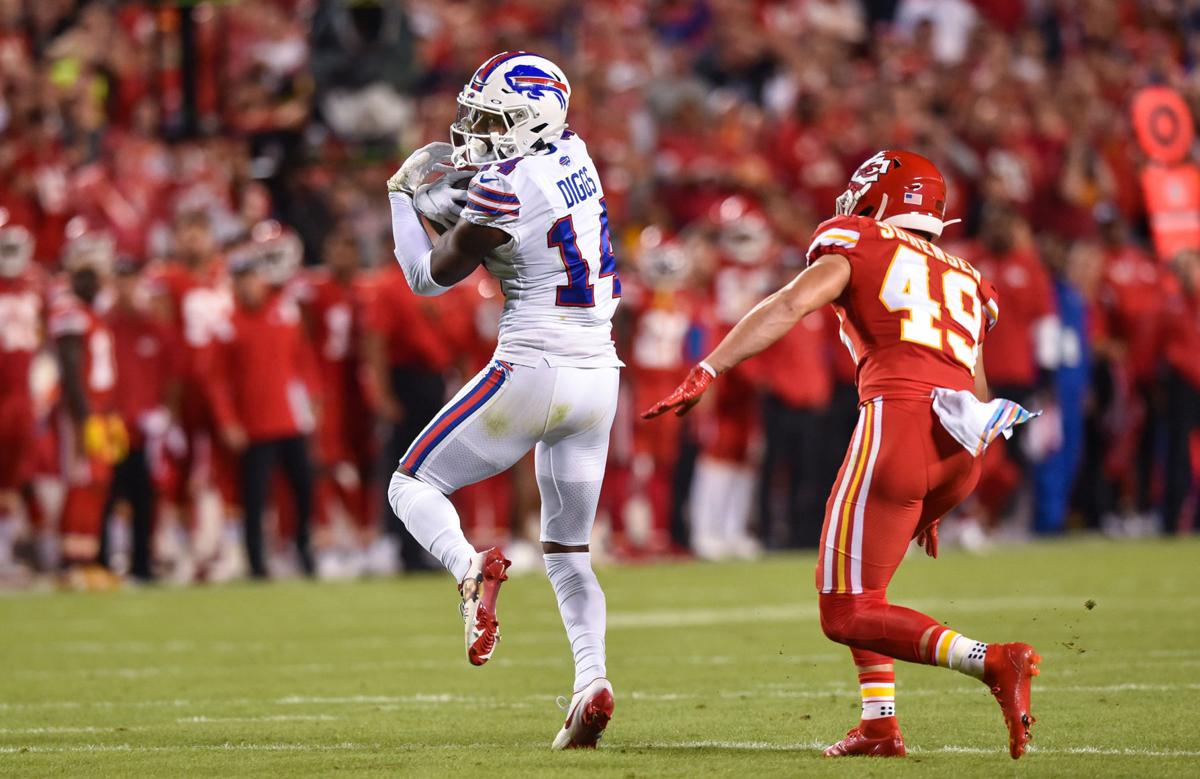 Buffalo Bills quarterback Josh Allen gets tripped up on a run in the first quarter by the Kansas City Chiefs defense Sunday, Oct. 10, 2021, at Arrowhead Stadium in Kansas City, Missouri.

KANSAS CITY, Mo. — Bills quarterback Josh Allen scrambled to the left on the mushy turf in Arrowhead Stadium, saw the Chiefs defensive back go low for the tackle and made like an Olympian by leaping over him for a first down.

Apropos as Buffalo finally cleared one of its biggest hurdles in the AFC on Sunday night.

Allen threw for 315 yards and three touchdowns while running for another score, Micah Hyde returned a rare pick by Patrick Mahomes 26 yards for a TD of his own, and the Bills rolled to a 38-20 victory over Kansas City in a conference title game rematch that was delayed more than an hour by lightning.

"I think this is going to be made a bigger deal than it is. We're in Week 5," Allen said. "Four wins doesn't get you to the playoffs. We ended up with a win. That's our goal each and every week, to come out and be resilient through lightning delays. I'm proud of how our team handled the situation."

Emmanuel Sanders had two TD catches for the Bills. Dawson Knox had 117 yards receiving and the other one.

"We're going to enjoy it on the plane back. You can tell I'm enjoying it out there; I lost my voice screaming," Sanders said, "but at the same time, it's not like we won the Super Bowl. It's Week 5. We have to get back to work."

Mahomes finished with 272 yards passing and two touchdowns to go with two interceptions and a lost fumble — three of his team's four turnovers in all. Mahomes also wound up being the leading rusher for the Chiefs (2-3) with 61 yards as they struggled to get going offensively against a brutally difficult Buffalo defense.

It didn't help that running back Clyde Edwards-Helaire left with a knee injury early in the second half. Travis Kelce also left in the closing minutes after taking a blow to the head on an incomplete pass.

Still, the Chiefs had closed to 31-20 early in the fourth quarter when Rashad Fenton picked off Allen's pass on a third-down jump ball near midfield. But Chiefs defensive end Frank Clark was called for roughing the passer, giving the Bills the ball and a fresh set of downs, and they marched downfield for the clinching touchdown.

The game had been hotly anticipated since January, when the Chiefs romped past Buffalo on their way to the Super Bowl, largely because it promised to once again showcase two of the AFC's best offenses in prime time.

The problem for Kansas City? It also has one of the worst defenses.

Allen only completed seven passes in the first half. They went for 219 yards and two scores.

"They're embarrassed by it," Chiefs coach Andy Reid said of the defensive performance. "We have to do better."

The Chiefs were fortunate to trail only 24-13 at halftime, when lightning lit up the sky and sent fans scurrying for the concourses. The Bills had begun to warm up but were pulled off the field for what became an hour-long wait.

Things didn't get a whole lot better for Kansas City when the game finally resumed.

After the teams traded punts, Mahomes slung a bullet that bounced off Tyreek Hill's hands and right to Hyde, who had nothing but mushy green field in front of him. He returned it 26 yards for his first career pick-six.

The Chiefs quickly drove into the Buffalo red zone on their next possession, but Mahomes threw a pass that Greg Rousseau batted at the line of scrimmage. The rookie defensive end managed to corral it for another interception.

"We knew we were going to take some punches coming out," Hyde said. "We had to weather the storm, literally. And we were able to do that. We had some big takeaways in the second half that put us over the edge."

Chiefs wide receiver Josh Gordon was active for the first time. He signed late last month after the NFL cleared him to play following his sixth suspension. Gordon caught one pass for 11 yards but also was called for offensive pass interference.

The Chiefs' Edwards-Helaire left with a left knee injury after getting tackled following a screen pass with 8:08 left in the third quarter. He finished with 13 yards on seven carries after back-to-back 100-yard rushing games.

The Bills play in primetime again at Tennessee on Oct. 18.

The Chiefs head to Washington next Sunday.