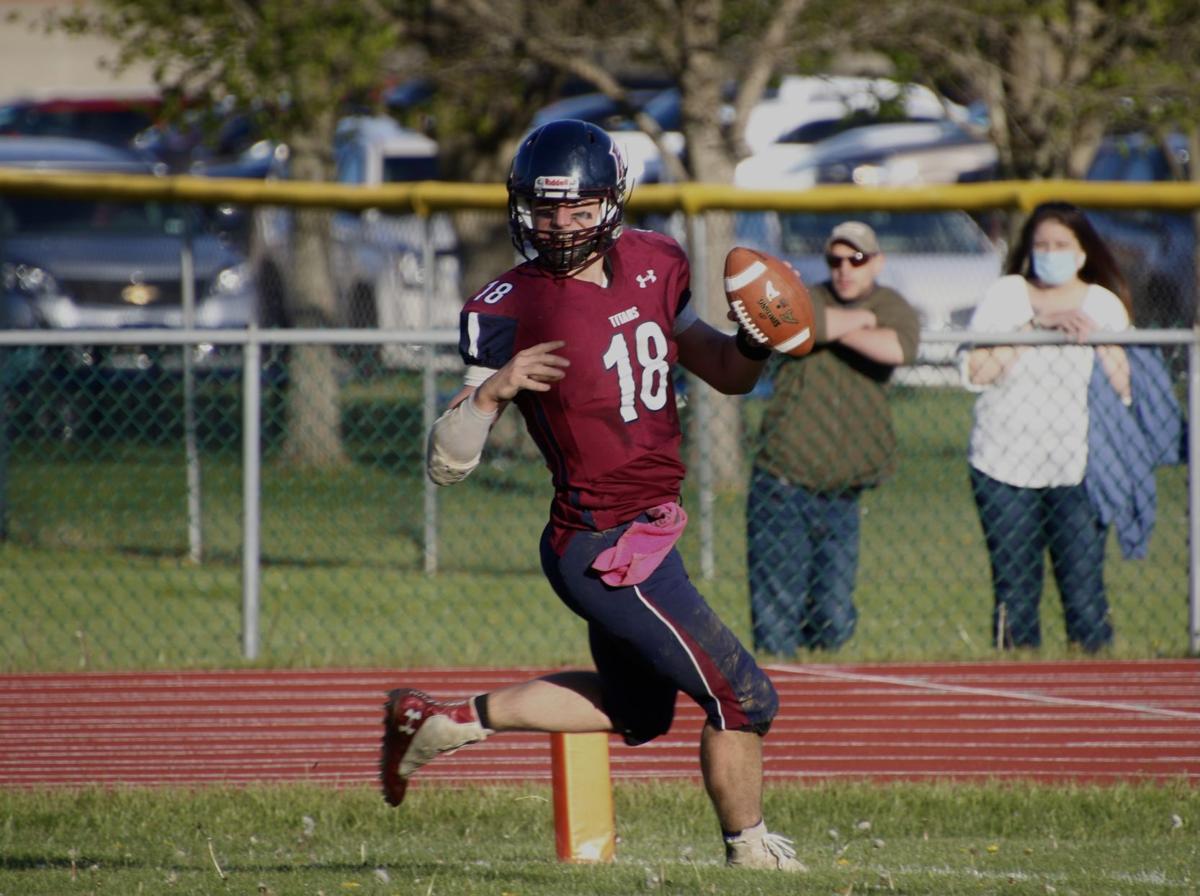 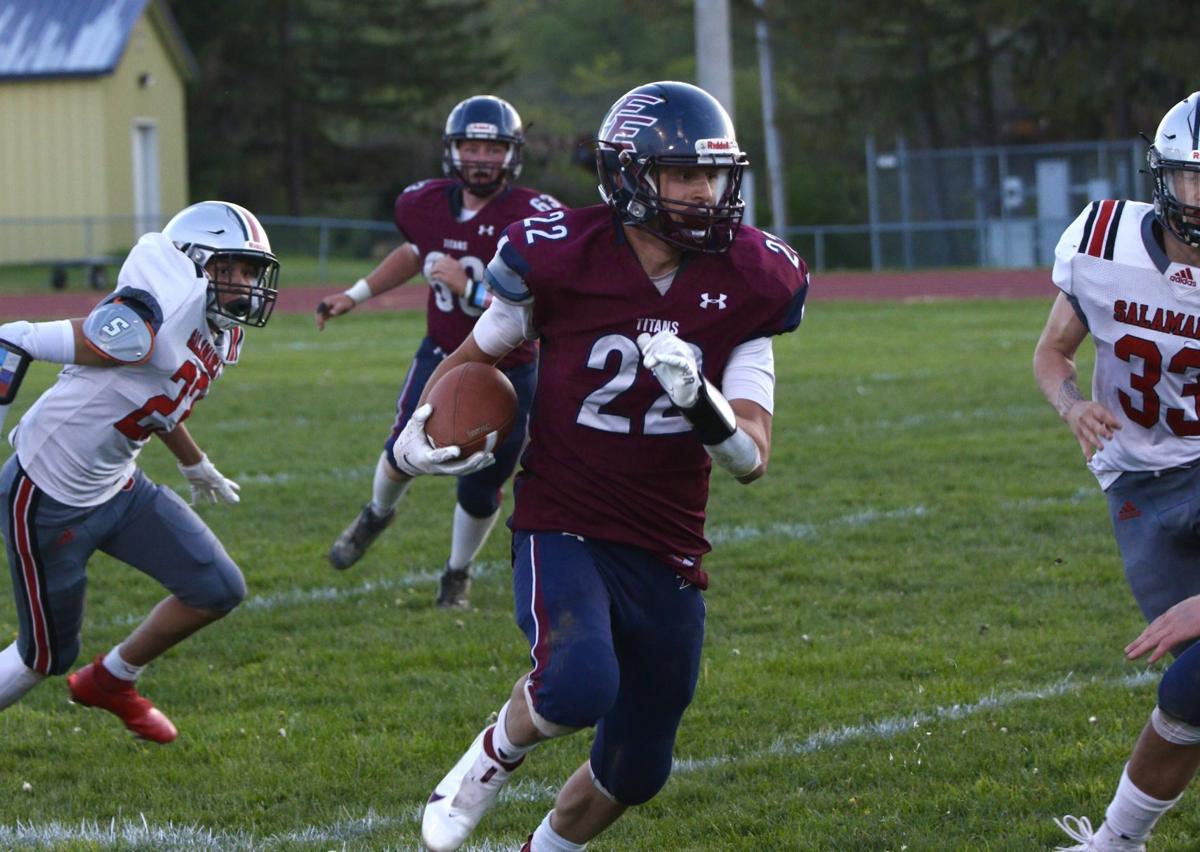 Franklinville/Ellicottville’s Clayton Rowland (22) runs up the middle past a Salamanca defenders in the Section 6 Class D championship game on Friday in Franklinville. 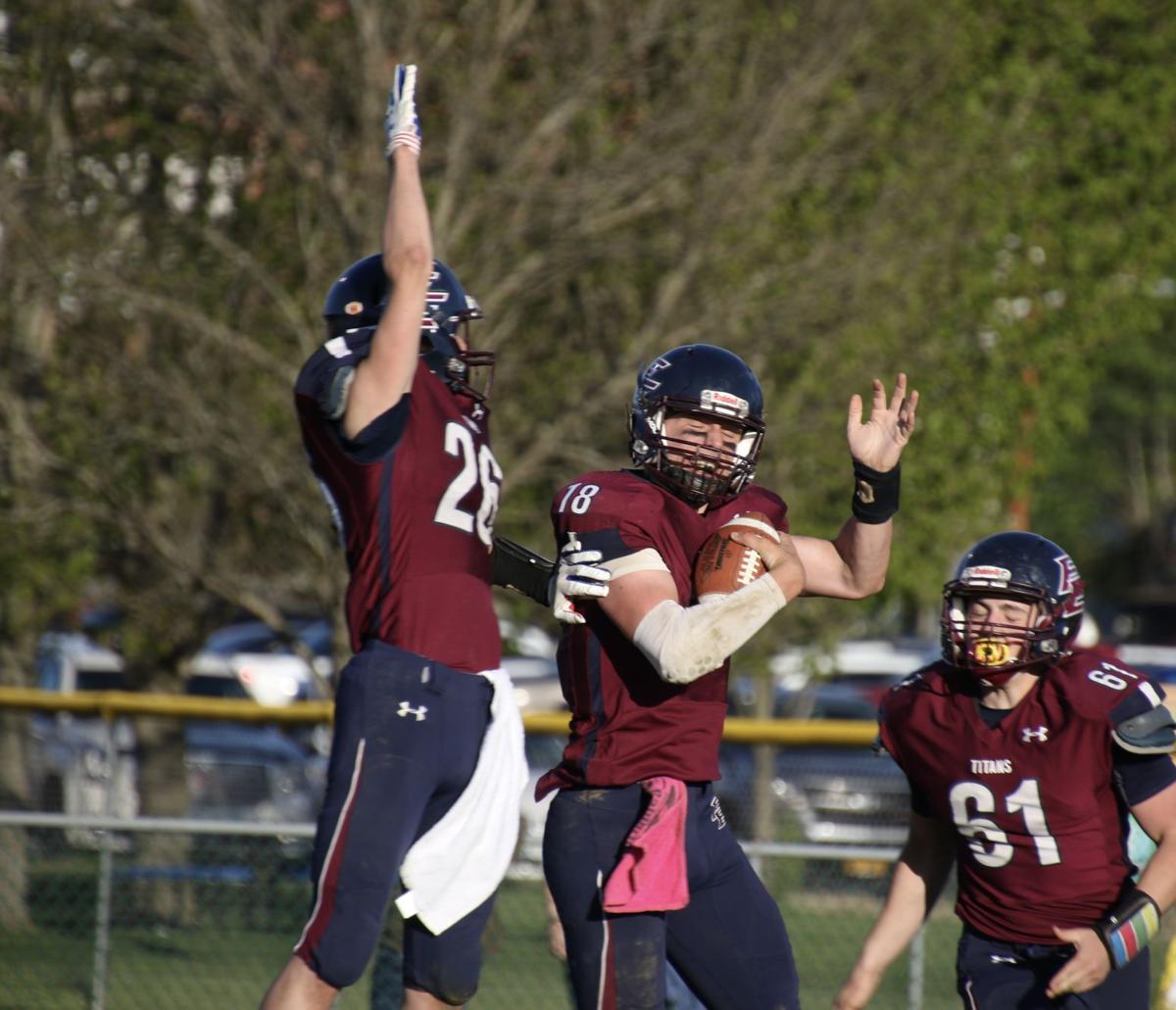 Franklinville/Ellicottville’s Clayton Rowland (22) runs up the middle past a Salamanca defenders in the Section 6 Class D championship game on Friday in Franklinville.

FRANKLINVILLE — The Franklinville/Ellicottville football seniors have had a long time to ponder some unfinished business.

Ever since Nov. 9, 2019, when the Titans lost 22-0 at New Era Field to Clymer/Sherman/Panama, F/E wanted to finish what it couldn’t last season. Finally, the Titans got that chance Friday night, and they took advantage. F/E scored three second-quarter touchdowns, powered by hard-running senior quarterback Logan Frank, to lead 21-0 at halftime and held off a second-half fight from Salamanca to win, 21-7, in the Section 6 Class D championship.

“It’s such a great feeling especially because we came up short in this game last year, and our seniors from that day said in their head that they weren’t going to let that happen again,” second-year F/E coach Jason Marsh said. “They really wanted to go out and win a championship, they didn’t like the way it felt last year. It’s a credit to those guys, a great bunch of kids. They set their goals. They fought through all the adversity through the pandemic, no weight room, no preseason training for us at all. It’s a great bunch of kids who just worked their tails off and they improved from day one until today.”

FRANK finished with 234 rushing yards and two touchdowns on 31 attempts, and was 6-of-12 passing for 75 yards and a score.

“It’s everything,” Frank said of winning a sectional title. “It was a heartbreak losing to CSP last year, obviously. We thought that was going to be our year. But with everything going on this year we were just blessed to play. This group of kids, we needed one, we deserved one. We worked so hard throughout the year and it means the world to me and the rest of our senior athletes.”

F/E (7-1) drove 13 plays on its opening drive, reaching the red zone before a holding penalty spoiled a chance at a touchdown. But that ball-possession approach set the table for much of what was to come, as F/E ran 55 plays to Salamanca’s 37, outgaining the Warriors 360-164 in total yardage and gaining 19 first downs to Salamanca’s seven.

THE TITANS broke through early in the second quarter as Frank ran 22 yards for a touchdown. They took advantage of a short field for the next score, as Lucas Marsh’s interception return and a Salamanca penalty set F/E up at the Warriors’ 13, and Frank ran for a 2-yard score. Frank found Clayton Rowland on a 36-yard pass up the middle for F/E’s third touchdown.

While F/E took two turnovers (interceptions by Logan Grinols and Marsh) in the first half, it gave up two in the second half. The first, an interception by Salamanca’s Harley Hoag, set up Salamanca’s touchdown, a 35-yard Trevor Ellis run.

The Warriors got the ball back two plays later, as Carter Stoltz fell on a fumble at the F/E 27. But F/E got a fourth-down stop in the red zone, tackling Ellis just inches short of the marker to end the Warriors’ last great scoring opportunity.

“Bend don’t break mentality, Coach (Chris) Mendell (says),” Frank said. “We knew we were in control, just with all the stupid penalties and stuff, we knew we were going get back on top. We know we’re a high-caliber team.”

A 12-play Titans drive ate up more than half of the time in the fourth quarter before a missed field goal with 4:27 to play. F/E got one more fourth-down stop before being able to finish off the win with a couple of Frank kneel-downs.

“The momentum was definitely starting to swing,” Marsh said. “But our defense, like they did all year, the defense has been really good, Coach Mendell always has the guys prepared and the defense stood on their heads and got a stop, that was huge.

F/E won its second sectional title since the schools merged for football, previously winning in 2015. Salamanca, under former F/E coach Chad Bartoszek, made its first sectional title appearance since 2001.

“You’ve just got to give them credit, they came out ready to roll and they were pumped up,” Bartoszek said of the Titans. “I think we were matching them physicality-wise, but we got out of sorts technique and scheme-wise. We just … had a couple breakdowns. We were trying and they were coming at us. We had a few things that just didn’t go our way. It’s hard to stop a team when they’re going like that. So that first half, especially that second quarter, that’s not the Salamanca Warriors we’ve seen all year, two years, it was just a bad quarter. How we responded in the second half was kind of cool, I was proud of that, but we were an inch short on a first down that would have given us a shot at the end zone ... gotta give them credit.”