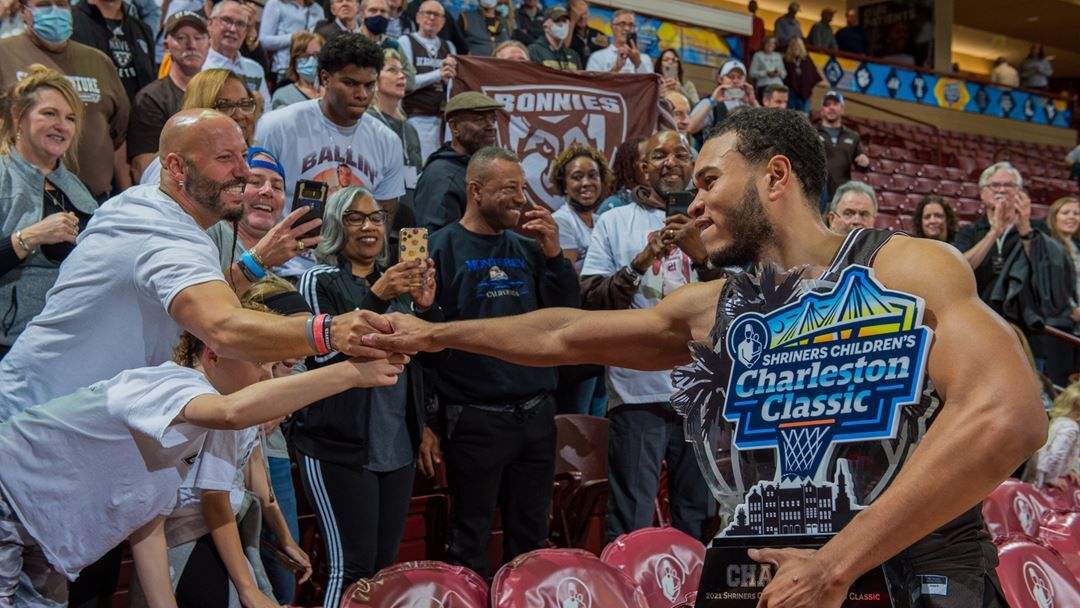 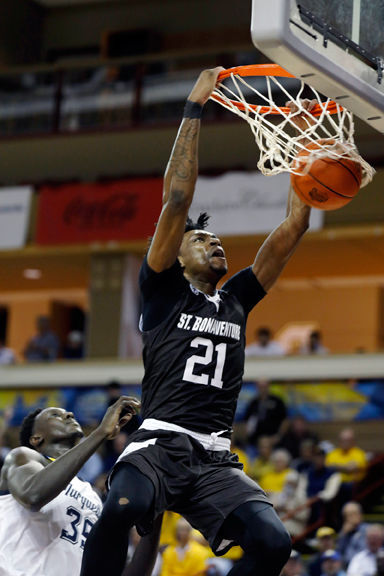 St. Bonaventure’s Osun Osunniyi (21) dunks over Marquette’s Kur Kuath during the first half Sunday at the Charleston Classic in Charleston, S.C.

St. Bonaventure’s Osun Osunniyi (21) dunks over Marquette’s Kur Kuath during the first half Sunday at the Charleston Classic in Charleston, S.C.

ST. BONAVENTURE — Mark Schmidt was referred to by multiple national pundits as “one of the best coaches in the country.”

The St. Bonaventure faithful drew similar praise, becoming, at times, a bigger story than what was happening on the court for the way it descended upon Charleston, S.C. in droves, took over TD Arena (and several of the nearby establishments) and made it feel like a road game for the opposition — even Clemson, situated a manageable 240 miles away, compared to 860 for local fans.

And the Bonnies’ celebrated starting five was recognized, on a larger scale, for what it was: one of the most connected groups in the country, for whom experience and chemistry has so far reigned supreme.

All of those, of course, were things that those closest to the program already knew. The seeds for last weekend were planted when the current core guided Bona to the Atlantic 10 Tournament championship game as freshman two years and eight months earlier.

But to see all of those components come together the way they did, on a country-wide level, to watch as that uniqueness of Bona basketball broke into the national conscience, amid a 3-0 showing, wasn’t just a victory for the program, but one for the greater St. Bonaventure community as a whole.

FROM A hoops standpoint, Bona topped teams that currently rank No. 48 (Clemson), No. 59 (Boise State) and No. 77 (Marquette) in the KenPom projection for the Charleston Classic crown. It vaulted to No. 16 in the Associated Press Top 25, an unforeseen development for even the most ardent follower.

And it demonstrated: Though it might not have an individual talent like Obi Toppin, it possesses many of the same intangibles that made that once-in-a-generation Dayton team so great two years ago.

Beyond that, it made the most of its exposure to a prestigious in-season tournament, and did so before a national television audience. And those fans? It’s a safe bet that just about everybody in the college basketball world has at least an idea of the unparalleled nature of Bona Nation.

IN SHORT, it was a precisely perfect week for Bona and its fans, perhaps the most meaningful regular season stretch in program history. And never, as it immersed itself in those three games and the incredible support it was getting, was that lost on these Bonnies.

“It was just exciting,” senior Jaren Holmes said. “These are games we dream about playing in, it’s a situation (referring specifically to Bona’s comeback win over Clemson) that we could talk about forever. This is one of those games, it will be talked about back in Olean … it’s just an honor to play here at Bonaventure, to play for these fans, to play with these guys on the court.”

In that moment, he then gestured to the crowds of cheering Bona fans that had lined the streets outside the arena, smiled and added, “Look at them. They’re just outside waving. But it’s crazy. That’s the type of energy you have from that small town in Olean that nobody believes anything is there.

“Those are great people down there, we play for them every night.”

Bona, with one spectacular tournament showing, provided ample evidence that it’s up to the challenge this season, that (so far) it not only embraces being nationally ranked and the A-10 preseason favorite, but relishes the role.

THE BONNIES won three games in three very different ways, pulling out a wire-to-wire battle against Boise State, rallying from a 16-point deficit to beat Clemson and demolishing a Marquette team that had just knocked off No. 10 Illinois. Along the way, it proved it could succeed in various forms: with its trademark defense and unselfishness, with its unflappable nature and the ability to almost never beat itself and, here and there — believe it or not — with a barrage of 3-pointers.

(And how about the mid-range game from Jalen Adaway?)

It’s early, but this has the look of a second-week NCAA Tournament team. And that was revealed with so many of their own in attendance, including program legend Jim Baron, who shared a postgame moment with Schmidt on Sunday night.

“He’s just proud,” Schmidt said of the interaction. “He’s a great alum, great player, great coach, and he’s just proud … just like all Bonaventure alums. They come here, they support us, we couldn’t have done it without them. To have 1,200-1,500 come down from Olean, from Charlotte, from all over the country, just shows the passion they have for basketball.

“I think the nation really found out in the last four days what Bonaventure is all about, the program, the commitment, about our players, about our legacy. The tradition that we have and our fan base — we may not have the biggest fan base, but we have the most passionate fan base.”

The Bonnies, afterward, dedicated their performance to those fans.

But they also did it for themselves.

“I don’t think we did it to prove anything to anybody,” Holmes said, when asked what Sunday’s win meant from a larger standpoint. “It’s always been just us and that’s always been our motto.

“I don’t think we’re gonna play any harder just because we were trying to prove a point or anything like that, because at Bonaventure, this program wasn’t built on being given anything. We don’t have the best facilities, we don’t get five-stars; we get hard-working, blue collar guys and we just go out there and work every day, and that’s what we showed.”