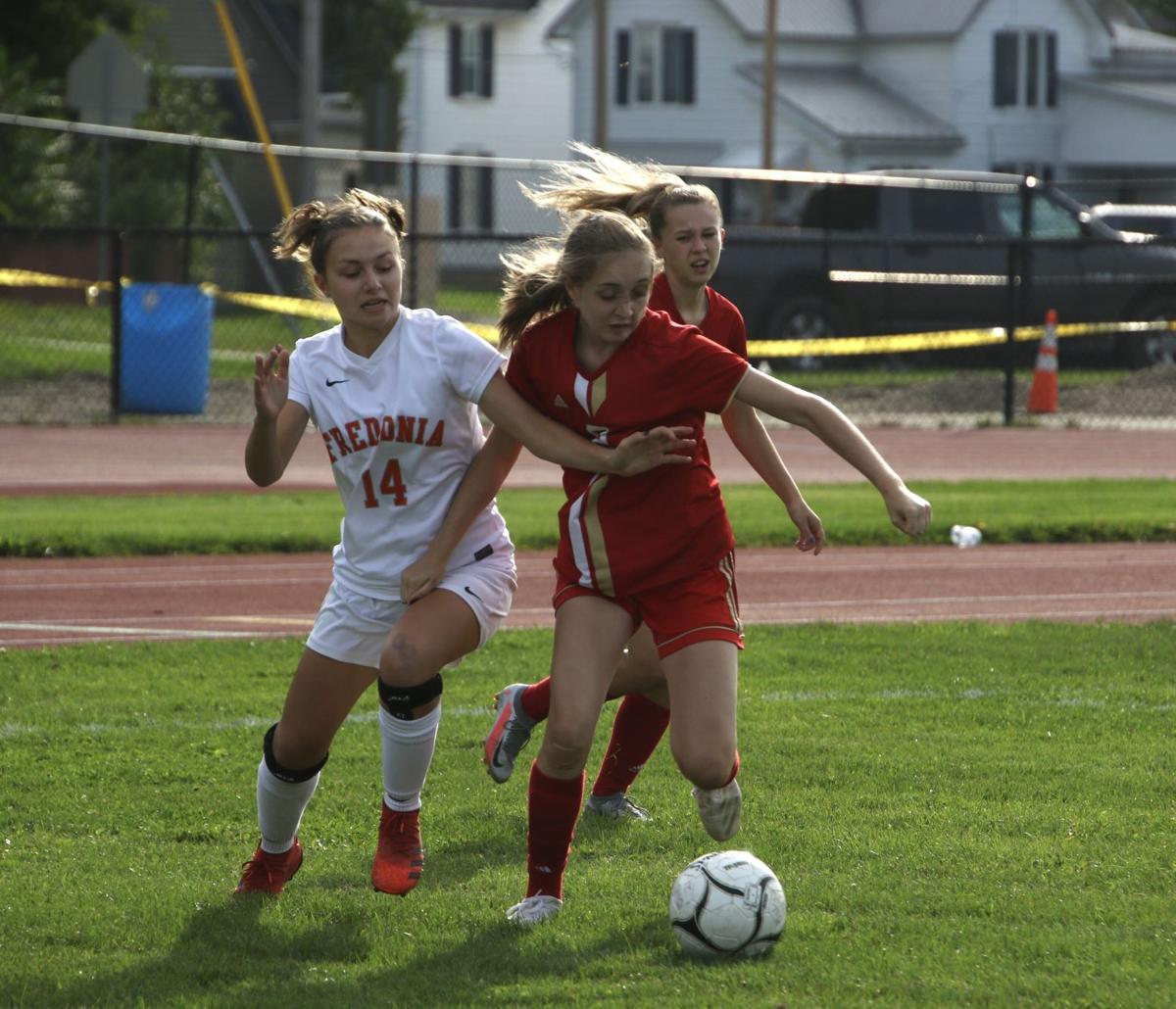 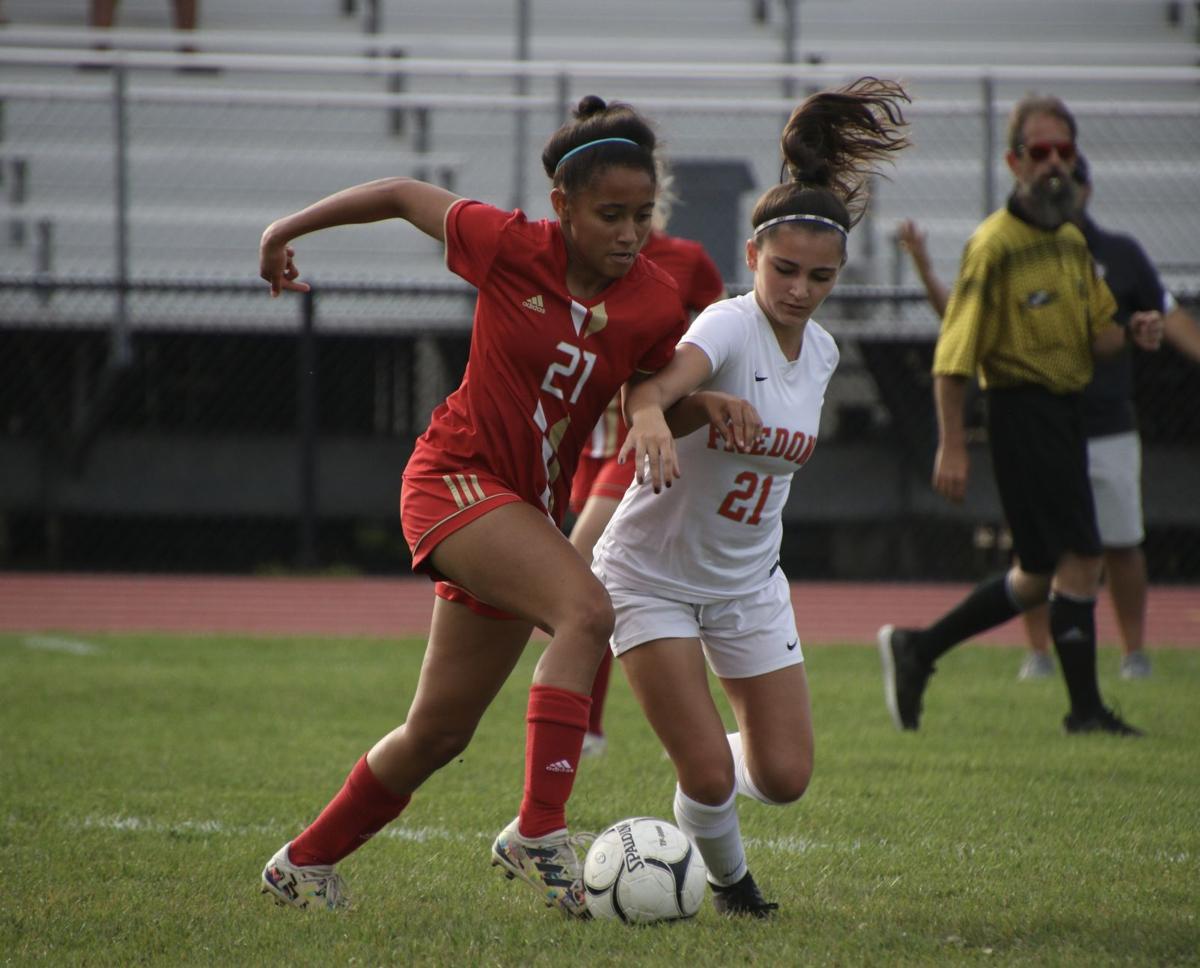 Olean’s Jezerae Fayson (left) looks to get by Fredonia’s Sophia Gullo during a CCAA West girls soccer game on Monday in Olean. The Huskies came up just short in a 1-0 defeat. 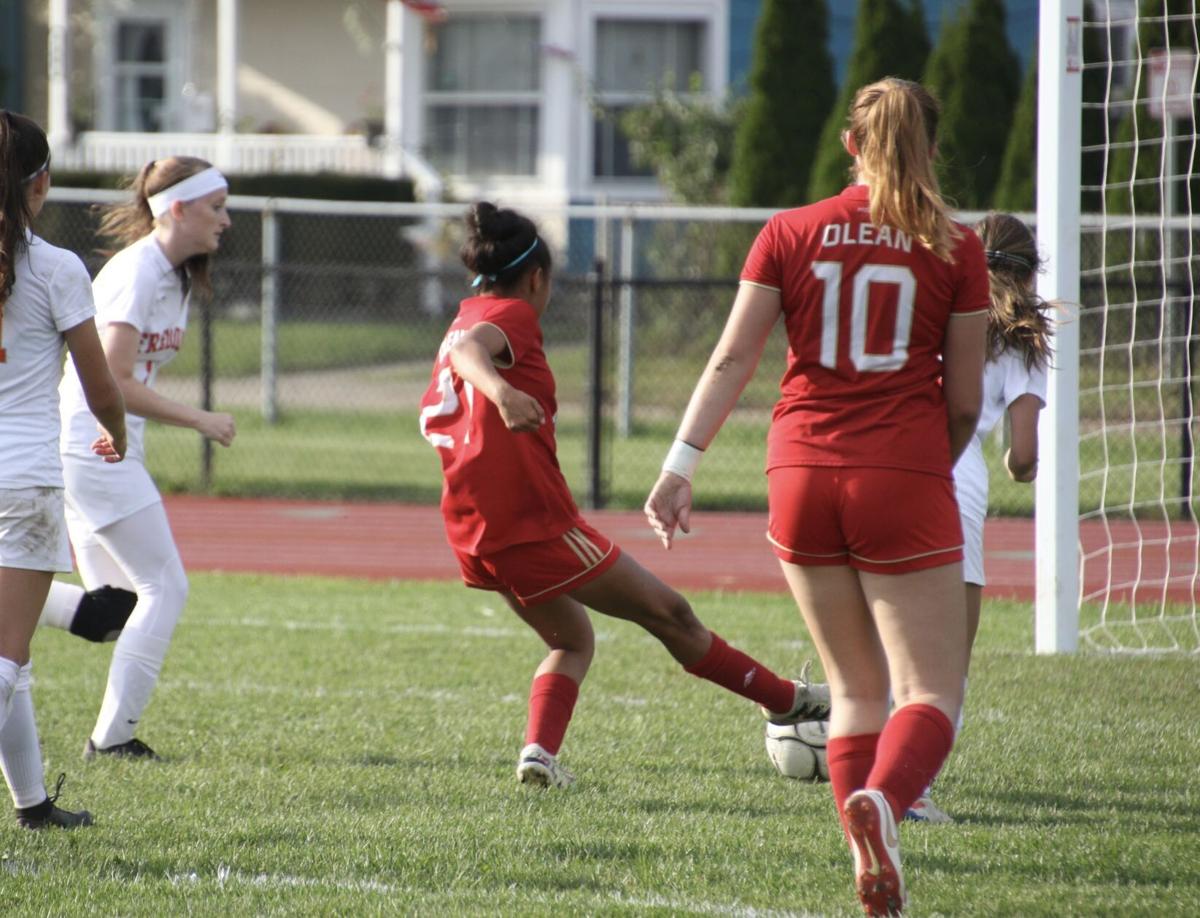 Olean’s Jezerae Fayson (21) gets off a shot that would go just wide. 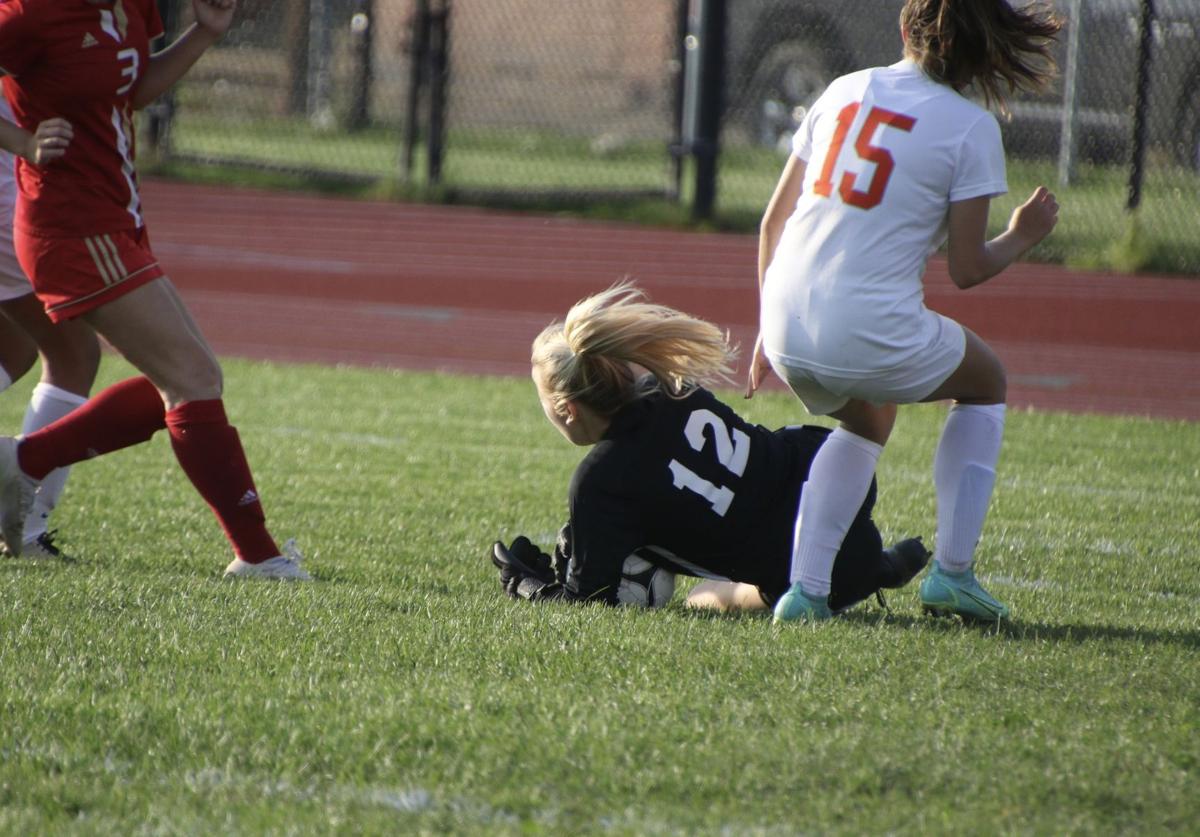 Olean’s Emma Edwards (12) comes out to smother the ball. 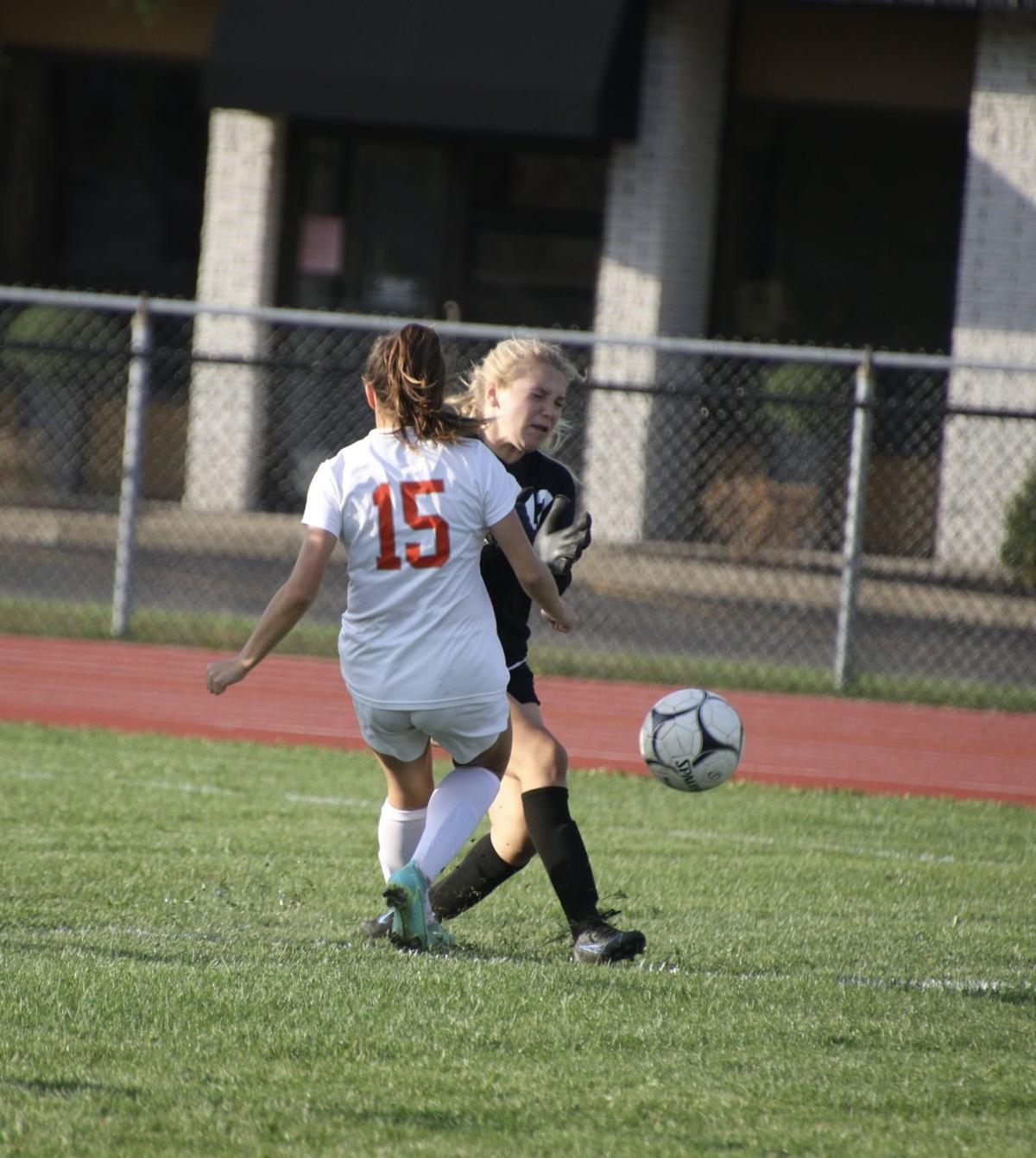 Olean’s Emma Edwards (right) comes out to kick the ball away from Fredonia’s Lila Cameron (15).

Olean’s Jezerae Fayson (left) looks to get by Fredonia’s Sophia Gullo during a CCAA West girls soccer game on Monday in Olean. The Huskies came up just short in a 1-0 defeat.

Olean’s Jezerae Fayson (21) gets off a shot that would go just wide.

Olean’s Emma Edwards (12) comes out to smother the ball.

Olean’s Emma Edwards (right) comes out to kick the ball away from Fredonia’s Lila Cameron (15).

OLEAN — Dan Freeman made no bones about it.

“I told the girls, this (Fredonia) team is better than us,” the Olean girls soccer coach acknowledged saying prior to his team’s rematch with the Hillbillies on Monday. “Every other team, (we think) we’ve been better than. But Fredonia’s better than us because they outworked us the last time we played them.”

In the two-and-a-half weeks since, the Huskies had been working to improve … almost with the sole purpose of taking down the league’s top team in Round 2. And this time, they were much better, proving that they belong on the same pitch as their unbeaten counterpart. The only thing that didn’t change was the outcome.

Emily Timmerman converted a penalty kick 10 minutes into the second half and Fredonia (9-0) used that goal to escape with a 1-0 triumph in a CCAA West matchup. Kyleigh Waterman made five saves to earn the shutout while Emma Edwards stopped four shots for the Huskies (4-3-2).

And though Olean fared much better than the 3-1 outcome from Sept. 10, it was “frustrating” to come away with another loss, Freeman admitted.

“We just had to work hard, do all the things we’ve been working on — quicker passes, shorter passes, quick things,” he said. “We pulled it all together today; the improvement was obvious from the last time we played them. I don’t know about the attacking third, but we were definitely more on their side of the field. We were kind of dominating that game, we just didn’t get the result to go with it.”

Olean fell to 2-3-2 in league play, behind both Allegany-Limestone and the league-leading Hillbillies (7-0).

Of the call that led to Fredonia’s PK, Freeman added, “It was a handball, but her elbow’s in tight, it hits her elbow and went down to her feet, maybe a foot inside the 18-yard box. They maybe could have played it outside on a direct kick. To lose that game on a PK when I think we out-performed them, it’s tough. But we stepped up tonight and controlled the game.”

Cait Kellogg also found the back of the net for the Gators (5-3), which exploded for five second-half goals to pull away from a 2-0 halftime advantage.

In one of their most decisive wins of the year, the biggest bright spot, coach Dale MacArthur said, was getting an assist from three defenders — Hannah Peters, Mia Herzog and Sydney McClelland.

Kylee Kiener chipped in her own helper while Kelsey Riordan made three saves in a winning effort for A-L. Dunkirk fell to 2-3.

Teagan Kosinski posted a goal and two assists while Olivia Dean had a goal for the Panthers (9-1), who remained unbeaten in league play, 1.5 games ahead of Ellicottville, and have won eight-straight.

Kendall Artlip added a pair of helpers and Mia Welty chipped in an assist. Mackenzie Harmon and Caydence Zalwsky needed no saves to preserve the shutout. Sarah Courtney turned away 14 shots for Franklinville (2-8).

CATTARAUGUS — Mandy Hurlburt (assist) scored just one minute in and finished with a hat trick to key Ellicottville to its third-straight win.

Alysa Williams and Emilee Ruiz each added a first-half marker while Jocelyn Wyatt chipped in the seventh goal for the Eagles (6-4). Williams and Wyatt also had assists while Brooke Butler and Layla Kerns also had a helper.

SALAMANCA — Samantha English scored on either side of halftime and Kyra Pence collected a pair of second-half markers to pace Randolph.

Clinging to a 1-0 halftime lead, the Cardinals (5-5-1) rattled off four markers over the final 40 minutes to pull away. Aubrey Hogan added a goal and a helper while Kendell O’Neill needed no saves to preserve the shutout.

ANDOVER — Cuba-Rushford tallied on either side of halftime while continuing its strong season with a shutout triumph.

Rachel Dyche netted what proved to be the game-winner off a pass from Elysa Tylor in the 21st minute. Macie Demick added an insurance goal off a feed from Taylor Searle in the 56th minute.

Tara Duvall made six saves for the Rebels (6-4), who have taken two of three meetings with A/W this year (both by 2-0 scores).

“We did a much better job of keeping our composure and closing the game out this time around,” C-R coach Aaron Wight said “It was nice to see some other girls step up again for the second game in a row. It seemed like we got stronger and stronger defensively as the game went on.”

WELLSVILLE — Vena O’Dell scored off a Mackenzie Cowburn pass in the first half and the goal held up in a tight win for Wellsville (4-6).

Makenna Dunbar recorded 12 saves in earning her second shutout of the season. Lillian Mullen made eight saves for Canisteo-Greenwood.