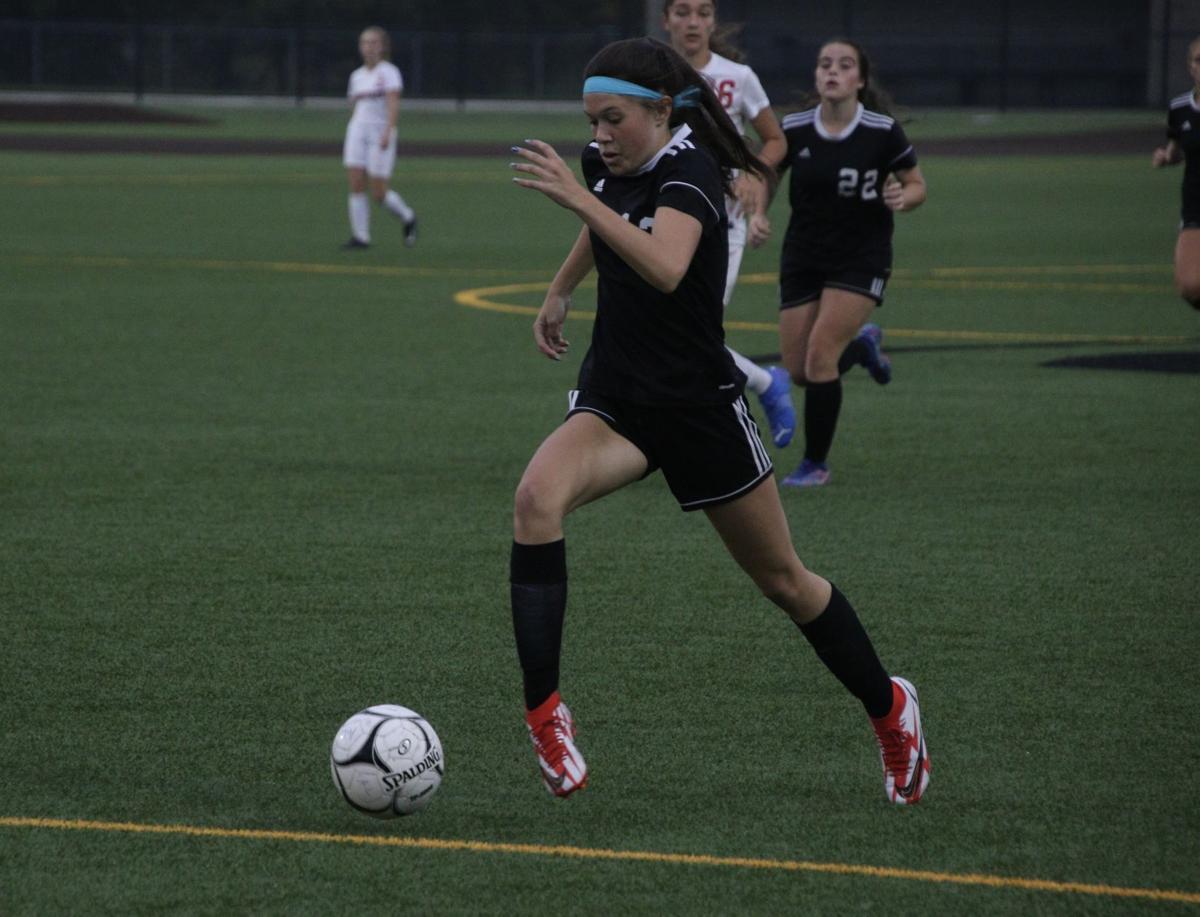 Allegany-Limestone’s Addie Fisher (13) races down the field during a CCAA West girls soccer game against Jamestown on Friday night in Allegany. The Gators closed the regular season with a 7-0 victory. 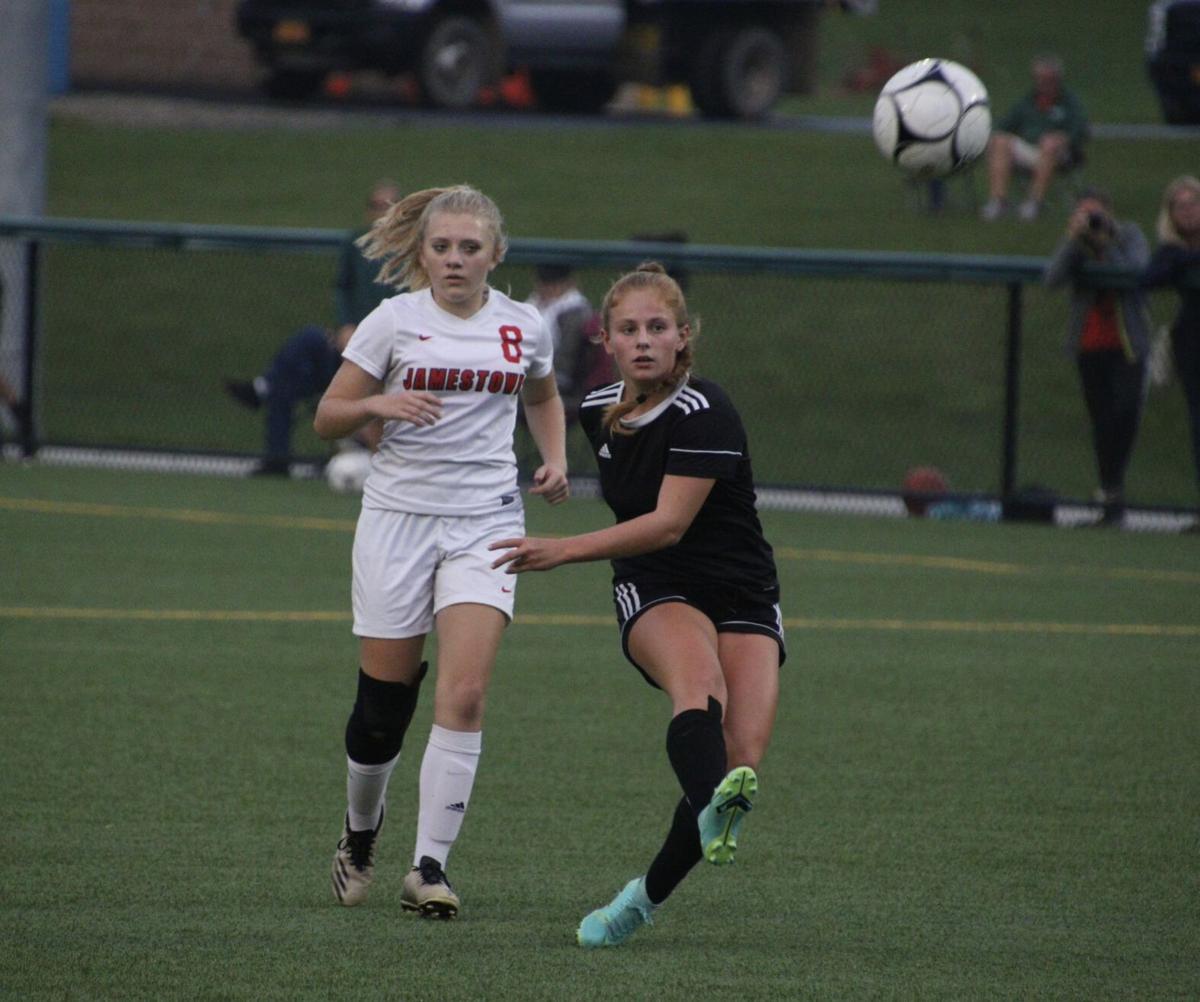 Allegany-Limestone’s Payton Fortuna (right) beats the goalie from deep during the Gators’ 7-0 CCAA West home win over Jamestown on Friday.

Allegany-Limestone’s Addie Fisher (13) races down the field during a CCAA West girls soccer game against Jamestown on Friday night in Allegany. The Gators closed the regular season with a 7-0 victory.

Allegany-Limestone’s Payton Fortuna (right) beats the goalie from deep during the Gators’ 7-0 CCAA West home win over Jamestown on Friday.

Portville led 2-0 at halftime and stretched the lead to 3-0 just four minutes into the second half. Mia Welty and Courtney Lyle scored in the first half, the latter assisted by Olivia Dean. Dean added the third goal with a Meghan Lyle assist.

Kyra Pence scored twice in the second half, in the 18th and 40th minutes of the half, both times with a Mattie Evans-Brown assist.

Mackenzie Harmon and Cadence Zalwsky each played a half in net for the Panthers (15-1, 12-0), combining to make three saves.

“Soccer is the type of game that can change quickly and Randolph has some very nice athletes and some great speed,” said Portville coach Jesse Archer, whose team had topped the Cardinals 2-0 in the first meeting. “We were able to score three times ... but they played a good possession game as well. So even with a three-goal lead we knew that they have some weapons. I think we were ready for it but they did a great job making a comeback and not giving up.”

“It’s a great feeling,” Archer said of closing out the regular season, “the kids are really excited and we know there’s a lot of teams out there (in Section 6 Class C) that are going to challenge us and we’ve got a lot of work ahead of us.”

Taylor Searle had the assists on both markers while Elysa Tylor needed two saves to earn the shutout. The Rebels outshot F/S 15-2 while finishing the regular season 10-6 (6-4).

“This was a good effort all the way around tonight,” C-R/H coach Aaron Wight said. “Sofia scored two nice goals off of two good crosses and Elysa stepped in and played some good minutes for us at keeper.”

ALLEGANY — Payton Fortuna racked up three goals and an assist as Allegany-Limestone closed the regular season in convincing fashion.

Olivia Paterniti added a goal in each half while Gracie Amore and Addie Fisher also found the back of the net for the Gators (9-5-2). Aiden Gardiner handed out three assists and Kylee Kiener and Chessa Klice also chipped in a helper.

Alliyah Penick notched the other goal while Brielle Budd made three saves and handed out an assist and Jennifer Baxter stopped two shots for the Gators.

The Gators finished the regular season with a winning 8-7-2 record. Salamanca closed out at 1-15.

WELLSVILLE — Hope Russell tallied in the sixth minute to set the tone and had a hat trick by the 22nd minute to power Fillmore.

The Eagles finished 16-0 to cap their third-straight undefeated regular season. They’ve now won 51-straight regular-season games (including a shootout victory over Portville in a season-opening tournament in 2019) dating back to the middle of the 2018 campaign.

Sophia Templeton collected two goals while Cece Schmidt and Amelia Rose added a marker apiece. Grace Russell handed out three assists, including two to her sister, while Zoe Beardsley, Madi Geertman and Emily Krzeminski also had a helper for Fillmore.

Preslee Miller and Alex Thur combined for four saves in the shutout. Wellsville finished the year 4-12.

Goode scored three goals in the first half before tacking on four more over the final 40 minutes. Caroline O’Gara handed out three assists and Gabriella Nitti and Alyssa Yanosh each added a helper for Bishop Kearney. Kennedy Boston made 11 saves to help preserve the shutout.