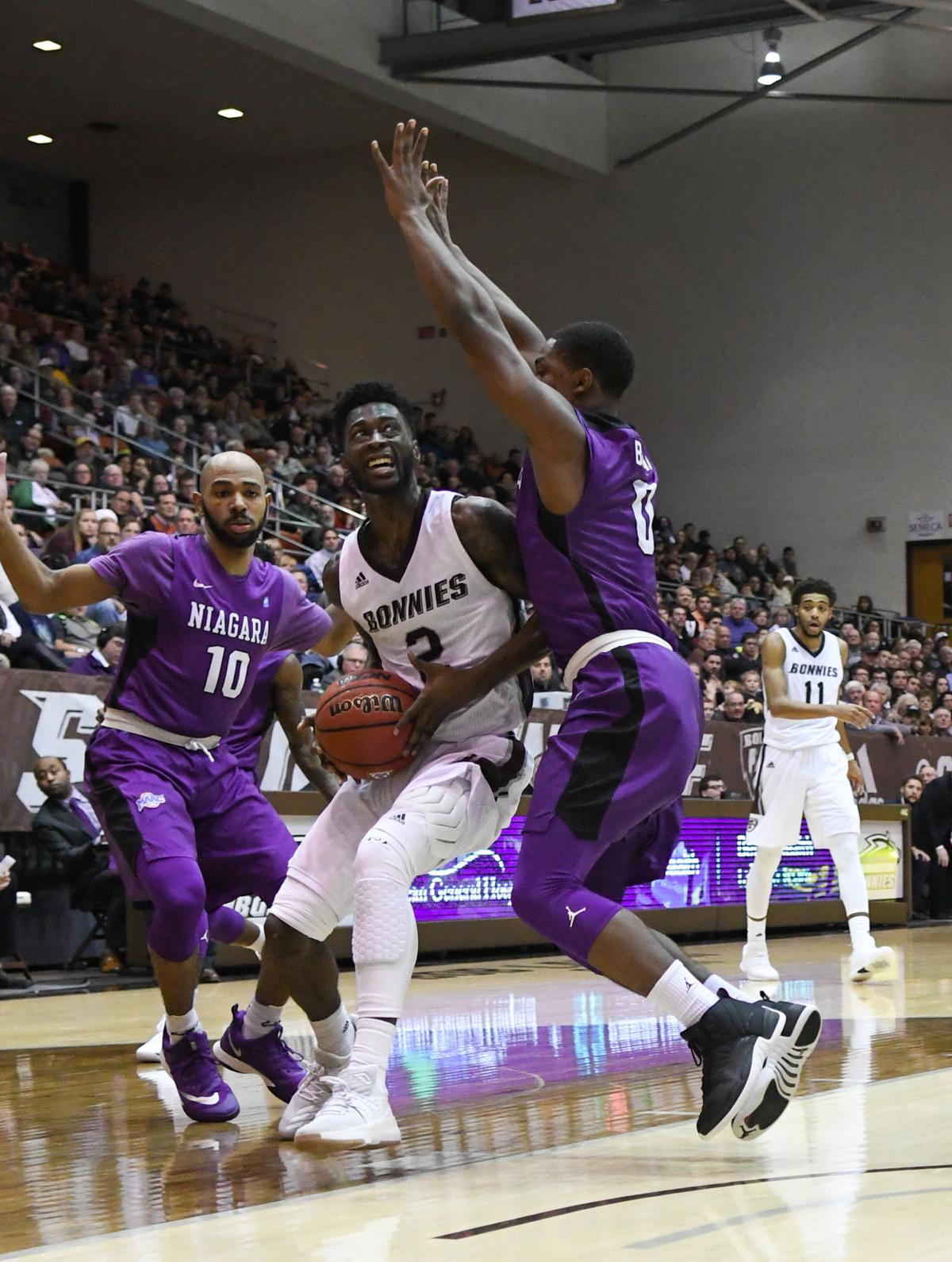 St. Bonaventure’s Matt Mobley works his way through a pair of Niagara defenders – Kahlil Dukes (10) and Chris Barton (0) during the first half of Friday night’s game at the Reilly Center. 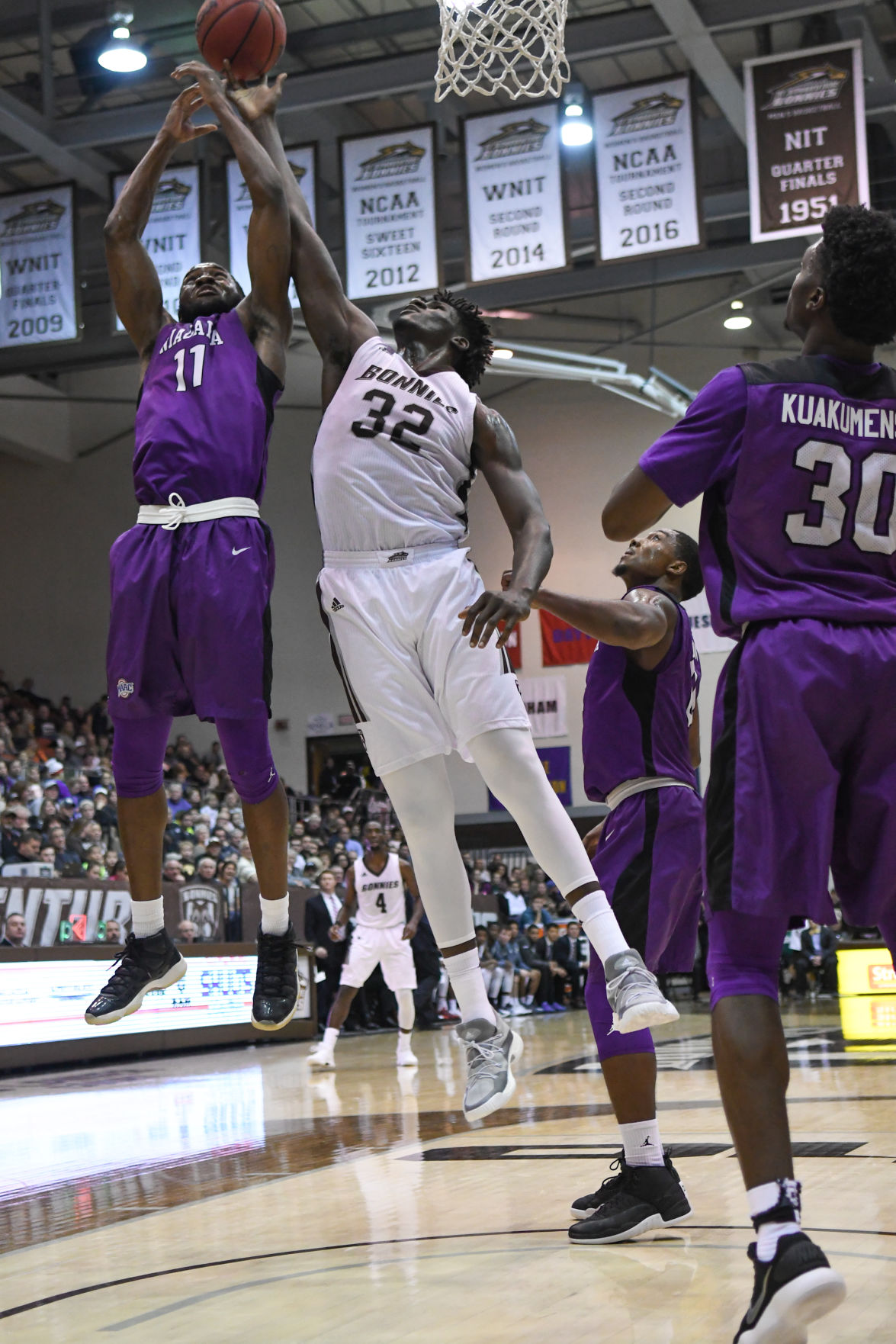 St. Bonaventure’s Matt Mobley works his way through a pair of Niagara defenders – Kahlil Dukes (10) and Chris Barton (0) during the first half of Friday night’s game at the Reilly Center.

ST. BONAVENTURE — The St. Bonaventure men’s basketball team had one final chance to save itself from the unthinkable.

Dead in the water with 30 seconds remaining, the Bonnies had the ball in their hands with a chance to tie it in the final seconds. But their final possession ended the way so many others did in these critical moments:

With a missed opportunity.

Matt Mobley, who has filled the superhero role before, dribbled up the sideline and sent a pass to Nelson Kaputo, starting this game in place of injured star point guard Jaylen Adams. Kaputo slipped, lost his sneaker and the ball rolled out of bounds.

Just like that, a game-long uncomfortable possibility became reality. Against the backdrop of unprecedented preseason expectations, the Bonnies are 0-1, falling to Niagara, 77-75, before 4,952 stunned observers Friday night inside the Reilly Center.

For Bona, there was this morsel on which to fall back: It lost to an inspired long-time rival, a battled-tested team with a talented backcourt, without its best player. But the reality is, the Bonnies lost a game they know they should have won, with or without Adams, in their first chance to prove they’re “for real”.

“He’s our best player,” coach Mark Schmidt said of Adams, “but we’re not making excuses. They beat us with the guys they had out there, and all the credit goes to them.”

Without Adams, the Bonnies’ offense appeared disorganized out of the gate, and the result was a nine-point deficit (34-25) at the break. In those first 20 minutes, Bona shot just 26 percent from the field, went 0-for-8 from 3-point range and had just one assist.

Schmidt’s team charged back and took the lead, 56-55, on a Courtney Stockard 3-pointer with 7:47 remaining, but miscues kept it from ever actually pulling away. Bona missed a couple of open 3-pointers down the stretch. It had four turnovers over the final 3:15 and Niagara hit enough big shots to remain out front.

With Adams in sweats and a walking boot on his left foot, Mobley did his best to rise to the occasion. The senior guard scored a game-high 29 points, including a trio of free throws that made it a one-possession game with 1:23 left and a 3-pointer that pulled Bona to within two with 15 seconds left.

On a night they set out to begin proving the preseason prognosticators correct, they suffered one of the tougher home setbacks in recent memory.

“We weren’t disciplined,” Schmidt said. “We didn’t execute the way we needed to execute, both offensively and defensively. There were times where we played well at both ends, but we didn’t do it consistently enough. We had too many breakdowns, and every time we broke down, they hit a shot.”

Afterward, Schmidt couldn’t say how close his team is to getting Adams back. The 6-foot-2 guard didn’t seem to be moving particularly well while walking out to watch his teammates warm up.

“We had a play set up where (Matt) was going to get it, then he was going to come back and set up for a 3,” Schmidt said.

But it never materialized.

LaDarien Griffin was solid for the Bonnies, collecting his first career double-double with 10 points and 10 rebounds, including two big buckets down the stretch. Kaputo finished with 11 points on 3-for-9 shooting.

But Niagara’s best players were better. Kahlil Dukes had 23 points and Matt Scott added 18 for the Purple Eagles. Chris Barton (9 points) stuck a tough jumper with 1:01 remaining to make it a five-point game.

It was just the third time in 51 seasons that Bona dropped a season-opener in the Reilly Center, and the first such instance since 2004.

“In the first half, we were just missing shots. We weren’t moving the ball like we normally do,” Griffin acknowledged. “But it came at the defensive end. We gave up way too many points, way too many mistakes, we didn’t communicate.

“You can say first game, but when it comes down to playing basketball, we can’t have those mistakes, game one or the last game of the season.”

Adams’ absence was felt. The Bonnies totaled just seven assists on 24 baskets; Adams himself averaged just under that number last season. Bona led the Atlantic 10 in scoring a year ago, but managed just 25 points at the break and shot just 39 percent for the game.

The Purple Eagles, who shot 47 percent, snapped the Bonnies’ six-game win streak in the series. It was their first win since beating Bona in the RC in the 2010-11 season.

“It seemed like we played tight,” Schmidt said. “We had some good looks, we just didn’t play the first 20 minutes the way we needed to beat a team of Niagara’s caliber. Just watching tape of them, it’s the best team (Coach Chris Casey) has had since he’s been there.

“It’s not like we lost to a bad team; they’re a much improved team. At the same time, when you play at home, you expect to win.”

Added Griffin: “(We had) too many turnovers and were too undisciplined on defense to keep a lead.”