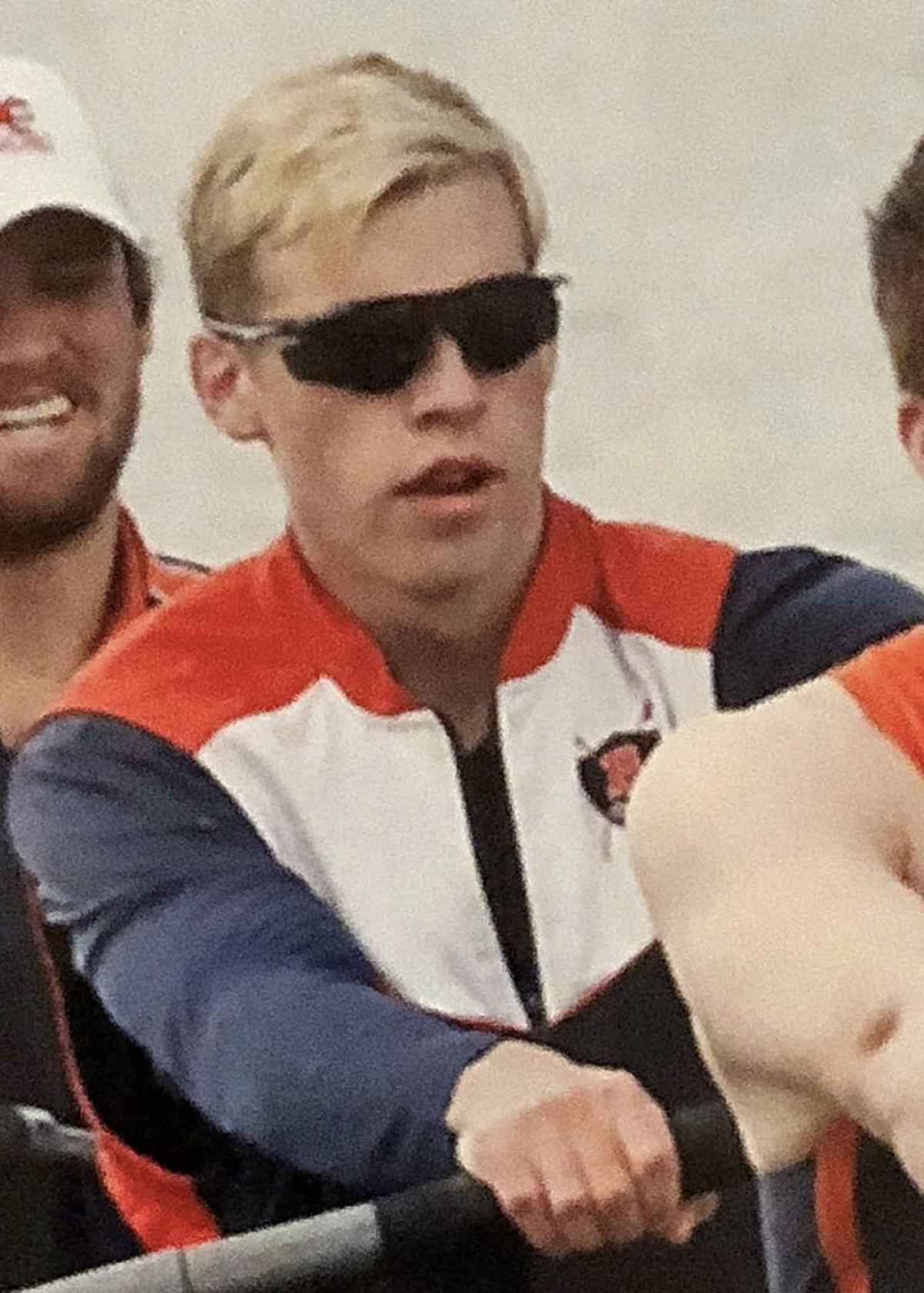 Christian Daugherty during one of the Bison’s fall regatta events. With Bucknell, he was able to row against the likes of Army and Navy. 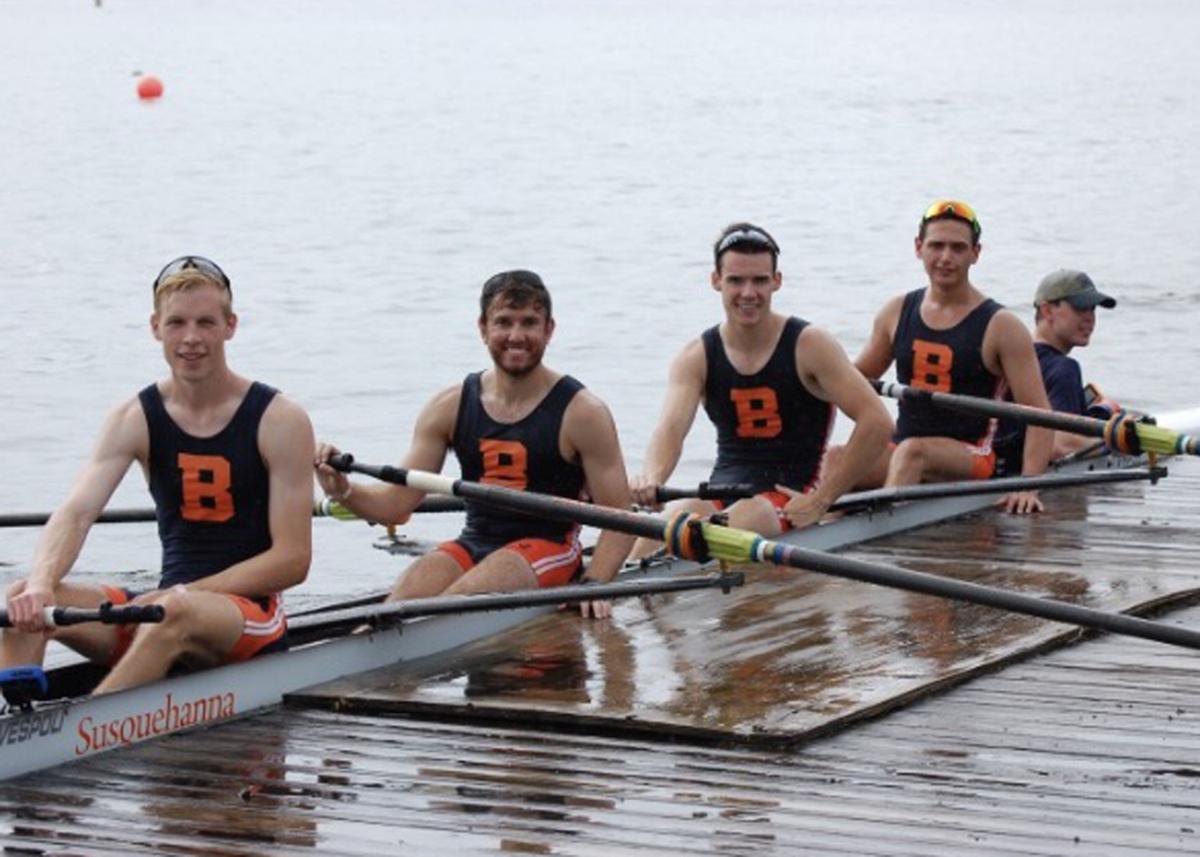 Christian Daugherty, a 2014 Archbishop Walsh graduate (far left), poses with his teammates before his Bucknell team won a bronze medal at the ACRA rowing championships in Gainesville, Ga. The event was held at the same venue where rowing was staged at the 1996 Summer Olympics.

Christian Daugherty during one of the Bison’s fall regatta events. With Bucknell, he was able to row against the likes of Army and Navy.

Christian Daugherty, a 2014 Archbishop Walsh graduate (far left), poses with his teammates before his Bucknell team won a bronze medal at the ACRA rowing championships in Gainesville, Ga. The event was held at the same venue where rowing was staged at the 1996 Summer Olympics.

From elementary school on, Christian Daugherty had always participated in traditional sports.

He knew he wouldn’t be recruited in those sports at the collegiate level, however. So when he arrived at Bucknell University in the fall of 2014, he decided to pursue a different athletic opportunity, a sport that he – like most in an area such as this – knew nothing about, but one he was intrigued by.

Daugherty walked on to the rowing team.

“It was kind of one of those things where I played a sport pretty much every season during high school,” the 2014 Archbishop Walsh graduate said. “I figured I always liked playing sports, it always helped with my time management, things like that. So I figured why not try it out? And I really liked it.”

Rowing, in Daugherty’s words, is a niche sport, popular particularly in Philadelphia, Boston and other pockets of the country. According to Wikipedia, it’s the oldest intercollegiate sport in the country.

By his junior and senior years, Daugherty had worked his way up to the Bison’s second varsity eight, one step below a school’s top boat, which competes against other second eights at various ACRA-sponsored events.

Unlike other collegiate sports, walk-ons have just as much opportunity to make an impact as the select few who are recruited.

“Rowing is really a sport where it comes down to the amount of work you’re willing to put in,” Daugherty said. “It’s a lot less about innate skills, like you’d have in a sport like basketball and soccer. There are some skills that you need to learn that are specific to rowing, but at the same time, as people move up, a lot of it just comes down to how much work they’re willing to put in.”

Rowing season spans longer than a typical sport, lasting from Day 1 in the fall through graduation in the spring. Over four years, Daugherty practiced two-and-a-half hours a day, six days a week.

His hard work paid off.

Last fall, he was “lucky enough” to participate in the Head of the Charles, the largest two-day regatta race in the world, on the Charles River in Boston. This spring, he rowed in the ACRA championship regatta in Gainesville, Ga.

In a late change, Bucknell disbanded its second varsity eight into smaller boats – a heavyweight four and a lightweight four. Daugherty manned the stroke seat (closest to the stern, which essentially made him the anchor) in the lightweight four.

“Basically, I was setting the tempo,” he said, “with (the other three rowers) following.”

The sport itself, as you might imagine, is rigorous. It’s been said, Daugherty noted, that the amount of energy a person exerts over the course of a six- to seven-minute sprint race is the equivalent of playing two full-length basketball games back-to-back.

He can’t be sure if that’s true or not, but rowing certainly takes a physical toll. It was a worthwhile price to pay, however, for the experience that being a four-year member of a collegiate rowing team provided.

“I think at the end of the day, what it means to me most is just what I was able to get out of it,” said Daugherty, who also made the ACRA’s All-Academic team this year. “Looking back, some of my best friends from school I made through the rowing team … so I took a lot of friendships with me.

“A lot of the skills that I was able to learn, I probably wouldn’t have gotten just from sitting in the classroom or doing other activities. I think rowing is probably one of the ultimate team sports, having everybody working together. And then obviously the hard work aspect of it is huge.”

Daugherty, who graduated from Bucknell this spring and will begin his professional career in New York City in a couple of weeks, will take a myriad memories from his time in the water, as well.

None will top what his foursome was able to do at the ACRA championship in Georgia.

“That was the last time I was on the water,” he said. “It took place after I had already graduated from Bucknell, so technically I was an alum by that point. In the boat I was rowing in, three of the four others (including the coxswain, who faces away from and serves as the navigator) were seniors, so they had just graduated, too.

“It was a really big moment for us. We kind of felt it throughout the boat together at the last minute. Just to be able to walk away with a top three finish was a big moment for all of us.”