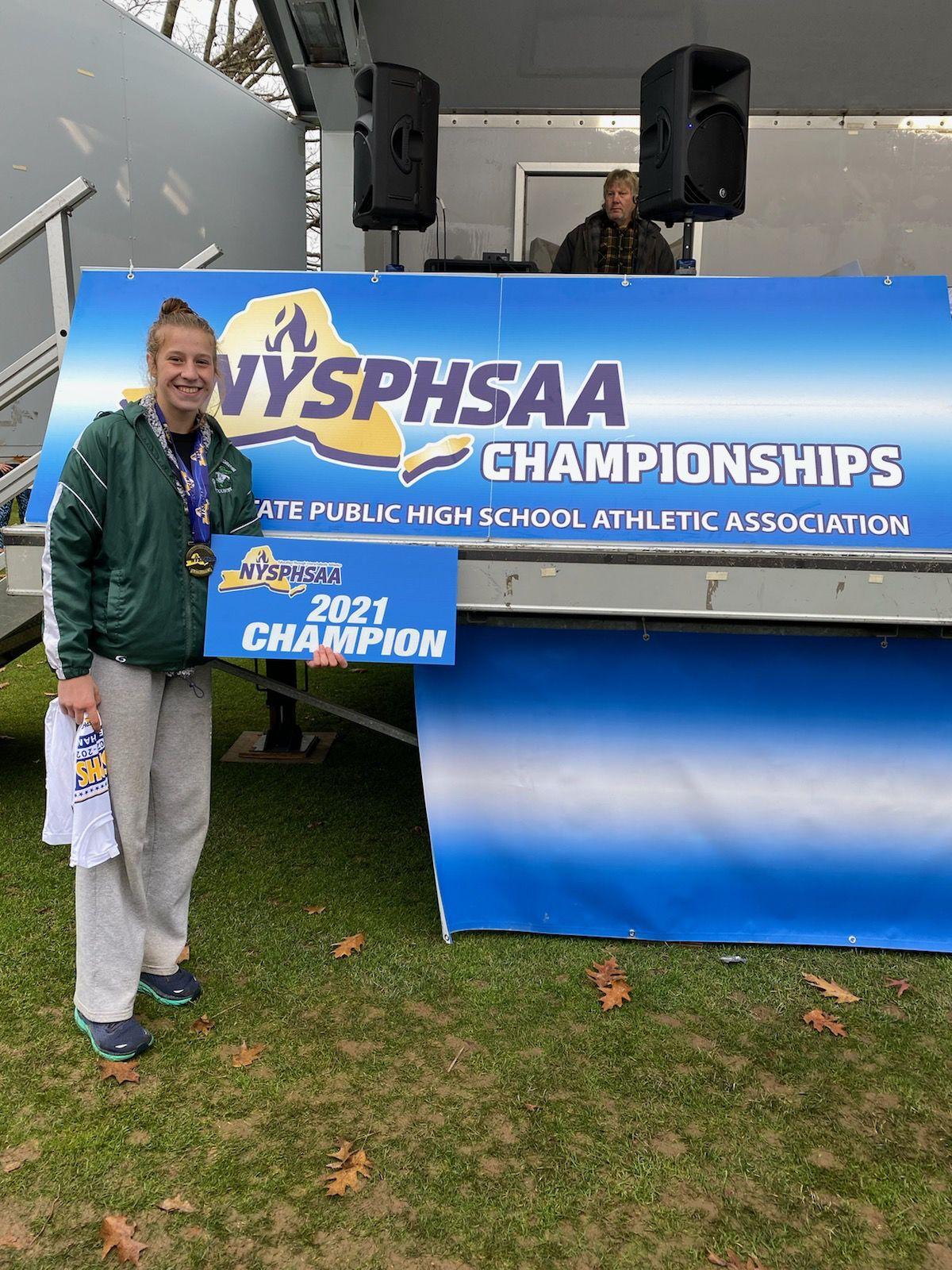 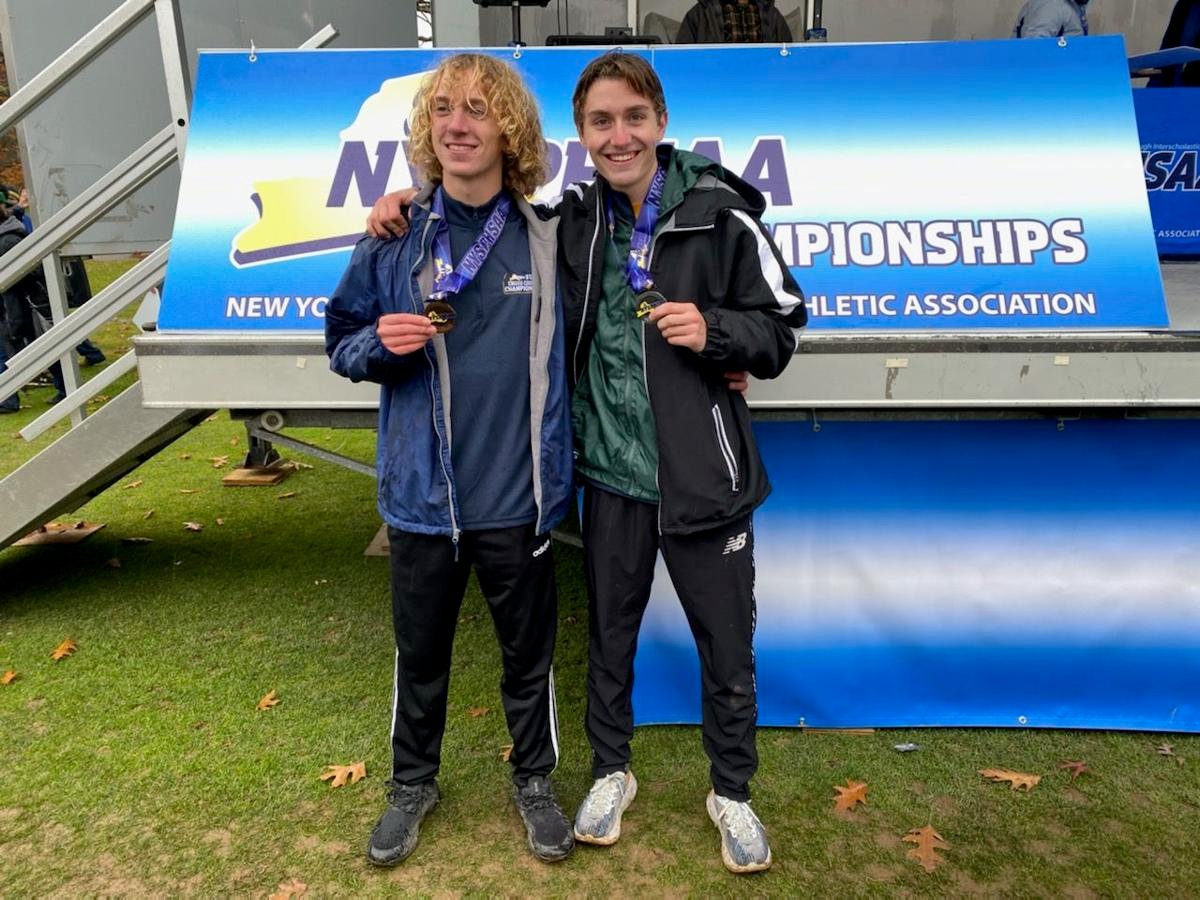 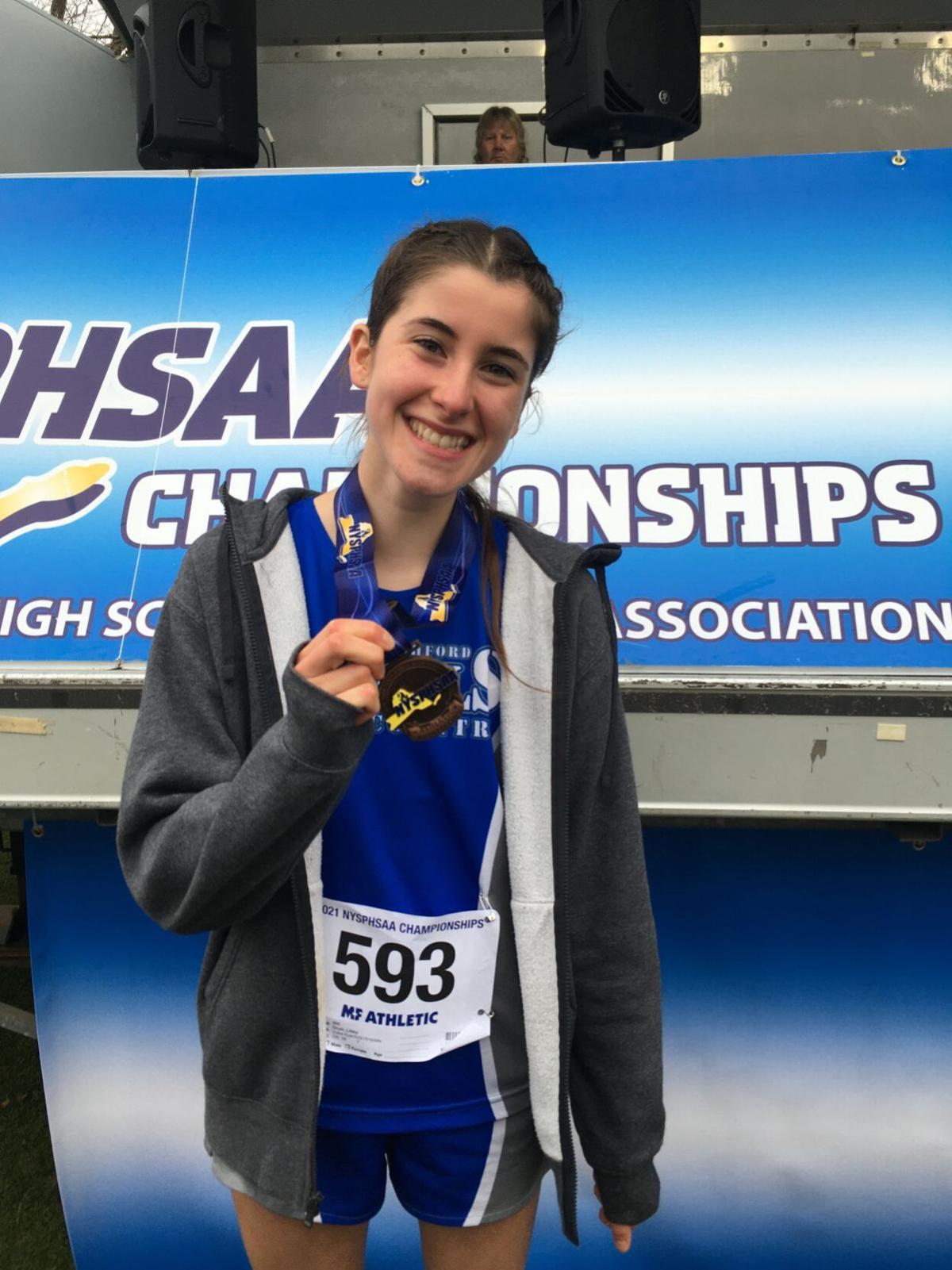 CHENANGO FORKS — For Angelina Napoleon, this might have been difficult to imagine back in early September.

The junior running star missed a couple of early dual meets for personal reasons. It took her a little while to become the familiar force she’d been since her eighth-grade season.

Napoleon ultimately did reprise that almost predestined role, however. And on Saturday, she manifested a storybook ending.

Napoleon finished first of 130 runners at the New York State Class C Cross Country Championship at Chenango Valley State Park. And she not only won on the biggest stage of the season, she dominated, finishing the 5K course in 18:37.7, a full 23 seconds ahead of second-place finisher Pipher Reid (19:00.6), of Chenango Forks.

NAPOLEON is A-L’s first state cross country champion. And after finishing 18th as a freshman in 2019 and missing out last year with all state championships being canceled due to COVID-19, on Saturday afternoon, she stood alone at the top.

“She did a couple of interviews afterward, and she commented on how she was really proud to represent Section 6 and our school in such a way,” A-L coach Kathy Stamets said of Napoleon’s effort. “This has been a rough season for her. It took her some time to get on track because we had some things going on the side that kind of got in the way.

“And the fact that she was able to get herself on track and headed in the right direction to take a state championship is really a remarkable accomplishment.”

A week earlier, Napoleon won a sectional class title while finishing second in all of Section 6. She was now two years older from her performance in Plattsburgh in 2019. So her goal for Saturday — her third trip to the state meet in four years — was well-established:

Try to win it.

“It’s something we definitely talked about,” Stamets acknowledged. “We knew it was going to be challenging for her to achieve that. She went out on the course and executed wonderfully. The night before, you could tell she had a focus, she knew what she wanted to do, what she needed to do. And she went right out, she executed that plan and, in the end, she was successful”

IT WAS a remarkable day not just for Napoleon, but for the Allegany-Limestone cross country program as a whole … and the Big 30.

Aside from a state titleist, A-L also boasted a runner-up, as senior Jacob Brink finished second on the boys’ side in 16:40.1, trailing only Alden’s Kyle Urban (16:14.7). The Gators also had a second top-five finisher (of 132 competitors) in senior Daniel Casey, who notched fifth in 16:53.8. Behind them, both Section 6 teams took second in the team standings, behind only Section 1

Before this, A-L had two total cross country runners qualify for the federation meet since the school merger in 1995. On Saturday, however, all three qualified for the federation event by finishing in the top five. That was the crescendo of a glittering campaign for the Gators, whose star trio was at, or near, the top in just about every event it competed in.

“IT’S AMAZING,” Stamets said, “and really it’s a testament to the three of them, because from very early on in their cross country careers, this was kind of a goal. They all had this goal to achieve states and get to the top of those rankings.

“For them to start young and come out at this point and reach that goal to where they achieved it is really a testament to them and their hard work.”

Elsewhere from the area, Cuba-Rushford’s Libby Drum had her own memorable afternoon. The C-R sophomore finished 20th of 108 runners in the Class D race with a time of 20:54.7, earning a Top 20 medal. “Any time you can get a Top 20 finish at this high of a level, that’s an amazing accomplishment,” Stamets noted.

Drum actually finished sixth on a loaded Section 5 team, also helping her section to second place in the team standings (221 points), behind only Section 3 (152 points).

Also from the Big 30, Franklinville/Ellicottville’s Maddox Bush claimed 43rd of 116 runners in the boys’ Class D race with a time of 18:26.5. Pioneer’s Brody Jones, meanwhile, logged an impressive 11th place finish in Class B with a time of 16:30.2.