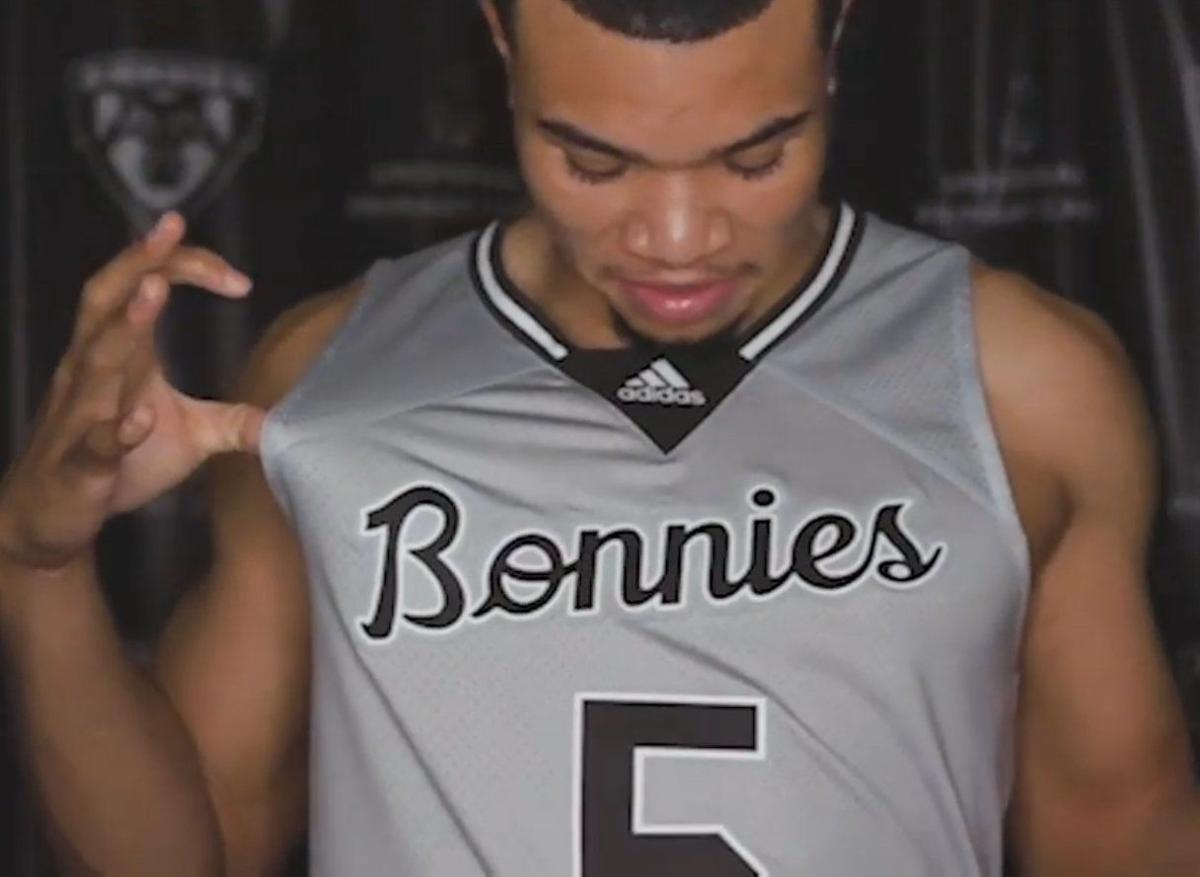 St. Bonaventure’s oft-used gray alternate uniforms will have a different look this year, now featuring a cursive ‘Bonnies’ script, serving as a bit of a nod to the program’s popular jerseys from the 1982-83 season. 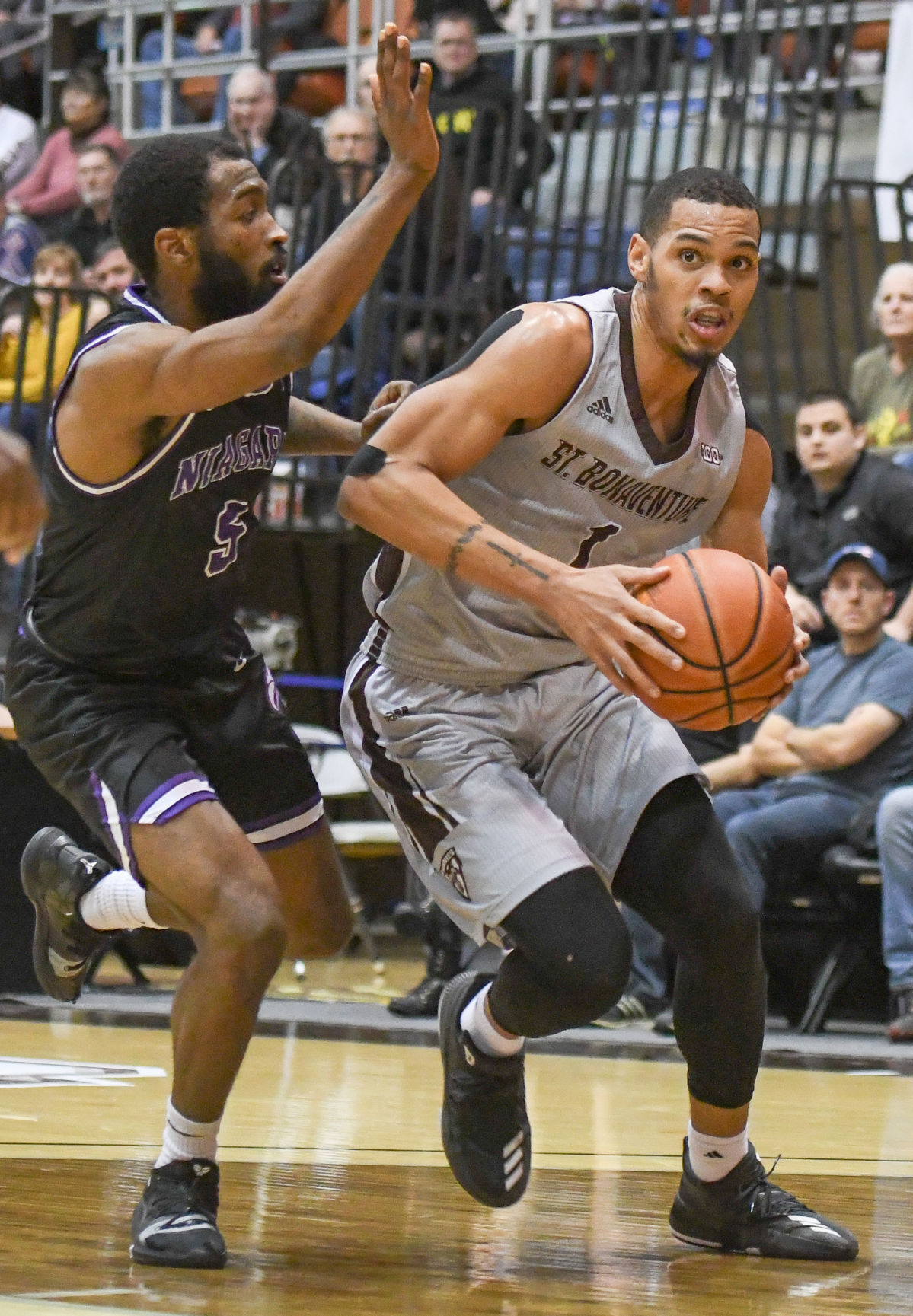 St. Bonaventure’s oft-used gray alternate uniforms will have a different look this year, now featuring a cursive ‘Bonnies’ script, serving as a bit of a nod to the program’s popular jerseys from the 1982-83 season.

ST. BONAVENTURE — It was created in 2012 as part of the first Big 4 Media Day event, held at a bar in Buffalo.

It’s lasted through a Media Day gathering at then-First Niagara Center, two hiatuses (before the 2015-16 and 2017-18 seasons) and a pair of Big 4 Basketball Classics, both of which resulted in St. Bonaventure victories over Niagara.

This year, we’ve reached the seventh iteration of the Preseason All-Big 4 teams in the nine years since their inception. And given that we’re still (at least) another few days from a Western New York-based squad tipping off, their presence is more relevant than it’s ever been as it helps to fill the basketball void in the area.

Three Bona men’s players earned All-Big 4 recognition, as voted upon by local media and the athletics communications staff at each school. Juniors Kyle Lofton and Osun Osunniyi were both named to the First Team while classmate Dominick Welch was cited to the Second Team. It’s the second-straight year that all three were designated to those particular units.

A YEAR AGO, Lofton became the third Bonnie to earn Big 4 Preseason Player of the Year honors, joining Youssou Ndoye (2014) and Jaylen Adams (2016). This year, however, that honor went to senior Buffalo guard Jayvon Graves.

Lofton averaged 14 points, six assists and a steal per game while leading the nation in minutes en route to an Atlantic 10 First Team All-Conference selection. Graves averaged 17 points, five rebounds, three assists and a steal while garnering a First Team All-MAC nod. Graves’ Bulls are also 2-0 in games against Lofton’s Bonnies, though both shined last year in an 84-79 UB win, with Graves going for 28 and Lofton tying his career high of 32.

As a voting media member, nine of this reporter’s 10 All-Big 4 selections matched the final teams, though there was some differentiation between First and Second. The lone variance came in giving a Second Team nod to Bona junior Jaren Holmes (12 points, 5 rebounds, 2 assists in the Atlantic 10) over Canisius’ Jacco Fritz (7 points, 5 rebounds, 2 assists in the MAAC).

This year’s Bona women, meanwhile, became the first SBU team of either gender to earn four All-Big 4 citations, with Deja Francis and Asianae Johnson picked to the First Team and Emily Calabrese and Jurnee President named to the Second Team.

A couple of days after losing its trio of season-opening games, Bona officially announced the addition of another.

The Bonnies will host Hofstra on Saturday, Dec. 19 (2 p.m.) in what now becomes their home-opener in an ever-changing non-league schedule.

The teams have met six times, three of those coming in the last five years, including last winter in the Reilly Center, when Bona rolled to a 73-45 triumph on a memorable day in which Bona honored the 1970 Final Four Team and the All-Time Team as part of its Centennial Season celebration.

In that matchup, Bona topped a Hofstra team that wound up going 26-8 and winning both the Colonial Athletic Association’s regular season and tournament championship crown, earning its first NCAA berth since 2001 before being denied that trip by the pandemic. This year, the Pride, under former Niagara boss Joe Mihalich, is again the CAA favorite, welcoming back CAA First Team selection Isaac Kante and honorable mentions Jalen Ray and former Bonnie Tareq Coburn.

Bona now has three established non-conference games: at Akron on Dec. 15 in Cleveland; against both Hofstra (Dec. 19) and Buffalo (Dec. 22) inside the Reilly Center. Coach Mark Schmidt’s team is scheduled to open A-10 play on Dec. 30 at Rhode Island.

Earlier this month, Bona unveiled a new uniform look for 2020-21, with modest changes found, particularly, on the shoulders, lettering and sides of the shorts.

On the latest episode of Bonnies Insider, more prominent alterations can be seen on the Bonnies’ oft-used gray alternate jerseys.

This year, rather than the same script as the away browns, Bona has adopted a cursive font similar to the popular look from the 1982-83 season (pictures this page). Additionally, its home whites now read ‘St. Bonaventure’ across the chest (the same way the road browns do) rather than just ‘Bonnies.’