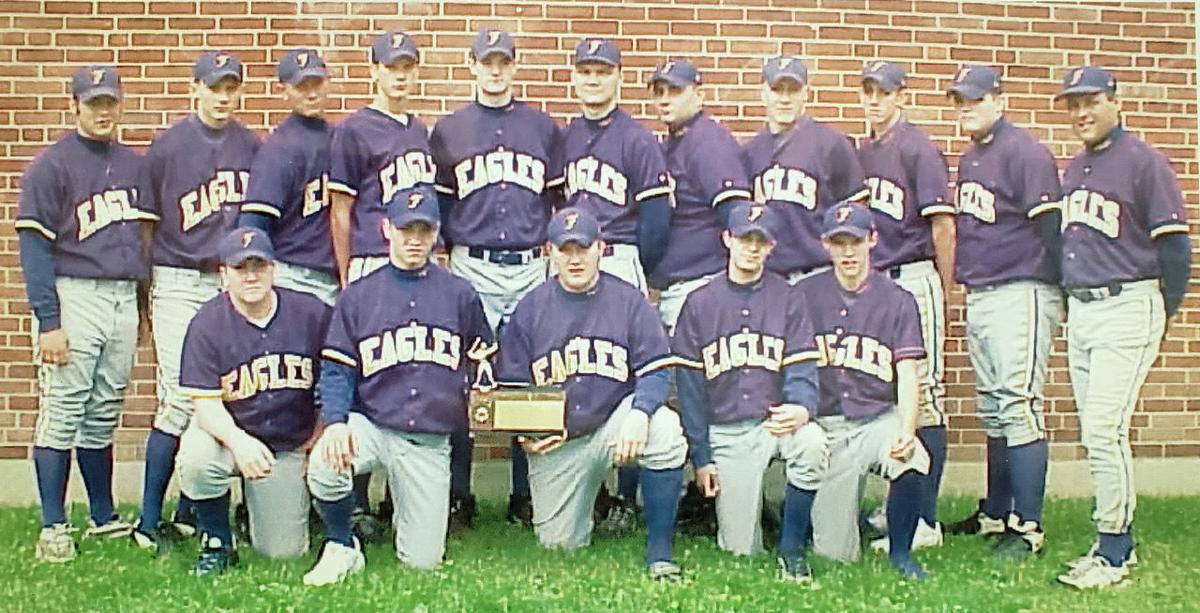 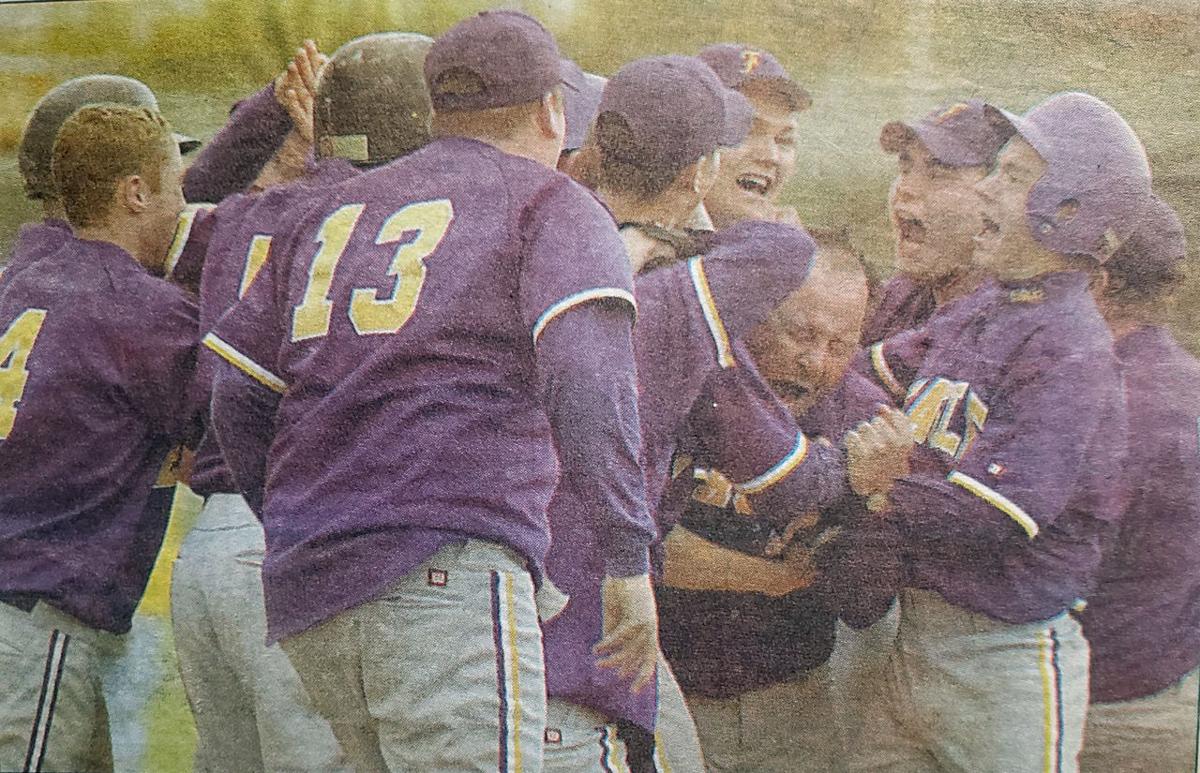 In this 2001 file photo, Friendship baseball players and coaches celebrate a thrilling comeback in the Section 5 Class D championship against Geneva DeSales. The Eagles came back from a 5-1 deficit, scoring five runs all with two outs in the bottom of the seventh for a 6-5 win.

In this 2001 file photo, Friendship baseball players and coaches celebrate a thrilling comeback in the Section 5 Class D championship against Geneva DeSales. The Eagles came back from a 5-1 deficit, scoring five runs all with two outs in the bottom of the seventh for a 6-5 win.

(Editor’s note: This is the next of a series in which the Times Herald and Bradford Era will present the best season/team accomplishment for every school in the Big 30. The staffs at both papers made a selection for each school based on consultation with current and former coaches and athletic directors. Today: Friendship.)

FRIENDSHIP — Facing long — but not impossible — odds, John Zambanini was struck by the confidence his players still showed.

In the 2001 Section 5 Class D championship, playing at Hornell’s Maple City Park, Geneva DeSales took the Friendship baseball team to its final out: trailing 5-1, with two outs in the bottom of the seventh. Then, the near-impossible happened, with the Eagles rattling off hit after hit until the game-winner by Wes Rosegart sent Ed Amore all the way from first base to home, walking off with a 6-5 victory.

Zambanini said he still watches the video of that game from time to time and enjoys calling up his former players to reminisce.

In his 14th and penultimate season that year as Friendship coach, Zambanini said the rally started with Joe Chamberlain — “my No. 7 or 8 hitter” — who hit a triple with two outs.

“Before the inning started,” Zambanini said, “my No. 7 or 8 hitter (Chamberlain), he kneeled down and I said, ‘So you’re going to make a dramatic comeback, huh?’ He goes, ‘Yup.’ He was just very nonchalant about it.”

Sure enough, they did.

“He hits a triple, he slides into third base and I’m screaming, ‘You don’t mean anything,’” Zambanini recalled. “Because there was a play there and he could have stayed at second. He’s like, ‘Sorry coach, I thought I could get it.’

“Just the way things happened, it was totally unbelievable.”

HAVING USED a timeout earlier in the inning, Zambanini recalled having to yell instructions to Rosengart to go the opposite way.

“He was trying to jack (a home run), his front foot’s coming up on the first pitch” he remembered. “I just called timeout so I don’t have another timeout. I go, ‘Wes, go the other way.’ I was always big on opposite field hitting. I said, ‘He’s pitching you away, go the other way with it.’ What does he do? He hits a line drive to the right-center gap, it’s perfect. Here comes big Eddie Amore, I chased him down the line, ‘run!’

Amore said he initially thought the hit would simply tie the game and he would reach third. He had a head start, as Zambanini sent him to steal second on the pitch.

“I remember the kid in front of me scored, it was tied, I’m thinking I can get to third and maybe score on a passed ball or something stupid,” Amore said. “And I remember getting to third and Z (Zambanini) was going nuts, waiving me around third and I’m thinking, ‘You’re sending me from first, are you nuts?’ I remember rounding third, I gave a quick look back and the ball was coming into second, I knew it was going to be close, but got in there and then it was just unbelievable.”

Amore recalled seeing opposing players preparing to celebrate in the seventh inning, even calling home before the game ended.

“‘Get ready, we’re going to come home, there’s going to be a parade,’” Amore said. “They’re actually calling home already and all hell broke loose. It was crazy.”

“I didn’t know but (my players) said, ‘They were on their phones calling and some of them were starting to take their spikes and everything off.’ Well, it ain’t over until it’s over,” Zambanini added, channeling Yogi Berra.

AFTER THAT improbable comeback, Friendship had much less trouble with Arkport, the DD champion, in the Section 5 Class D state qualifier. Friendship won 17-6, racking up five runs in the fourth and seven in the fifth to put the game away.

Friendship’s run came to an end in the Far West Regional, losing 6-5 to an Ellicottville team that made the state championship game. Amore admitted that the game “still haunts” him, as errors let Ellicottville jump on Friendship early.

“We gave up six unearned runs in the first inning and lost 6-5,” he said. “The first inning, literally, was bad-news bears from day one. Then (from) the second inning on, everything was normal. We dug ourselves out of the hole and that (Matt) Erlandson kid was a hell of a pitcher. But we finally started to get to him in the later innings but we just ran out of innings pretty much.

“I still get goosebumps thinking about that whole season, it was just crazy,” Amore said. “We rolled into places and my thing was we weren’t going to beat teams, I wanted to crush teams. Not 40-1 or anything like that, but I didn’t want to leave anything to, ‘Oh, if we would have had a better inning, we could have beat them.’ I wanted to beat teams 10-1 and we had a lot of that mentality. We had been with Z for a long time. Z coached my brother (Jason) back when they won it in ‘93, so I grew up around Z.”

THAT TEAM earned a strong following of fans driving from Friendship to away games.

Zambanini said he knew early on this team could compete for sectionals, fueled by an early playoff exit the previous year.

“The year before, I think we got knocked out in the second half and they just had a bitter taste, we shouldn’t have (lost),” he said. “They worked hard all year. It was a long time ago, but I had some scrappy teams over there. They were tough, mentally tough kids. And they competed, (we loved) this game as much as I did.”

Zambanini said the team had strong senior leadership from the likes of Amore, Rosengart and Taylor, as well as juniors Chamberlain and Kory Marks.

Amore hit .683 that season with six home runs and just two strikeouts. He also was a top pitcher, going 5-0 (including a no-hitter of Houghton in the second game of the season) with an 0.80 ERA, 61 strikeouts.

“Everyone hit very high batting averages, probably four or more of us were hitting over .400, a couple hit over .500, I hit .680,” Amore said. “There was just no give, our defense was super solid, we had good pitching and our outfield was probably one of the fastest outfields I’ve ever seen, left to right. Anything that wasn’t hit hard was caught. Our outfield could legit fly. But lineup-wise, I would put that lineup against ... obviously it’s hard, decade-to-decade and different eras and stuff like that, but that team was special.”

Zambanini stepped down as Friendship’s coach the following year and took a job in Olean, where he still teaches. The final game remains a vivid, unbelievable memory.