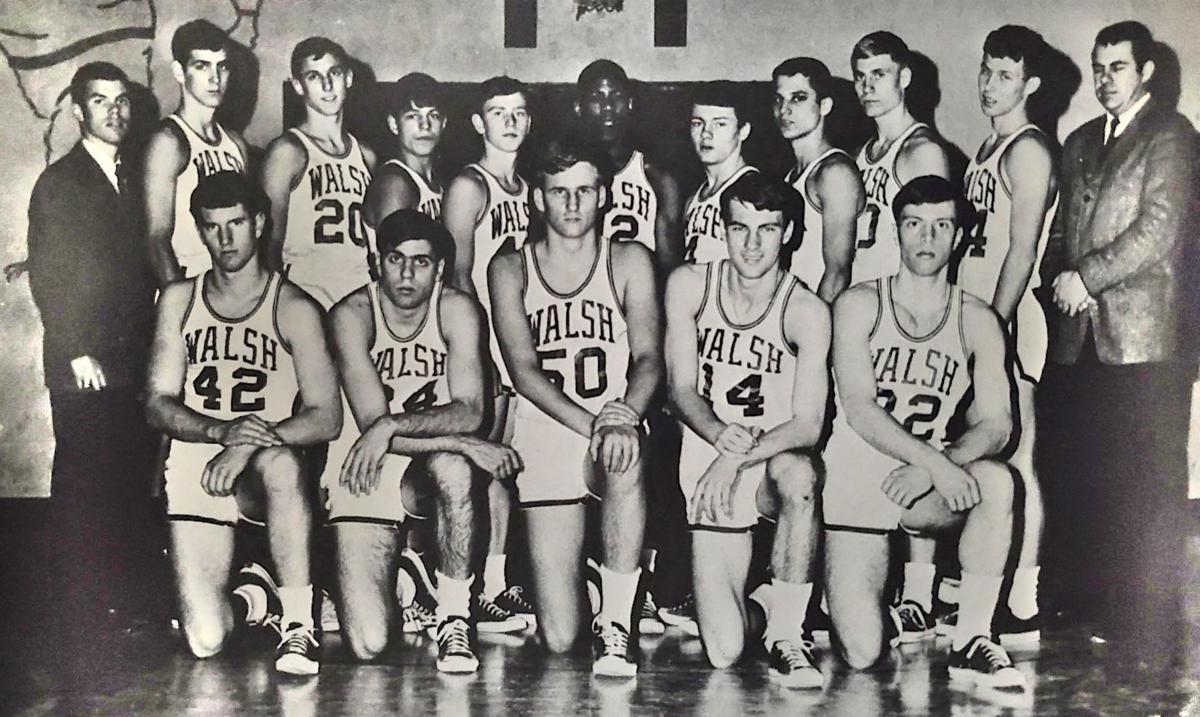 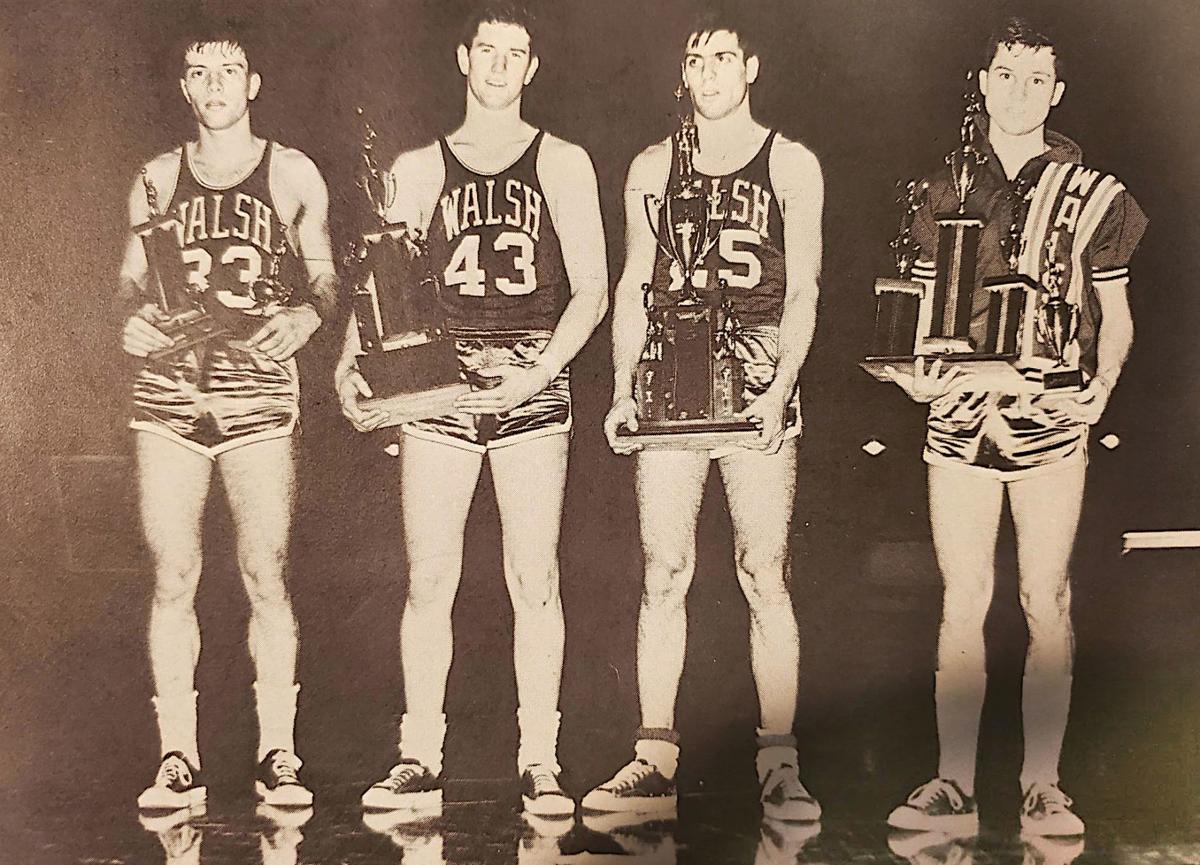 (Editor’s note: This is the next of a series in which the Times Herald and Bradford Era will present the best season/team accomplishment for every school in the Big 30. The staffs at both papers made a selection for each school based on consultation with current and former coaches and athletic directors. Today: Archbishop Walsh.)

OLEAN — The first real indication that it might be onto something special unfolded in a packed gymnasium in Erie, Pa.

The 1967-68 Archbishop Walsh boys basketball team was not only unbeaten — having topped the likes of Cardinal Mindszenty, Bishop Ford (Brooklyn) and St. John the Baptist (Syracuse) — it was virtually untouched, winning by an average of 25 points.

The Eagles, a year after falling to Timon in the Manhattan Cup semifinals, were as talented as they’d ever been (or would be), featuring a lineup that included Dan Metzler, who was recruited by Bob Cousy and went on to play at Boston College, John Karuch (Niagara), Pete Aiello (Niagara) and Steve Stayer (UB football).

Late in the season, Walsh took on a Cathedral Prep team that was not only twice the size in terms of school enrollment but would go on to win a state championship, and downed the Erie powerhouse, 70-62.

That night, the message was sent: the Eagles were not to be stopped.

“That was the highlight, beating them,” remembered Paul Duran, then a 24-year-old first-year assistant and JV coach. “They were very good, and it was on their home court. We reached our peak there.”

THIS WAS the golden era for Archbishop Walsh athletics.

In 1967, after dropping its first game of the year, the football team, under Jim Cleveland, ripped off 31-consecutive victories over the next four seasons. By the end of 1968, the basketball team had accumulated a three-year record of 54-6 under the late Ed McGuire. And in that time, it secured its biggest athletic accomplishment to date, the one for which the largest banner in the school gymnasium still hangs: the 1968 Manhattan Cup championship.

And it did so by executing one component to a Beethoven-like level of perfection: the full-court press.

“It’s funny with Ed, he almost didn’t practice a lot of offense because all he did was press,” Duran, now 76 and residing in East Syracuse, recalled with a laugh, “and every basket came off the press. I mean, he did some offense, but that wasn’t his main thing.

“Most teams were scared to death of the press, and we just killed teams with it. They couldn’t get it beyond halfcourt.”

The Eagles picked up full from the opening tip.

It was the strategic genius of McGuire, who realized early he had “the perfect people” to implement such an attack, most notably with Karuch, then a sophomore, who also starred on the baseball and track teams.

“Karuch was lightning,” Duran emphasized. “I coached Karuch in track; he was on the track team, but he never came to practice because he was on the baseball team, so I would just show him how to start … and he won every 100-yard dash that year. Now, this is hand-timed, but he ran a :9.9 100, that’s how fast he was, and the world record at the time was :9.3.”

With Karuch picking pockets, Metzler playing centerfield and Aiello covering ground in the back, Walsh raced its way to an 18-0 regular season before beating Baker (55-47) for the Smith League (Buffalo Small School) championship.

Along the way, it established itself as a 60s version of the Showtime Lakers, averaging over 80 points (before the 3-point line), including six 90-point games and two in the 100s. It became an attraction, drawing crowds of 6,000 to St. Bonaventure’s Reilly Center for the wins over Bishop Ford and St. John’s.

And it rode that style past Dougherty (61-58) and Turner (64-57) and into the Manhattan Cup title game against Canisius.

THE FINAL, played on March 17, 1968, before a crowd of 4,000 at the former Memorial Auditorium in Buffalo, matched the Canisius Crusaders against the “plow jockeys” of Olean, according to the Walsh yearbook. And though it was played in the former’s backyard, the seats were lined with green and white.

“You have to remember, we were essentially a Class D school, but we had as many fans, or more, as any school in Buffalo,” Duran said. “But we brought probably 10 busloads of fans (to that game), and they were wild.”

For Walsh, its last game was also its closest, a rare test for a team that had made beating opponents by 20 and 30 points per game so routine.

Before then, the Eagles had won only four games by fewer than double digits, two of which came in the playoff quarterfinals and semis. On this day, however, they had just a one-point lead, without the ball in their hands, before sixth man Francis “Cheech” Letro stole a Canisius pass and called timeout with 13 seconds remaining.

“So guess what happens? Cheech jumps in front of the guy, steals the ball with 13 seconds left, calls timeout.”

Back in possession, and with the championship — and redemption for its heartbreaking 1967 finish — within reach, McGuire employed one last bit of strategy to nail down a victory that would echo for decades to come.

“Now, again, this is in 1968,” Duran noted. “There’s no YouTube, you don’t see eight million games on TV like you do today. In the timeout, the deal was, put it into Danny Metzler, but don’t advance it, because they were going to set up a three-quarters court trap, but with only 13 seconds left, we didn’t have to take it to the other end; we could literally stay under their basket while time out ran out.

“Danny was an excellent dribbler, so we get the ball in, he just goes side-to-side. Canisius doesn’t know what the hell to do because they think we’re going to come down the court and they’re going to trap us. We never got to the point. Danny dribbles out the clock and we win, 54-53.”

JUBILANT, “the fans poured onto the court to carry off the No. 1 team and its No. 1 coach,” the yearbook read.

“And they did,” Duran maintained, “they were absolutely wild.”

The victory capped a perfect 22-0 campaign and the careers of co-captains Aiello and Metzler, both two-year All-Catholic choices, the latter of whom averaged a team-best 21.5 points and graduated as Walsh’s all-time leading scorer with over 1,200 points, plus senior classmates Stayer, Letro and another key cog, Ron Wilson, the team’s primary ball-handler. It also produced its share of hardware, as both Aiello and Karuch, who averaged 19 a game that year, were selected to the All-Tournament Team and Karuch, “in leading Walsh to the epitome of basketball greatness, was chosen the Manhattan Cup MVP.”

“We’ll be back!” was McGuire’s lone comment following the Eagles’ semifinal loss to Timon the year before, and the legendary Walsh coach followed through on that proclamation. To those involved with his program, he was at the center of this forever triumph.

“Coupled with the ‘never-say-die’ attitude of the ‘67-’68 Eagles, Coach Ed McGuire is the main reason for the outstanding success of the team,” an excerpt on page 79 read.

But that wasn’t the only thing that made this Archbishop Walsh team so special.

“They worked really well together,” said Duran, who’d go on to teach, coach and retire in the Syracuse area. “They didn’t have any egos. They all played their role … they were all good basketball players, but they worked well together. Cohesiveness, teamwork, whatever you want to call it, they got along well.

“Ed just had the perfect people for what he wanted to do.”