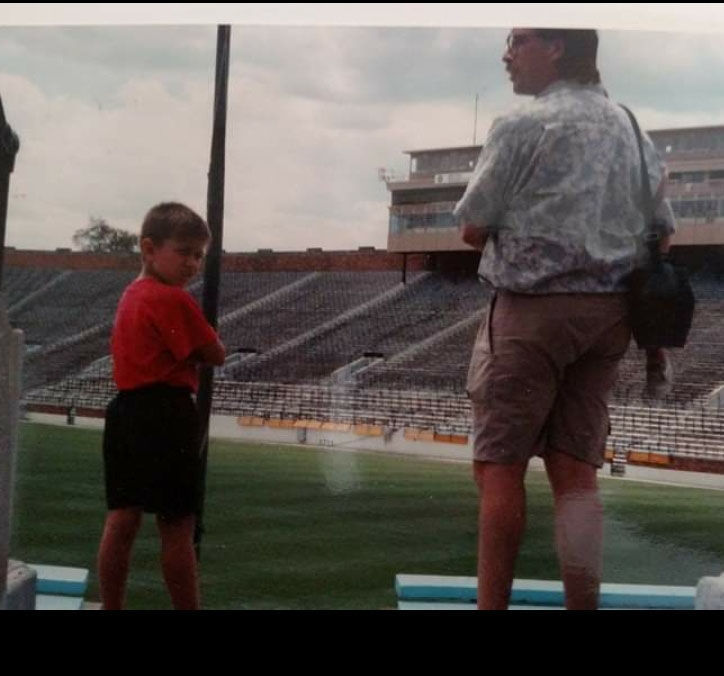 Lance Eric Baker and his father, Lance Sr., look out at Notre Dame Stadium during a family trip in the early 1990s. 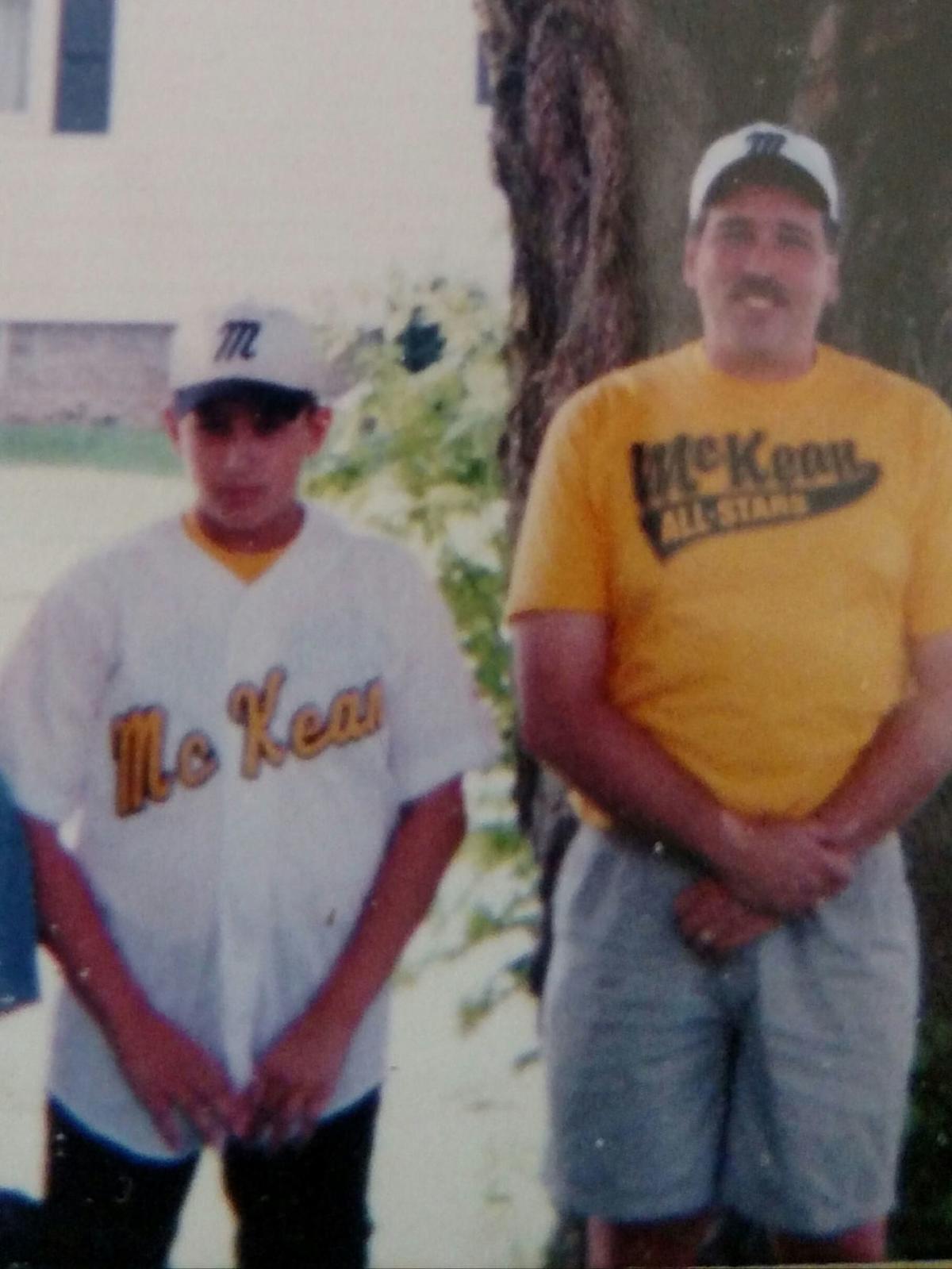 In addition to his duties coaching three sports at Otto-Eldred, Lance Baker also coached the McKean All-Stars and is pictured here with his son, Lance Eric Baker.

Lance Eric Baker and his father, Lance Sr., look out at Notre Dame Stadium during a family trip in the early 1990s.

In addition to his duties coaching three sports at Otto-Eldred, Lance Baker also coached the McKean All-Stars and is pictured here with his son, Lance Eric Baker.

In addition to his full-time teaching job at Otto-Eldred, Baker served as the school’s athletic director, head basketball and track and field coach and was an assistant for the football team.

He stepped back from some of those duties in 2000 before going on to coach another 10 years in basketball and is still involved at Otto-Eldred as a school board member.

And though there were hundreds of athletes and students that he impacted throughout his years at O-E, there was one kid who followed him around diligently long before he was even eligible to don a Terrors uniform: his son, Lance Eric Baker.

“I basically grew up in that gym or out on that football field or on the track — wherever it may be — and it pushed me towards wanting to be a coach,” the younger Baker said. “I saw that life, liked that life and it’s definitely something that I wanted to do.”

It’s no surprise then, that earlier this week, after nearly a decade as an assistant, Lance Eric continued to follow in his father’s footsteps by leading his own program when he was hired as O-E’s new varsity baseball head coach — one of the few sports Lance Sr. did not coach at the high school level.

“It was a dream come true. I keep telling people that I’m coming home,” he said after spending the previous few years coaching baseball in Port Allegany and teaching in Bradford. “I get to coach and work in Otto-Eldred.”

Lance Eric’s number one supporter over the years, his father, was of course thrilled that his son had accepted the position at a place that is so close to his heart.

“Baseball has always been his passion,” the elder Baker said. “And for him to get it at O-E is just phenomenal. I am happy and a proud papa.

“Besides that, it’s only a three-minute walk for me to the baseball park (in Eldred) to watch the games.”

SON LANCE will certainly have an invaluable coaching resource to use in his father. Lance Baker coached some of the best basketball teams in school history, including a 20-8 1996-97 season where the Terrors made it all the way to the District 9 Class A title game and he was named the Big 30 Coach of the Year. He also earned Coach of the Year in the North Tier League several times and guided the Terrors to two league titles on the track.

But when it comes to baseball, Lance Baker admits that his son might know a little bit more about the sport than he does.

“He has insight into the game that always blows me away,” Lance Baker said of his son. “There are things and little innuendos during the game that he sees that I don’t even think about.

“But then again, I coached him in Little League so I taught him everything he knows.”

Lance Eric, who has served as the Terrors’ junior varsity boys basketball coach for the last 11 seasons and was a varsity baseball assistant under Nate Zitnik at Port A for the last seven years, has learned plenty of valuable lessons from his dad over the years, but perhaps none as important as developing meaningful relationships with his players.

“I think one of the biggest things that I took away from my dad and some of those other guys like Nate is that you can’t coach every kid the same way,” he said. “You have to build those different relationships with those different kids and know how to approach them and work with them in those different ways.”

Lance Eric is far from the only former player of his dad’s to go into coaching. There’s Brian Hobbs, a basketball star in the late-1990s and early-2000s who is now the head boys coach at Bradford High. There’s Nick LaBella, who played for Baker and was Otto-Eldred’s football coach for several seasons. And there’s Matt Stebbins, who played on some of Baker’s last basketball teams and went on to coach hoops at Moniteau and is now at Laurel High School in New Castle.

And while they’d all almost certainly admit that Baker’s coaching style was a tad aggressive and wouldn’t be embraced all that fondly in today’s culture, it made a lot of kids that passed through Otto-Eldred better athletes and people.

“I look back on how he was and times have changed obviously … he’d probably be fired today with the way he used to coach,” Lance Eric said with a laugh.

Added Lance Baker, “I was a hard (expletive). Everything had to be fundamentally sound and you had to do everything down to a T. Today’s youth is a little bit different and I’m glad that he has a better grip on that than I do.”

FATHER and son both concede that so many hours spent together on the playing field could be stressful at times.

Lance Eric played just one year of football, but was a four-year letterwinner on the basketball court.

By his sophomore season, he was the Terrors’ starting point guard.

“Was it an easy thing to coach your son? No, it was never easy,” Lance Baker said. “It was a lot easier with his brother and we had some fights at times, but our relationship has always been a good one.”

The duo had some fun on the basketball court and won some games over the years, as well, though Lance Eric admits that he felt a good deal of pressure lifted off his shoulders when he got to the baseball diamond come springtime — when he got to play for someone other than his dad.

“You would always hear, ‘Oh, he’s only starting because he’s the coach’s kid,’” Lance Eric recalled. “I look back at it now and I’m like, ‘Why would you say that?’ But as a 14 or 15-year-old kid, that puts pressure on you and you are thinking of what other people are saying.

“So then when I get to start in baseball as a sophomore without my dad coaching, it’s like you are proving yourself.”

As fiery as the two may have been, that usually simmered by the time they got back home in Eldred.

Lance Eric called it one of his mom’s “unspoken rules” that what happened at the Terror Dome wouldn’t impact things at the dinner table. Still, there was only so much sports talk that the father and son duo could avoid.

“I remember him riding on team buses when he was in elementary school,” Lance Baker recalled. “He loved it even then.

“And he liked when I was involved in his sports. His senior year, it was his younger brother’s last year of Little League and I missed a lot of his (baseball) games for that and he’ll never let me forget it.”

Their relationship these days is as strong as ever, with Lance Eric calling his dad his “best friend” and seeing that strong bond get passed down to the next generation of Bakers with Lance Eric’s son, Sawyer.

“He gave the best man speech at my wedding even though I had a best man and a brother,” Lance Eric remarked.

And perhaps something that every dad loves to hear more than anything — especially around Father’s Day — is that his son really does enjoy spending time with him.

“We are like buds now,” Lance Baker said. “We go to races together, we golf and go riding side-by-side and he wants me there.