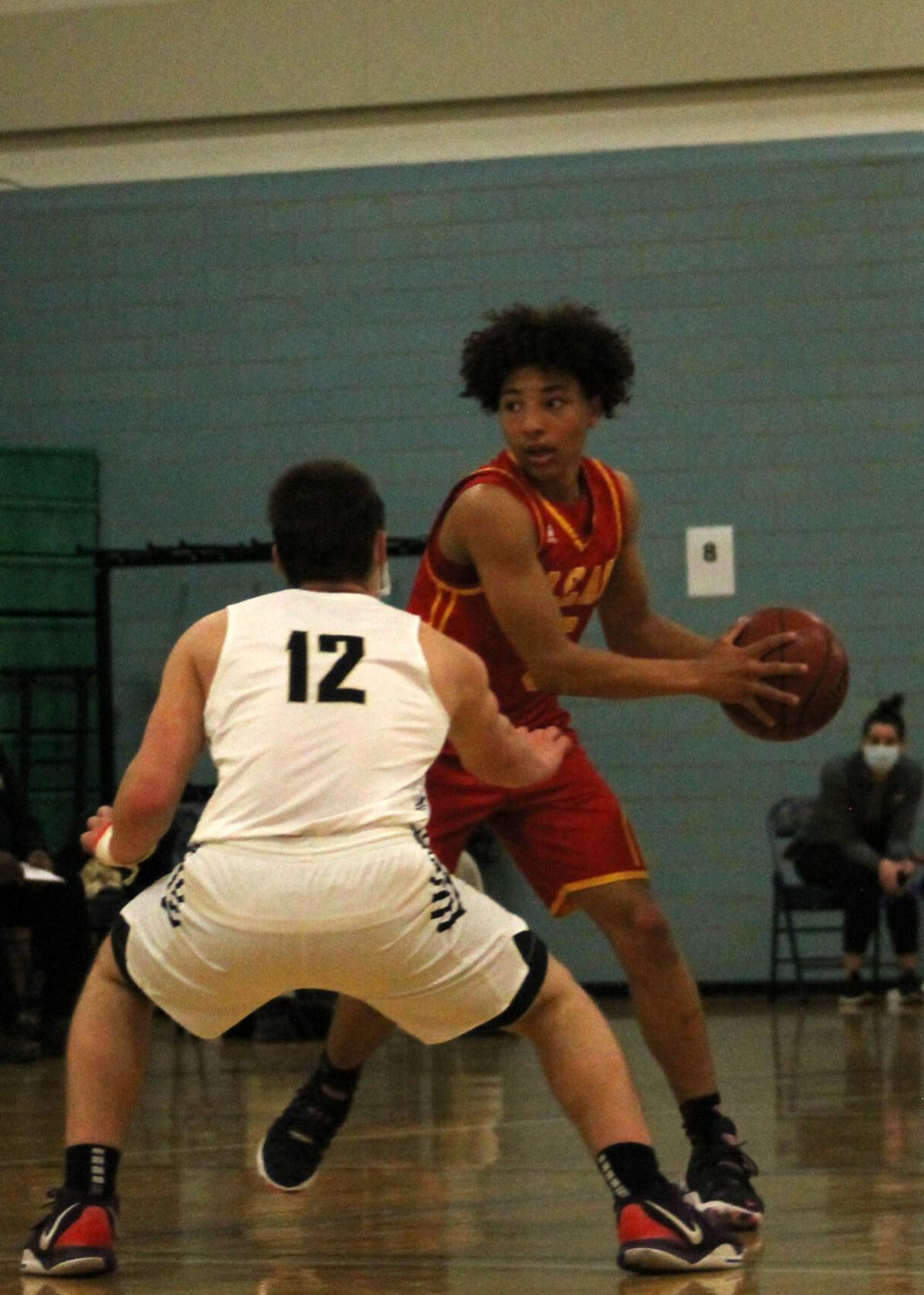 Olean’s Kamdyn McClain (5) looks to get around East’s Anthony Oberlander (12) during a Section 6 Class B1 semifinal Thursday night in Buffalo. 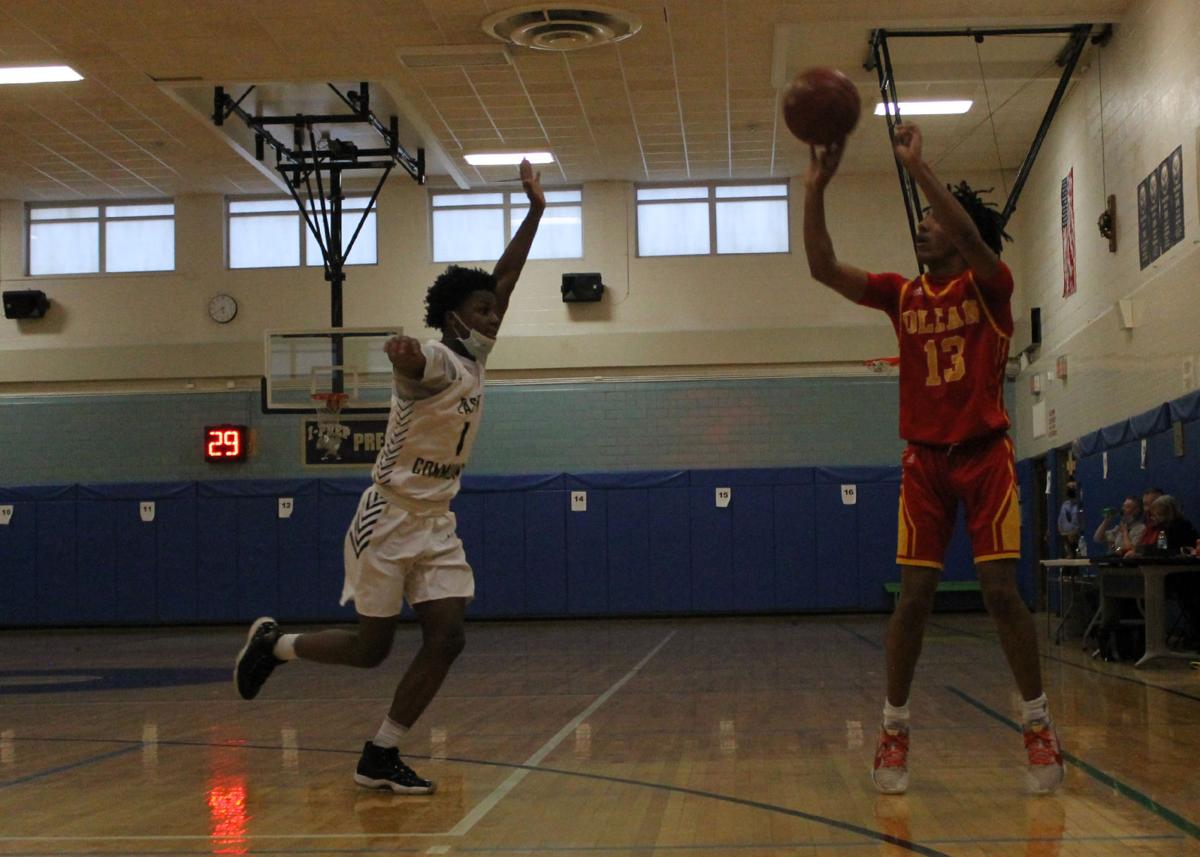 Olean’s Kaleb Ramadhan (13) shoots a 3-pointer as East’s Angel Dean (1) rushes over on defense during a Section 6 Class B1 semifinal Thursday night in Buffalo. 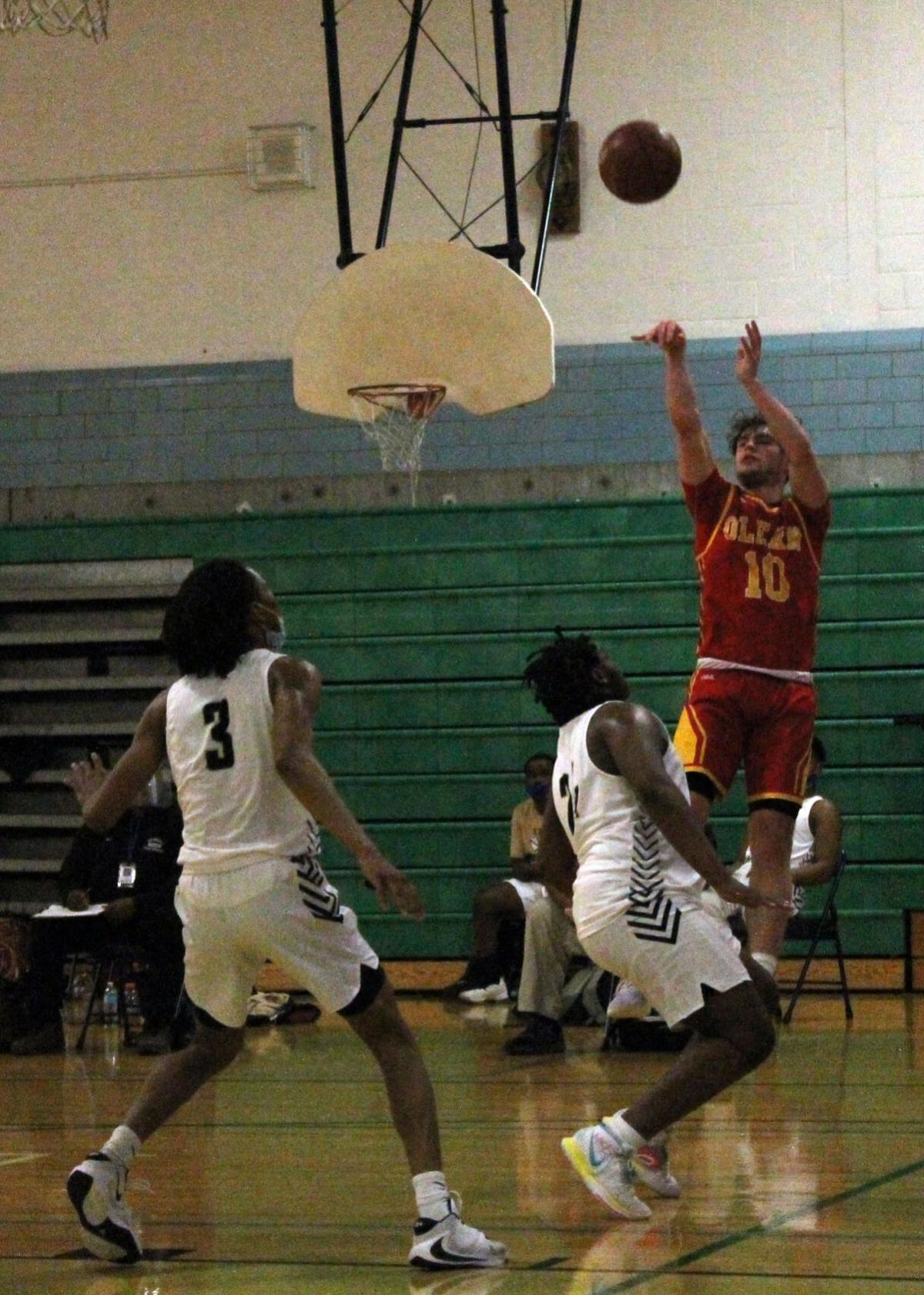 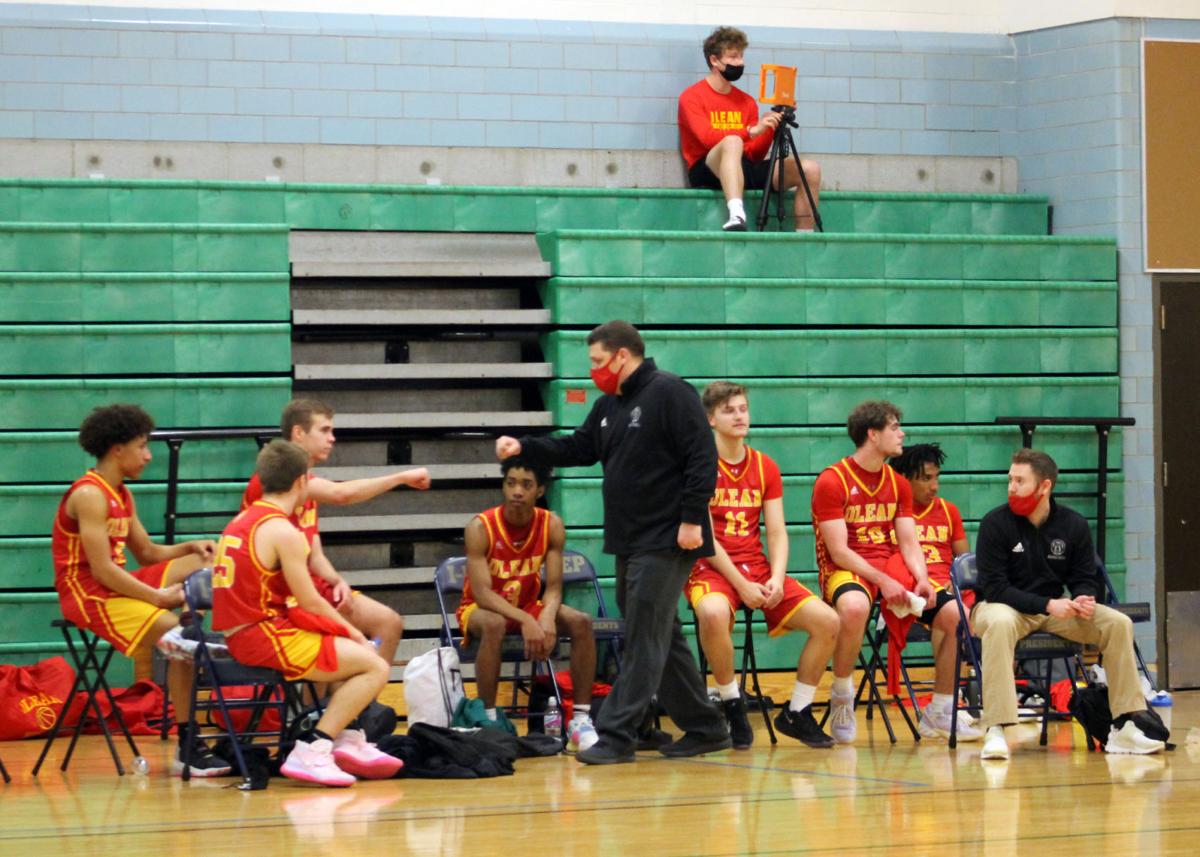 Olean coach Tim Kolasinski congratulates his players on the sideline late in the fourth quarter of a Section 6 Class B1 semifinal win over East High Thursday night in Buffalo. 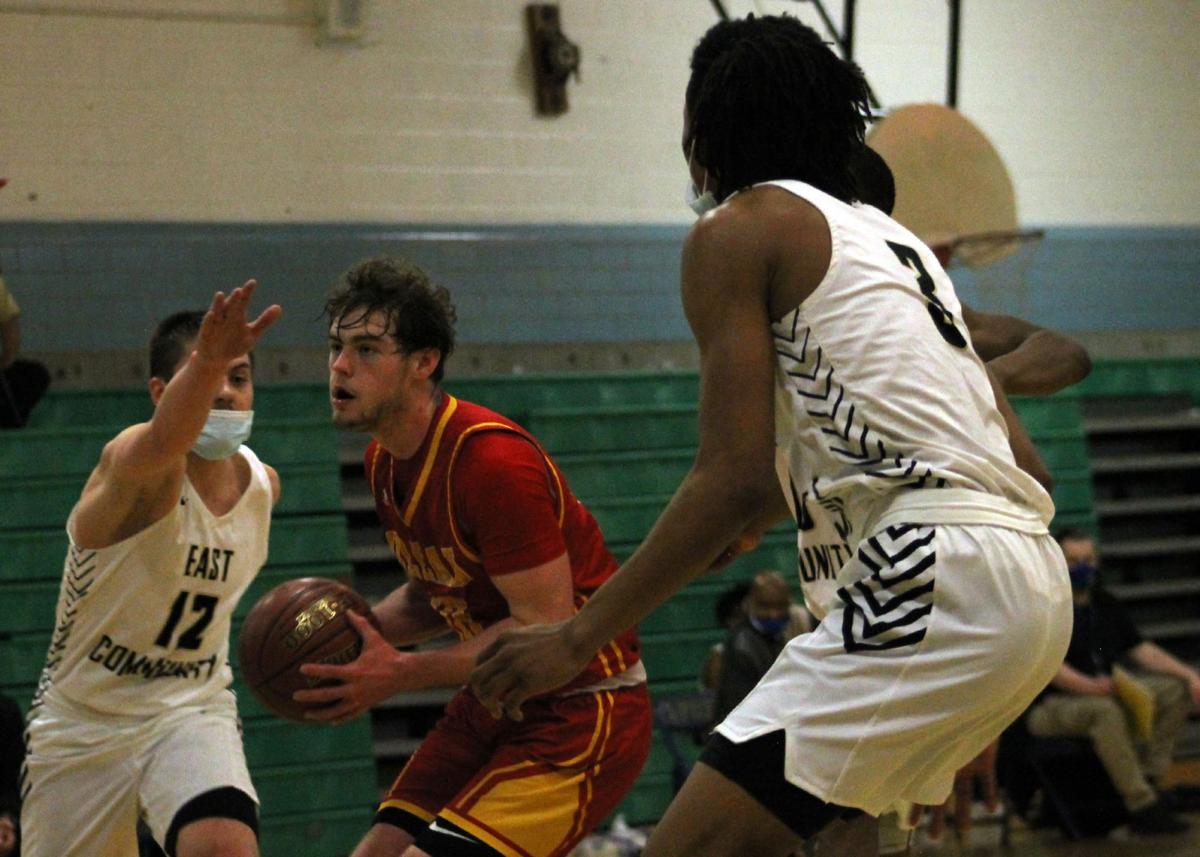 Olean’s Jason Brooks looks to get to the basket against East High during a Section 6 Class B1 semifinal Thursday night in Buffalo.

Olean’s Kamdyn McClain (5) looks to get around East’s Anthony Oberlander (12) during a Section 6 Class B1 semifinal Thursday night in Buffalo.

Olean’s Kaleb Ramadhan (13) shoots a 3-pointer as East’s Angel Dean (1) rushes over on defense during a Section 6 Class B1 semifinal Thursday night in Buffalo.

Olean coach Tim Kolasinski congratulates his players on the sideline late in the fourth quarter of a Section 6 Class B1 semifinal win over East High Thursday night in Buffalo.

Olean’s Jason Brooks looks to get to the basket against East High during a Section 6 Class B1 semifinal Thursday night in Buffalo.

The Huskies (12-4) bombed in five first-quarter 3-pointers to take a 31-9 lead over top-seeded East High playing on the International Preparatory School court at the old Grover Cleveland High School building. Olean finished with 18 3-pointers and cruised to a 91-69 victory over East, never letting its lead fall closer than 16 points.

“I think early on obviously we hit a number of 3s and that was big,” second-year Olean coach Tim Kolasinski said. “To be honest with you, early on I thought the turnovers and the stuff we got in transition was the big difference. As the game went on I thought our ball movement was very good, and it led to some really good looks and we knocked them down tonight.”

Brooks leads the Huskies with 21.9 points per game. He’s become the team’s go-to scorer after playing a more traditional point guard role for the 2019-20 Huskies, but still can be shooter or facilitator, Kolasinski said.

“Jason has done a phenomenal job,” Kolasinski said. “Back when he played JV for me, he was more of a scoring guard. And then last year because of the team that he was on, he did distribute the ball a lot more. He was an able scorer. This year he has done a tremendous job doing both. And I say that not only because it’s evident that he’s done it, but also because I think he’s getting the best shot defensively from the other team. And he’s still able to handle the ball, whether it’s against full court pressure, people trying not to let him get the ball back....so he’s still facilitating for others but he picks his spot and he knows when he has to step up and he’s done that in some big spots for us this year.”

Olean will make its 13th sectional championship appearance in the last 15 years. The Huskies will seek their 13th title in that same span and their fourth consecutively when they visit No. 2 Bennett on Saturday at noon.

The season will end either way on Saturday for Olean, as the NYSPHSAA canceled its winter championships, and the sectional games aren’t at traditional site Buffalo State College, where Huskies teams have made countless memories in recent decades.

Olean didn’t seem to mind playing in the small I-Prep gym, a quiet affair with no fans in attendance and no public address announcer.

Kolasinski admitted he wasn’t sure how his team would react to playing a big game in that setting.

“If you would’ve asked me this question yesterday I would’ve said ‘I’m really not sure how we’re going to treat this,’” he said. “But that was kind of our message before the game today was ‘is that stuff is really nice because the kids work so hard to get to that level, to get to that stage.’ But ultimately we said....they told us there was going to be no anthem, no starting lineup, whatever. We said you know what guys ‘let’s just go play basketball.’ What we boiled that down to was that even at the bigger stage, that’s the essence of everything. So obviously something took hold and they came out and they played basketball tonight.”

Brooks said was happy just to get a chance to play this year, so he didn’t dwell on where the sectional games are held.

“We love to play at Buff State, but I don’t think it really matters where we play,” Brooks admitted. “We’re going to travel however far we need to to play a game and win.”

“It feels really good,” he added of returning to the finals. “I’m really glad we even got a chance to do this, to have a season, so we’re just really happy we get the chance to do that. “

Olean got hot from 3-point range with transition offense and crisp passing to the open man in the half court. Kolasinski said ball movement has long been a priority for the Huskies.

“We work a lot on passing in practice,” he said. “We probably do it (in) some non-traditional ways. We do it against some pressure defense and it is … hopefully it’s ingrained at this point. And what we say is ‘we want to play team basketball.’ In other words we use the term ‘share the game.’ And I think they did that tonight in finding open guys.”