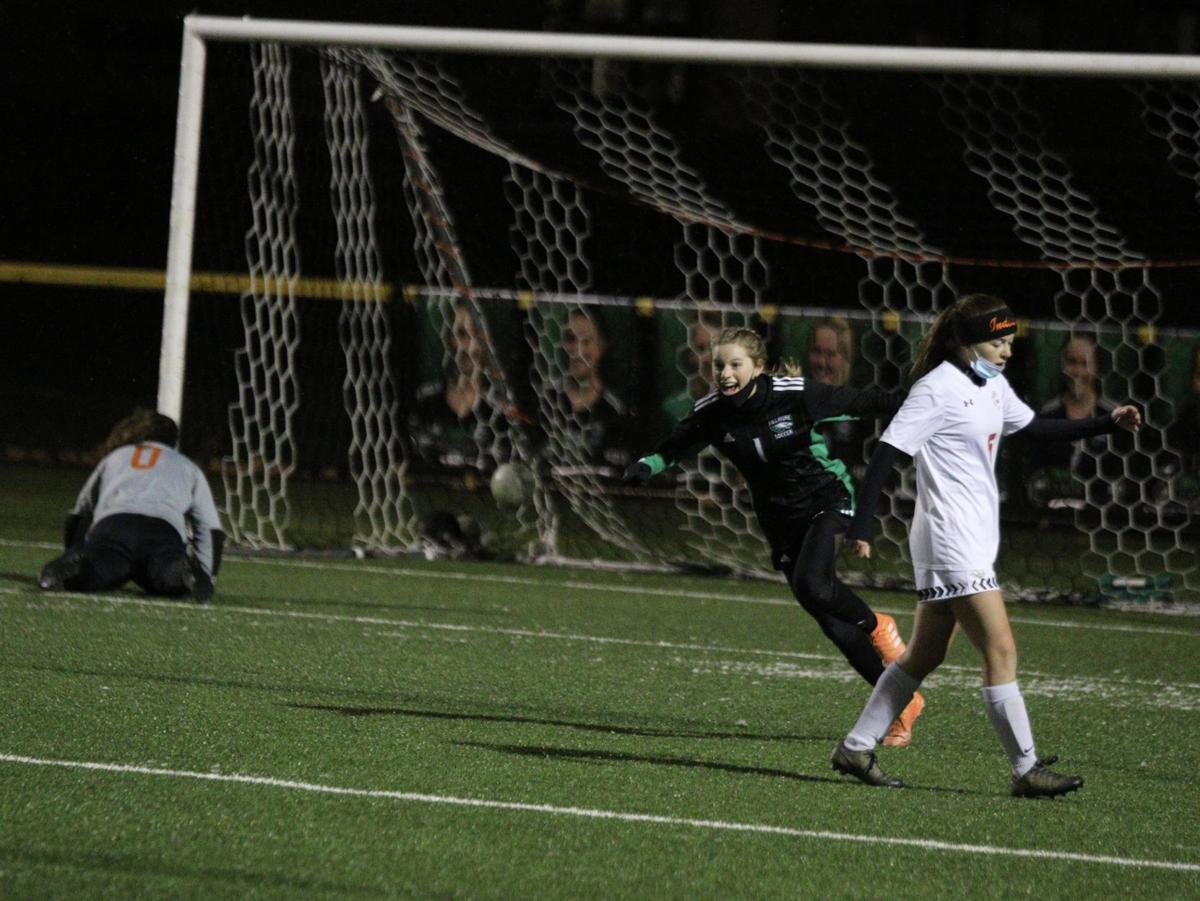 Fillmore’s Sophia Templeton (1) runs back in celebration after scoring the game-winning goal against Keshequa in the second of the two sudden-death overtime periods in Tuesday’s Section 5 Class D1 semifinal game in Fillmore. 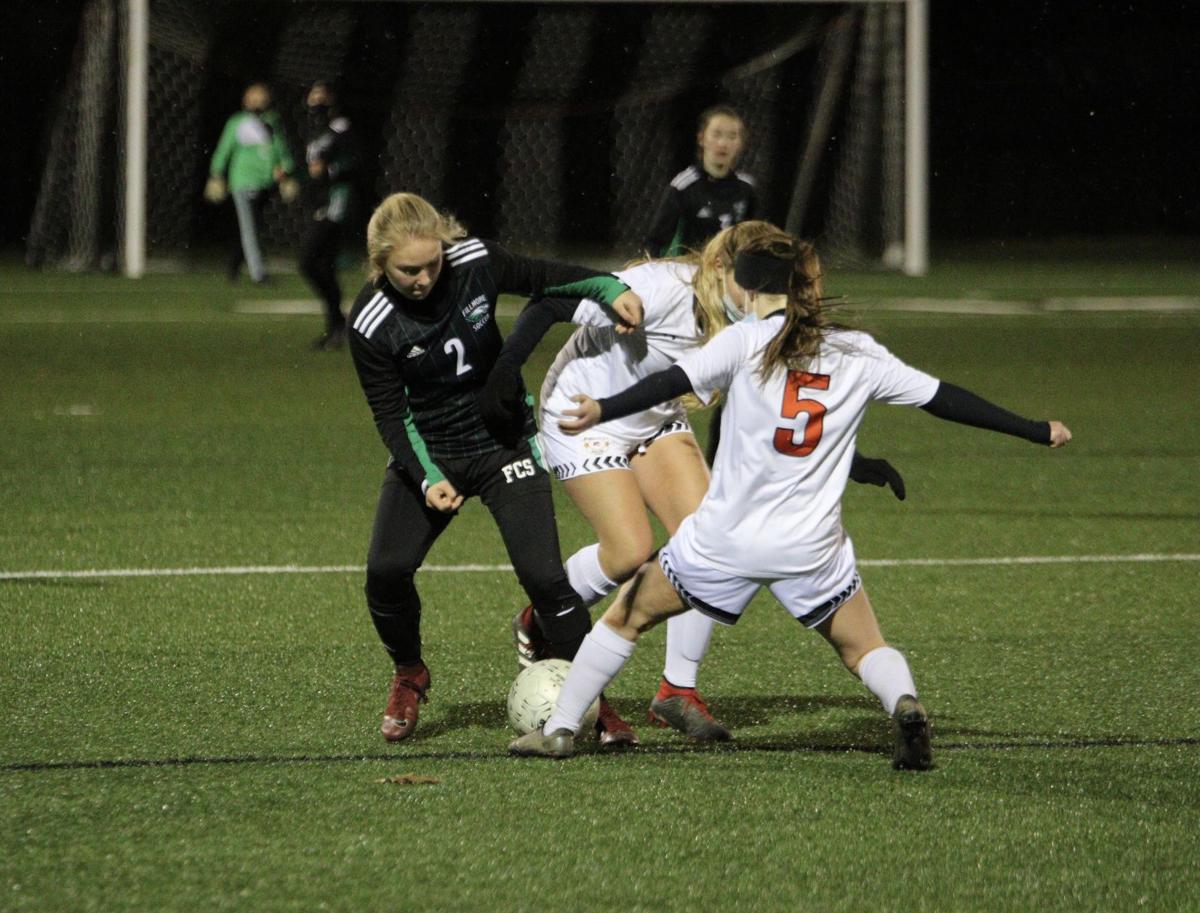 Fillmore’s Sophia Templeton (1) runs back in celebration after scoring the game-winning goal against Keshequa in the second of the two sudden-death overtime periods in Tuesday’s Section 5 Class D1 semifinal game in Fillmore.

And another trip to the sectional finals.

In a game that at times looked like it was going to be an early exit for the bracket’s top seed, the No. 1 Fillmore girls soccer team rallied to defeat No. 4 Keshequa, 3-2, in a Section 5 Class D1 semifinal.

Trailing 2-1 with less than five minutes to play in regulation, Zoe Beardsley buried a direct kick for the Eagles to send the game to overtime.

Nothing separated the two teams through two 10-minute overtime periods, which prompted two sudden-death overtime stanzas, each of which were scheduled to last five minutes. While the game seemed destined to go to penalty kicks, Fillmore broke through with 3:49 to play when Hope Russell connected with Sophia Templeton, who found the back of the net and sent the Eagles to a thrilling victory and the ‘D’ final for the third-straight season.

The goal came in the 107th minute of play.

“There were a lot of big plays and big time players in this game,” Fillmore coach Jon Beardsley said. “At different times, different players stepped up and helped us to victory.”

The Eagles had trailed at two different points during the game, as MacKenzie Gillen got Keshequa on the board in the eighth minute on a goal assisted by Heather Moriarty. Fillmore answered five minutes later, however, when Grace Russell scored on an assist from Malory DeRock.

Catrina Pierce gave the Indians a halftime lead on a 24th-minute goal that was also assisted by Moriarty, setting up the Eagles’ late-game heroics.

“The girls had to dig deep both physically and mentally to grind out this win,” Beardsley said. “We found ourselves down two times in this game, and as regulation wound down, we stuck with it and got the equalizer.”

Beardsley’s goal was her fifth of the year, while Templeton’s game-winner was her 17th of the season.

“(Templeton, also a track and field standout) can run forever and still had a second gear in her in the second overtime,” Beardsley said. “Her effort and then her skill finished off the game winner.”

Each team had its fair share of chances in the contest, as Fillmore outshot Keshequa, 15-13. Preslee Miller made nine saves in goal for the Eagles, while Aurora Sabins made nine saves for the Indians.

Beardsley commended his team’s effort, saying that “heart” was the best way to describe the Eagles’ performance.

“We had girls playing on one leg, girls playing 107-straight minutes, and girls just picking each other up, supporting each other and playing for each other,” Beardsley said. “Keshequa is a very tough team in all facets of the game and to come away with a victory, you know you earned it. “

Fillmore improved to 14-0 on the season, and will take on No. 3 Arkport/Canaseraga for the Class D1 championship on Thursday. The Eagles are the defending champions of the class, as they beat Kendall in last year’s championship game after falling to the same opponent the year before.

“I’m not sure physically what we will have in us come Thursday, but I think tonight showed us all they can dig deep within,” Beardsley said. “I told my team that we are going to play as many games as you are allotted to play (making it to sectional class finals). Be grateful for the opportunity to play. I can assure you the girls did that tonight.”