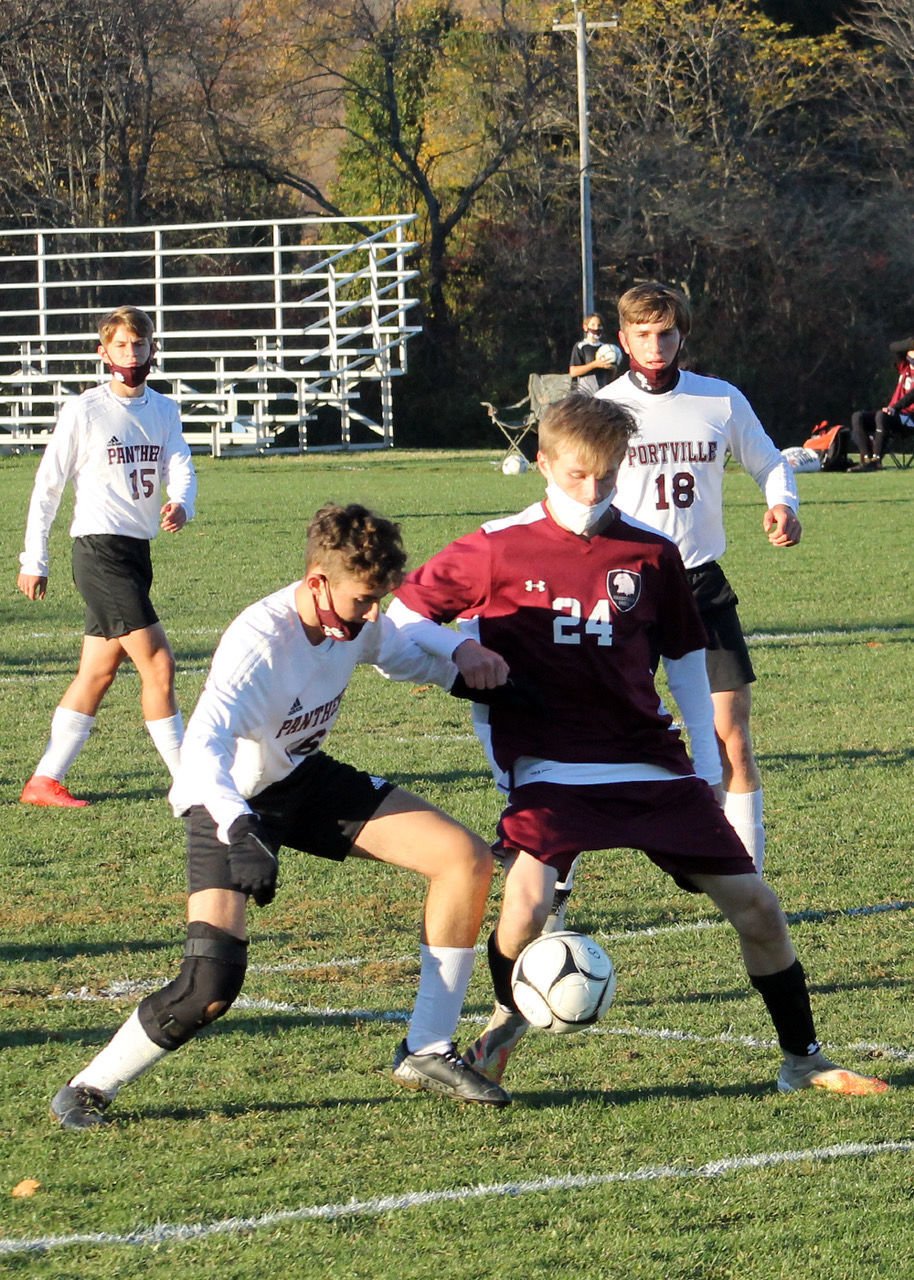 Ellicottville’s Mitchell Azcarate (24) and Portville’s Thomas Carls (16) fight for possession while trying to keep the ball in bounds in a CCAA East boys soccer game Friday afternoon against Portville in Ellicottville. 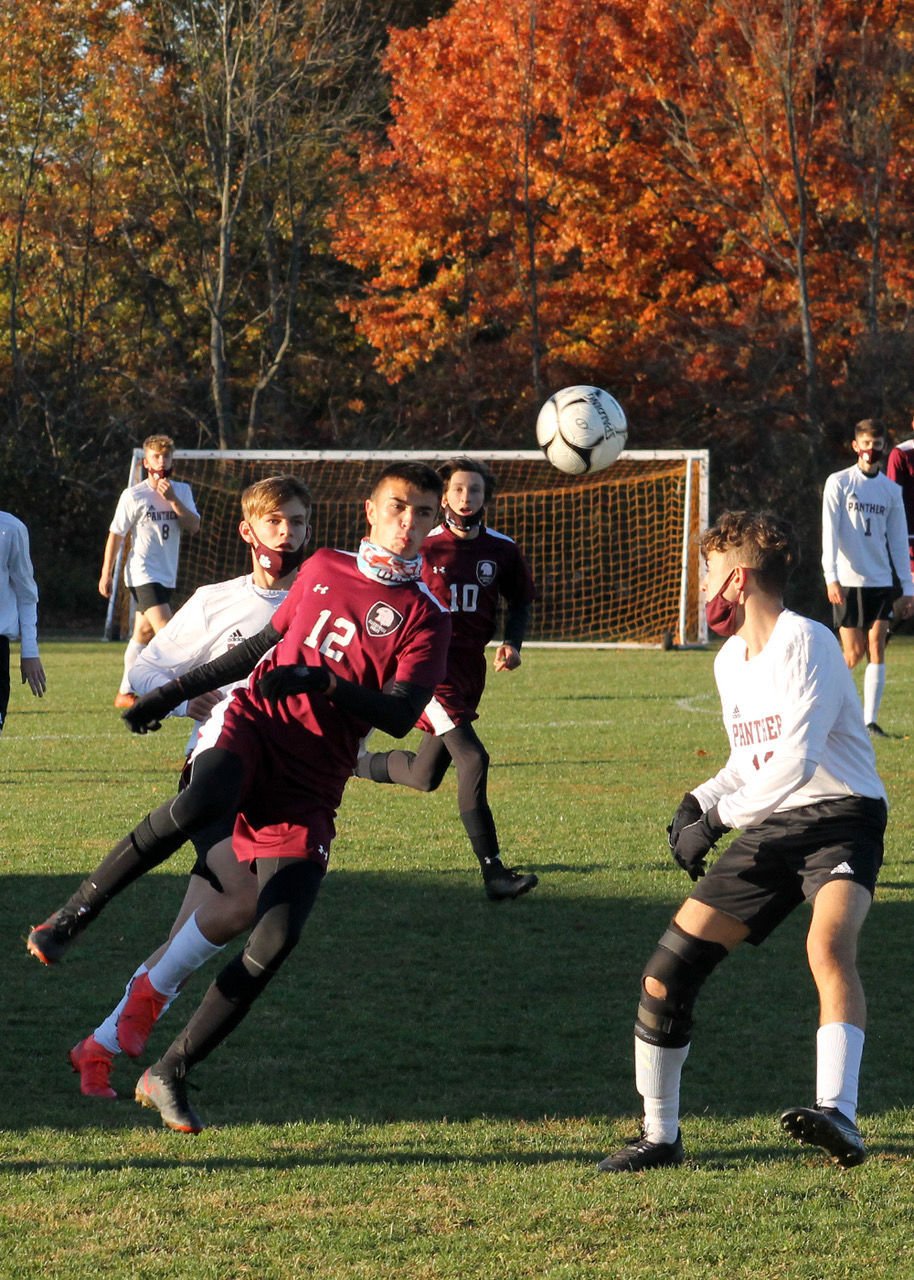 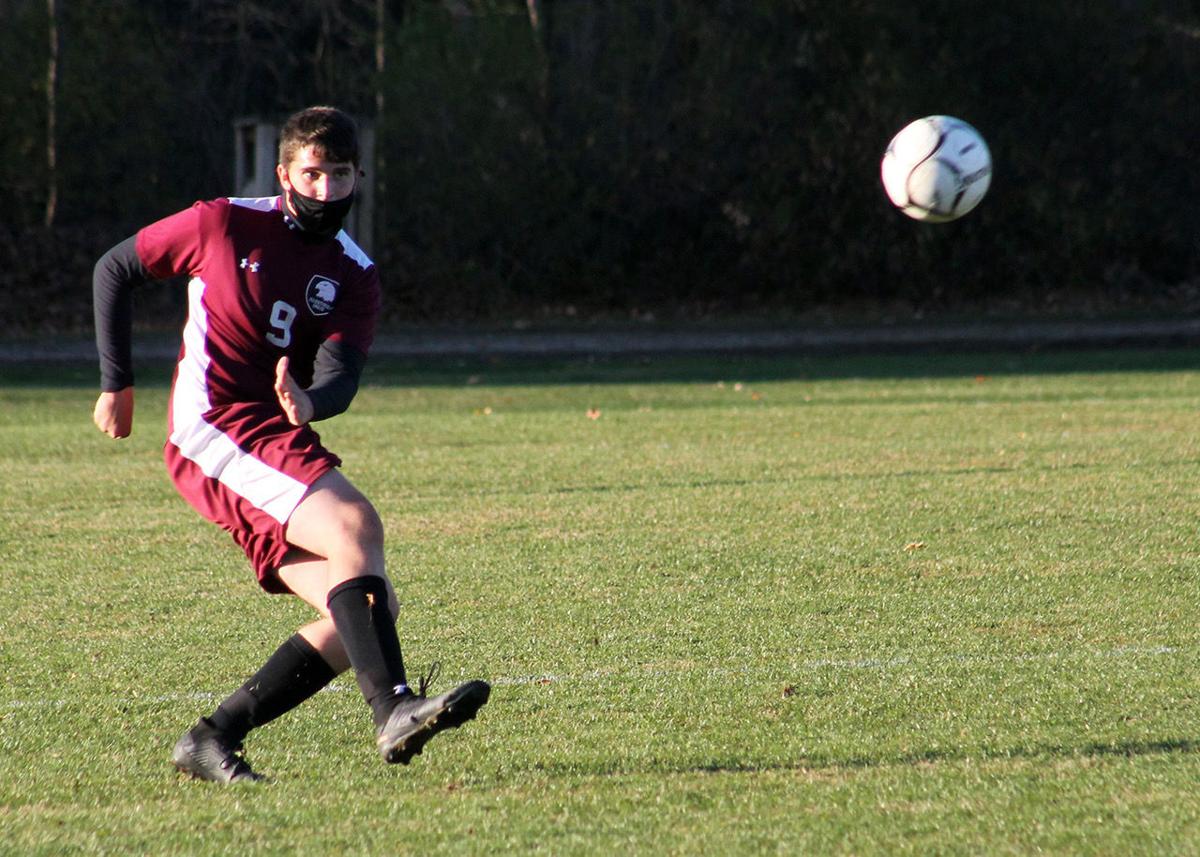 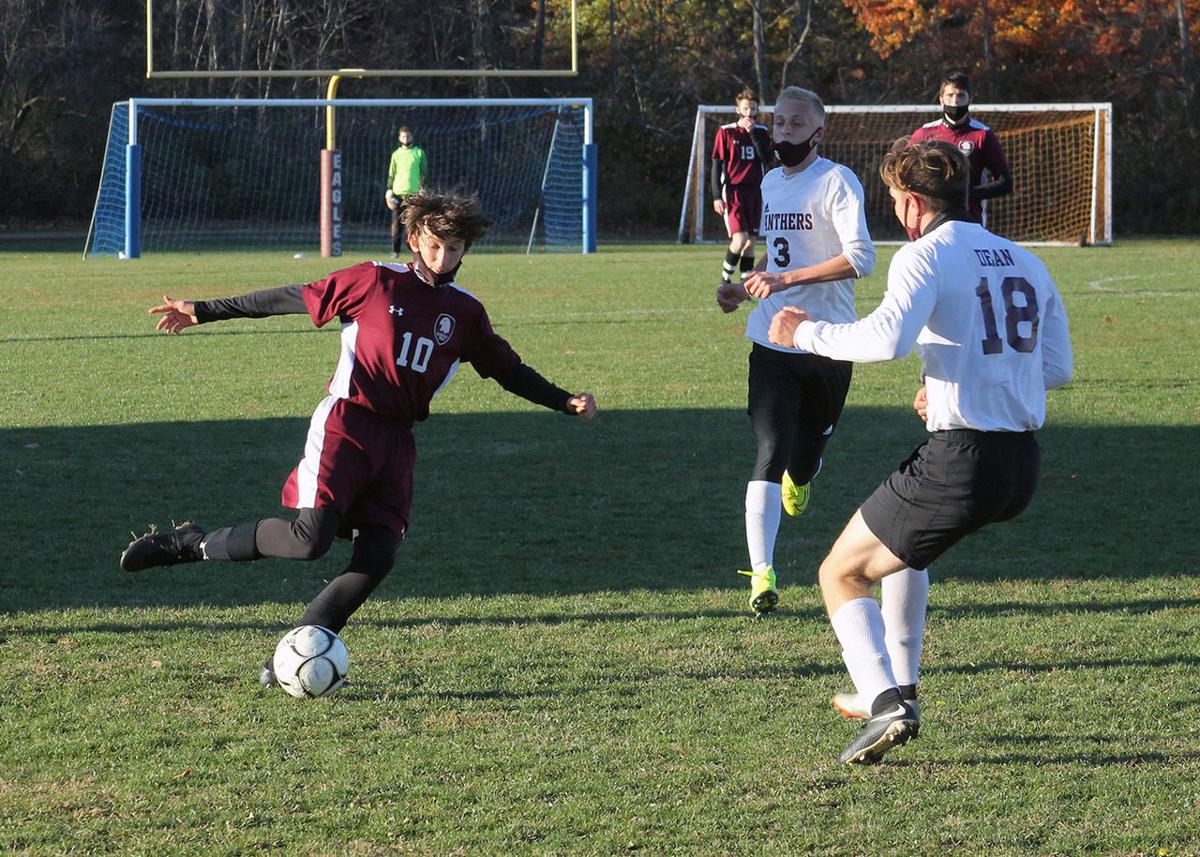 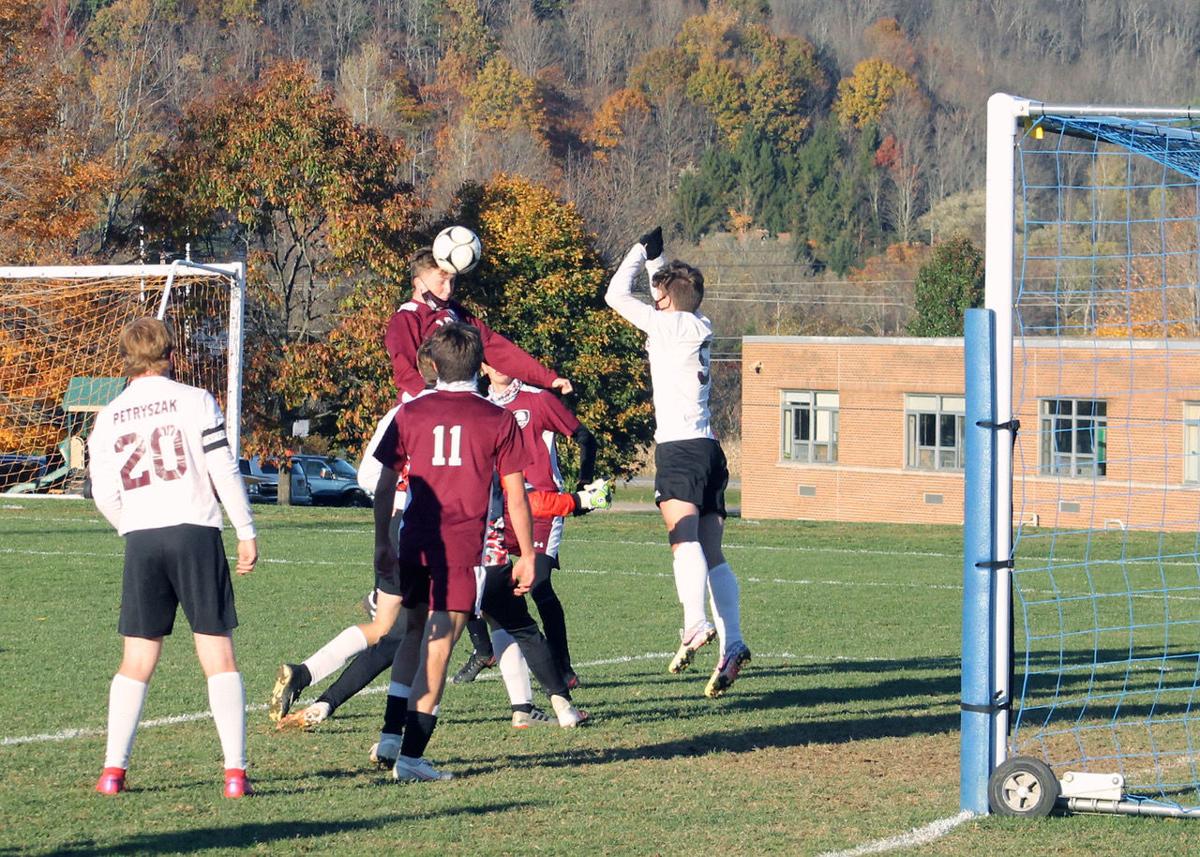 Ellicottville’s Ryan DeKay (18) hits a header over the Portville defense to score the first goal in a CCAA East boys soccer game Friday afternoon against Portville in Ellicottville. 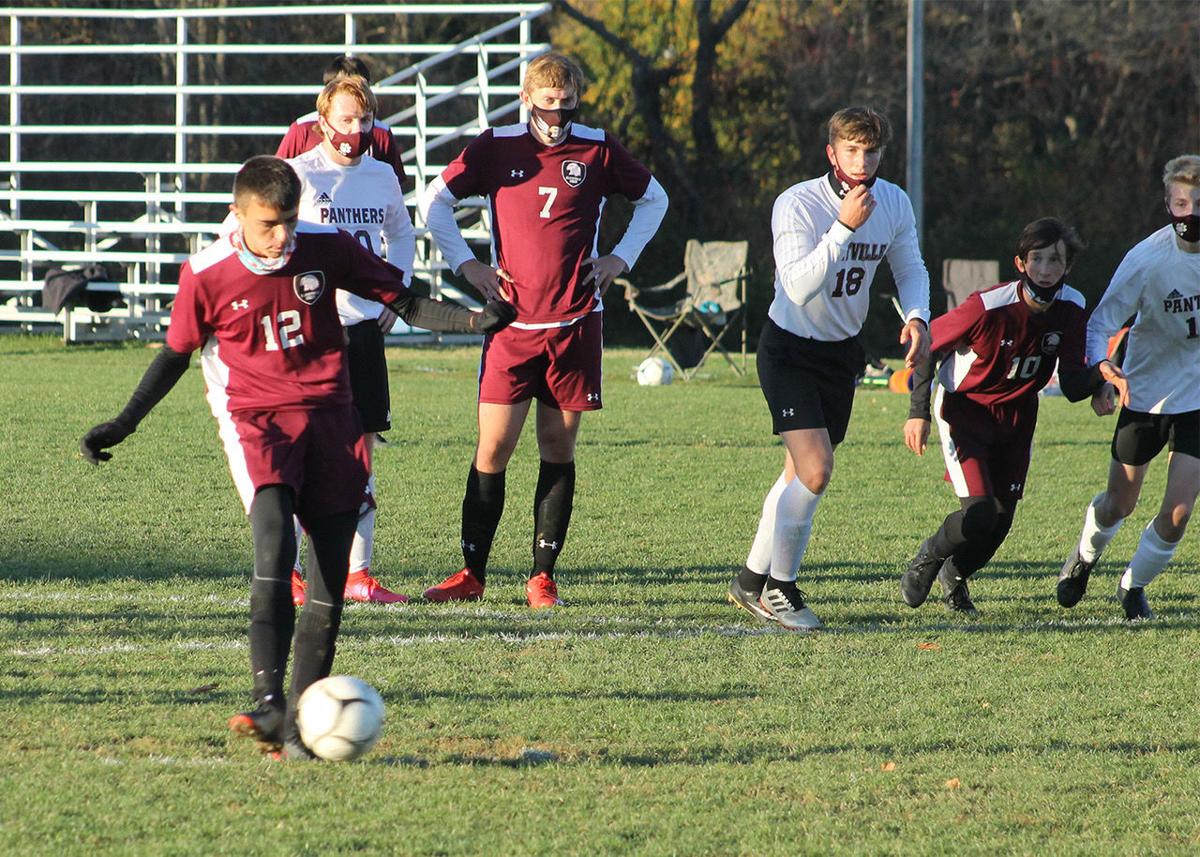 Ellicottville’s Mitchell Azcarate (24) and Portville’s Thomas Carls (16) fight for possession while trying to keep the ball in bounds in a CCAA East boys soccer game Friday afternoon against Portville in Ellicottville.

Ellicottville’s Ryan DeKay (18) hits a header over the Portville defense to score the first goal in a CCAA East boys soccer game Friday afternoon against Portville in Ellicottville.

ELLICOTTVILLE — Ellicottville boys soccer coach Matt Finn made a move to get one of his best players, senior co-captain Bryce Butler, more involved on offense.

Butler typically plays in the midfield, but Finn moved him up to forward for most of Friday night’s CCAA East game against Portville. Butler made good on the move, scoring twice in the Eagles’ 3-2 victory.

Both of Butler’s scores gave the Eagles (3-2-1, 2-0-1) a two-goal advantage at the time. Ryan DeKay scored in the 18th minute on a header, assisted by Alex Hunt in a crowd in front of the net off a corner kick. Little more than 10 minutes later, Butler buried a penalty kick for a 2-0 lead after teammate Mitchell Azcarate drew the call off an apparent trip in the box.

Nate Petryszak scored for Portville with 3:19 left in the first half with a Nick Harmon assist. But Butler scored again less than three minutes into the second half for a 3-1 lead on Azcarate’s assist.

Portville scored both its goals in the last five minutes of each half. Michael Cole scored with 4:01 to play, and Ellicottville withstood a desperate attempt to tie the game in the closing minutes. Portville’s last chance at a play on net ended with 30 seconds remaining with an offsides call, allowing the Eagles to clear the ball and finish the game.

“I think we probably just ran out of gas,” Finn said. “Their intensity just kind of seemed to pick up at the end and we just kind of didn’t quite match it at the end.

“We played probably 65 minutes of really solid soccer and then the last five of the first, last ten of the second we let them come back. They’re a tough team, they moved the ball real well, their triangles are fantastic, they did a really nice job.”

“They were playing fast, they were playing physical and we weren’t matching it for a majority of the first half,” McIntosh said. “I thought the last 15 there (in the first half) we started giving it back a little bit and then they got that quick one after the second half started to put them up two goals. I think that kind of flattened us out even more, just getting pumped up to go back out in the second half and then boom, another goal as quick as it was. That took the wind out of our sails from the first half.

“(We were) developing confidence and playing more physical the last 20 minutes there I thought it was a majority of being able to connect to feet and find the open space and then we started playing together as a team, which made all the difference.”

“With everything that’s going on everywhere, we lost a game with Salamanca on Wednesday,” Finn said. “With that and with the .500 rule for playoffs this year, every game means a little bit more right now. The playoff seedings are going to be smaller, and then home field advantage throughout the playoffs, all that stuff.”

McIntosh said “every game is a playoff game” under the .500 rule.

“You don’t make that .500, you’re just done,” he said. “You see it with other teams and other leagues and stuff, you fall down early, you’re going to be scraping every league game the whole rest of the year trying to make the playoffs. We were fortunate to get the 2-0 start, but dropping this one today, we’ve just got to hit the reset button and then go right in and Monday we play Pine Valley.”