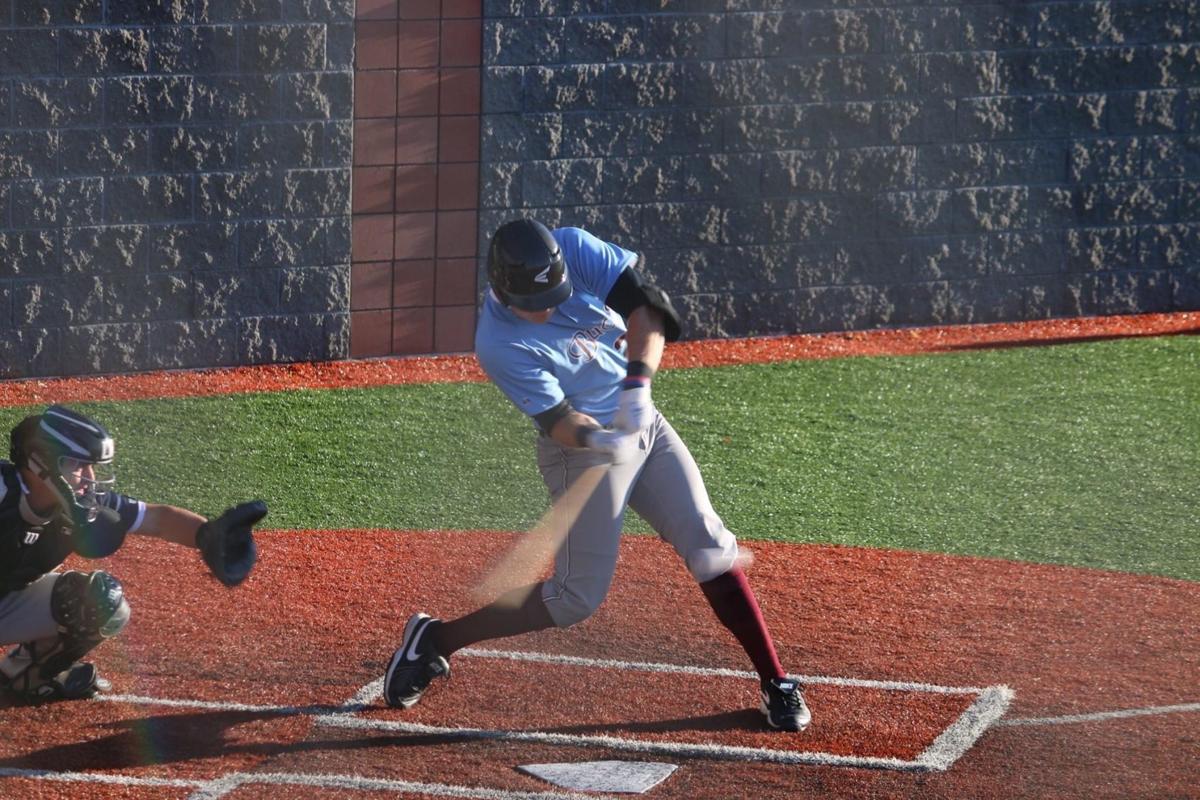 Bradford native Danny Manion connects on a pitch during the first game of his season as a member of the Tri-State League’s DuBois Bucks last Friday night. 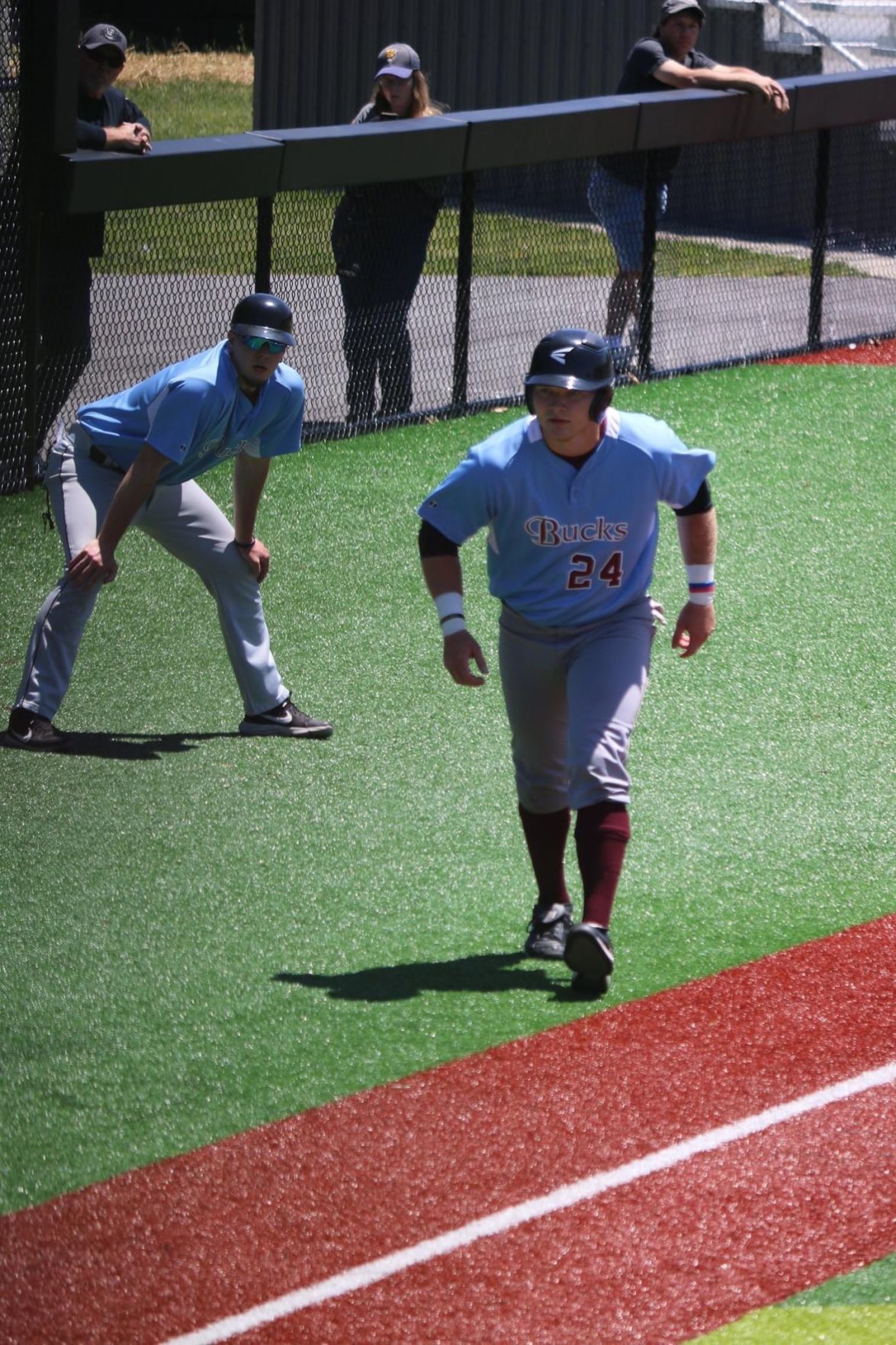 Danny Manion leads off third base during a Tri-State League baseball game in DuBois last Saturday.

Bradford native Danny Manion connects on a pitch during the first game of his season as a member of the Tri-State League’s DuBois Bucks last Friday night.

Danny Manion leads off third base during a Tri-State League baseball game in DuBois last Saturday.

DUBOIS, Pa. — Danny Manion wasn’t sure if he’d be able to play organized baseball this summer.

But the Bradford native, who had his redshirt freshman season with St. Bonaventure cut to just four games, ended up as one of the lucky collegiate athletes.

The 2018 Bradford Area High School graduate was originally set to spend these summer months with the Genesee Rapids of the New York Collegiate Baseball League.

Manion was going to stay with a host family in Houghton and live in Allegany County for the duration of the season, but because of the coronavirus and concerns with having so many kids from different areas come to town, the Rapids decided to cancel their season. The NYCL followed suit soon after and shuttered the league for 2020 altogether.

And that’s when Manion heard about the DuBois Bucks.

“Right after the school year ended I was searching around for a team and my roommate actually told me about the (Bucks) and told me about a player who used to play for Bona,” Manion explained. “I texted him and saw if they had any spots, and the coach, Dan Bowman, responded and let me on the team as a first baseman.”

The Bucks, an expansion team playing in the Tri-State League based out of Youngstown, Ohio, seemed like a perfect fit for Manion, and not just because they gave the 6-foot-3 infielder a spot.

MANION SAID that he and Shaffer had been playing together since they were 13 years old, and to suit up with his Bona teammate after having their seasons wiped out has been “so awesome.”

And on that first day of practice, Manion, Shaffer and the rest of their teammates felt like kids on the little league diamond again.

“It honestly felt amazing to get back out there,” Manion said. “It was probably the spark I needed for my summer to get going. I was kind of going through the motions at home throwing and hitting with my brother.

“I had to find a net to hit into or a cage behind the house or even hitting a wiffle ball. It was great to go down to DuBois.”

Manion still lives in Bradford for the summer and commutes to DuBois for games and practices.

The Bucks originally weren’t allowed to play in front of fans, but with Pennsylvania’s new guidelines they are now permitted to have as many as 250 people in attendance for games at the pristine Showers Field or at their secondary home of Stern Field.

As for safety precautions, Manion said that players get a temperature check before every game and interactions between players, coaches and umpires are limited, but once the national anthem is played and the warmups are concluded, it feels like baseball as usual — just as soon as some of those cobwebs were dusted off from the season opener.

“WE HAD our first game (last) Friday night and we won that game 3-2 and honestly, it was just incredible to go back out on the field,” Manion said. “I DH’d that game and the first pitch I just kind of watched … I didn’t take a swing or anything but at the same time it felt good to be back.”

Manion went 1-for-2 in that opening game and was hit by a pitch twice.

“In that first at-bat I ended up grounding out to the shortstop, but honestly it was just great to see a pitch again and make contact.”

The Bucks won their season opener, and then split a doubleheader against Butler on Saturday.

But regardless of how they did on the scoreboard in that opening weekend, the team — made up of players from all different levels of college ball as well as graduating high school seniors — was thrilled to even just have an organized place to play the game they love.

“Everyone is just having a blast every time we step out on the field,” Manion said. “There’s no negativity, and we are all just thankful. No complaints; we are happy to be out there again.”

The Bucks return to the field on Saturday in DuBois against the Steel City Blacksox. Game tickets are $5 for adults and $3 for kids. Fans can also view all home games on a free live-stream available on the team website and view the rest of the 2020 schedule at www.duboisbucks.com.