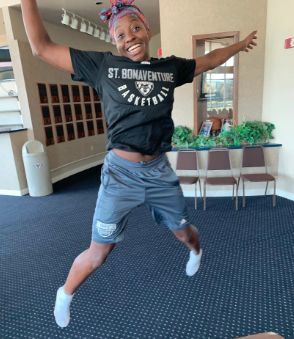 Asianae Johnson, top scorer for St. Bonaventure women’s basketball, provided the inspiration for her team, the men’s team and Paul Brown Motors to stage a fundraiser throughout February to help Genesis House. 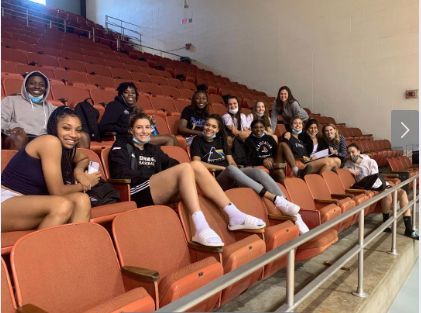 St. Bonaventure’s women’s basketball team, which is participating in a fundraiser for Genesis House throughout February, are shown during a leisurely moment.

Asianae Johnson, top scorer for St. Bonaventure women’s basketball, provided the inspiration for her team, the men’s team and Paul Brown Motors to stage a fundraiser throughout February to help Genesis House.

St. Bonaventure’s women’s basketball team, which is participating in a fundraiser for Genesis House throughout February, are shown during a leisurely moment.

ALLEGANY — As the child of a single mother, Asianae Johnson experienced homelessness, but was able to overcome the hardship through later successes in education and athletics.

Today, Johnson and her teammates on the St. Bonaventure University women’s basketball team will help the area’s homeless by participating in a fundraiser staged by the women’s and men’s teams to support the Genesis House homeless shelter. During the women’s 2 p.m. game today at the Reilly Center, $1 will be donated to Genesis House by St. Bonaventure men’s basketball head coach Mark Schmidt, women’s basketball head coach Jesse Fleming and Paul Brown Motors for every free throw made by the team. Similarly, the donations will also be made for every free throw made by the men’s basketball team throughout the month.

Johnson said the fundraiser and “giving back to the community means the world to me.

“One of my goals in life is to influence the youth and help out where it is needed,” Johnson stated. “Taking the time out to genuinely spread love and hope to the families in need is amazing.”

Alysha Giarra, director of Operations, Women’s Basketball, at St. Bonaventure, said the fundraiser for Genesis House was influenced by Johnson.

“Asianae’s story is pretty spectacular, she was in and out of shelters with her family for five years,” Giarra explained. Consequently, when the A-10 Conference asked college teams to pick a charitable cause, platform or marginalized community to help, the basketball teams decided to help Genesis House.

“We worked with Genesis House before, and with Asianae’s story it just made sense for us to partner up with a shelter and give back anyway we can,” Giarra commented.

She said Johnson, who is from Brooklyn, received a full basketball scholarship from St. Bonaventure.

“The coach loved everything about her,” Giarra recalled. “She’s into her junior year here now and basketball is definitely her passion and her way of life … and she always had the goal not to make her mom pay for her college.”

Johnson, who is the top scorer on the team and has started in all the team’s games, is an international studies major and wants to continue playing basketball overseas after college.

Seth Johnson, assistant director for marketing, licensing and fan engagement, said the women’s team had conducted Pink Game fundraisers in the past for the local Pink Pumpkin Project, which supports individuals with breast cancer. Due to the pandemic, however, the special game and its fundraising efforts couldn’t be held this year.

He said Paul Brown Motors has been instrumental again this year with the fundraiser, as they have been with their past partnerships for Pink Games.

“Paul Brown deserves the credit for heading this up and being the first to be our sponsor,” he added.

“The success stories for the homeless are few and far between,” Westcott said. “So when we do hear of a success story for someone who was homeless” it is uplifting.

“It’s inspiring to other young people, she continued. “We have had young people at Genesis House who were scared and they didn’t know where to turn or what’s next.”

She said money provided through the fundraisers is critical to the shelter, which provides a number of services to individuals, as the facility is nonprofit and primarily relies on donations.

“We couldn’t make it without the agencies, congregations and people in this community,” she concluded. “That’s what helps us survive.”

The teams and Paul Brown Motors are hopeful of raising as much money as possible for Genesis House, therefore ask the community to contribute to the effort by visiting www.genesishouseofolean.org for more information.