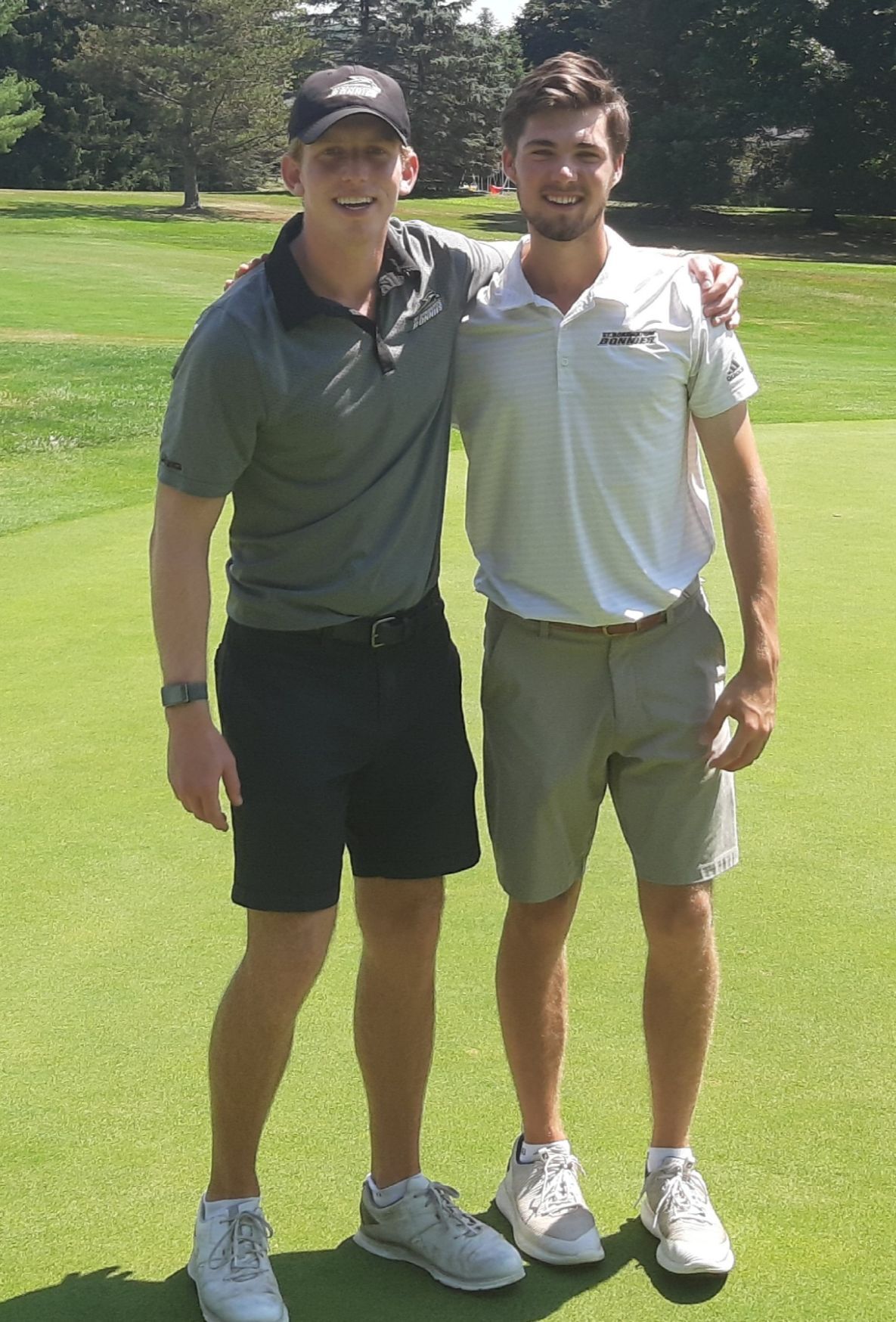 Jack Geise (left) and Dan Gianniny on the 10th green after their SWNY-NYPA Men’s Amateur final on Sunday at Bartlett Country Club. Geise, with 10 birdies in 27 holes, won 10-and-9. 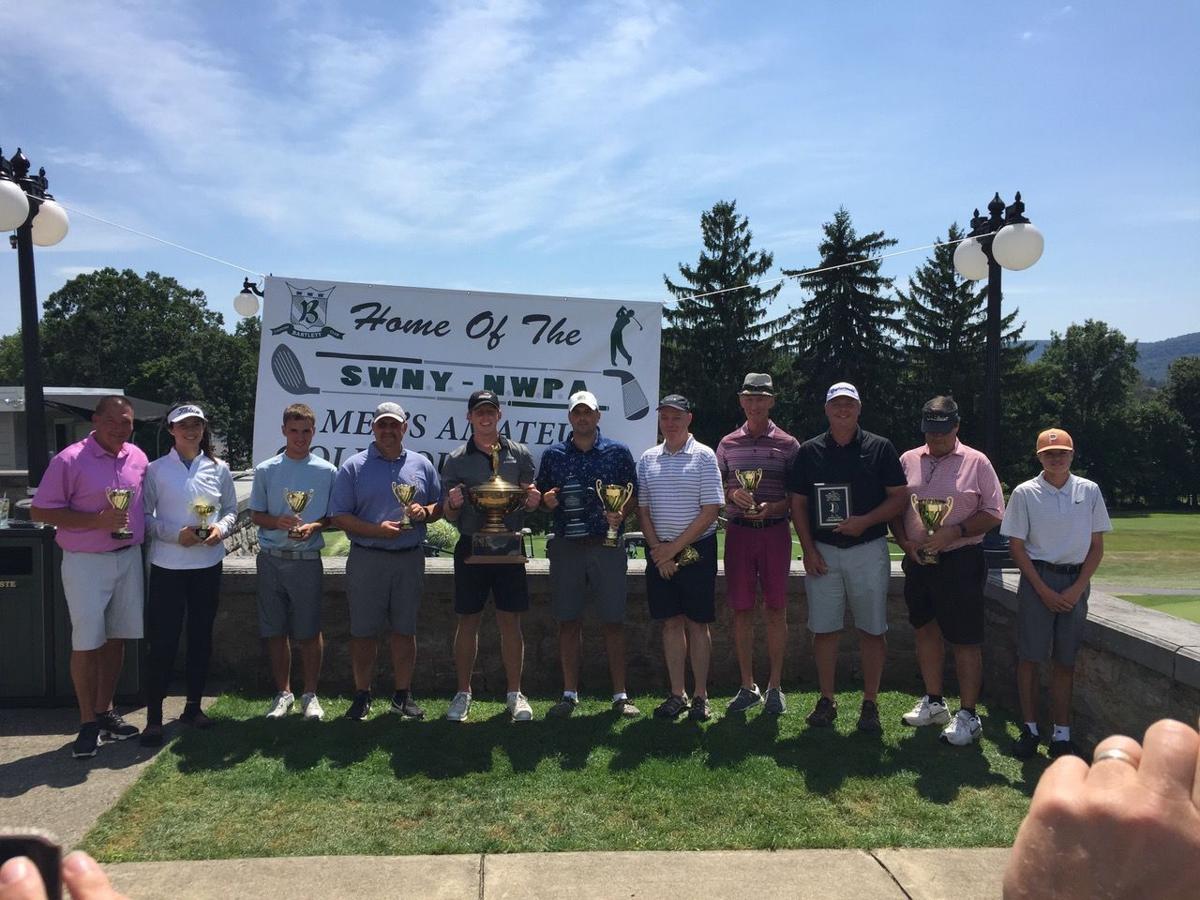 Jack Geise (left) and Dan Gianniny on the 10th green after their SWNY-NYPA Men’s Amateur final on Sunday at Bartlett Country Club. Geise, with 10 birdies in 27 holes, won 10-and-9.

OLEAN — There hasn’t been such a one-sided final in the Southwestern New York-Northwestern Pennsylvania Men’s Amateur Golf Tournament in 50 years.

On the other hand, there’s NEVER been a performance quite like the one Jack Geise put on yesterday at Bartlett Country Club in the tourney’s 84th renewal.

In a matchup of 21-year-old St. Bonaventure golf team seniors, Geise put on an unprecedented show in downing his housemate and best friend, Dan Gianniny, 10-and-9.

Over the initial round, Geise, who has ties to Olean but lives in San Diego, started with two bogeys, then shot a 5-under-par 65 that included eight birdies, two of monster length. He finished the day with 10 birdies over 27 holes and though Gianniny had a very solid 3-over-par day, he never had a chance.

“He played fantastic, I’m happy for him. It’s a weird situation, we’ve been roommates since freshman year and I love to see him succeed. It ended early, but we still had a lot of fun out here.”

He added, “In the first round, I shot 75 and Jack beat me by 10 shots. The second round I was actually playing pretty well, one- or two-under-par, so it wasn’t even that bad. But I’ve seen him improve so much since freshman year, I’m proud of him.”

“IT WAS the best round I’ve ever had here (at Bartlett),” Geise said of St. Bonaventure’s home course. “I had it going well today … felt really good on every part of my game. I was driving the ball really well and only missed a handful of fairways and the flatstick (putter) was really good, I was really confident on the greens.

Of his relationship to Gianniny, Geise added, “He’s my best friend, teammate, housemate. It’s weird playing your best friend ... we’re both competitive and we want to play and push each other and beat one another. But at the end of the day we’re still the best of friends.

“It’s a different aspect when you’re playing against one of your best friends because you want to win but you want them to play well … still it’s enjoyable to play against him.”

HIS VICTORY was the most one-sided since the late Eddie Forrest beat Bill Pedacchio, 11-and-9, in 1971.

Actually, Geise might well have won 11-and-10 as he made a birdie putt on No. 11 but conceded a 6-foot birdie to Gianniny to move the match to the 10th. And that was to be expected between two friends.

“I always say golf is a gentleman’s game so I try to stay level-headed and not show too much of my emotions when I’m kind of getting angry (with my play) and trying to regroup myself,” Gianniny said as he pondered the defeat. “I was coming down the second 18 and, obviously, you’re a little disappointed … but you can’t be too disappointed, he played so well, there’s no beating that. It was a perfect end to the tournament for him.”

Indeed, Geise and Gianniny and their respective caddies, Jude Cummings and Christian Chapman, all had dinner at Dan’s house in Rochester last night.

Geise intends to return to Bona next year to get his masters in business administration as Covid-19 has permitted him another year of eligibility.

Gianniny, who will have the same degree, is uncertain he’ll pursue his MBA but instead may join his family’s real estate business.

What’s certain is that, with no golf season for St. Bonaventure due to coronavirus, the two friends will play in the U.S. Amateur Four-Ball qualifier later this month in Buffalo.

As for Geise’s local ties, he noted, “My dad (Steve) grew up here and went to Portville and my grandparents (Ken and Bev) live in Olean. I also have some aunts and uncles in the area as well, so that was a draw to come (to St. Bonaventure). I enjoy the school, I love the team and it’s nice to have some family in the area.”