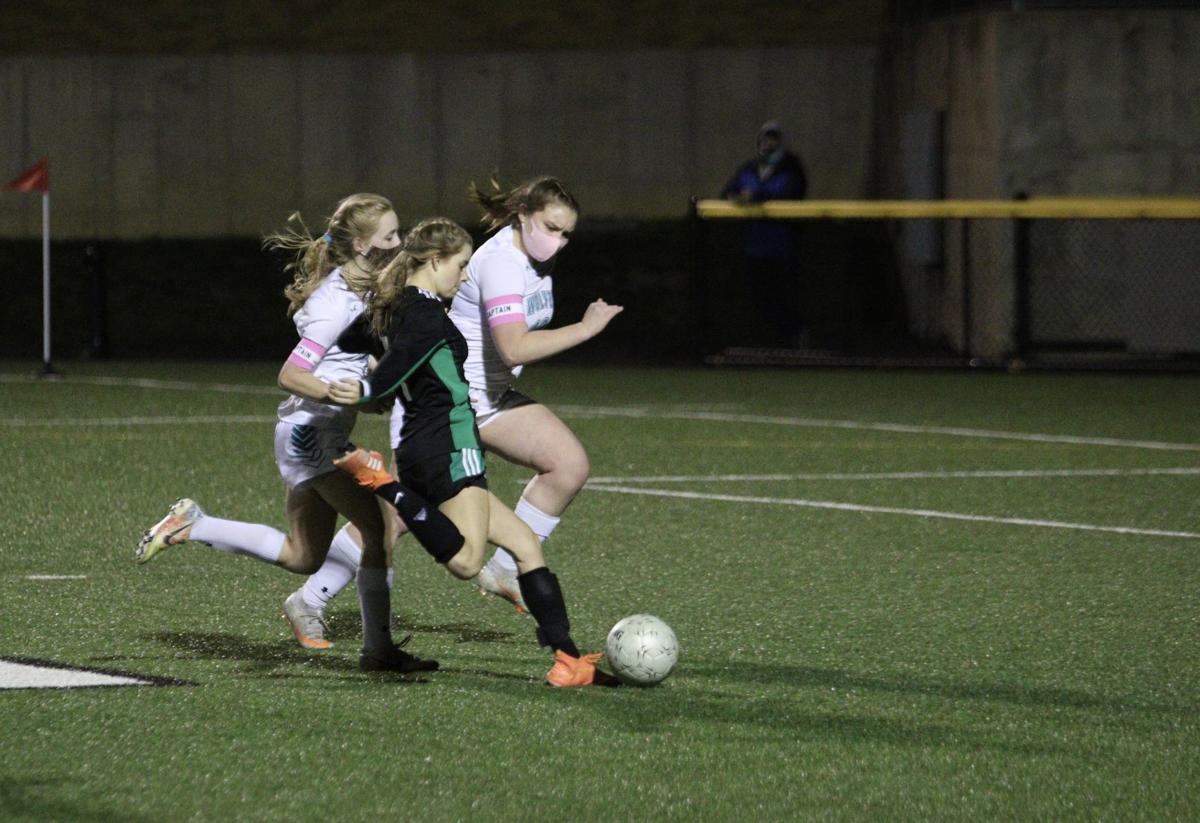 Fillmore’s Sophia Templeton takes a shot that would find the back of the net for a goal in the second overtime against Arkport/Canaseraga in Thursday’s Section 5 Class D1 championship game in Fillmore. 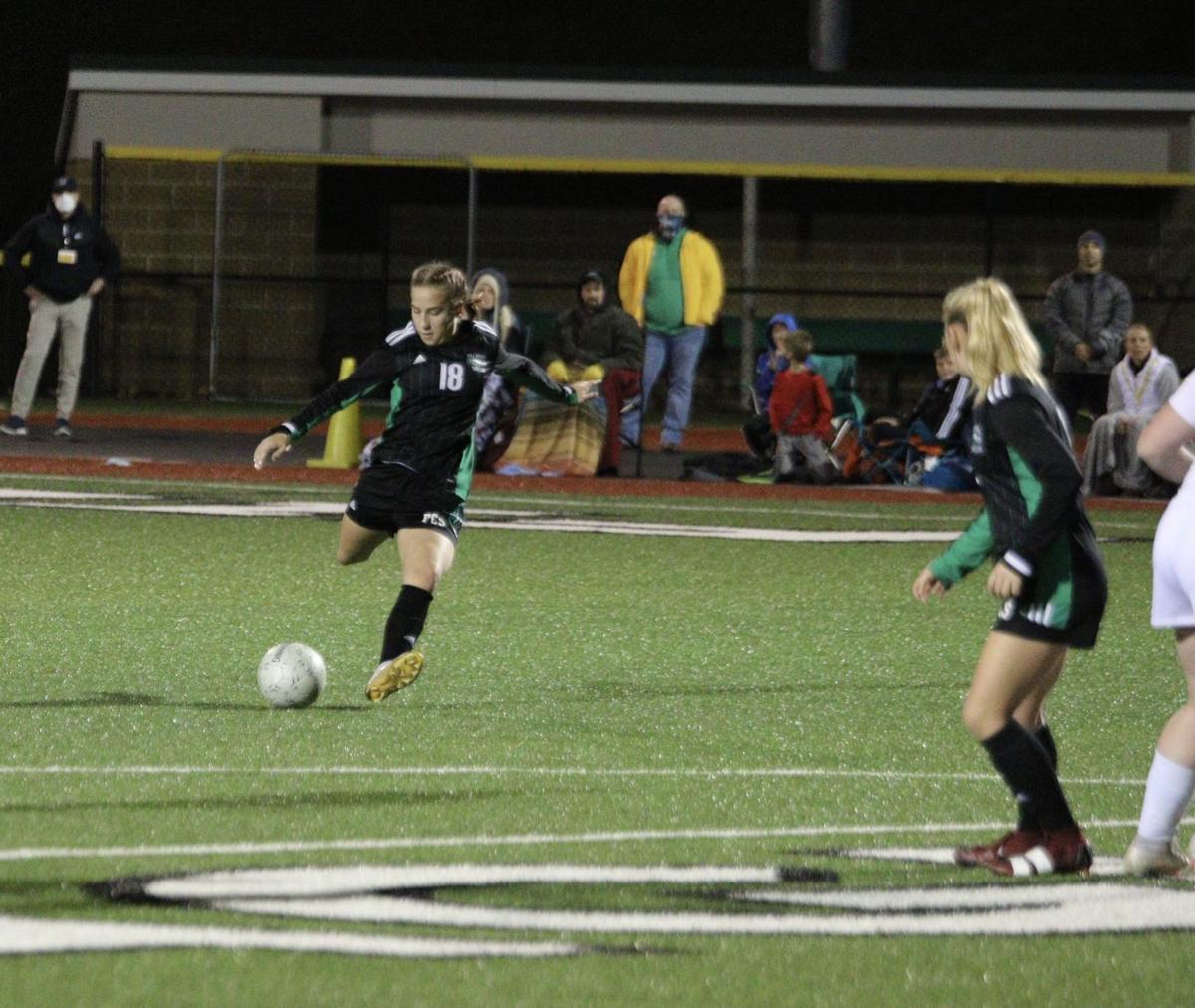 Fillmore’s Sophia Templeton takes a shot that would find the back of the net for a goal in the second overtime against Arkport/Canaseraga in Thursday’s Section 5 Class D1 championship game in Fillmore.

FILLMORE — For 80 minutes, the Fillmore and Arkport/Canaseraga girls soccer teams could not solve each other’s goalkeeper.

Despite a back-and-forth game with strong scoring chances on both ends, the Section 5 Class D1 championship reached overtime tied 0-0 Thursday night. Then, the fireworks began.

With two long-range goals, Arkport/Canaseraga took a 2-0 lead after the first of two mandatory 10-minute overtime periods. Fillmore’s Sophia Templeton cut into the lead less than five minutes into the second OT, with dazzling speed and dribbling after a Grace Russell setup pass. But Arkport/Canaseraga held on from there, winning 2-1 to avoid a sudden-victory overtime or possible tie.

“I think it was one of those games that we didn’t figure out until about eight minutes to go in the game,” admitted Eagles coach Jon Beardsley. “It was a tough team to read tactically from our standpoint and it was also one of those games, I think, physically we just didn’t have the legs for after the marathon that we had the other night and the effort they put in the other night.”

Playing three sectional games in six days, including an exhausting 3-2 overtime victory over Keshequa, combined with senior co-captain Shelby Beardsley being unable to play, made for an emotionally draining week for the Eagles.

“I think we had good energy at the end of the game, so I don’t think it was necessarily (fatigue), it was just (our) mindframe,” Beardsley went on. “We’ve had some situations, we’re missing Shelby, it took an emotional toll.

“I think the first night not having Shelby was more of a momentum, like we’ve got to do something to step up. I think we went from a high to a low about four different times and that takes a lot out of a kid and a lot out of a coach too.”

Maureen Stuckey and Julia Payne scored for Arkport/Canaseraga (11-1). Both made difficult shots, Stuckey from 25 yards out near the right corner and Payne from a direct kick about 35 yards away, that Fillmore goalkeeper Preslee Miller just couldn’t quite reach.

“(That’s) the best game she’s had all year,” Beardsley said of Miller. “The two goals that went in, what are you going to do? There was not much you can do, they were long shots that just got into the back upper corner. I don’t know many keepers that were (going to stop that). She also saved a couple breakaways.”

Emily Fuller made 11 saves for A/C.

Both teams had numerous opportunities to score in regulation, but close misses — from shots off the crossbar or just wide of the net to big saves — kept the game scoreless until the 83rd minute, when Stuckey broke through.

“It was a tough game to figure out and I don’t think (either) team could ever get a flow to what was going on,” Beardsley said. “For the last seven minutes, we finally got a flow, I changed, went to three in the back, three up top and overloaded my midfield a little bit and we started to get a little more.”

“I said it at the beginning of the year and I kept saying it over and over again, we’ve got a youthful group, a pretty talented group and the four seniors that came in were role players and some of them had to be role players again,” Beardsley said. “They could’ve mailed the season in and said we’re not going to allow that to happen and those seniors ... they put their arms out and said we’re going to be special. They allowed that youth to show what they’re capable of doing.”

Fillmore started four freshmen, three seniors, three juniors and one sophomore. With Grace (24 goals) and Hope Russell (19 goals) set to play three more years and Templeton (17 goals) coming back as a senior, the future remains bright for the Eagles.

“I’m a planner, I come into the season and I know what this season’s going to be like and I can probably tell you what it’s going to be like for the next two or three years,” Beardsley said. “We take pride in being a program and my modified coach is sitting with me, I have an assistant that’s been with me three years, my JV coach as been with me for 13 years, they’re involved in the summer stuff, my people up in the box doing the special things that they do, there’s so many little parts that happen that it’s just a continuation every year, you know if we keep doing the things that we’re doing, we should always be having a chance to be part of these things.”

Beardsley marveled at how his team made it through a complete season amid all the complications of playing during the COVID-19 pandemic.

“No kids, whether they’re from Arkport/Canaseraga or these kids here, should have to be put through some of the stuff that’s gone on this year,” Beardsley said. “But at the same point, this is the chance to come and get an outlet. We got 15 games to do that and a lot of people didn’t. Every single time I came out to the kids, I said, ‘It might be over tomorrow.’ Then we got one more and then we got one more and we did every one of them that we could possibly do, we got to. We’re thankful for that.”