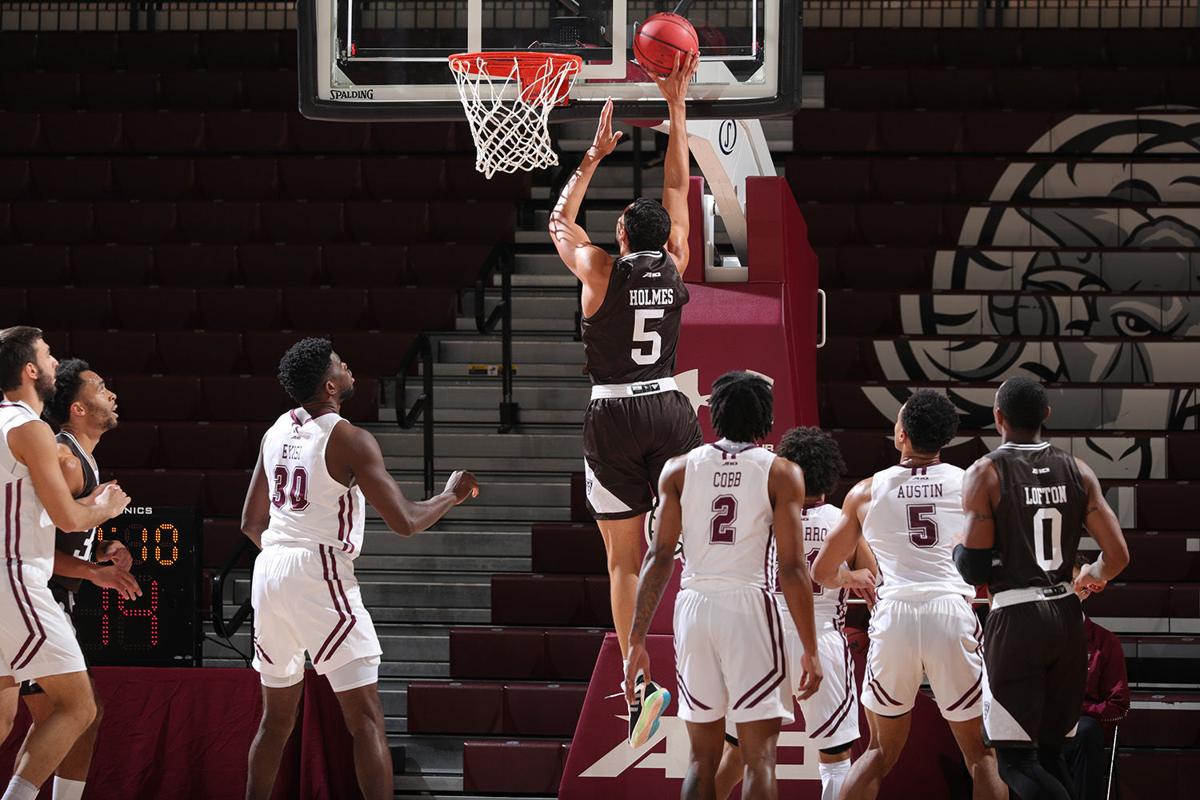 St. Bonaventure’s Jaren Holmes (5) gets past a handful of Fordham defenders for a layup as teammate Kyle Lofton (0) looks on during an Atlantic 10 game on Wednesday at Rose Hill Gym in the Bronx. Bona went on to a 68-54 triumph. 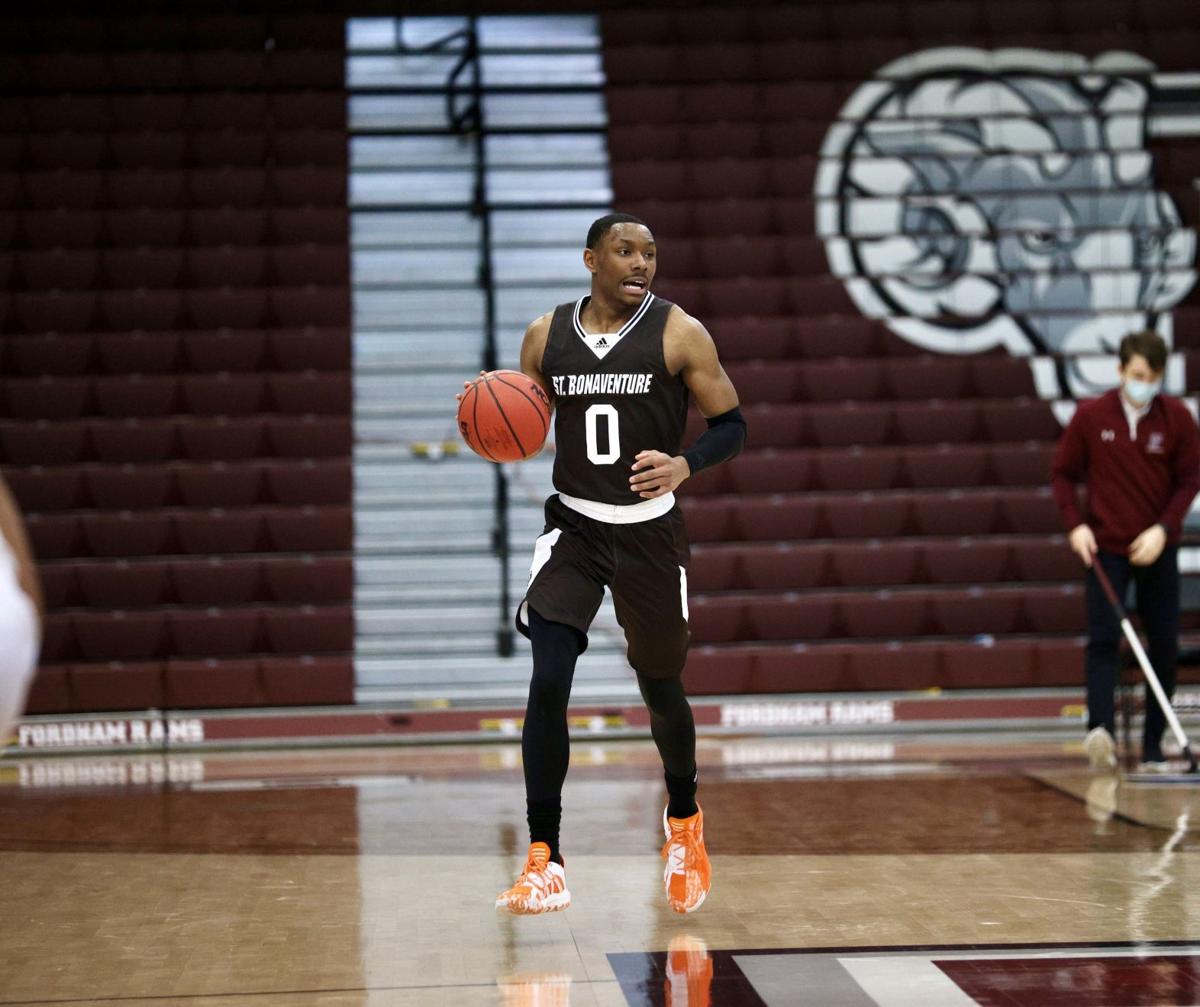 St. Bonaventure’s Kyle Lofton looks up court during a road contest at Fordham Wednesday afternoon. Lofton became the 45th player in program history to reach the 1,000-point milestone in the win.

St. Bonaventure’s Jaren Holmes (5) gets past a handful of Fordham defenders for a layup as teammate Kyle Lofton (0) looks on during an Atlantic 10 game on Wednesday at Rose Hill Gym in the Bronx. Bona went on to a 68-54 triumph.

St. Bonaventure’s Kyle Lofton looks up court during a road contest at Fordham Wednesday afternoon. Lofton became the 45th player in program history to reach the 1,000-point milestone in the win.

It began in rather unexpected fashion.

A Fordham team, which struggles to score, getting uncharacteristically hot from 3-point range. A high-scoring, back-and-forth affair between two of the most defensive-minded teams in the league. A technical foul assessed to an emotionally-charged Kyle Lofton, who sat the final 5:56 of the first half just to cool off.

It ended, however, in much the way the St. Bonaventure men’s basketball team and its fans might have envisioned: with Bona imposing itself against a spirited, but clearly inferior opponent.

Jaren Holmes continued his scoring barrage, pouring in 26 points, and Bona used a strong second-half defensive effort to pull away from Fordham, 68-54, in an Atlantic 10 matchup on Wednesday inside Rose Hill Gym.

For as wary as they were of a Rams group that had just knocked off Dayton and hung with Duquesne, the Bonnies understood there was still a “take care of business” undertone to this one.

“It was a struggle,” Schmidt acknowledged. “They’re a tough team, especially here with the big guy (Joel Soriano) inside. It was a battle. But I thought our guys, especially after halftime, refocused and did a really good job defensively against that team.”

He then put it thusly: “It was like a test for us, you know? It’s like, how are we going to play against a team that almost beat Duquesne and beat Dayton here? It was a challenge. I thought our guys did a really good job, especially in the second half.”

Fordham (1-4) looked like a different team offensively in the first half, connecting on 7-of-18 3-pointers and tallying 37 points while making it a tie game at the break. This from a group that had made just 17 treys beforehand and was averaging only 49.5 points on the year, lowest in Division I.

Bona clamped down in the second half, however, allowing a mere 17 points on 7-for-22 shooting, including no field goals (and just three free throws) over the final 8:50 while doing enough offensively to turn a two-point game (45-43) at the under-16 media timeout into a comfortable victory.

And in the end, it hit its marks while making the feisty, but overmatched Rams look more like the team we’re accustomed to seeing.

“They hit some tough shots; we contested shots in the first half, but they made those shots,” Schmidt assessed. “We did a better job of contesting in the second half — we changed defenses, we played zone, we tried to keep them off balance.

“But the guys, they’re committed. They understand that in order to beat Fordham, you need to defend. They’re one of the best defensive teams in the Atlantic 10. Our guys really dug in.”

AND THEY turned in some superb individual efforts, on both ends, in the process.

Holmes, despite a week in between, picked up where he left off against Saint Joe’s (career-high 38 points), dropping 26 on 10-of-16 shooting, including 17 first in the first frame to help ensure a 37-all game at the break. Lofton finished with 14 points and six assists while eclipsing the 1,000-point mark for his career. The junior guard, who re-entered, more calmly, at the start of the second half, became the 45th player in program history to join that club with a layup against heavy contact early at the 19:36 mark.

Jalen Adaway had another strong outing with 14 points and nine rebounds and Dominick Welch, while struggling offensively, still grabbed 14 rebounds, tying his career high. Ultimately, though, the catalyst was once again Holmes.

The junior guard has tallied 64 points in his last two games and is averaging an impressive 27 over the previous three.

“AND IT’S coming in the offense, it’s not forcing things,” Schmidt said. “He’s hitting open shots. I had no idea he had (17 at halftime) by the way he plays. He kept us in the game from an offensive standpoint in the first half. He’s really, really important to our team. You saw when we didn’t have him against Rhode Island how we struggled.

On an average offensive night against a pesky foe, just as notable were the other components. Bona followed its usual blueprint to a win: it moved the ball offensively, committed just 10 turnovers, defended and dominated the boards, outrebounding the Rams 43-24. And unlike the Flyers and Dukes, they wound up leaving little doubt.

Adaway and Welch — and Osun Osunniyi, who chipped in a career-high seven assists with seven boards — were at the forefront of the latter two categories.

“You look at Kyle (against Saint Joe’s), he didn’t score a basket, but he has 11 assists,” Schmidt pointed out. “Our guys, they’re mature now, they understand how to win. They’re not going to be the star of the team offensively every night. They understand the importance of winning games and how to win them. When your offense isn’t going well, you gotta do something else, and they’ve done that.”