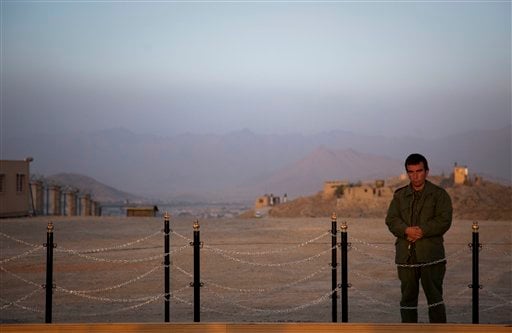 An Afghan man mourns at the grave of assassinated former Afghan President Burhanuddin Rabbani in Kabul, on Oct 3. An Afghan government commission investigating the death of the country's former president has accused Pakistan of not cooperating with its investigation, after alleging that Pakistani intelligence officials also had advance knowledge of the plot. 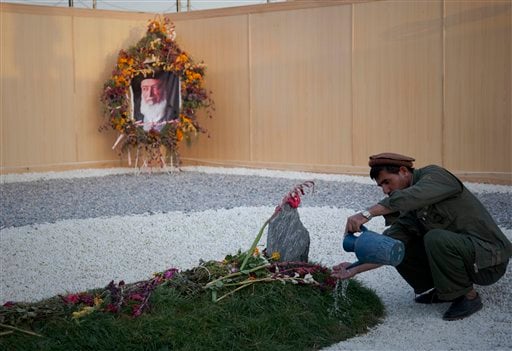 An Afghan man waters the flowers on the grave of assassinated former Afghan President Burhanuddin Rabbani in Kabul, on Oct 3.

An Afghan man mourns at the grave of assassinated former Afghan President Burhanuddin Rabbani in Kabul, on Oct 3. An Afghan government commission investigating the death of the country's former president has accused Pakistan of not cooperating with its investigation, after alleging that Pakistani intelligence officials also had advance knowledge of the plot.

An Afghan man waters the flowers on the grave of assassinated former Afghan President Burhanuddin Rabbani in Kabul, on Oct 3.

KABUL, Afghanistan (AP) — Afghan intelligence officials said Wednesday that they had broken up a cell that plotted to kill President Hamid Karzai, arresting six people in Kabul whom they claimed were affiliated with al-Qaida and the Haqqani militant group.

Intelligence service spokesman Latifullah Mashal said that that the cell included one of Karzai's bodyguards, as well as a professor at Kabul university and three college students.

Mashal described the cell as the "most sophisticated and educated group in Kabul", and said that it had assisted Pakistani militants sent to the Afghan capital to carry out terror attacks. He did not say when they were arrested.

He said the group, which also allegedly planned attacks in Kabul, the United States and Europe, was recruited by an Egyptian and a Bangladeshi based in Pakistan.

Afghan officials have been increasingly vocal in publicly accusing Pakistan and its ISI intelligence agency of maintaining ties with militants, including the Haqqani group. On Tuesday, they claimed that Pakistani officials had advance knowledge of the Sept. 20 assassination of former Afghan President Burhanuddin Rabbani.

Pakistan has denied the charges, but the accusations have further strained relations between the two nations that share a 1,500-mile (2,430-kilometer) border.

The Haqqani militant group, a lethal threat to U.S.-led coalition forces, has been blamed by U.S. intelligence officials and others for a number of high-profile attacks in Kabul in recent years, including hotel bombings and the September 12 assault on the American Embassy.

Mashal identified the two recruiters as an Egyptian named Sayifullah and a man from Bangladesh named Abdullah, who were based in Miram Shah, the capital of Pakistan's North Waziristan region, where the Haqqani group and other militants operate with relative freedom.

Mashal said that the six Afghans were recruited "to carry out suicide attacks in Kabul, plan and coordinate bigger international attacks in the U.S. and parts of Europe and a luxury hotel in Kabul."

"They also were responsible for recruiting one of the key security guards of President Karzai's protective services. They had a plan to assassinate President Karzai maybe during his travels or trips to the provinces," the Afghan intelligence spokesman said.

He did not disclose details about attacks the cell reportedly planned in the United States or Europe.

—Mubullah Ahmadi, who is from Karzai's hometown of Karz in southern Afghanistan. Ahmadi worked as a guard at the presidential palace.

—Parwez, identified by only one name, who was studying at a private university in Kabul.

—Abdul Bashir, a man from Kapisa province in eastern Afghanistan, who was living in Kabul.

The group had access to $150,000 in a bank account in Kabul, he said, as well as access to computers and high-tech equipment. With its university ties, the cell was also well positioned to win more recruits, he said.

"The main purpose of the group was to kill high-ranking Afghan figures and identify guest houses used by foreigners or other potential targets in Kabul," he said.

Karzai has escaped at least four attempts on his life since he took power in Afghanistan after the fall of the Taliban regime in 2001.

In April 2008, militants opened fire with automatic weapons and rockets on a ceremony in Kabul. Karzai, Cabinet ministers and ambassadors scrambled for cover and escape unharmed. Three people were killed, including a lawmaker.

In June 2007, Taliban militants fired six rockets that landed near a school yard where Karzai was meeting with local leaders and residents in Ghazni province. No one was hurt.

In September 2004, militants fired rockets at an American helicopter taking Karzai to the eastern city of Gardez in Paktia province. The rockets missed the chopper as it approached a landing zone.

In September 2002, a former Taliban fighter dressed in an Afghan army uniform fired at Karzai as he traveled in a motorcade in Kandahar in southern Afghanistan. Karzai was not hurt, but the governor of Kandahar province was wounded. The attacker was killed by Karzai's bodyguards.

Separately, the U.S.-led coalition in Afghanistan said Wednesday that a senior leader of the Haqqani network had been killed in an airstrike in the eastern part of the country.

The coalition said the militant leader, identified only as Dilawar, was killed on Tuesday in the Musa Khel district of Khost province.

Afghan and NATO forces have conducted more than 530 operations this year to try to disrupt the Haqqani network, which has ties to both the Taliban and al-Qaida.

So far this year, more than 20 Haqqani leaders have been killed and more than 1,400 suspected Haqqani insurgents have been captured, the coalition said.