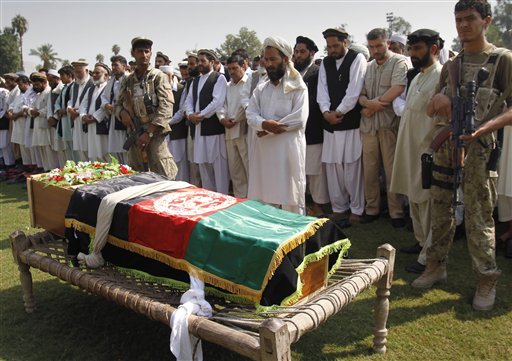 Afghans offer prayers Wednesday over the casket covered with Afghanistan's flag, containing the body of Asel Ahmad Khogyani, government head of Sherzad's district, who was killed in a bomb explosion on Tuesday in Sherzad. 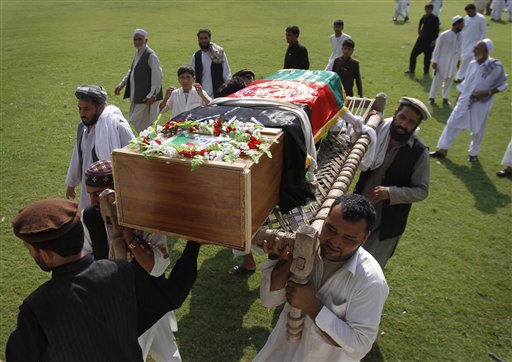 Afghans carry a casket containing the body of Asel Ahmad Khogyani, government head of Sherzad's district who was killed in a bomb explosion on Tuesday in Sherzad.

Afghans offer prayers Wednesday over the casket covered with Afghanistan's flag, containing the body of Asel Ahmad Khogyani, government head of Sherzad's district, who was killed in a bomb explosion on Tuesday in Sherzad.

Afghans carry a casket containing the body of Asel Ahmad Khogyani, government head of Sherzad's district who was killed in a bomb explosion on Tuesday in Sherzad.

KABUL, Afghanistan (AP) — Gunmen killed eight policemen at checkpoint in southern Afghanistan on Wednesday, while the United Nations said the average number of armed clashes, roadside bombings and other violence in the country each month is running 39 percent higher in 2011 compared to last year.

The U.S. and other nations have started to withdraw some troops from the nearly decade-long Afghan war, saying they have made progress in taming the Taliban insurgency by routing their strongholds in the south. But the Taliban has hit back with several high-profile attacks in the capital and assassinations of government officials and key senior figures that has raised questions about how solid a grip the Afghan government and its Western allies have on security — and whether the Afghan forces can ever secure the nation by themselves.

In its quarterly report on Afghanistan released Wednesday, the U.N. said that as of the end of August, the average monthly number of incidents stood at 2,108, up 39 percent over the same period a year earlier.

The report also said that while the number of suicide attacks remained steady, insurgents were conducting more complex suicide operations involving multiple bombers and gunmen. It said that on average, three complex attacks have been carried out each month this year — a 50 percent increase compared with the same period last year.

The ambush on the police checkpoint took place near Lashkar Gah, the capital of Helmand province. The city is one of seven areas of Afghanistan where Afghan security forces have started taking over from U.S.-led coalition forces.

Mullahkhail said a policeman who was manning the checkpoint has gone missing. Authorities are investigating whether he might have been involved in the attack.

A day earlier in Lashkar Gah, a suicide bomber rammed an explosives-packed vehicle into a police truck, killing two civilians. The Taliban claimed responsibility for that attack.

Lashkar Gah was one of five provincial capitals chosen for the first-round transition of security from NATO to Afghan hands this summer. The process also included two provinces.

NATO hopes to use the security zone around the city and the central Helmand River Valley as a foothold to push Afghan governance into outlying areas as coalition forces plan to withdraw combat forces from the country by the end of 2014.

Also in Helmand province, Afghan and U.S.-led coalition troops destroyed drugs worth more than $350 million and three drug laboratories in what is believed to be Afghanistan's largest drug seizure this past decade, NATO said Wednesday.

The money from the drugs was believed to be bankrolling attacks on Afghan and coalition forces.

Acting on intelligence, the troops targeted an area in Helmand's Baghran district on Monday that was suspected of being a manufacturing site for drugs and destroyed more than 26,000 pounds (12,065 kilograms) of chemicals used to make drugs, 220 pounds (100 kilograms) of heroin and 176 pounds (80 kilograms) of opium. Afghanistan produces about 90 percent of the world's opium.

Separately, a New Zealand special forces soldier was shot in the head and killed during a gunbattle with suspected insurgents in a compound near Afghanistan's capital.

Lt. Gen. Rhys Jones, the chief of New Zealand's defense force, said the soldier was part of a team of 15 supporting about 50 Afghan police trying to serve arrest and search warrants to a group suspected of planning an attack in Kabul.

Jones said a man and a child in the compound were wounded during the battle, which continued for hours.