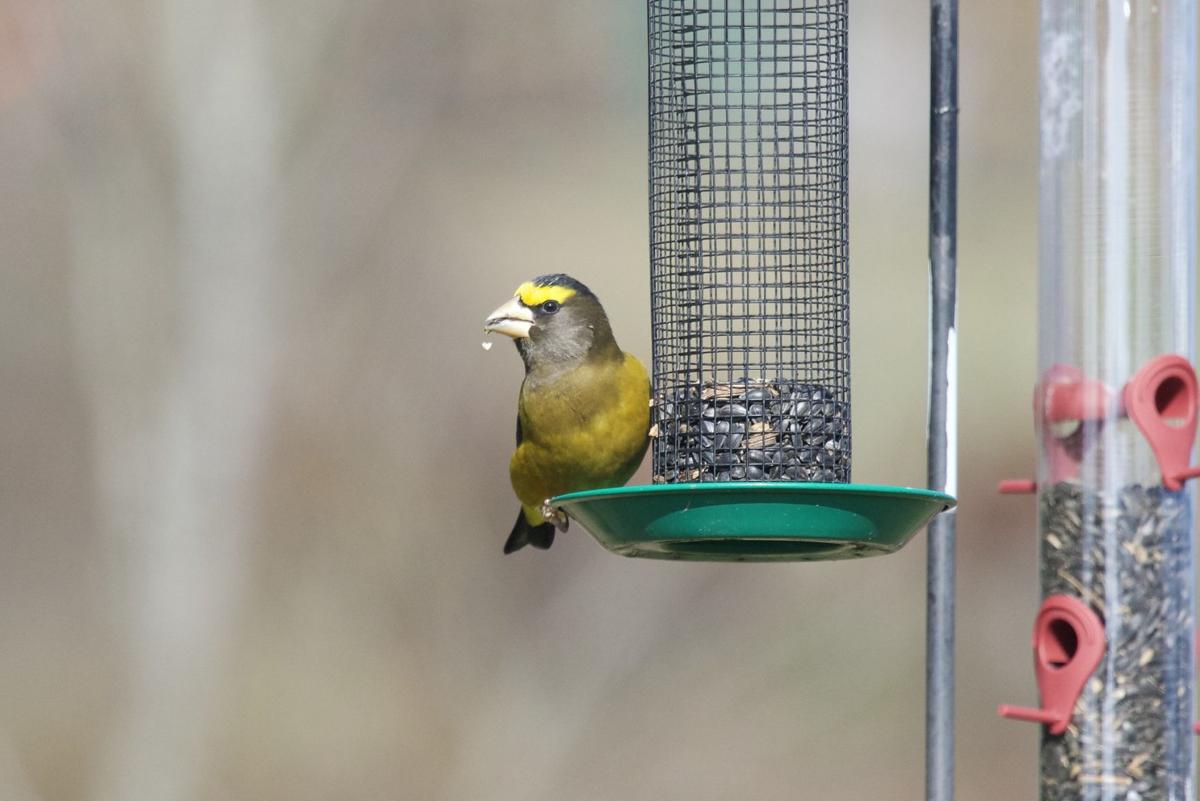 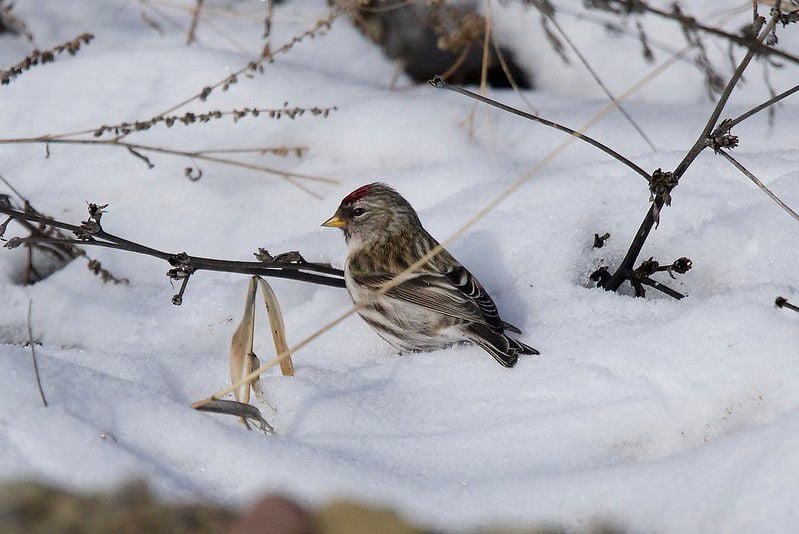 Here today and gone tomorrow — and that’s if you’re lucky. I’m referring to winter birds generally, and winter finches specifically. Unlike spring and summer birds, which stake out territory and defend it against other birds for weeks or months, winter birds are much more transitory. It’s true that some people have reported large flocks of evening grosbeaks returning to their feeders day after day, but that seems to be the enviable exception to the rule. I say “enviable,” but a flock of evening grosbeaks can go through a lot of expensive bird seed very quickly, so maybe it’s not so enviable.

More typical of winter finches is the situation in which they fly in, eat and fly out. I had that experience on Trowbridge Road recently when I was returning home from Case Lake in Franklinville. Just as I got to the top of Trowbridge, a large flock of small birds exploded off the side of the road.

I sat in my car and watched the flock, which I estimated at about 100 birds, move from one patch of goldenrod to the next picking seeds off the plants. I had my camera with me and tried to get a few shots but the flock was very active and moved like a rolling wave. Fortunately, Trowbridge is not heavily traveled at that time of day, but the road had recently been graveled so driving along quietly was like trying to walk quietly on a squeaky wooden floor.

I took 30 or 40 shots of the birds and when I got home I realized that I had one or two shots that I would call “keepers.” Those are the shots that not only capture the bird but also capture something of the bird’s personality, if that’s possible.

Convinced that I could get a higher percentage of keepers after the sun had dropped a little lower in the sky, I drove back to Trowbridge an hour later, but it was as if the birds had never existed. Just like that, a large flock of common redpolls simply vanished. I drove around a little looking for them but they were nowhere to be seen. In that case, here today but gone tomorrow was too optimistic.

I was on Trowbridge more or less by accident because I had been at Case Lake in Franklinville, which is a short 20-minute drive from my house. If you’ve never been there it’s a nicely maintained park that overlooks Case Lake, which, like many lakes in our area, was created by damming a creek.

I don’t know how deep it is but I counted close to 100 common mergansers when I was there, and since mergansers are diving ducks that go completely underwater searching for fish it must be fairly deep. Hopefully, it won’t freeze too early because when it does, what’s there today will be gone tomorrow.

It also attracts gulls and since we don’t see gulls in our area much, it provides a nice opportunity to study the differences between ring-billed and herring gulls, both of which look very similar when they become adults, so it can be challenging trying to identify them on the wing.

But what really makes Case Lake interesting at this time of the year is the presence of bald eagles, which are probably following the migration of the mergansers. The last time I was there I counted five bald eagles, including two adults and three juveniles, and even though bald eagles have made a strong recovery in our area, I never get tired of watching them.

And watching bald eagles on the hunt can be a thing of real beauty. When I was there I watched as two adult bald eagles left their perch at the northwestern end of the lake and soared to an incredible height before one of them peeled off on a diving tail chase of a herring gull.

I didn’t see what, if anything, the gull had done to annoy the much larger eagle, but I’m guessing it was something about his mother, because it was high drama as the eagle pursued the gull the full length of the lake. The smaller and more agile gull got away but it was an encounter he probably won’t forget. Interestingly, the gull was an adult so it wasn’t an act of youthful indiscretion.

But, the great thing is, most of the lake is visible from the parking lot so it’s possible to view all of this through the windshield of your vehicle, which can be helpful because it’s a wide-open area and can be quite cold if there’s a northwest wind. Binoculars help but they’re not essential.

In addition to the eagles, mergansers, geese and gulls, there was also a northern shrike at Case Lake two weekends in a row. Shrikes represent a kind of evolutionary middle ground between a songbird and a hawk. On the one hand, they look and sound like a songbird and can be mistaken for a northern mockingbird or even a blue jay. On the other hand, they have a hooked bill like a hawk, which they use to break the neck of their prey since they don’t have the strong talons that hawks use to squeeze the life out of their prey.

If there’s a shrike in the area, they’re easy to see because they’re almost always on a high perch and, for obvious reasons, they’re always alone. But they’re skittish so they can be difficult to get close to.

For now, area lakes and ponds are generally ice free but there’s no telling how much longer that will be so it’s better to get out there today because the birds may be gone by tomorrow.

Images of some of the birds mentioned here can be seen at: https://www.flickr.com/photos/meadowsteward/.