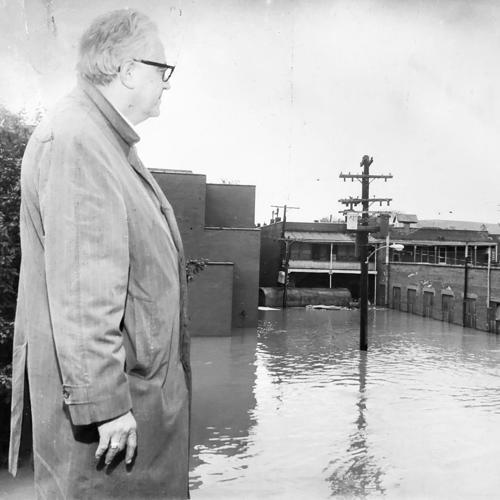 A man surveys the flooded lot east of Main Street in Salamanca from what is today the parking lot of the Holy Cross Athletic Club on Clinton Street. 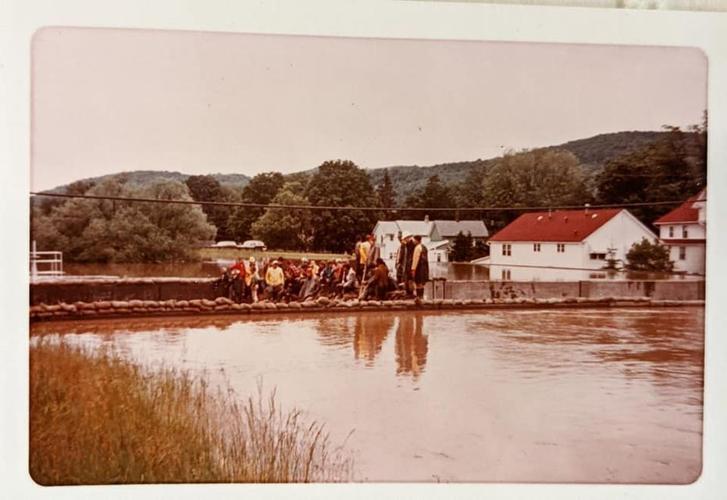 A crew sandbags the Main Street bridge in Portville in June 1972 to help prevent flooding the village. 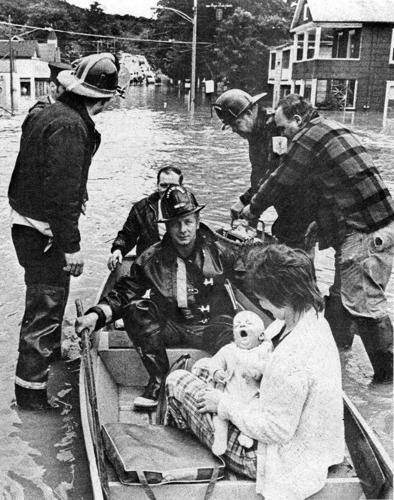 A woman and baby are rescued from floodwaters on South Union Street in Olean from the Flood of 1972 from Hurricane Agnes. 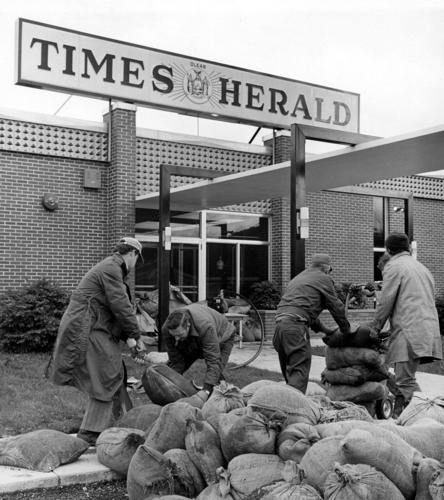 Olean Times Herald employees sandbag the entrance to the newspaper on Norton Drive during the Flood of 1972 from Hurricane Agnes.

A man surveys the flooded lot east of Main Street in Salamanca from what is today the parking lot of the Holy Cross Athletic Club on Clinton Street.

A crew sandbags the Main Street bridge in Portville in June 1972 to help prevent flooding the village.

A woman and baby are rescued from floodwaters on South Union Street in Olean from the Flood of 1972 from Hurricane Agnes.

Olean Times Herald employees sandbag the entrance to the newspaper on Norton Drive during the Flood of 1972 from Hurricane Agnes.

7 a.m. — 2.41 inches of unrelated late spring rain are reported overnight in Olean, saturating the ground throughout the region.

8 a.m. — Showers connected to the hurricane’s remnants are reportedly coming to the Olean area in the evening, but no call for alarm is made.

7 p.m. — The storm strengthened over land — something relatively uncommon in hurricanes — and quickly moved north.

8 p.m. — Heavy rains begin to fall in the area. The National Weather Service blamed it on a combination of Agnes remnants and an approaching low pressure system moving in from the west.

Evening hours — Roads, schools and industries are closed throughout the region; bridges and electrical lines have been knocked out; and evacuations were forced for 80 residents of the Wellsville Nursing Home. Wellsville’s South Main Street is under several feet of water in the morning, and residents are warned to shut off basement pilot lights and conserve drinking water.

11:30 p.m. — Waters begin to rise at an alarming rate throughout the Eldred business district.

7 a.m. — The Allegheny River is 2 feet from overflowing at Portville and still rising. The bridge to East River Road is covered but not washed out. Routes 305 and 17 are closed.

8:45 a.m. — The Olean Civil Defense headquarters received an all-points radio warning that the water levels of the Allegheny River are rapidly rising as up to six inches of rainfall to the south and east, leading to mass mobilization of emergency responders. Other communities do not receive the message.

10 a.m. — The trestle of the former Shawmut Railroad across Olean Creek is under water, with the rail cars holding it in place appearing to float on the water. Bradner Stadium and War Vets Park fill with water — oddly, only the city pool is visible above the water level.

11 a.m. — Boil water advisories are reported in Allegany and Limestone.

5 p.m. — With the Allegheny River within 2 feet of its crest in Portville, the First Street bridge has been closed. Overturned cars are reported on Route 305, and Route 17 is closed.

8 a.m. — High waters have swamped the spillway at Cuba Lake, sending more water down Oil Creek to Olean Creek and into the Allegheny River.

9 a.m. — The waters of Kings Brook overwhelm the dike at the sandbagged Shawmut trestle — the first report of such overflows during the storm. Olean deploys 20 firefighters in boats to assist in evacuations in low-lying areas. South Olean is the first area to report high water, swamping Swartz Food Store and other businesses in the area.

10 a.m. — Portville records the Allegheny River at 20.5 feet, the highest mark on record. “Another foot will give us trouble,” said Acting Mayor Kenneth Eldridge. The shelter at Portville High School opens, eventually taking in 900 displaced residents.

10 a.m. — Salamanca reports the river is 2 feet above the former flood level, but the new steel and concrete dikes constructed last year are holding. Lowland areas without levees are under water, and the Water and Light Department are working “overtime” at the Water Street pump station to clear the storm sewers clogged by the high river level.

10 a.m. — The National Weather Service reports that the ground is fully saturated from previous rain, comparing it to a “sponge that won’t hold any more” and that any further rain will likely run off directly into storm sewers, streams and rivers.

Bolivar-Richburg graduates 51 in Class of 2022

Even When Stroke Centers Are Near, Black Americans Often Lack Access

11 a.m. — Residents are urged to not telephone municipal agencies for information, as high call volumes are delaying necessary communications.

Noon — A banner Times Herald headline report “Olean Is Facing ‘Greatest Flood.’” The Allegheny River level at Olean has risen three feet in two hours, and a crest of 21 feet is predicted — assuming no more rain. The flood is the first real test of the city’s diking system, built in 1952 after the Flood of ‘42.

Noon — Main Street in Bolivar becomes a small creek, with water running along its course and breaking a water main — disabling the village’s water system.

Noon — The last print edition of the Times Herald rolls off the press before evacuations are ordered.

12:30 p.m. — 14 evacuation centers are established to house the dislocated in Olean, including more than 800 at Olean High School.

3 p.m. — Floodwaters crest at Eldred, with 12 to 15 feet of water downtown. Some homes are completely submerged, while others only have the second floors or rooflines visible above the deluge.

8 p.m. — A curfew is implemented in Wellsville.

9 p.m. — The Genesee River comes within 10 feet of the 1968 wing of Jones Memorial Hospital in Wellsville, but no water damage is reported.

2:30 a.m. — The year-old, $3 million dike system built to contain floods on par with that in 1942 is unable to contain the Allegheny River at Salamanca. What starts as a trickle quickly becomes a torrent over the dikes, as over 100 residents stand in silent vigil as the waters quickly flood the city. Even though the downtown is swamped, the dikes did serve an important function — they bought time for safe, orderly evacuations, and that time ensured no injuries or deaths were reported in the city during the flood.

6:50 a.m. — The new west wing of Jones Memorial Hospital in Wellsville collapses into the adjacent Genesee River. The second stage of the Route 19 arterial project — the southern portion was already complete by June 1972 — would have put another 75 feet between the hospital and the river and may have saved the wing, Mayor Robert Gardner said.

9 a.m. — The decision is made to abandon the southern end of Portville.

10 a.m. — Over 100 people work quickly to build an eight-foot sandbag dike across the Main Street bridge over Dodge Creek, and additional sandbags are set up at the confluence of Dodge Creek and the Allegheny River to hold back the floodwaters from ripping through the business district.

1:30 p.m. — The Allegheny River crests at the Olean wastewater treatment plant at 24.2 feet and holds steady. The sun begins to shine and only light mists are recorded through the day.

3 p.m. — Mayor Smith surveys Olean Creek and the river by helicopter, and upon landing immediately ordered the sandbagging of the Front Street cement dyke. “It looked then that if you mowed the grass along the dike, the creek would overflow for sure,” he says.

5 p.m. — The Times Herald evacuates $250,000 in computerized typesetters and other equipment purchased when the site opened three years ago and sends it to higher ground. Entryways to the building are sandbagged, and a pump crew led by editor and vice president Grey Fitzpatrick remain behind to keep the building free of water and protect the million-dollar presses. However, the adjacent flood control levee does its job and keeps the waters — inches from rushing over — out of the office.

7:30 p.m. — The Allegheny River at Olean begins to recede from its crest.

11 p.m. — After rumors the Caneadea Dam at Rushford Lake had cracked and was in imminent danger of unleashing a new horror of torrents on the nearby Genesee River valley, authorities report the dam is OK.

9 a.m. — Despite half of it being in the river, Jones Memorial Hospital sees its power restored, greatly easing its continued operations. An emergency hospital site at Washington Elementary School was prepared but not necessary due to the efforts of hospital staff and administrators to keep it open.

12:30 p.m. — The evacuation order in Olean is lifted except for those in a “restricted” area which saw between 75 to 100 homes heavily damaged or destroyed.

1 p.m. — With roads cleared, the New York State Police at Portville school begin letting stranded out-of-state travelers continue their journeys. Happiest of all are a couple from Arizona, who spent four days in the school gym .

Sunrise — Area trucks begin hauling a total of 1,200 tons of flood-damaged material to a temporary landfill on the Struble farm in the town of Olean. The $5 million inventory of Weston’s Mills Shoppers City, dead cows, whole truckloads of bottled beer, and every other kind of waste imaginable is brought to the site.

Noon — The Times Herald publishes its first issue after missing two — the publication’s first and only interruption in 112 years.

Afternoon — After severe damage from the storm, the Erie Lackawanna Railroad declares bankruptcy. The firm would never recover.

9 a.m. — Salamanca Mayor Keith Reed reports that motors for the city’s water pumps have been brought back from Buffalo, and limitations on tap water usage have been lifted.

7 p.m. — After moving back up the hill and indoors, the graduates of Olean High School cross the stage during commencement exercises.