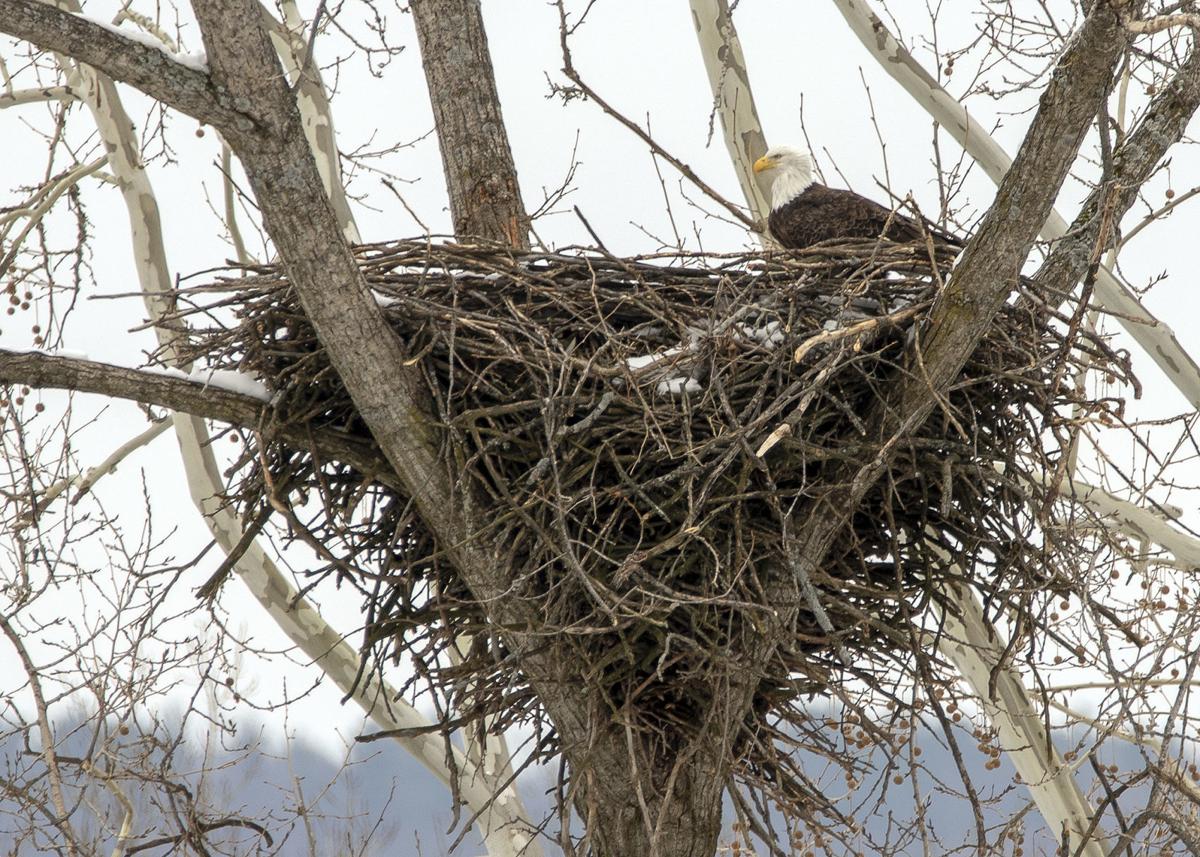 This Belvidere-area nest is an estimated 9 feet across. 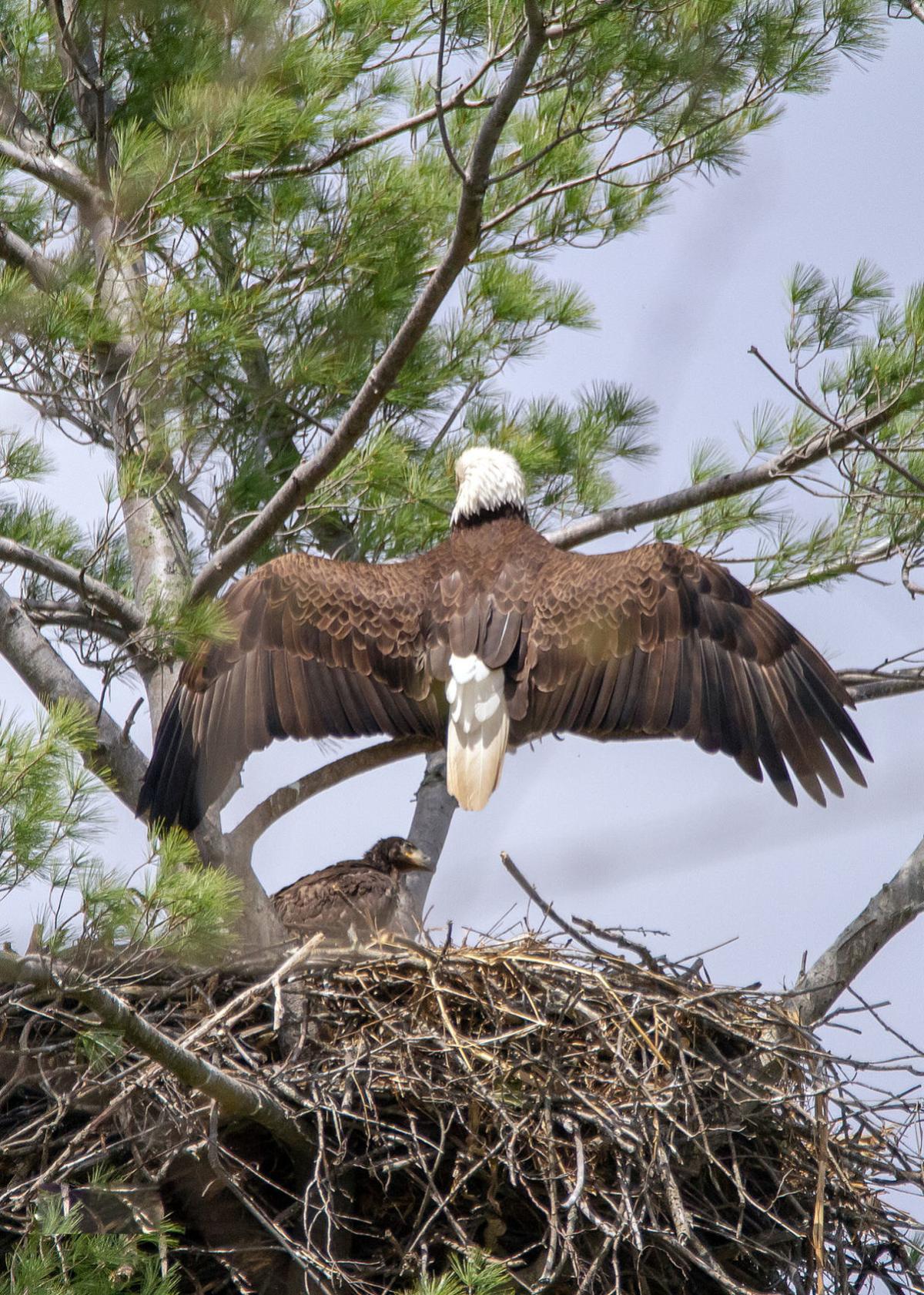 An eagle parent spreads its wings to shade eaglets in this photo taken in Ceres, Pa. 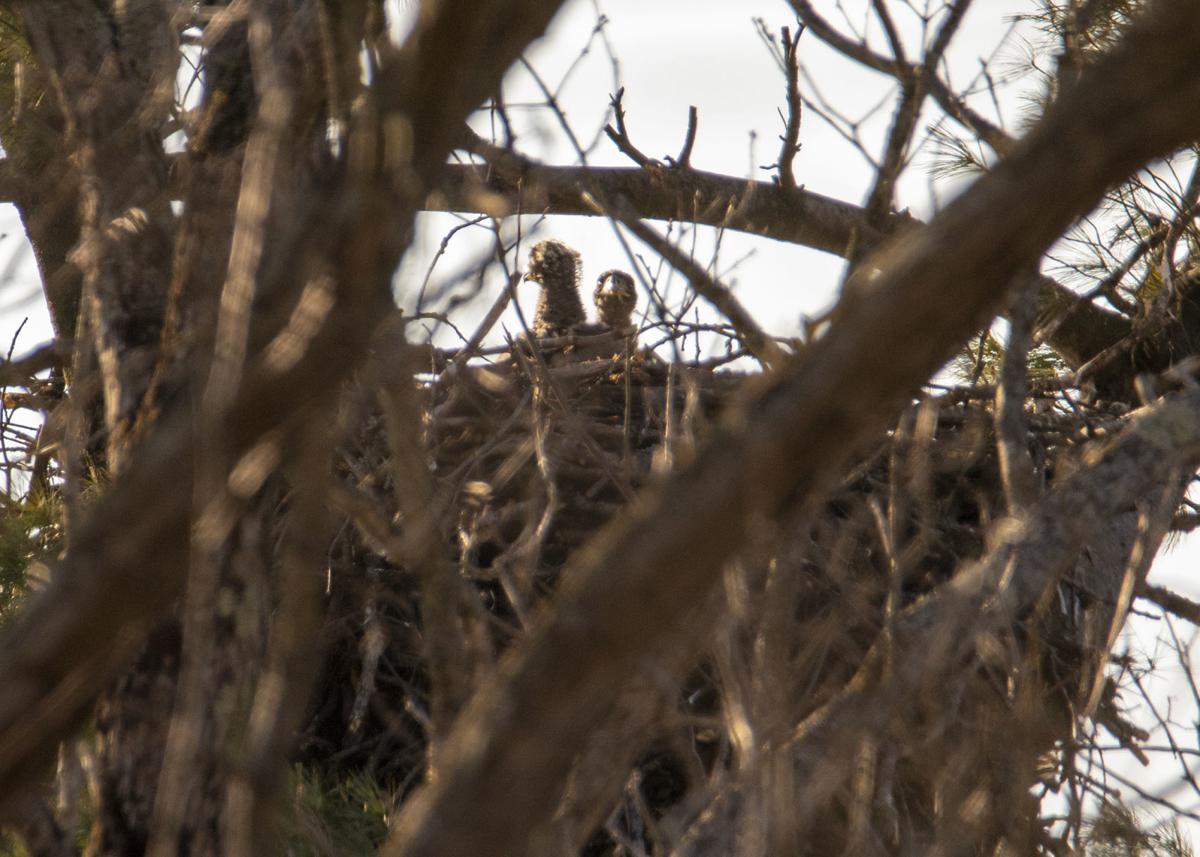 Eaglets can be seen in this Vandalia nest.

This Belvidere-area nest is an estimated 9 feet across.

An eagle parent spreads its wings to shade eaglets in this photo taken in Ceres, Pa.

Eaglets can be seen in this Vandalia nest.

Editor’s Note: Local professional photographer and American bald eagle enthusiast Dan Jordan shares his photographs of and experiences with eagles in Western New York and northwest Pennsylvania, as well as other locations in the U.S.

In this second installment of my series on our national bird, I focus on mating habits, nests and young eagles — or eaglets.

This is especially timely since at this time of year, all the active nests have eaglets being cared for by the adult eagles. There are a number of nests locally, where you may catch a glimpse of the young eagles on the nest. Bring a pair of binoculars, because by U.S. Fish and Wildlife Service guidelines, during nesting season, you must be a minimum of 330 feet (110 yards) from a nest.

If the nest is in an open area where noise exposure and visibility are more of an issue for the eagles, the guidance is 660 feet. Laws allow for large fines or imprisonment for up to one year for the first offense. The second violation is considered to be a felony.

That said, with a long lens on a professional camera or a pair of binoculars, viewing of eaglets on the nest is possible. The best spot I know of to do this is in Belvidere. Just north of I-86 on Route 19 is the largest eagle nest that I’ve ever seen. There is a parking spot about 660 feet from the nest (a legal distance because this nest is in an open area).

I estimate this nest to be 9-10 feet across and 6-8 feet in depth. Eagle nests are added to yearly and can reach weights of over a ton. The record eagle nest weighed 3 tons.

Bald eagles are a protected species and interfering with them in any way can lead to big fines. This includes feeding them, which might surprise some people. It is illegal to possess an eagle, dead or alive, and it is also illegal to possess any part of an eagle, including a feather. In a later installment, I’ll discuss what happens to a dead eagle when the state Department of Environmental Conservation (or other states’ fish and wildlife management organizations) take possession of a carcass.

Interfering with eagles during nesting season is especially frowned upon because a healthy population of eagles is dependent on fertile eggs and development of eaglets into juveniles capable of fending for themselves. If adult eagles get stressed, it can lead to infertility and even abandonment.

Bald eagles mate for life, but will take another mate if one of the pair dies. I’ve observed marriage-like behavior from a number of pairs. They often sit on the same branch of a tree, they call to each other when not together so as to “keep tabs” on each other, and they sometimes bicker. They also return to the same nest each year (unless they have a backup nest) if they migrate south.

According to the DEC, egg dates for bald eagles range from March 16 to May 14. According to my data, and I have a lot, those dates seem too late. As I write this article in later May, the eaglets on most nests in our area are already almost full-adult size. These eggs were laid before March 16, according to nest behavior I have observed.

There is a lot of activity at the nest, which goes on before the eggs arrive. First, the eagles need to return from their winter homes, assuming they migrated. Next, the eagles need to tend to their nests — housekeeping, relining with soft “bedding” materials, bringing in more large sticks to see to it that the nest is robust enough to withstand the high winds and rain we see in WNY. Only then can the process of egg production begin.

As you can imagine the eggs are fragile and need to be kept warm almost all the time. Bald eagle eggs are roughly the same size as a tennis ball but “egg-shaped.” They are off-white in color and weigh between 4 and 4.5 ounces.

Disney to lay off 4,000 more employees than it initially reported

Female eagles usually lay two eggs. This is an ideal brood size as the adults can usually feed and care for two eaglets. It is possible for there to be up to four eggs per brood but the chances of survival for four eaglets is low.

Eggs are typically laid 3-6 days apart. Eagle eggs hatch in 35 days. Incubation of the eggs is shared equally by the male and female eagle as is hunting (fishing) for food and feeding the eaglets. It takes an eaglet 10-12 weeks to fledge (develop wing feathers large enough for flight).

So, let’s do the math. Assuming an egg is laid on March 16, and it takes 35 days to hatch; that’s roughly April 20. Then 12 weeks to fledge — that means the first egg laid produces a juvenile eagle that is ready for first flight on or about Aug. 10.

That’s a little later than what I’ve observed but not by a lot.

So, basically, the adult eagles have to feed two eaglets and themselves (double duty) for 12 weeks, and more, since first flight does not mean that the juvenile is ready to fish or hunt. That’s a lot of stress. The young grow very quickly from downy, clumsy eaglets to full-size juveniles.

Yes, juvenile eagles are full-size when they fledge. The nests get pretty crowded when both parents are present.

Enough science? Let’s go to the photography portion of the article.

I mentioned that the Belvidere nest was the biggest I’ve seen. I’ve traveled to the Mississippi River, where I saw more than 100 nests, the Upper Peninsula of Michigan, Wisconsin, Maryland and Pennsylvania, all on bald eagle expeditions, but I’ve never seen a nest this big. I’ve read that a nest in Florida grew to 20 feet in height and weighed 3 tons, but I’ve not seen it.

One of my photos in today’s edition is of the Belvidere nest from more than 200 yards away. I don’t think the photo does justice to the size of the nest. You’ll have to see it to appreciate its size.

Another photo is of the Vandalia nest from a horrible vantage point way up in the forest (in order to maintain the legal distance from the nest). You can see the downy young eaglets. The only way to see eaglets of this size is to have an elevated vantage point. They’re cute at this age but, oh, so clumsy. They kept falling down and struggling to get up as I watched.

The third photo is a classic. This is the Ceres, Pa. nest. It was a brutally hot summer day (July). The nest was exposed to the harsh sunlight. The adult eagle formed an umbrella with its wings, shielding its two chicks, and held that pose for over two hours (probably a lot longer but my patience ebbed at the two-hour mark).

What we won’t do for our children, right?