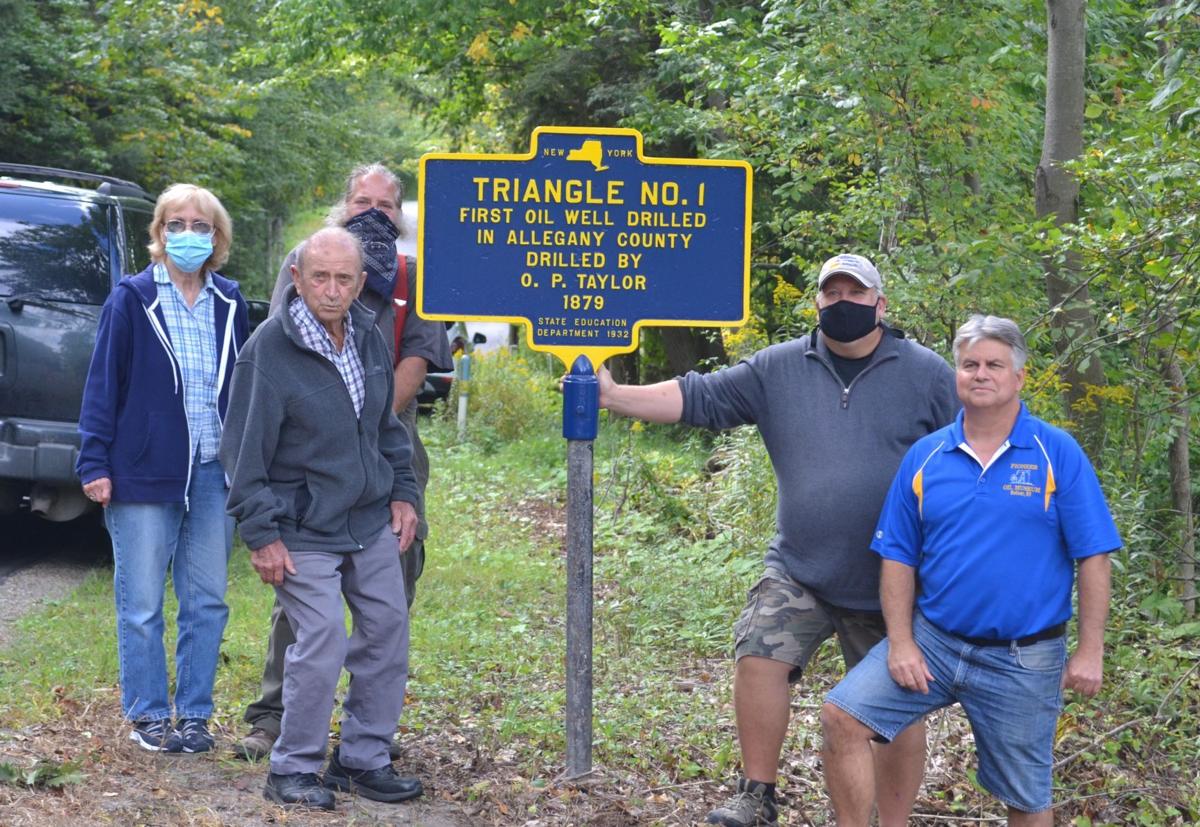 From left are Rose Feenaughty, Robert Richards, Joe Bucher, Bryan Perrin and Kelly Lounsberry, showing the restored historical marker for the Triangle No. 1 oil well in the Bolivar area. 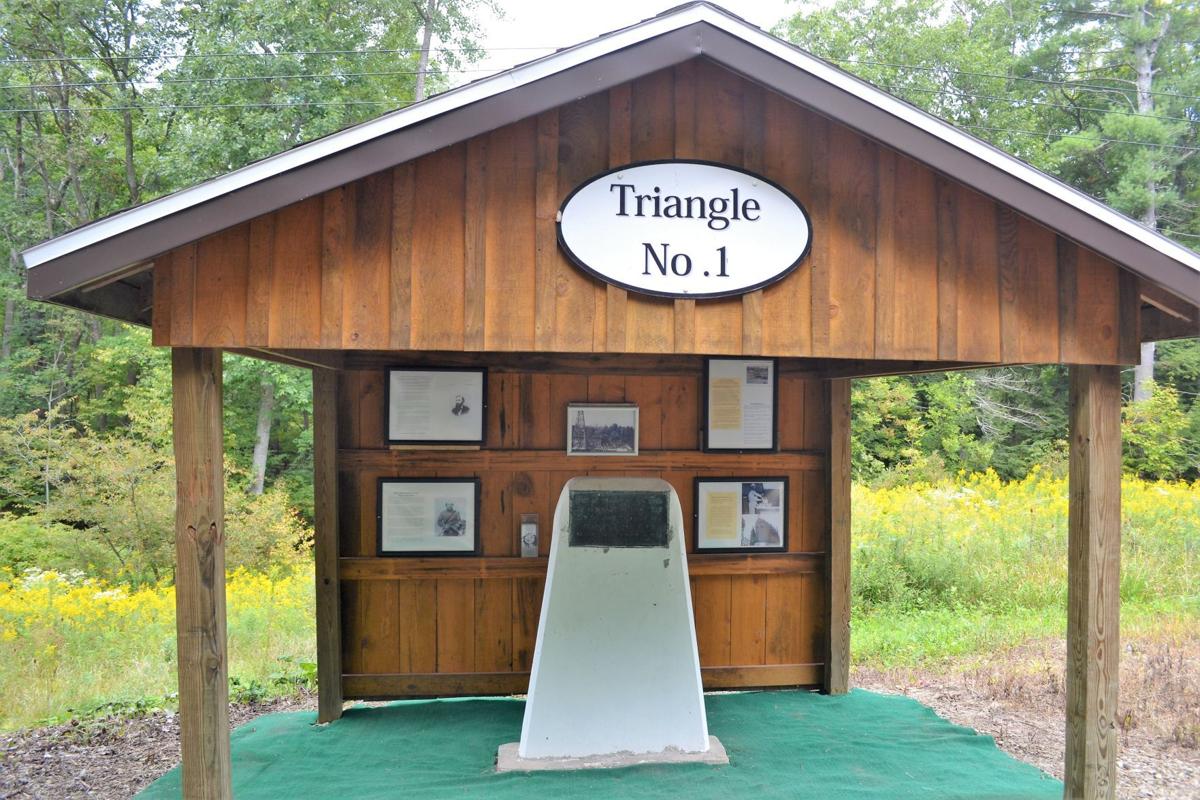 The new Triangle No. 1 pavilion. 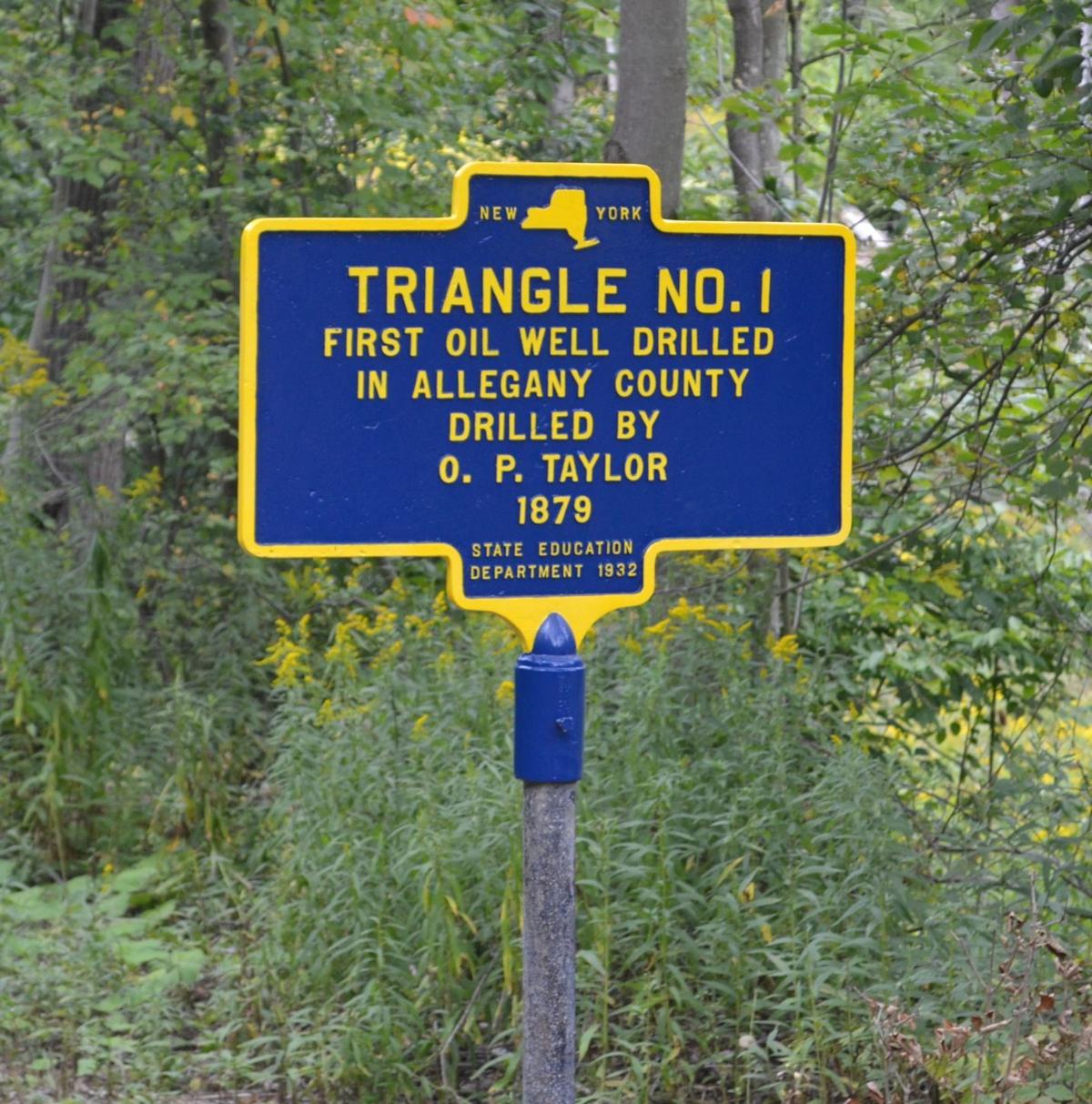 The Triangle No. 1 marker.

From left are Rose Feenaughty, Robert Richards, Joe Bucher, Bryan Perrin and Kelly Lounsberry, showing the restored historical marker for the Triangle No. 1 oil well in the Bolivar area.

The new Triangle No. 1 pavilion.

The Triangle No. 1 marker.

The Pioneer Oil Museum of New York, located in Bolivar, recently celebrated the “re-dedication” of the Triangle No. 1 monument and its associated New York state historic marker.

These two items commemorate Orville P. Taylor and his drilling of the first major oil well of the Allegany County field.

The Triangle No. 1 well was drilled in 1879 near Allentown by Taylor, a former Confederate cavalry officer who came north after the war. Using money invested by family and friends, Taylor drilled two wells, both of them dry. Lacking financial support from investors, Taylor used money provided by his wife.

At the re-dedication ceremony held Friday at the Triangle No. 1 site on Bill Allen Hill Road in the town of Scio, Kelly Lounsberry, a board member of the museum, explains how Taylor was able to successfully drill the well.

“Taylor’s wife, Cornelia, originally from Allegany County, found him despondent, so she sold her gold watch, rings and jewelry to enable him to buy the supplies needed to drill another well,” Lounsberry says. “Incredibly, this well (Triangle No. 1) struck oil when drilled in June of 1879, producing 10 barrels a day for several weeks.”

That well, the first flowing well in the county, paved the way for the oil boom that hit the area in April 1881, at which time the Richburg Discovery Well came in with 70 barrels of oil a day — soon climbing to 300 barrels per day.

The Bolivar-Richburg valley, with a population of approximately 400 industrious residents, grew to some 12,000 fortune-seekers within a year. Richburg’s population soared to 7,000 followed by Bolivar with 5,000 people.

The concrete monument at the historic site was in terrible shape until it was taken under the wings of the Pioneer Oil Museum.

“We discovered that this location had been deeded to the museum in the 1960s,” Lounsberry says. “Upon inspection of the site, we found that the concrete monument was badly eroded with part of the top gone and the gravel and interior exposed to the elements.”

From An Underdog To A Million Dollar Company

The museum board decided to restore the monument and protect it from the weather. Lounsberry says an epoxy compound was applied in layers, bringing the monument back to its original shape before it was smoothed out and re-painted white.

Museum board members decided to further protect the historic stonework for future generations. Using materials donated by Cummins Construction of Cuba, a pavilion was built over the monument. Inside the pavilion, numerous photographs and documents related to the drilling of Triangle No. 1 and the life of O.P. Taylor were placed in weatherproof, exterior picture frames mounted on the wall.

A section of artificial turf, originally part of the Bolivar-Richburg Central School football field and donated by Evingham Site Excavation of Bolivar, was installed on the ground inside the pavilion providing a completed walking surface for visitors.

Due to his accomplishments, O.P. Taylor is known today as the “Father of the Allegany Oil Field.” To honor him further, during World War II, a cargo ship known as a Liberty Ship was christened in his honor. These ships, named after prominent deceased Americans, formed the backbone of a supply line that helped the Allies win the war.

The final part of the re-dedication ceremony involved the unveiling of a restored New York State historical marker. First erected in 1932 by the State Education Department, this marker was taken down, sandblasted and painted. It was then finished with an automotive clear-coat that will protect it for years to come.

With the construction of the pavilion and the restored concrete monument and historic marker, the Triangle No. 1 site has been preserved and improved for visitors interested in the history of the Allegany oil field.

Lounsberry thanked many contributors for their help by telling those in attendance, “We greatly appreciate the support of those people and companies who contributed to the completion of this project. It’s amazing the number of individuals who donated their time and efforts to help preserve and protect this historic site.”