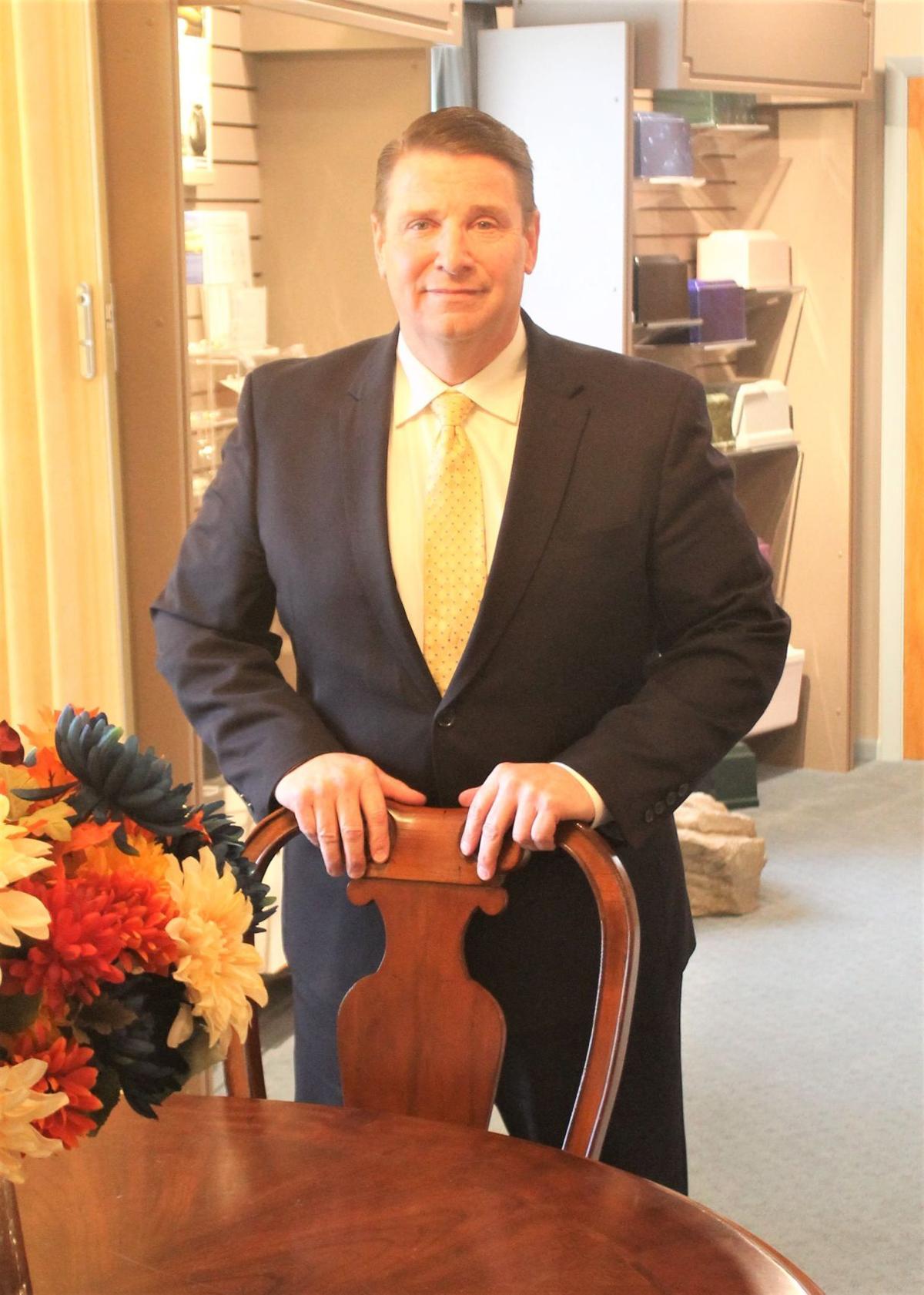 Brad Spink is the third-generation owner of Letro-McIntosh-Spink Funeral Home in Olean, now in its 91st year serving the community. 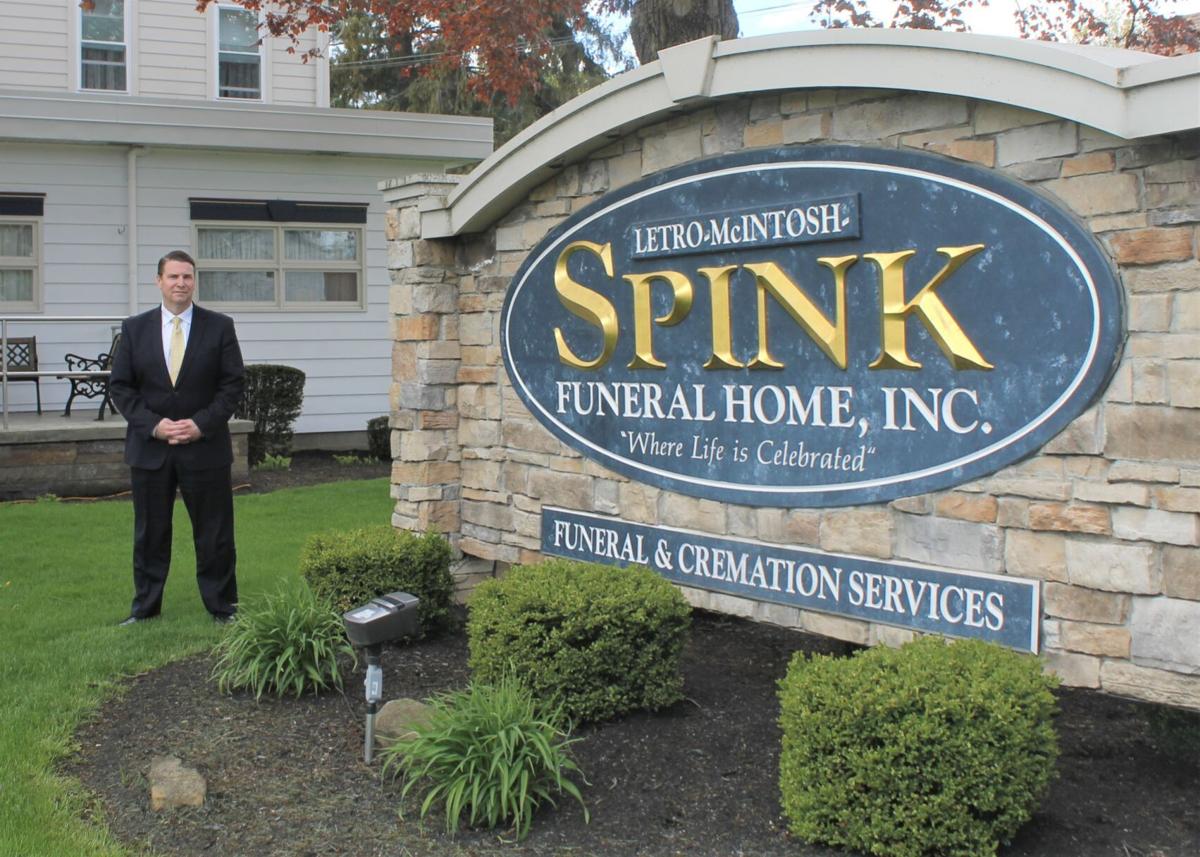 Owner and funeral director Brad Spink stands outside the Letro-McIntosh-Spink Funeral Home at 646 E. State St. in Olean, its location since 1958.

Brad Spink is the third-generation owner of Letro-McIntosh-Spink Funeral Home in Olean, now in its 91st year serving the community.

Owner and funeral director Brad Spink stands outside the Letro-McIntosh-Spink Funeral Home at 646 E. State St. in Olean, its location since 1958.

OLEAN — For nearly a century, the Letro-McIntosh-Spink Funeral Home has helped generations of families through one of the most difficult times they can experience.

Earlier this year, the Spink family marked 90 years of serving the community as a place for loved ones to gather and honor the lives of those who have passed away.

Through those decades, the home has been there in wartime, economic hardship, widespread changes in the city and natural devastation like the floods of 1942 and 1972. And during it all, the Spinks have tried to keep providing that personal service to the community.

“There’s certainly a continuity from generation to generation,” said Brad Spink, owner and funeral director. “People have trusted us not just with services today but services in the future, which is really nice. I don’t know if I would want to do what I do in a different community.”

The Spink Funeral Home had its beginning in February 1931 with its first office at 520 W. State St. After eight years at this location, Emmett E. Spink — Brad’s grandfather — purchased the Herbert Sibley property at 205 N. Third St.

The business continued there with the addition of Emmet’s two sons, Joseph and Phillip, joining the staff. The funeral home relocated to its current location at 646 E. State St. in 1958.

E. Ray Spink — Emmett’s third son and Brad’s father — returned to the Olean area in 1963 after working in several other funeral homes since the early 1950s to join his two brothers in the business, with locations at that time in Olean, Portville and Allegany.

Brad Spink first joined the business in 1984, but soon went to mortuary school and came back fulltime in 1988. At this time, the business evolved to become Letro-McIntosh-Spink Funeral Home and added a location in Cuba a few years later. The business again expanded in 1996 with the addition of cremation services to make it the only local funeral home to offer that service.

Today, Brad Spink continues the family business, but he is also a county coroner, runs the Mount View Cemetery Association and maintains the county veterans’ cemetery on the River Road.

“When I went to school and came back, I didn’t want to just be the director,” he explained. “They all have the same common denominator, but they are completely separate entities. It keeps my job interesting, and you work with a lot of great people.”

Spink said the best aspect of his roles are getting to know the families and finding out what’s important to them. He said the funeral home is the conduit between what the family wants and what can be done and being able to facilitate everything that can happen with a service.

The biggest change in recent decades has been the increase in cremation over a traditional burial, Spink said, especially the past two years with the pandemic. The changing economy and cost factors combined with different ideas from younger generations has also impacted more families deciding to go with cremation.

“When the pandemic came in, it scooted our business ahead by about 10 years,” he added. “I just knew our generation would be okay with cremation, and there wasn’t a crematory here.”

Regardless of what the preparations are, Spink said they strive to keep the same level of compassion and understanding when preparing for a funeral regardless of the business changes and what the families select to do.

THROUGHOUT THE decades, the funeral home has cared for many local families from generation to generation as well as notable community members, from public servants and politicians to doctors and entrepreneurs. Most recently, Spink handled the arrangements for Erick J. Laine, president, CEO and chairman of Alcas, now CUTCO.

When he first started at the funeral home, Spink said it was common for two or three families to hold wakes at the same time with the deceased in subdivided rooms. He said visitations would go for two days as community members would come to see multiple families at the same time.

“Now, our funeral home can hold two visitations at once, but most families don’t want to do that,” he said. “Then they don’t have to worry about kids running around, or they can change the music if they want, so it’s more appealing to that.”

Although the ongoing coronavirus pandemic has impacted every aspect of the death care business — from how services can be arranged to what can and cannot be done with the deceased — Spink said the job was still about performing a service for a family, a daunting task to keep up with.

“We’re looking forward to better weather, and now we’ve got the vaccinations out and less restrictions,” he said. “Got to get a breath of fresh air and hopefully start getting back to normal, which will probably be a new normal.”

As for the building itself, a master plan created several years ago helps keep track of what needs to be done and when the last improvements or updates were made, Spink said. He said with a goal of consistent but subtle changes, the hope is to keep the environment fresh.

“The next step is the hallway is going to be redone, and then the selection room is going to be a hospitality room,” he explained. “There’s a consistent flow of the direction we need to go.”

Like with the crematory, Spink said he’s always wondering what the next new trend and change in the business is going to be. In the meantime, he said his family has been blessed to do what they’ve done with improving the funeral home facilities with increased and improved staffing.

“There’s a plaque out on the wall that my dad put together that I look at all the time, and it starts when Grandpa bought the place in ‘31,” he said. “I got 10 more years, that will make me 67, so I’m going to clear that mark and take it to 100 years, and hopefully set this place up for another hundred after that.”

Spink said the funeral home wants to be good for the community — efficient, cost effective, compassionate and understanding — and is thankful for everyone who has placed their trust in his family in the past and into the future.

“We’re just so blessed,” he added. “My grandpa, my dad, my uncles, everybody, we just love people. That’s what it boils down to.”