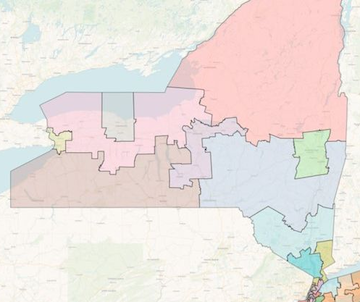 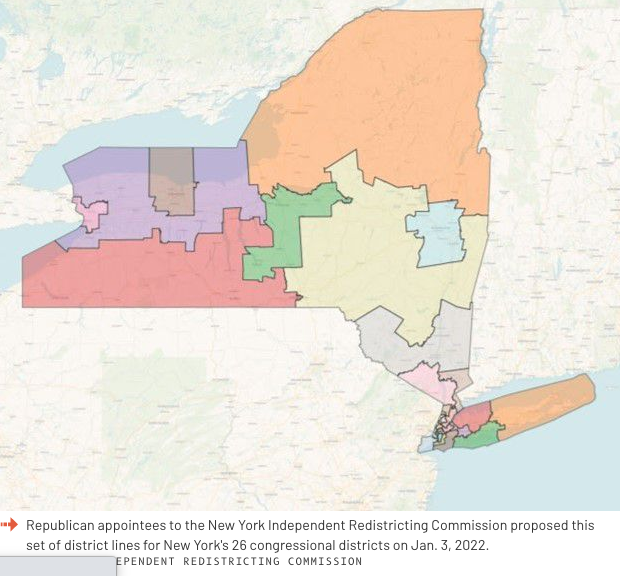 The congressional maps submitted by the Independent Redistricting Commission to the New York state Senate and Assembly retain much of the Southern Tier District that is the current 23rd Congressional District.

State legislators representing Cattaraugus and Allegany counties don’t expect either the Democrat or Republican redistricting plans to pass as submitted and look for a Democratic legislative plan that would target four or five of the eight current Republican congressional seats.

The Democrats’ plan looked remarkably similar to that put forward by Republicans when it comes to the Southern Tier District of Rep. Tom Reed, R-Corning, except for one thing: The district proposed by Democrats includes Orchard Park in Erie County — the home of Rep. Chris Jacobs, another Republican.

State Sen. George Borrello said he applauded the commission’s maps that retained much of the 23rd Congressional District along the Pennsylvania border

“I’m glad to see they understand the value of keeping the Southern Tier district together,” Borrello told the Olean Times Herald on Tuesday. “I still believe the whole Independent Redistricting Commission has been sabotaged by the Democratic leadership. We are being set up for failure, in my opinion.”

Borrello, of Chautauqua County, was among several Republican politicians eyeing a possible run this year for the 23rd District, where Reed will not be running for re-election after six terms.

With the Democrats’ congressional district plan including Jacobs in a Southern Tier District, Borrello is out of the running for 2022.

“I’m not interested in primarying a sitting Republican congressman,” he said.

Reed was caught up in a sexual misconduct scandal last year as he was preparing to run for governor against then-Gov. Andrew Cuomo. He apologized to the woman, an insurance lobbyist he met at a political fundraiser in Minneapolis in 2017, and stated he would not seek election to any office this year.

Borrello said, with the Democrats controlling supermajorities in both the Senate and Assembly, they could pass the plan put forward by Democratic members of the redistricting commission. Instead, Senate and Assembly Democratic leaders want to gerrymander several Republican congressmen out of office, the senator said.

“That’s the only way they can keep their narrow majority in Congress,” he added.

“If it turns out to be an open seat that looks similar to the current 23rd District, I would consider running,” Borrello said. “My focus is continuing in my (Senate) position. I’ve taken no steps on the congressional side.”

If the IRC is taken out of the equation, Borrello said the redistricting map will be very different. Nevertheless, he said he believes “there is a chance of preserving a Southern Tier district. We’re supposed to vote on the maps in 10 days, I’m told.”

If there are not enough votes, legislative Democrats may throw out a completely different map, Borrello said. “That would lead to a series of lawsuits.”

Assemblyman Joseph Giglio, R-Gowanda, agreed with Borrello that both plans will probably be rejected by Democrats in the Senate and Assembly and the majorities will approve their own maps.

COVID Fatigue: Are You Among the 'Vaxxed & Done'?

“They are not terrible,” Gioglio said of the maps produced by the IRC, although he, too, wasn’t real happy with the proposed Southern Tier congressional district going up into Orchard Park, where it would include Jacobs.

When Reed took himself out of the running in 2022, many thought it would mean the disappearance of the Southern Tier district, which currently extends from Chautauqua County in the west to Tompkins County in the east. In fact, initial Democratic maps showed a north-south alignment, cutting up the 23rd.

“I tend to be optimistic,” Giglio said. “In our part of the state, the maps are pretty consistent.” The key, he said, is commonality. Giglio said it was important to him that Cattaraugus and Allegany counties remain in the same congressional district.

In addition, Cattaraugus and Allegany counties continue to be in the same Assembly District, Giglio said. “They will probably move me further east into Stueben County, possibly as far as the city of Hornell. It is important to keep this assembly district intact.”

One declared Republican congressional candidate, Joe Sempolinski, the Steuben County Republican chairman and a former congressional aide to Reed, wasn’t surprised that the IRC wasn’t able to come to an agreement and broke down on partisan lines.

“The legislature will make its opinion of the maps that were released today known very soon,” he said. “However, I believe we are likely far from this process being over.”

In the meantime, Sempolinski said he will continue to listen to the people of the Southern Tier and Finger Lakes.

“I hear from them every day and they are frustrated with inflation, the border crisis, vaccine mandates and crime in our streets,” he said. “We will continue to build toward a victory in November, while we wait for the final district lines.”

Laura Ladd Bierman, executive director of the League of Women Voters of New York State, also said she was disappointed in the commission.

“The intended purpose of the IRC was to create an alternative to having district maps drawn by an incumbent, partisan legislature,” she said in a statement. “Thousands of New Yorkers have participated in the redistricting process, and they deserve a result that respects the state constitutional amendment adopted by voters in 2014.”

Bierman said the failure of the commission to approve a single set of maps “constitutes an abdication of the Commission’s responsibilities, confuses the redistricting process and places the interests of New York state voters in fair representation at risk.”

Without a two-thirds vote by the Senate and Assembly on the proposed redistricting maps, lawmakers in Albany could end up drawing the lines themselves — although the commission gets a second chance to redraw its lines. If that too is rejected, lawmakers would draw new maps.

There are also time considerations. Petitions will need to be signed beginning in March to get on the June 28 primary ballot. Maps would have to be approved before that date.

“We may have to move the primary date,” Borrello noted.