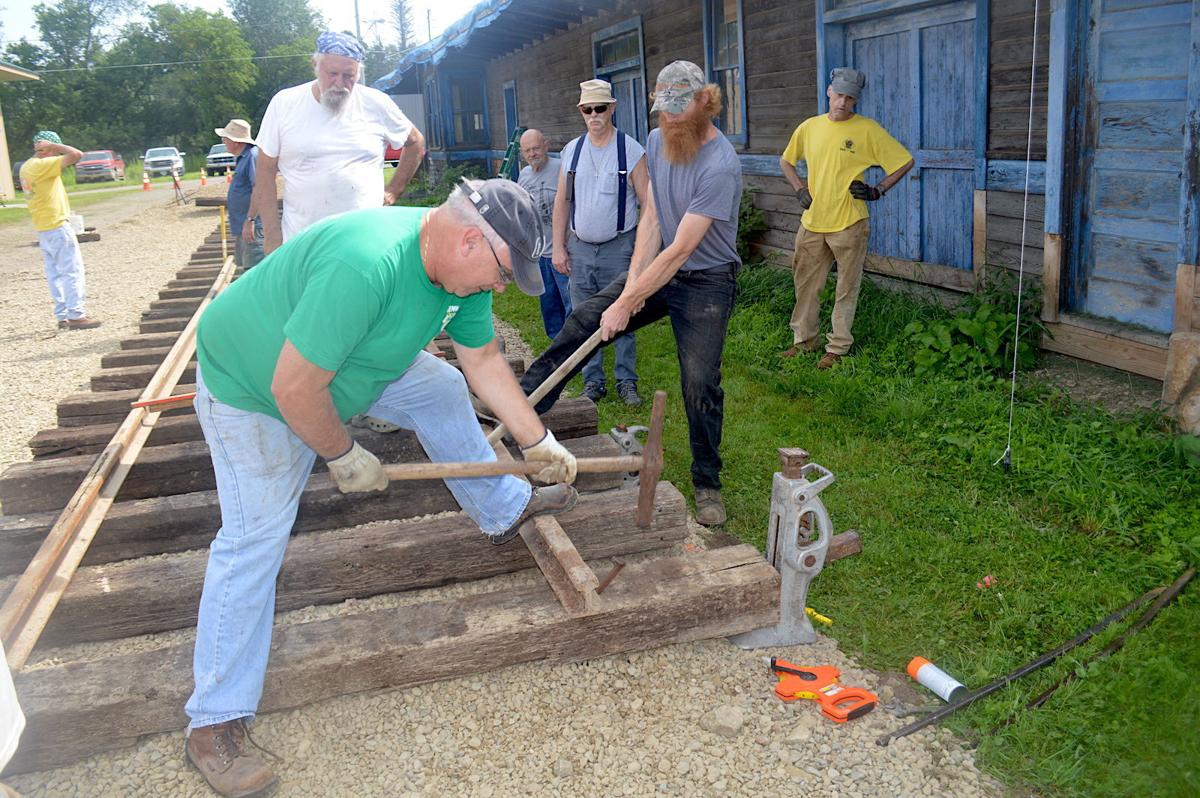 Members of the Rochester and Genesee Valley Railroad Museum set a rail. 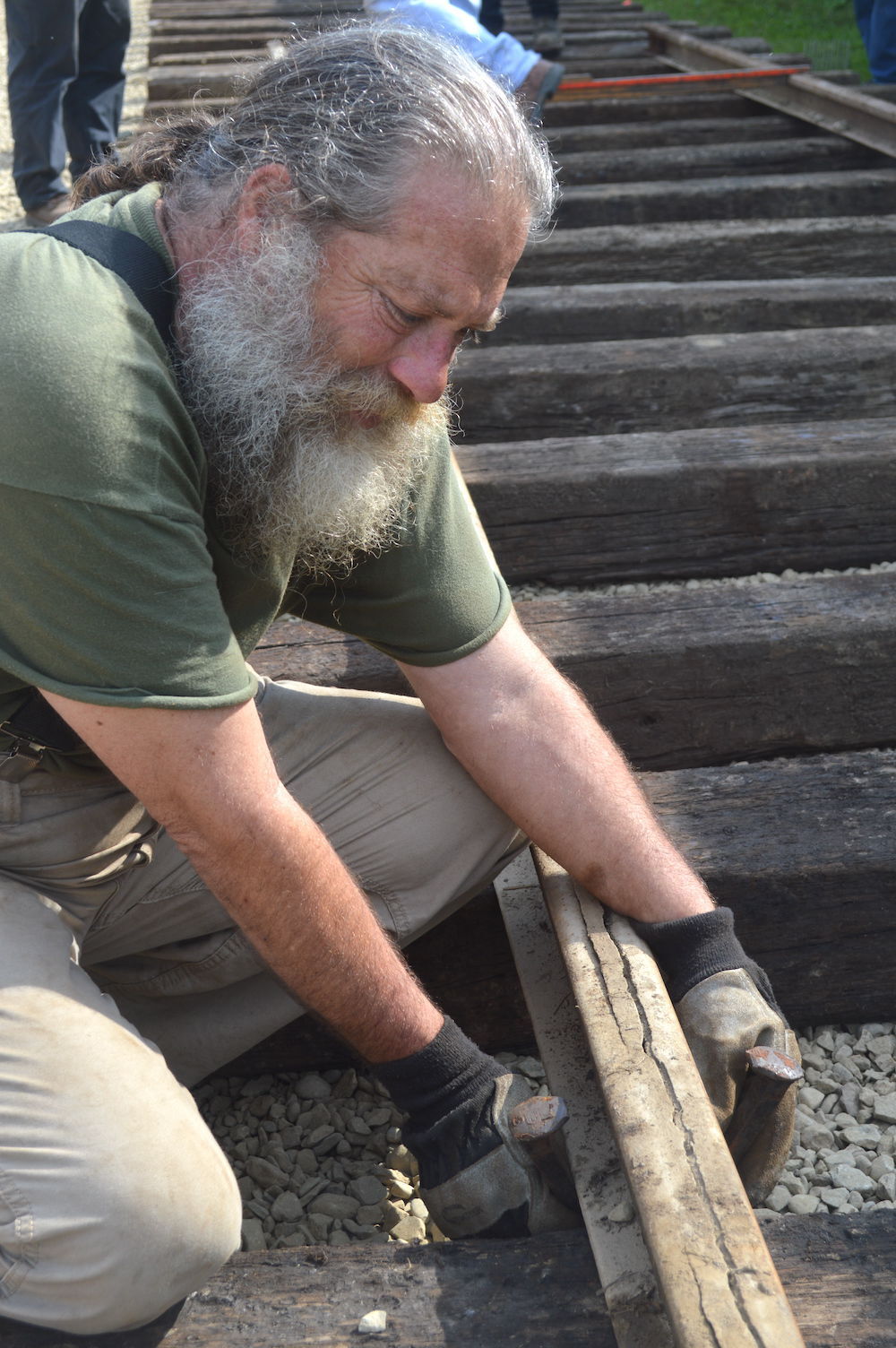 Robert Richards of the Pioneer Oil Museum shows how lipped spikes were placed on either side of the rail to keep them in place. 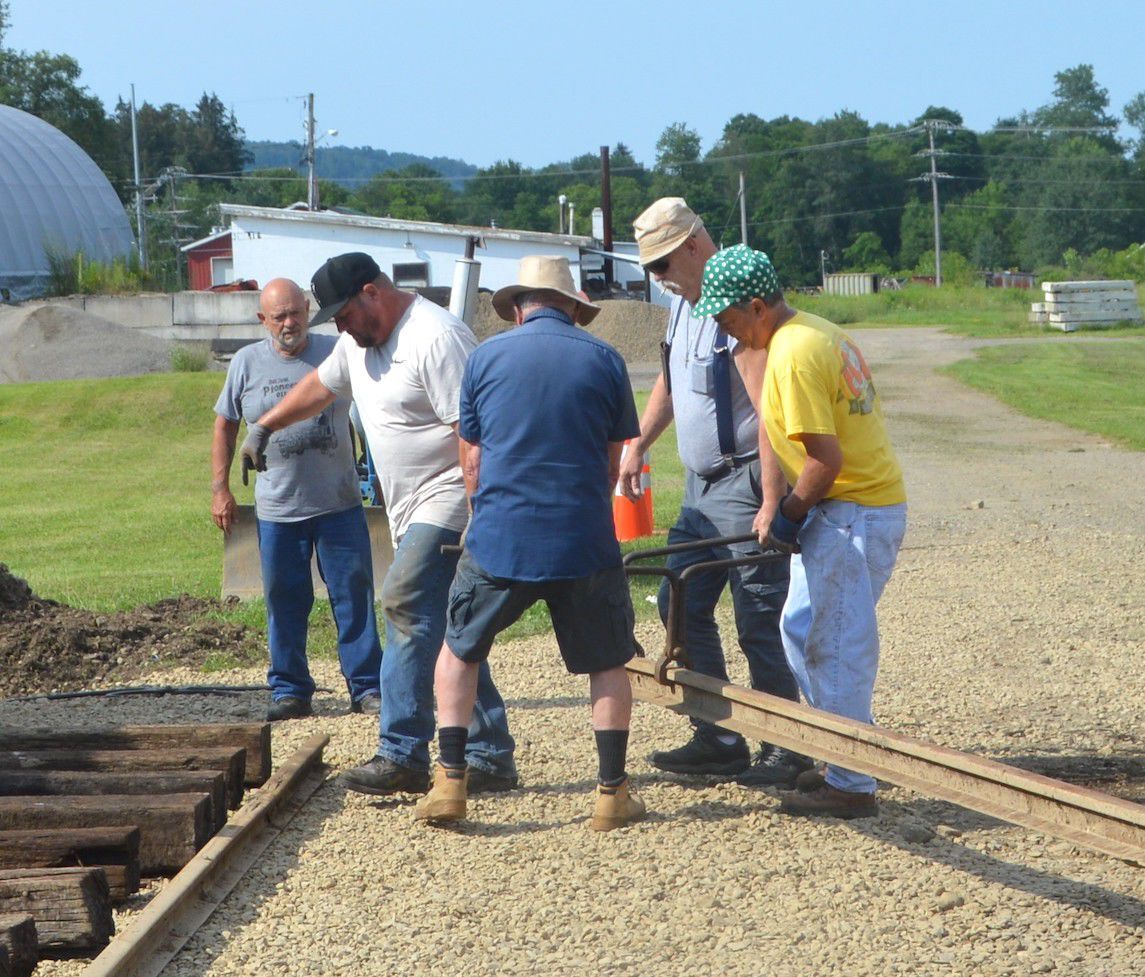 Volunteers use rail tongs to carry a 650-pound, 40-foot-long steel rail into place.

Members of the Rochester and Genesee Valley Railroad Museum set a rail.

Robert Richards of the Pioneer Oil Museum shows how lipped spikes were placed on either side of the rail to keep them in place.

Volunteers use rail tongs to carry a 650-pound, 40-foot-long steel rail into place.

BOLIVAR — The ring of steel hitting steel echoed through the clear morning air for the first time in decades Saturday.

Residents of Bolivar heard the sound of a steel hammer hitting an iron spike mid-morning as members of the Rochester and Genesee Valley Railroad Museum helped members of the Pioneer Oil Museum lay railroad track beside the old Pittsburg, Shawmut and Northern Railroad Depot. The old depot is located on the Pioneer Oil Museum’s land south of Bolivar’s Main Street near the Hahn and Schaffner building.

The project is under the direction of the museum’s Robert Richards who explained that the Pioneer Oil Museum hopes to renovate the old depot and place a PS&N tanker currently located on an old oil lease in Allentown on the steel rails that were put in place Saturday. Both the depot and the tanker need extensive renovation. The Pioneer Oil Museum also has to acquire a railroad flat bed on which to place the tanker and display it and find a way of removing and transporting it from the oil lease.

Neither the rails, 35 wooden ties nor spikes used in laying the track Saturday were new.

Richards explained that the idea of laying the rails came about after a crew cleaning up an old pipe rack in one of the storage buildings on the Pioneer site discovered the rails and bucket of spikes. The old wooden ties were purchased from a man in Warren, Pa.

Railroad enthusiast Dawson Little who at 16 is the youngest member of the Pioneer Oil Museum supporters commented that it was a no brainer as to where the track should go. “The new rails are in exactly the same place where the original PS&N rail line was located,” he said.

Mobile Device Management Sourcing and Procurement Report Forecasts the Market to Have an Incremental Spend of USD 3.9 Billion | SpendEdge

Saturday’s rail laying was a unique experience for the members of the Oil Museum, but it was nothing out of the ordinary for the seven guys who traveled from Rochester earlier in the morning. The members of the Rochester and Genesee Valley Railroad Museum lay track every week during good weather, at their museum site in Rush and wherever their expertise is needed. While they can use modern day equipment, this group prefers to do it the old way. They grab onto the 650-pound rails with rail tongs and move them with manpower. Use a spike maul to set the spikes and drive them in with a heavy sledgehammer making sure the rails stay the proper distance apart with a wooden rail gauge.

Contrary to what most people may think, the spikes do not go through the rails. They are held in place by the lip on the spikes which are placed on each side of the bottom of the rail. Which may account for why there were so many derailments, Little suggested.

The project is expected to take some time. “We’ll get it done when we get it done,” Richards said.

Funds have to be raised for the renovation work and purchase of equipment. Until then, the group is just happy the steel rails are in place.

Historically the Pittsburg, Shawmut & Northern Railroad began life on Aug. 2, 1899, with the merger of five small railroads in New York and Pennsylvania. The main line consisted of approximately 190 miles of track extending from Brockway, Pa. to Wayland with several branches joining in from Olean, Morain and Canaseraga to culminate in Hornell. Principal shops were located in Angelica (car shop, paint shop, maintenance) and St. Mary’s Pa. (motive power shop).

The expense of connecting the divisions and upgrading the physical plant to handle coal trains coupled with the failure of the PS&N’s principal bond underwriter forced the company to declare bankruptcy in 1905. The company would continue to operate in receivership until 1946 when the bankruptcy was converted to a trusteeship.