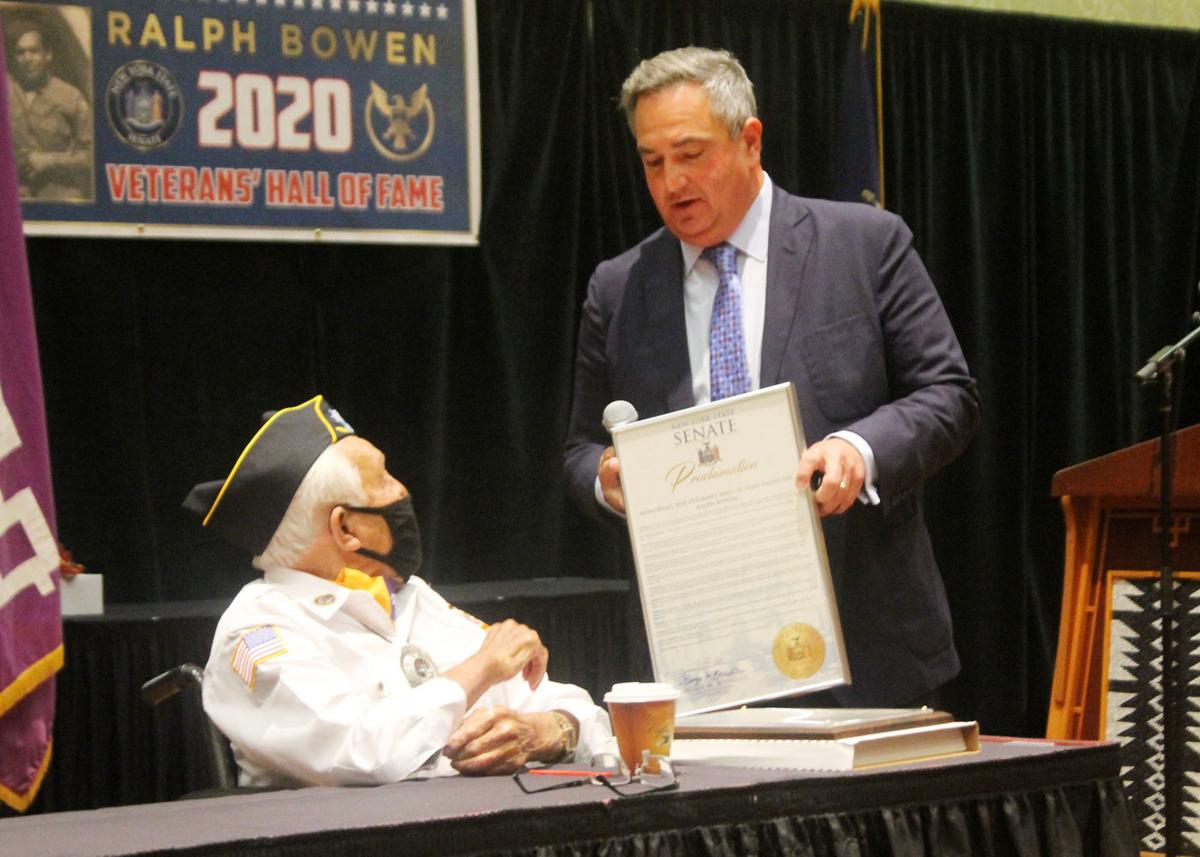 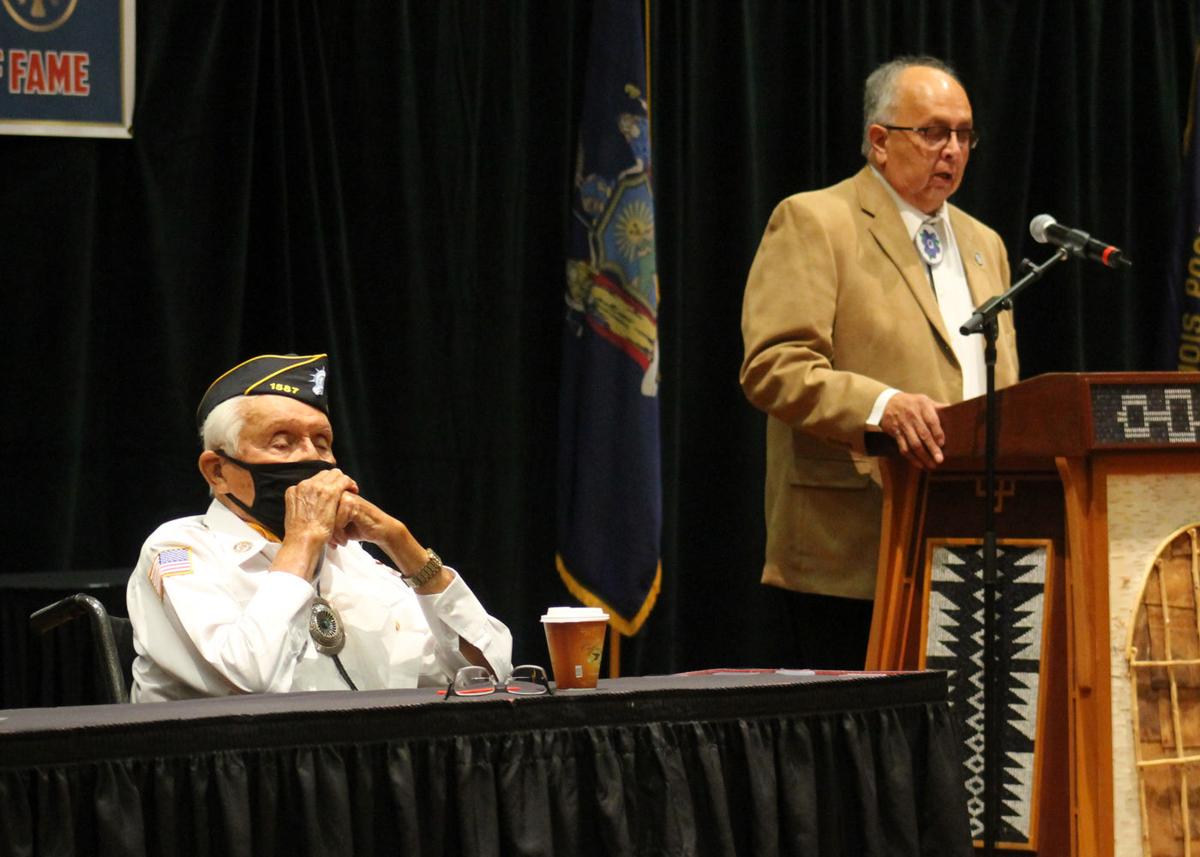 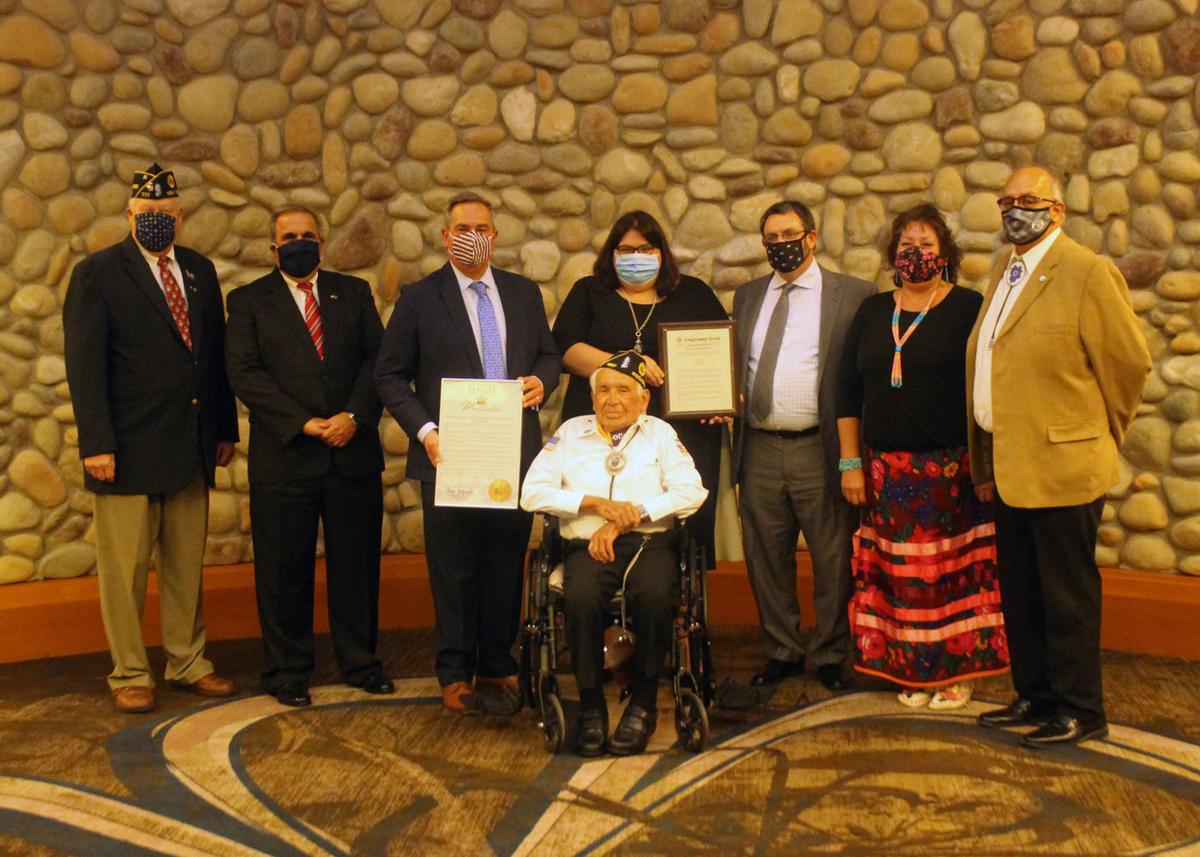 Bowen, who turned 98 on Aug. 8, is the last surviving WWII veteran from the Seneca Nation’s Allegany Territory, and is the second-oldest veteran in Salamanca. He served as a sergeant in the U.S. Army Air Forces.

Surrounded by friends and family for an induction ceremony held at the Seneca Allegany Events Center, Bowen was honored by Seneca Nation officials, state representatives and special guests gathered to celebrate his life and military service.

He was nominated to the Veterans Hall of Fame by state Sen. George Borrello, R-Chautauqua.

“This is something I never expected. It was a surprise,” Bowen said. “It’s hard to believe sometimes, thinking about it.”

Serving from 1941-45, Bowen fought in the European Theater as an aerial gunner aboard a B-24 Liberator heavy bomber, helping to liberate France and Europe from Nazi occupation. He was a member of the 15th Air Force’s 450th Bombardment Group, 723rd Bombardment Squadron, flying missions over France, Austria, Germany, the Balkans and Greece.

“When he walked into that U.S. Army Recruiting Office in Buffalo, he didn’t know what dangers he’d face or if he would ever return home,” Borrello said. “All he knew was that America needed his help and he was willing to risk his life for the sake of liberty and freedom.”

Trained as an aerial gunner, Bowen manned a .50-caliber machine gun in the waist of his B-24, fending off attacking German fighter planes, whose pilots waited to jump U.S. bombers after American escort fighters were forced to turn back because they had shorter ranges than the bombers.

It wasn’t until the Allies established air bases in France, later in 1944, before U.S. fighters could escort the slower bombers over targets in Germany.

Bowen protected his plane and his fellow airmen so they could complete their missions in the face of the swarming German Messerschmitt 109s and Focke-Wulf 190s. The crew was tasked with bombing factories, refineries and other high-value targets to break the Nazis’ ability and will to continue the war.

There was a high attrition rate of the U.S. heavy bombers that flew over Germany.

“I am honored to be able to recognize Ralph Bowen for his service during World War II,” Borrello said. “Recognizing his bravery and valor in the Veterans’ Hall of Fame will ensure his achievements and example endure to inspire others.”

Seneca President Rickey L. Armstrong Sr. said Bowen’s entire life has been one of service to his community, whether as a five-term member of the Seneca Nation Tribal Council, a Seneca Nation Marshal, a judge on the Nation’s Peacemakers Court and Surrogate Court or as a pastor of the Red House Baptist Church.

“As the Seneca Nation president, and a fellow Armed Forces veteran and Seneca, I am honored to recognize the service and accomplishments of Ralph Bowen,” Armstrong said.

Jacqueline Phelps, representing U.S. Rep. Tom Reed’s office, said it was an honor to celebrate a man from the Greatest Generation, saying Bowen’s sacrifice and decision to join the military to defend the country’s freedoms is something that can never be repaid.

“Thank you for your service, and thank you for continuing, after your returned, to serve the Nation and all of us,” she said.

State Assemblyman Joe Giglio lauded Bowen’s contributions to both the country and his community, calling him a “real example of a life well-lived.”

“His service from a young age when he enlisted after the combing of Pearl Harbor through today, when he is still doing wonderful things for his community, has made our small part of the world a much better place to live,” Giglio said of Bowen.

Steve McCord, Director of Cattaraugus County Veterans’ Services, said Bowen is a perfect example of the generation that saved the world from oppression and tyranny during World War II.

“Mr. Bowen is a shining example of the Greatest Generation and the epitome of a combat vet,” McCord said. “When he speaks of his time at war, which isn’t often, he never speaks of the horrors he endured but rather speaks of the friendships and comaradarie that he developed with those he served with.”

Representing Salamanca Mayor Michael R. Smith’s office, Glenda Taylor said in addition to his service to the Seneca Nation government he was also a language teacher.

“Mr. Bowen, you have given our community a role model to admire and to emulate your characteristics of honor and service,” she said.

In July 2019, Bowen was presented with France’s highest award, the French Legion of Honor, for his role in liberating France from Nazi occupation. He is also the first Seneca and only second Native American to receive the appointment of Knight in the Order of the Legion of Honor.

A member of the Snipe Clan, Bowen was raised in the Coldspring community of the Allegany Territory. He is the father of Jacqueline, Dennis and Rebecca. Following his military service, Bowen returned home and worked as a union laborer and ironworker.

Ralph Bowen said, “I always thought that I’m just one of the fellows running around Salamanca and the reservation, but I’m glad to be alive today. And I want to thank you for being here. It gives me a boost. Thank you so much. It’s something I never expected in my life.”