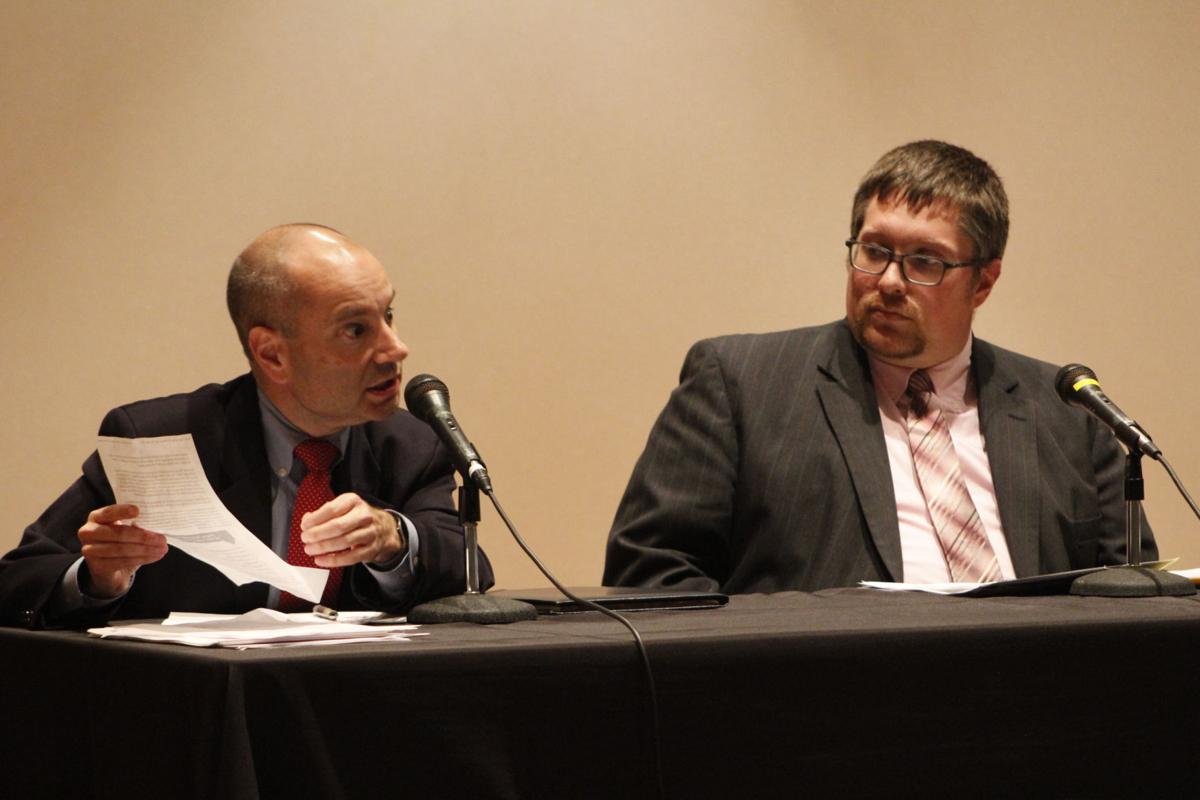 Panelists Chris Bopst (from left), a Buffalo attorney, and Eric Talbot, a regional member of the state board of New York State United Teachers, discuss New York state’s upcoming vote on a constitutional convention Wednesday night at Jamestown Community College’s Cutco Theater. The panel aimed to inform residents about the convention, which, if approved, could alter the state constitution. 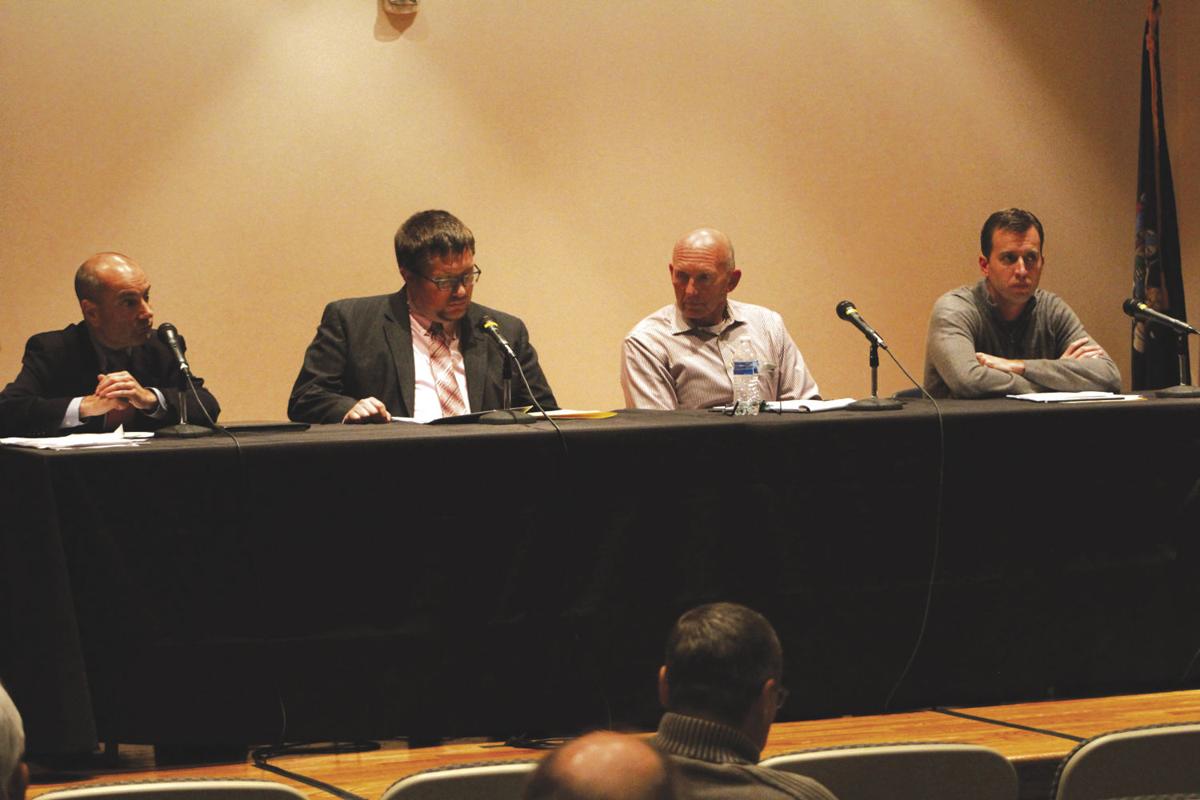 Panelists Chris Bopst (from left), a Buffalo attorney, and Eric Talbot, a regional member of the state board of New York State United Teachers, discuss New York state’s upcoming vote on a constitutional convention Wednesday night at Jamestown Community College’s Cutco Theater. The panel aimed to inform residents about the convention, which, if approved, could alter the state constitution.

OLEAN — Nearly every hand in Jamestown Community College’s Cutco Theater went into the air Wednesday night when audience members were asked if they’ve seen signs around their neighborhoods telling them to “vote no” to a constitutional convention.

However, those same, roughly 50 attendees also had plenty of questions about the ballot measure that, if approved, could lead to big changes to New York state’s constitution.

“You’ve seen the signs, but you might not know why you want to vote no,” said Eric Talbot, a regional member of the state board of New York State United Teachers and one of four panelists who discussed the constitutional convention before the crowd.

The panel, sponsored by the Citizens Action Network of Southwestern New York and the Olean Times Herald, allowed panelists, as well as audience members, to lay out arguments both for and against holding a constitutional convention. The question is posed to state residents every 20 years and will appear on the ballot again Nov. 7.

If approved, some 204 delegates would be voted on the following November and then meet for a convention in April of 2019. Any proposed changes to come out of the convention would then have to approved by voters on Election Day 2019.

Chris Stanley, organizer of Citizens Action Network of Southwestern New York and a St. Bonaventure University theology professor, said while many in his Olean-based grassroots group consider themselves “politically on top of things,” even they knew little about the vote.

“So we thought, ‘We want to learn about this more, let’s put together a panel and invite the public to it and we could all learn together about what this is all about and try to educate ourselves prior to the election,’” Stanley said.

The panel, moderated by Times Herald Managing Editor Jim Eckstrom, gave each panelist 10 minutes to present their arguments before the audience got to ask questions. While the panelists debated and presented counterpoints, some remarked their main goal was to simply better inform people about the vote.

One of the panelists, Buffalo attorney Chris Bopst, said the convention is a way for state residents to make necessary changes that the New York State Legislature won’t.

“The whole reason we vote on this every 20 years is so we’re not held hostage by a legislature that’s unwilling or unable to make the changes that we as a state need,” he said, “reforms that citizens desperately want, reforms the state desperately needs, and reforms that the legislature is not going to enact.”

Bopst, who noted he wrote editorials in support of the convention during the last vote in 1997, said the convention is practically the only way voters will be able pass legislation on campaign finance reform, as well as capping outside income and setting term limits for legislators.

“Do you really think the legislature is going to term limit itself? I don’t think so,” he said.

However, Talbot, a Cuba-Rushford Central School District teacher, called the notion that the convention puts decision making in the “hands of voters” a “myth.” While anyone can be elected a delegate, whether they hold public office or not, Talbot said 154 out of the 186 delegates during the state’s last constitutional convention in 1967 were people that already held public office.

“So when people say it’s a people’s convention, I think that’s very false,” he said.

Bopst said he too wanted to dispel myths, including one of Talbot’s concerns that special interests groups will use the convention to push forth agendas and that state pensions could be reduced. Bopst argued many of the groups in favor of the convention, like the New York State Bar Association, are not “reactionary groups” looking to take away rights, and that polls show state residents are in favor of expanding rights for labor workers, women and the environment.

“Again Upstate New York, where we all live and work, is going to be left out and we won’t be able to affect any changes we want to see for the values that we hold here,” he said, adding that delegates could propose changes on gun rights and abortion. “... These things are going to turn our society upside down.”

Michael Brisky, Republican commissioner of elections for Cattaraugus County and who is also against the convention, agreed with Decker.

“In addition to that, nine senatorial districts are on Long Island, and approximately 29 senate districts are south of Westchester County,” he said. “That’s kind of an alarming number. It is based on population, I understand that, but there’s already a method where constitutional amendments make it to the voters — it’s called the state legislature.”

When it was the time for the audience to ask questions, one woman noted she’d rather amendments be proposed one at a time so she could better inform herself on the issue.

“If we have the constitutional convention, we are going to get perhaps flooded with many issues … and we will not have enough time to be as informed on each of these issues,” she told the panel.

Talbot encouraged attendees to educate their friends, families and co-workers about the convention, noting recent polls show half of all state residents still do not know what the convention is. Bopst said in 1997, the last time the question of a constitutional convention was posed on the ballot, 1.4 million people said no, 800,000 said yes, and 1.5 million did not even answer.