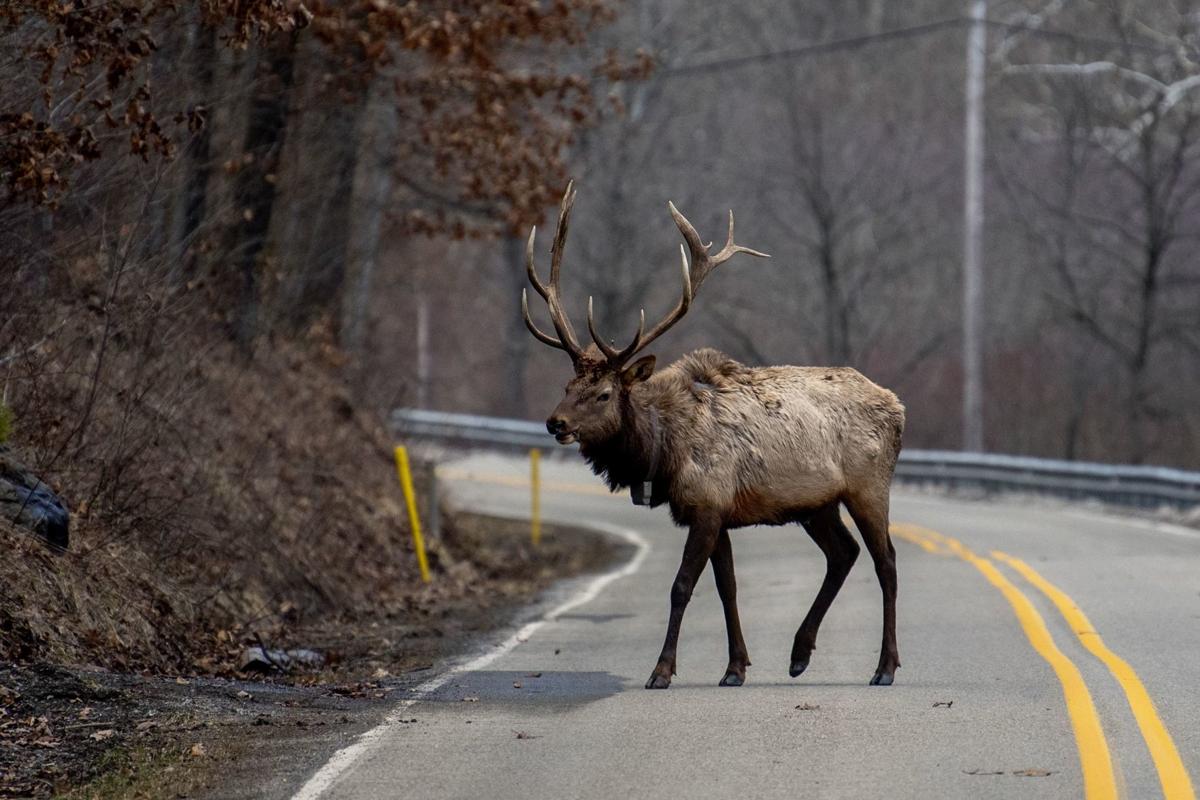 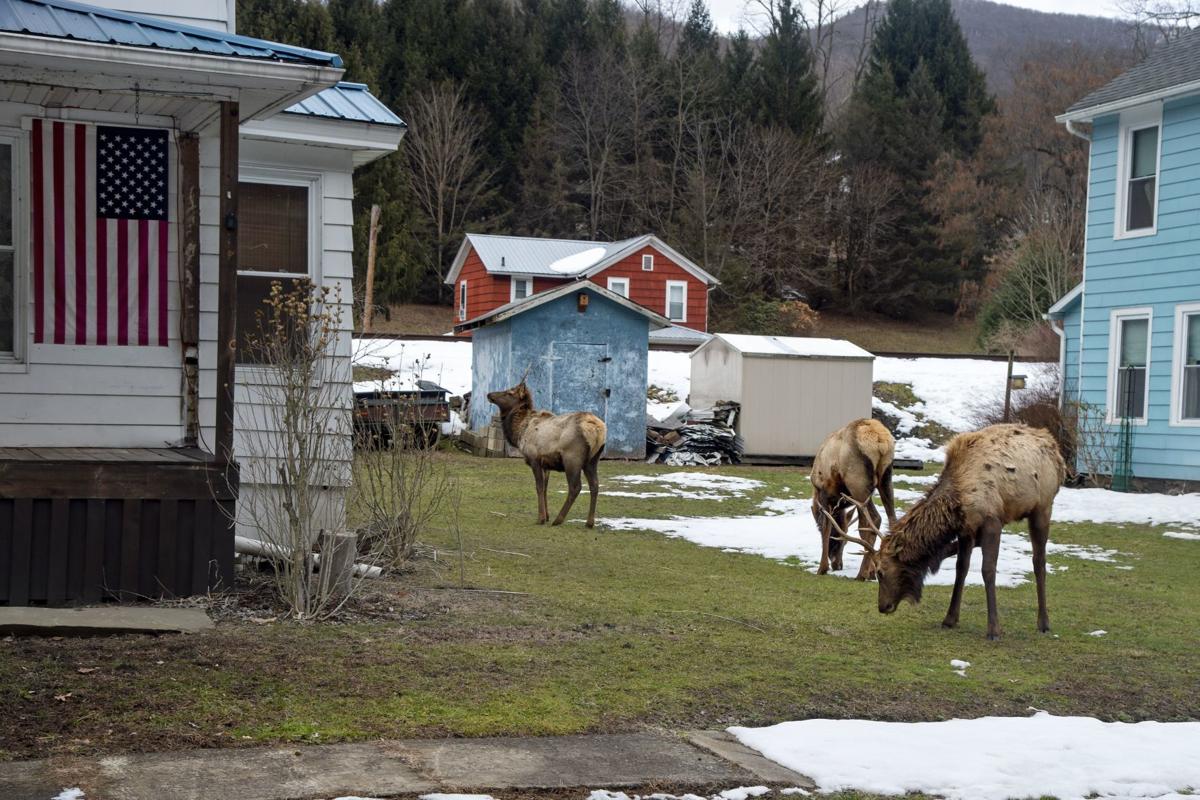 Elk in Driftwood, Pa., where the amount of snow this year brought the herd down from higher elevations into the valley in search of food — mainly grass in the yards of homes. 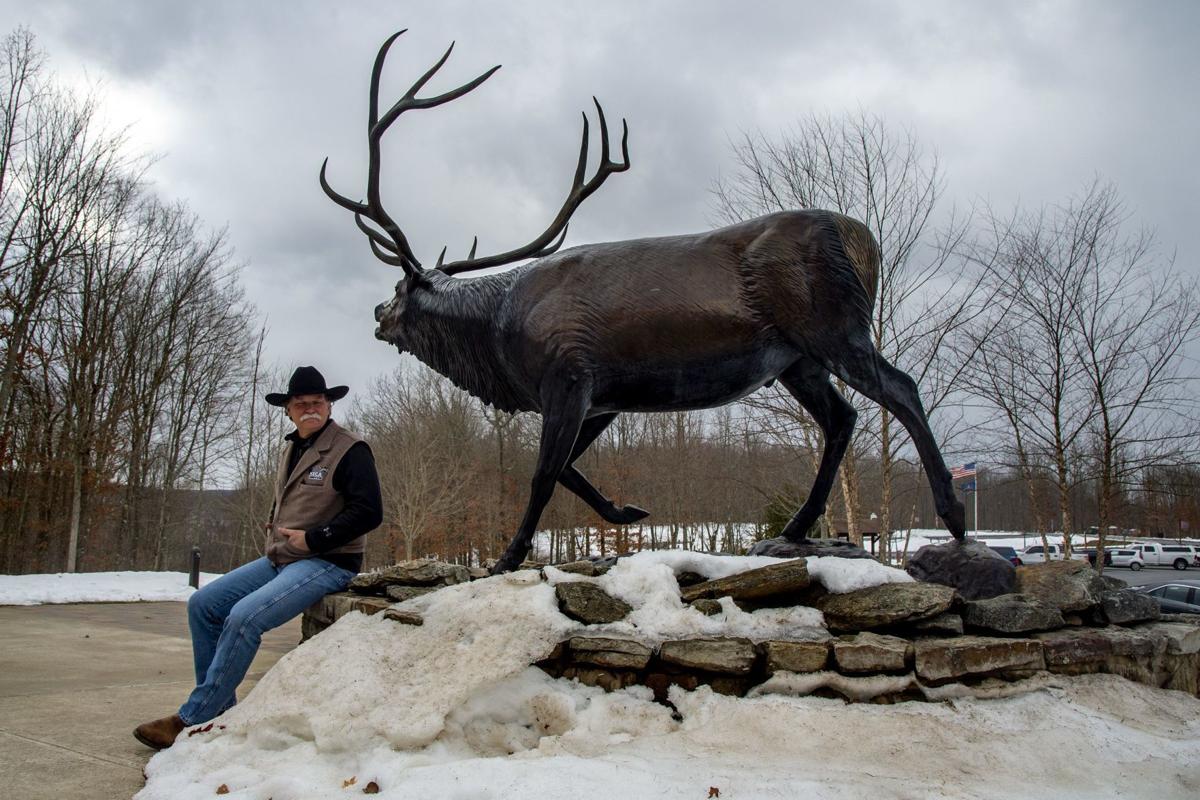 Rawley Cogan, president, CEO and co-founder of the Keystone Elk Country Alliance poses at the elk sculpture in front of the Elk County Visitor Center in Benezette, Pa.

Elk in Driftwood, Pa., where the amount of snow this year brought the herd down from higher elevations into the valley in search of food — mainly grass in the yards of homes.

Rawley Cogan, president, CEO and co-founder of the Keystone Elk Country Alliance poses at the elk sculpture in front of the Elk County Visitor Center in Benezette, Pa.

They were mostly females, known as cows, with a lone, young bull nearby that sported two thin antlers called spikes. Some elk sat. Some stood. All of them were massive, some three times the size of whitetail deer, and none cared about the car idling a few feet away.

Inside the store, a former Catholic church that features a large painting of a bespectacled elk on its exterior, owner Eric Blythe, 43, said he opened in August, and quickly filled the space with elk shirts, stuffed animals, even elk masks.

“It’s been a hard winter for the elk,” Blythe said, looking at the herd through a side window. “They’re hungry.”

In 2020, people were hungry to see those elk in Benezette. Once hunted to extinction in the state, the elk’s carefully managed resurgence has been nothing short of a blessing for the 180 people who live here, and the wider, multicounty area in the northwest part of the state known as the Pennsylvania Wilds.

The peak of elk tourism season is August through fall during the “rut” when they mate. That’s when old bulls square off to fight over cows, and their haunting bugle can be heard across valleys. There’s few other places to hear that sound east of the Mississippi River.

Elk tourism, like many outdoor activities across the country, appeared to be pandemic-proof. The ability to have a personal safari without leaving your car caused traffic jams last year in Benezette.

“I know, it’s hard to imagine, but cars were backed up for miles,” said Janice Stiffler, the new owner of the Benezette Store, Campground and Restaurant. “It was crazy nuts. But a good crazy.”

Snow was still deep at the visitors center in early March, built high atop a hill on an old Christmas tree farm. The building opened in 2010 and resembles the sort of woodsy lodge you’d see at the Grand Canyon or a ski resort in Colorado. It was constructed with local wood and stone and crammed with all-things-elk, including large, taxidermied replicas, piles of antlers, a 4D theater, even a separate building for gatherings. Several weddings are already booked there for this year.

“People needed to get out and they came here,” Rawley Cogan, president of the Keystone Elk Country Alliance, said in his office there.

Cogan, who wore a black cowboy hat, said the center’s attendance record — 520,000 visitors in 2019 — would have been broken last year if not for COVID-19 precautions.

“Last year, we had 518,000 people come through here and we were closed for two months due to COVID,” he said. “It was a bit of a double-edged sword because we had to cancel many of our large fundraisers last year, and we’ve already canceled some this year.”

Cogan, a former elk biologist for the Pennsylvania Game Commission, credited former Gov. Ed Rendell for having the vision to see what the rugged, mountainous area could be. Elk County, with a population of just 30,000, is 265 miles northwest of Philadelphia.

“He was raised in Manhattan and was the mayor of Philadelphia, so how ironic is that,” Cogan said. “He saw what others probably couldn’t see. He made the stars align.”

The commonwealth invested $6 million into the property, with the alliance coming up with an additional $6 million through fundraising. Rendell said seeing elk for the first time made the visitors center an easy sell.

“I mean, they’re unbelievable. They market themselves,” he said. “We made what was a relatively small investment and it paid off really well. It’s something I’m very proud of.”

CrossTower launches G-Coin® Digital Gold in the US

Don't Snow Shovel Your Way to a Heart Attack

Elk, which can weigh up to 1,000 pounds, once roamed through much of Pennsylvania, with ranges that extended north into New York and as far south as Georgia. Settlers hunted them down through the 1800s, and in Pennsylvania, a small population remained, mostly in Elk, Cameron and McKean counties. The last elk, according to an extensive historical narrative written by the Pennsylvania Game Commission, was allegedly killed in 1877 in Centre County.

In 1912, the game commission decided to reestablish an elk herd in Pennsylvania. The state bought 50 of them at $50 a head from Yellowstone National Park and hauled them east by train. More shipments followed, and in 1923, the game commission allowed a restrictive, two-week hunting season for bulls. It was illegal to hunt elk from 1931 to the early 1980s, when a lottery system was put in place that allowed a limited number of people to hunt them.

Today, all of the estimated 1,400 elk living in Pennsylvania are descendants of those western transplants. The game commission oversees three, short hunting seasons, where thousands of hunters pay for the chance to get a license and few are chosen. The drawing for those licenses takes place at the annual elk expo at the visitors’ center in August. According to the game commission, 133 elk were killed during hunts last year.

As spring dawns, a new crop of tourists will come to the area to scour the woods and collect them as decorations. They call it shed hunting and some of the wilier hunters are already there.

“There’s old timers out here who can look at bull and tell exactly when his antlers are going to drop,” said Jeff Gauger, director of development for the Keystone Elk County Alliance. “It’s like they have a sixth sense.”

Cabin and cottage rentals are growing in the area and most are booked long in advance for all forms of hunting, as well as sightseeing. The visitors center has its own rental home on the property.

“Some people will spend the whole month of September at the campground,” said Stiffler, who purchased the general store and campground in October.

On a recent tour of Benezette and surrounding communities, Gauger spotted nearly 100 elk. Some appeared in fields above the Dents Run Viewing Area, which has a wheelchair-accessible ramp and planted fields where elk graze. In Driftwood, Cameron County, massive bull elks ate grass in between homes, their massive antlers deftly avoiding bird feeders and clothes lines.

While coyotes and black bears occasionally may prey on elk calves, an adult elk has no real threat in the wild in Pennsylvania. Some are hit by cars, but Gauger said elk aren’t as skittish as deer and don’t run into the road.

Elk do run into trouble when they begin to graze on farmland, Cogan said. That’s happened a bit more than usual this winter because heavy snowfall kept grass covered for months. During the early decades of the elk reintroduction, tension between farmers and the state were high. Most were shot on sight. Cogan said today’s farmers are more reasonable.

“They can put a real hurting on a crop,” Cogan said. “So we try to work with them and help with fencing.”

Cogan, Gauger and business owners say the tourists, for the most part, haven’t run into problems: no one’s been injured by an elk — but they knock on wood when they say that. While the elk in Benezette look nearly tame, they are wild, and large. Incidents happen yearly across the country, particularly during the rut when bulls are ready for a fight.

In response to the influx of tourists and the potential for injury, the state has issued “Elk Smart” protocols, with signage in Elk country that warn visitors to stay 100 yards away and never feed or name them.

With the herd larger than ever, officials are monitoring elk movement. The state would like the elk to move north, and possibly east into Potter and Tioga counties, where the population is still relatively low.

“Elk live in the wildest places we have left in this state,” Cogan said. “That’s something to celebrate.”