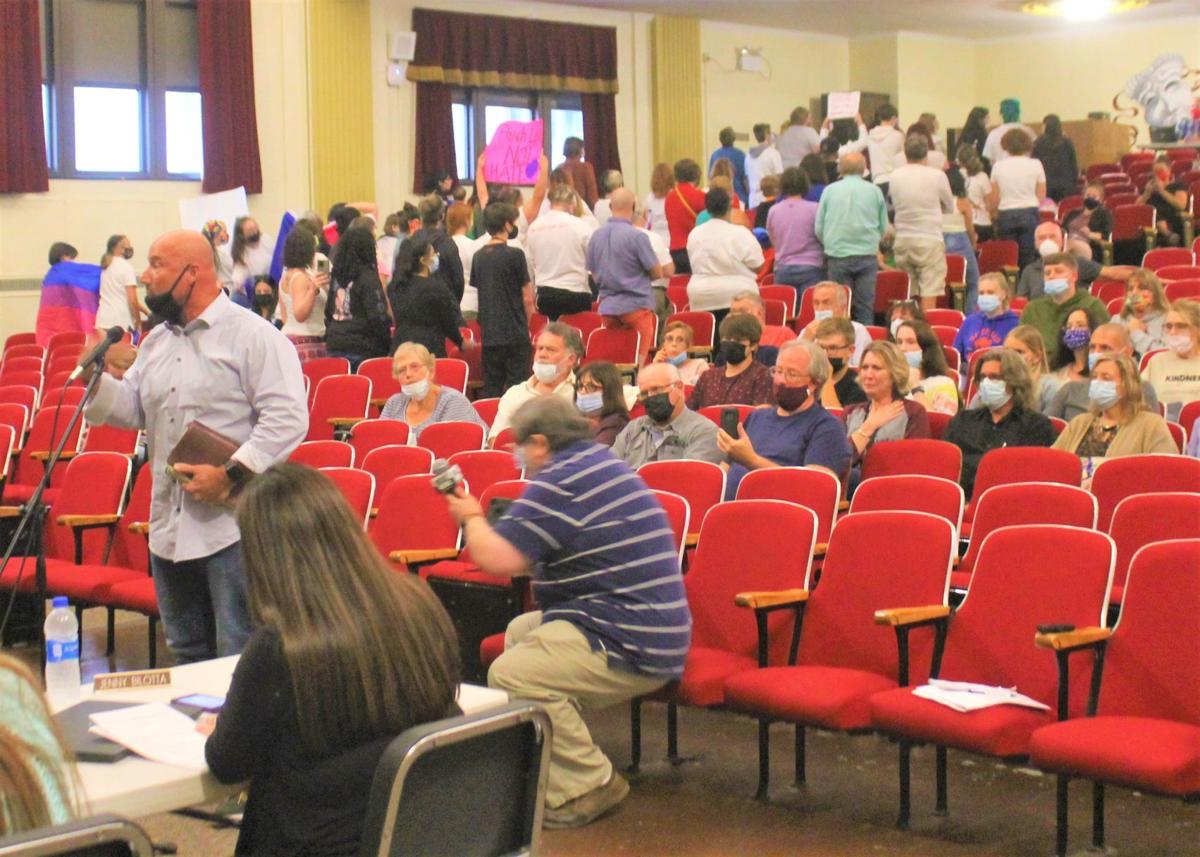 Sean Obergfell (standing at left) addresses the Olean Board of Education about freedom of religion following community concern over a district principal's comments as a pastor at a local church. 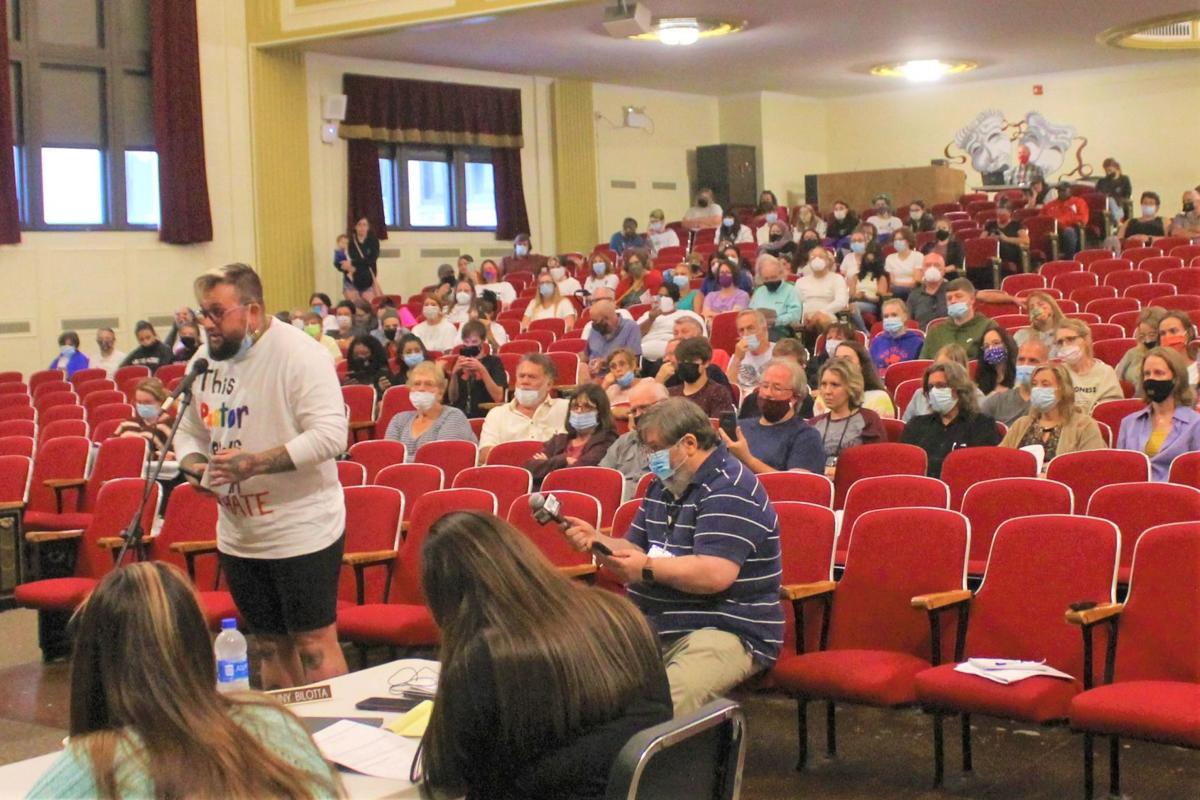 Leo Wolters-Tejera (standing at left) speaks to the Olean Board of Education about concerns from the community over a district principal’s comments as a pastor at a local church.

Sean Obergfell (standing at left) addresses the Olean Board of Education about freedom of religion following community concern over a district principal's comments as a pastor at a local church.

Leo Wolters-Tejera (standing at left) speaks to the Olean Board of Education about concerns from the community over a district principal’s comments as a pastor at a local church.

OLEAN — More than 100 community members gathered Tuesday at the Olean Board of Education meeting to express both concerns and support for Joel Whitcher, principal at Olean Intermediate Middle School, and his religious practice.

Those calling for Whitcher’s removal say his preaching is hate speech towards queer, Muslim, Democrat and pro-choice individuals. Others supporting Whitcher say the principal has never expressed hate and he loves the children of the district.

“We have a wonderful community. This board of education will work through this problem,” said Superintendent Rick Moore during the meeting. “I’ve probably had 150 emails and calls on this, and I just want to say everybody I talked to was extremely respectful.”

Requests for comment made to Whitcher were not returned Tuesday.

A petition on change.org calling for Whitcher’s removal was created Monday night by an Olean student. It had received more than 700 signatures by Tuesday night.

“Collectively, the OHS student body has established that absolutely nothing about this behavior is acceptable, and we do not feel comfortable with this man working in a school environment that claims to be a safe and inclusive institution, free from discrimination,” the petition states. “Mr. Whitcher has already offended countless students, parents and members of the community, and if he keeps his position as the Olean Middle School principal, he will continue to do so.”

Eric Maurouard, the first to address the school board Tuesday, said he believes in the protections of the First Amendment of the Constitution and everyone has the right to practice the religion of their choosing, but the school board cannot ignore the situation with Whitcher.

“Mr. Whitcher openly stated that he and other educators have ‘infiltrated’ the school system with their religion,” Maurouard said, referring to one of the videos posted on Facebook. “That cannot happen in a public school.”

Sean Obergfell, pastor of the Believers Chapel in Olean, said a group of people taking offense over what Whitcher said in Whitcher’s place of worship is what caused so many to attend the school board meeting.

Obergfell said the incident has nothing to do with the LGBTQ community or people wearing t-shirts calling for no hate in schools. He said it’s about exercising freedom, and wondered if the school board would take action against other district employees if they exercise their religious beliefs.

“This is a very diverse community, and you have a very diverse staff,” he said. “Mr. Whitcher did not come to show hate in this school. That’s not true.”

Timothy Sherlock said the issue is a question of equality, what is equitable and fair and claimed the school board has been lacking the understanding of it for over a decade.

Sherlock said that Whitcher had done well for his family and kept his job and his religious beliefs separate until now. Sherlock questioned how a student could come to Whitcher and feel safe in terms of sexual orientation or being accepted in general.

“I went to this school myself and know what it was like to be gay in this school and not accepted, and here I am 20 years later still arguing it,” he said. “What I cannot stand by and allow is for this school board and this school system to move so far away from the ideals of humanity that we get to be where we are.”

Leo Wolters-Tejera, a Christian minister who identifies as transgender and has a child who attends the district, said the issue is not about religion or an individual but a problem with the school district concerning the protection of students.

Wolters-Tejera said he received calls from several students in recent days following the videos’ posting, reassuring them that they are not flawed and do belong in the community.

“This is not about freedom of religion and this is not about Joel Whitcher,” Wolters-Tejera said. “What it is about is a school system that has failed to put safeguards in place for its children.”

Speaking with the Olean Times Herald after the meeting, Moore said he was unable to comment specifically on Whitcher’s situation because it is a personnel matter, but said the district had received a lot of calls of concern about the incident.

“We do believe that we can come to an agreement,” he said. “I think it’s going to be a happy ending actually.”

Moore said there is a lot of diversity in the school district and among the students and school operations run well day-to-day.

“Unfortunately this happened off of campus and then it came onto campus,” he added. “We have a great board and we will resolve it.”

Live stream videos of Fresh Fire Worship Center have been posted at https://www.youtube.com/c/FreshFireWorshipCenter

In June 2018, an Olean school Title IX compliance officer’s comment about a kid-friendly drag queen party led to questions about whether she can fairly review complaints of gender- and sexual orientation-based harassment.

An organized group of about 25 community members attended a tense Board of Education meeting June 27 looking for answers about what they perceive as an anti-LGBTQ comment made by the Facebook account of the former OCSD Director of Special Education.

In another user’s public post about a June 20 event in which a drag queen read books to children at the Olean Public Library, the former administrator’s account commented that “gender identity issues are directly from Satan” and that children “should not be exposed to that at such a young age.”

The administrator was ultimately removed from the post of Title IX compliance officer, to whom claims of harassment should be brought.