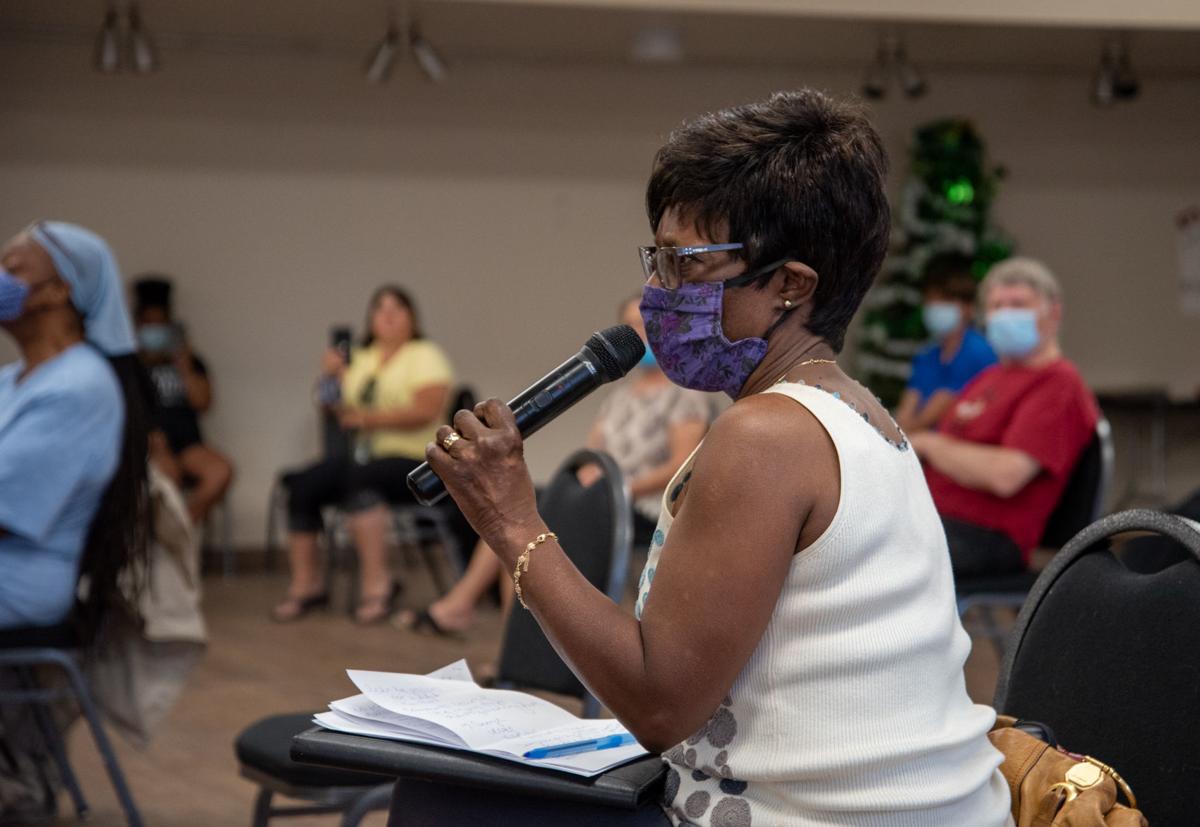 Sharlene Daniels of Olean speaks during a town hall meeting on Tuesday on race and policing in the city. 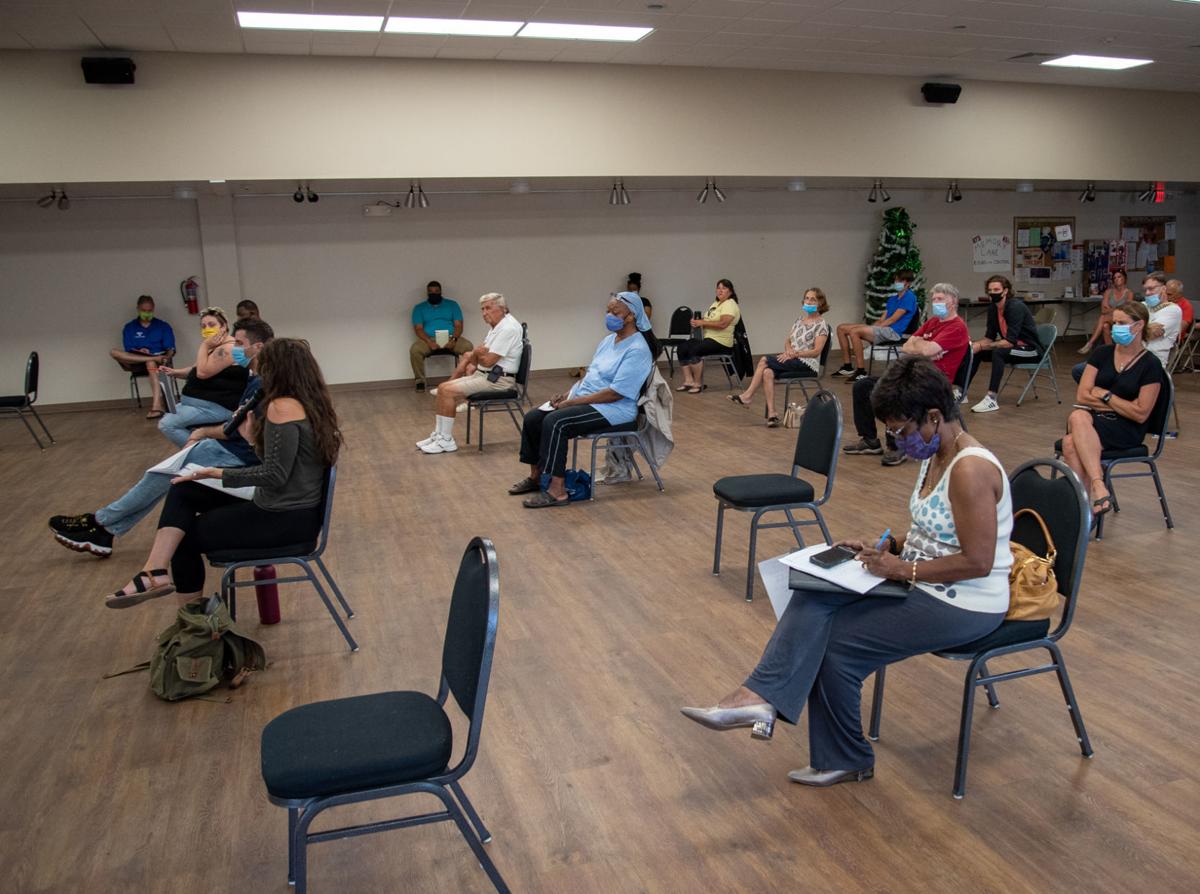 Attendees socially distance during a town hall-style meeting on race and policing on Tuesday at the John J. Ash Community Center. 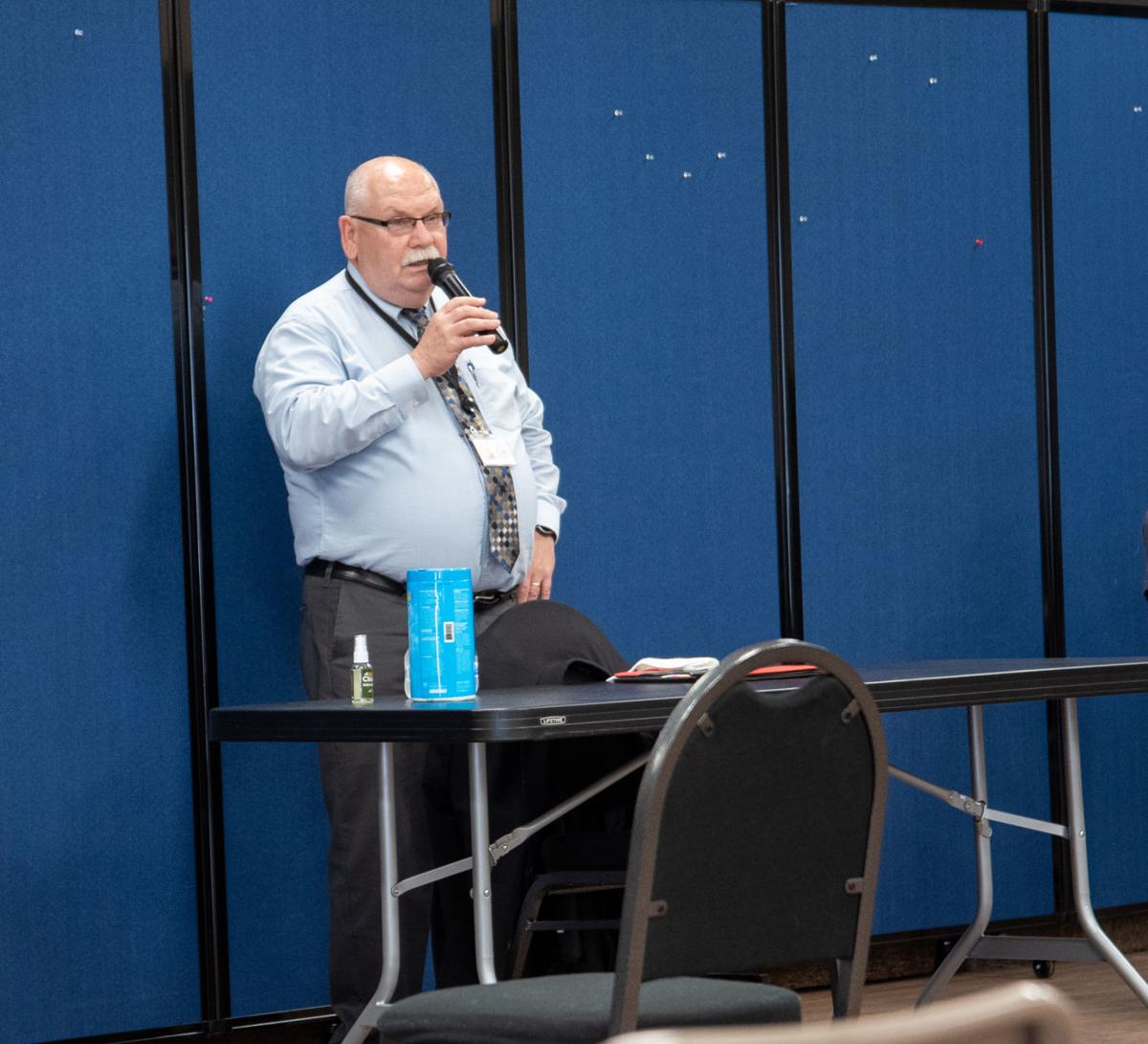 Olean Mayor Bill Aiello speaks during a town hall-style meeting on race and policing on Tuesday.

Sharlene Daniels of Olean speaks during a town hall meeting on Tuesday on race and policing in the city.

Attendees socially distance during a town hall-style meeting on race and policing on Tuesday at the John J. Ash Community Center.

Olean Mayor Bill Aiello speaks during a town hall-style meeting on race and policing on Tuesday.

OLEAN — Making government more involved in — and better reflecting — the community were just some of the ideas voiced to city leaders on Tuesday.

Calls for more community involvement in policing were one of the issues repeatedly brought up by speakers at the meeting — around two dozen in total at the John J. Ash Community Center — addressing Common Council and Mayor Bill Aiello during a town hall-style meeting.

Aiello called the meeting — the first of three — following a council meeting the week before when several residents voiced concerns over racism and policing in the community.

“I could hear a lot of things — that Olean has problems,” the mayor said, opening the floor to comments. “Let us know if we need to take a hard look.”

With attendance capped at 50 due to COVID-19 restrictions, Aiello noted that first priority was given to city residents, with those from surrounding towns let in later as space allowed.

Mickey George presented a list from Campaign Zero, a nonprofit focusing on reducing police deaths of civilians, as a starting point for discussion. Some suggestions included ending the “broken window” method of policing, which is targeting low-level offenses in hopes of stopping bigger crimes, as well as limiting use of force by police, demilitarization, ending for-profit policing and implementing new policies on training and body-camera usage.

Aiello noted there have been some changes in the department to address some of the issues.

“Every one of our patrol officers now has a body camera,” Aiello said, with some attendees offering applause.

Justice Peterson said that a major problem is a lack of openness between neighbors, as well as escalation of concerns to police action when a simple discussion could handle the problem.

“When did we hit the point where neighbors are afraid to contact their neighbors?” he said, instead relying on police to handle small issues like noise complaints or children out too late. “Why are we so afraid to speak to our fellow Americans?”

He said that, as a former police officer and a Black Oleander, he feels that community policing is vital to improving police-public relations.

“We used to have a very strong community policing,” Aiello said, noting his 32 years as a city cop and youth officer. “We kind of got away from dedication to that.”

Noting that officers still engage in those activities to get involved, “we need to get back to more of that,” he added.

Several residents asked to get police involved in the discussions at the next town halls — something the mayor said he would do, but noted that he did not invite police leadership to the first meeting “to not put on a show of force” and to allay any potential concerns over intimidation.

Charlene Daniels said that, after returning to the area after a number of years, “I didn’t feel like I was treated very well… this place I grew up in was not what I thought it was.”

Daniels, who is Black, agreed with other speakers that public art projects like murals, pushing for more minorities to get involved in Civil Service and cracking down on blighted properties could help build up community pride and help mend racial tensions, but she also said action is necessary in the long term.

Zakaria: This is the 1 thing the US got right

“I hope that we walk the talk,” she said.

Victoria Swier recommended a panel including non-police members to review any incidents of possible police brutality and impropriety.

“Sometimes, unfortunately, people go through certain arrests, and it comes down to, ‘he said, she said,’” she commented, adding that the panel should act “as a jury before the jury” to review footage, reports and testimony.

“If the need is there, and the community wants a review board, I’m not opposed to that,” Aiello said, declining to make a decision at the meeting before the next town halls and getting “to look at all the information and make decisions based on that.”

Swier also noted there have been efforts at rallies looking for voters and political candidates.

“We are working to get young people and minorities more involved in politics,” she said.

“Twenty-five percent of registered voters under 45 in the city of Olean voted last year,” he said. “You want to hold us accountable? You go vote.

“I’m really glad to see all of this,” he continued, but noted “anger, frustration, sadness — those are short-term things. I want to see this turn into active change.”

Along with political postings, the topic of minority representation in city government was broached.

Several residents recommended reaching out to the schools to educate students on Civil Service opportunities, which are mostly relatively well-paying jobs with many benefits.

Aiello noted that while the city does not have a policy in place to select minority candidates over others, he said the top three passing scores on a Civil Service test will get the candidates in the door for an interview. He added that city fire and police personnel have done some recruiting to encourage residents to take the tests, and noted that anyone interested in taking the test visit the Cattaraugus County Civil Service website at www.cattco.org/human-resources/jobs.