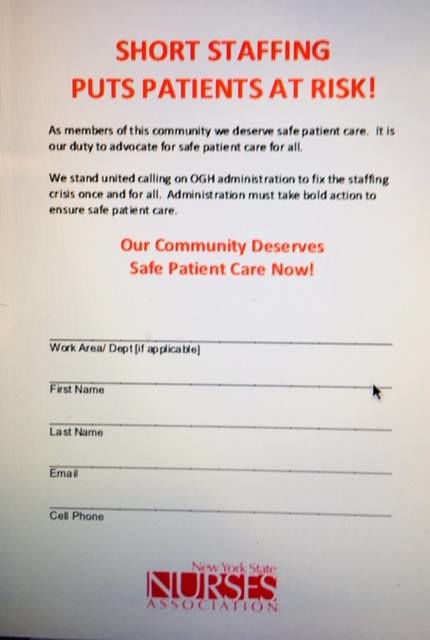 A petition being circulated by the Olean chapter of the New York State Nurses Association is demanding Olean General Hospital officials fix understaffing issues at the hospital. Hospital officials deny there’s a staffing crisis and say the petition is part of the statewide union’s larger political agenda. 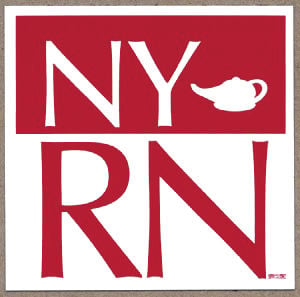 A petition being circulated by the Olean chapter of the New York State Nurses Association is demanding Olean General Hospital officials fix understaffing issues at the hospital. Hospital officials deny there’s a staffing crisis and say the petition is part of the statewide union’s larger political agenda.

OLEAN — Olean General Hospital nurses say their understaffing has reached crisis levels, while hospital officials deny such a crisis exists and say the nurses’ efforts are part of a larger political agenda.

The Olean chapter of the New York State Nurses Association, which represents approximately 200 registered nurses at OGH, announced this week it is circulating a petition demanding the OGH administration “fix the staffing crisis once and for all.”

The petition, which is seeking the signatures of both OGH employees and community members, states “short staffing puts patients at risk” and the administration “must take bold action to ensure safe patient care.”

“The problem is very real and very disturbing: there are not enough nurses to give patients the care they need and deserve,” OGH RN Trevor Moore said in a statement to the Olean Times Herald Wednesday on behalf of the local chapter. “I have been a nurse for 10 years, and I don’t think I have ever seen staffing levels so incredibly low.”

Moore added union members have demonstrated to management “over and over again” that RN understaffing is serious, yet recent layoffs and other job loss at the hospital are only exacerbating the “unsafe staffing.”

The petition comes just two weeks after 16 OGH employees were laid off. The cuts were part of a total of 31 layoffs between OGH and fellow Upper Allegheny Health System member hospital Bradford (Pa.) Regional Medical Center.

Hospital spokesperson Dennis McCarthy said in a statement Wednesday that while OGH nurses are taking on more patients than normal in light of more patients this winter and some isolated vacancies, “there is no staffing crisis at Olean General Hospital and there are no issues with quality and safety.”

McCarthy said the current nursing vacancy rate at OGH is 10 percent, or about 20 RN positions; the national average is 8.2 percent, according to the 2018 National Health Care Retention and RN Staffing Report by NSI Nursing Solutions Inc.

McCarthy said OGH is aggressively working with agency firms to staff vacancies and recruiting actively for nurses, adding the hospital expects to bring on a corps of 10 to 15 new nurse graduates this spring.

As for the recent layoffs, McCarthy said no bedside nursing positions were impacted. He added that of the 31 employees laid off between OGH and BRMC, 15 have applied for open positions and nine have been rehired to date.

McCarthy, who is Twin Tiers director of marketing for Kaleida Health, the parent company of Upper Allegheny, previously declined to specify which departments the impacted employees worked in.

Upper Allegheny officials have said the staff reduction, which represented about 2 percent of OGH and BRMC’s approximately 1,450 employees, was due to the hospitals’ financial performance not meeting expectations this past year.

As for the union’s petition, McCarthy said it’s “less about staffing at OGH” and “more about the start of a heavily orchestrated annual public campaign and a larger statewide union political agenda to promote the passage of staffing ratio legislation in Albany.”

NYSNA, which represents more than 42,000 nurses statewide, has for the last few years backed The Safe Staffing for Quality Care Act, which would set mandate nurse-to-patio ratios in all medical facilities in New York.

The bill has yet to pass the state Legislature.

McCarthy called the legislation “destructive,” saying it would push many New York hospitals to bankruptcy. Opponents of the bill say it would cost $3 billion to implement.

“People should not be misled by the scare tactics of a union with an agenda that is in fact a prescription for disaster,” he said.

The Olean chapter’s petition, nor its statement, mentions The Safe Staffing for Quality Care Act.

In the chapter’s statement, Moore said OGH nurses don’t have time to give patients the attention they need because they are “running from bedside to bedside.”

“Forget that we don’t have time to take a minute break because that’s not our main concern,” he said. “Our concern is we can’t give the patients the proper attention, we don’t have the appropriate number of nurses to be by their bedside, and staffing levels make it impossible to comfort and explain things to nervous family members. The situation is unacceptable and enough is enough. In 4 words: Safe staffing saves lives.”