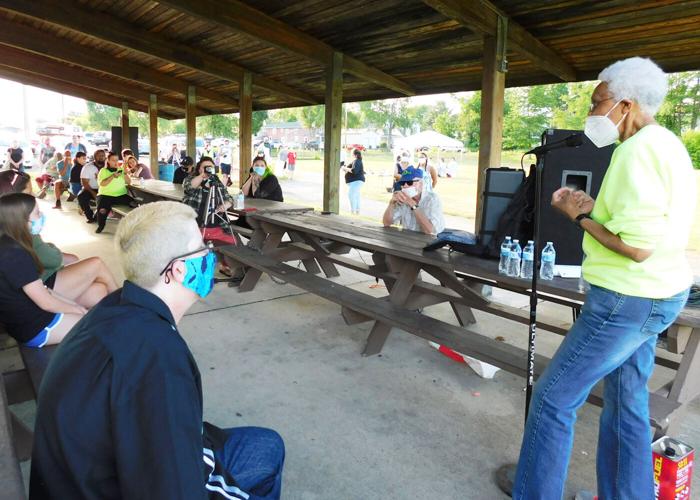 Della Moore (at right) speaks to a crowd gathered for the Juneteenth and BLM rally in 2020 at Franchot Park. 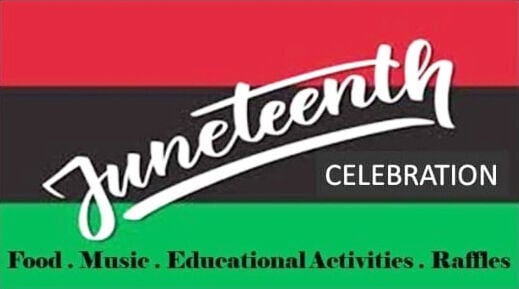 Della Moore (at right) speaks to a crowd gathered for the Juneteenth and BLM rally in 2020 at Franchot Park.

OLEAN — The Olean community is gearing up to celebrate Juneteenth this weekend to recognize June 19 as an important date in Black history — and now a national holiday.

Della Moore, founder and director of the African American Center, was elated when Danny Williams from the Colored Musicians Club & Museum of Buffalo committed to participate in Olean’s annual Juneteenth festivities.

Williams, the president of the Colored Musicians Club board, is scheduled to give a presentation on the history of African-American music at 1 p.m. on June 18 inside the Cutco Theater on JCC’s Cattaraugus County Campus. The event is free to attend and open to all.

Juneteenth, which became a New York state-recognized public holiday in 2020 and a federal holiday in 2021, has been celebrated in Olean every year since 2011.

Juneteenth comes from the day Union Gen. Gordon Granger read General Order Number 3 on June 19, 1865, in Galveston, Texas, informing residents that the Civil War had ended, and the Emancipation Proclamation, which had become official on Jan. 1, 1863, had freed all slaves.

In a presentation Tuesday at the Olean Public Library, Moore discussed with about two dozen attendees the day’s origins, its cultural impact and the celebrations that ensued.

“Why did it take two-and-a-half years?” she asked the group. “One reason is Texas was a slave state, and some people didn’t want to get rid of their slaves. They didn’t want them to know about their freedom in a lot of cases.”

Although many slaves didn’t know how to read or write, word of mouth was able to travel from the east to Texas in those 2 ½ years so some slaves knew that freedom was coming even before Granger rode in with 200 Union soldiers and the news from Washington, D.C.

“Imagine everybody standing around and waiting, and on their mind is, ‘This can’t be true. Let’s see what he says,’” Moore told the attendees. “Granger leaves, but there are soldiers still around to make sure there’s peace. The slaves go timidly at first because they never had this before, but then they find an open spot and just celebrate — and we know how to celebrate, and we still know how to celebrate to this day.”

For many years, Black communities would celebrate Juneteenth on different days other than June 19 depending on where you were or what schedules looked like, Moore explained. Texas made Juneteenth an official state holiday in 1979, but communities in nearly all 50 states had been celebrating the day for many decades prior to the national declaration in 2021.

“For instance, Buffalo sometimes had a whole week-long celebration and had Black history lessons leading right up to Juneteenth,” Moore said. “One of my biggest dreams for us to have a parade for everybody to come to.”

THANKS TO A growing relationship between the African American Center and JCC, this is the first time the Juneteenth event will be held on the college campus.

“We got together and talked about what we could do for a partnership,” Moore said. “We are already in partnership, but we want to make it so we’re active partners. We’re making it happen, and I’m so thrilled about it.”

“As neighbors to the African American Center on Barry Street, we want to collaborate with Della and her organization as much as we can,” said Paula Snyder, JCC’s Cattaraugus County Campus executive director. “Bringing Mr. Williams and the renowned Colored Musicians Club to our theater on campus is exciting. So too is the opportunity to host such an important celebration in our community.”

Paxlovid Cuts Odds for Hospitalization After Omicron Infection by 45%

Williams’ presentation is the highlight of the day.

“The idea is to keep the interest in African-American music going, where it came from, and why it’s important,” said Williams, a retired Buffalo police lieutenant who joined the club in 1982. “The club itself has been there for over 100 years. We’ve been doing the same thing for 100 years. We got started because the landscape did not allow us to earn a living. It was against the law for us to belong to the musicians’ union, and you could not work without a union card.”

Williams praised Moore for putting together the event.

“This is all done by Della,” he said. “It’s her initiative and her hard work. We just hope to add to what Della is putting together. We understand that we — by we I mean the African-American musical community — don’t have a large footprint in the Southern Tier.”

Moore said the celebration will feature exhibits, food, raffles and a drum circle. The menu will include pulled pork, hot dogs, baked beans, soda and water, snacks and strawberry shortcake and peach cobbler for dessert.

“There’s something for everybody,” she added.

Williams, who plays the trombone, baritone and cello, said that he and his peers give presentations, lectures, seminars and concerts year-round in western New York. They also teach music inside their historic building at 145 Broadway in Buffalo. Its mission is to promote research and preserve the history of African-American music.

“It’s an ongoing process, never-ending,” Williams said. “Music is our platform. Our philosophy is that every human being has a purpose in life. If you’re an electrician, a plumber, a doctor, a school bus driver, whatever, that’s your platform. What you do with it is what makes you important. What we try to do with music is to get people to understand that we’re all people. As long as you can play music, I don’t care what your color is.”

ALSO PLANNED for this weekend is the 3rd annual Juneteenth Jamboree Festival, to be held at Good Times of Olean.

Pre-sale tickets were $20. Dinners purchased on-site are $25. There is limited availability.

Then on Sunday, a Juneteenth and Father’s Day brunch and bowling tournament are planned.

The Father’s Day brunch will be served from 11 a.m. to 2 p.m. Menu includes chicken and waffles and stuffed french toast. Pre-sale tickets were sold at $15. No additional brunch will be sold on-site.

The bowling tournament starts at noon. There will be four people on a team with a $40 entry per team. The top two teams win a prize.