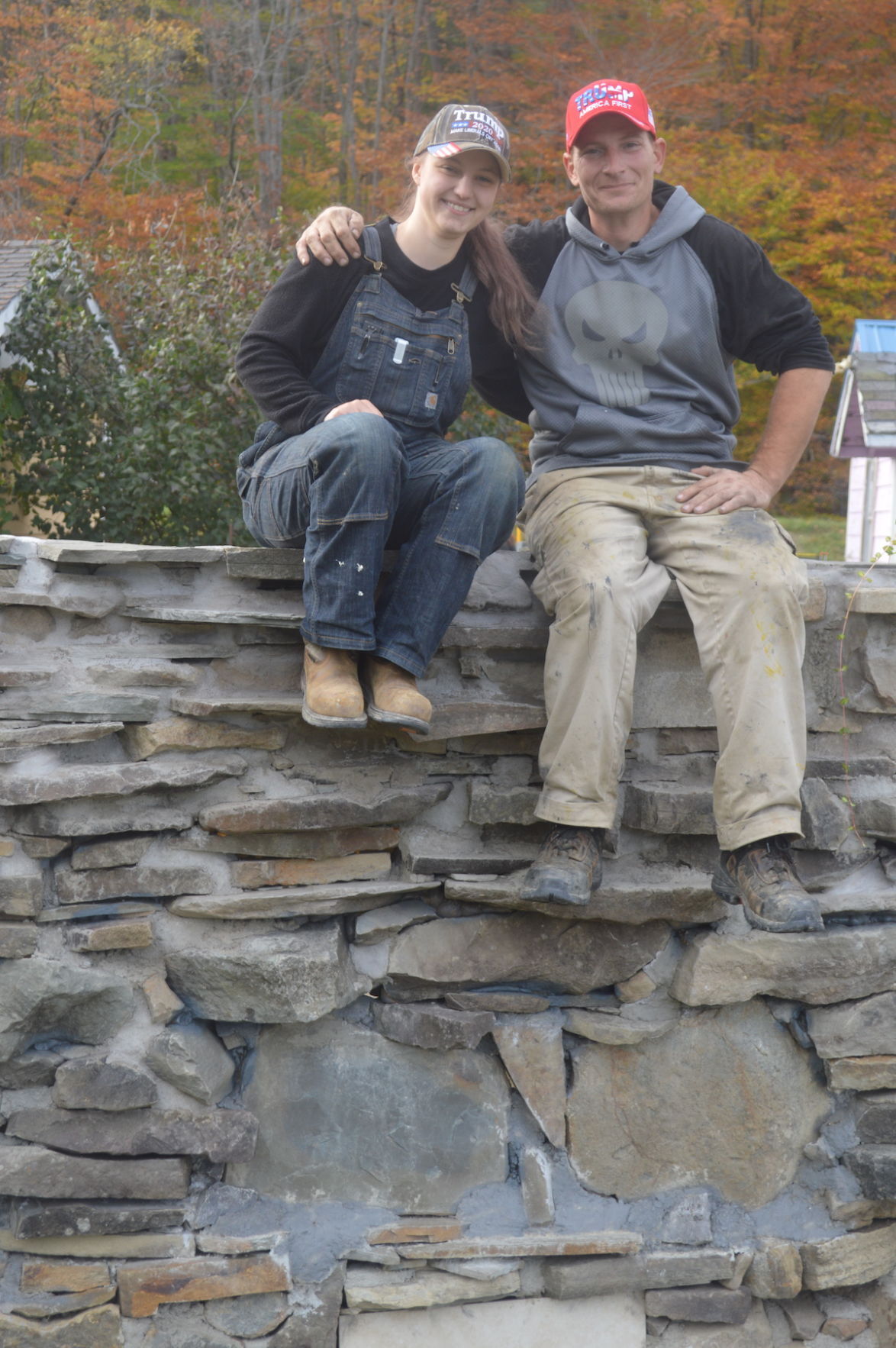 Kris Heim sits with his sister, Donnette Faulkner, on the stone wall he has been building since March. 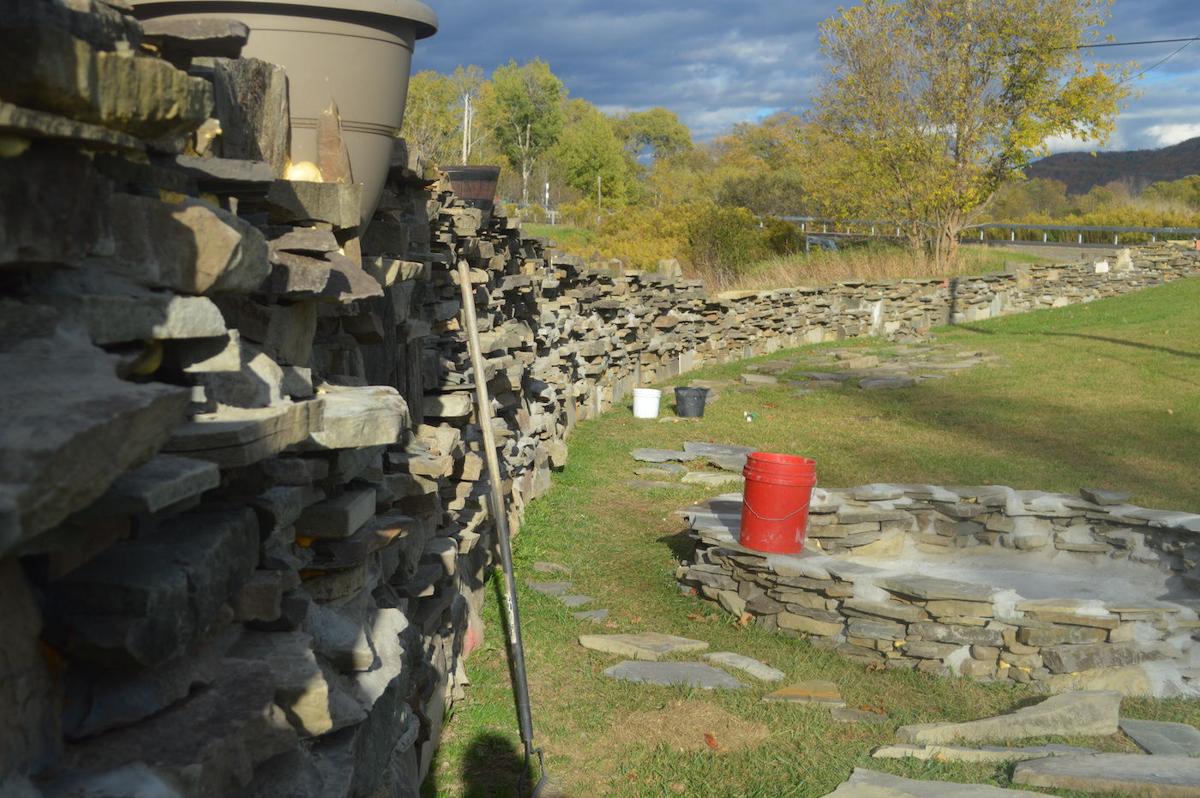 Heim is tapering his wall from 6 feet high in back to 4 feet in front to make it look level. 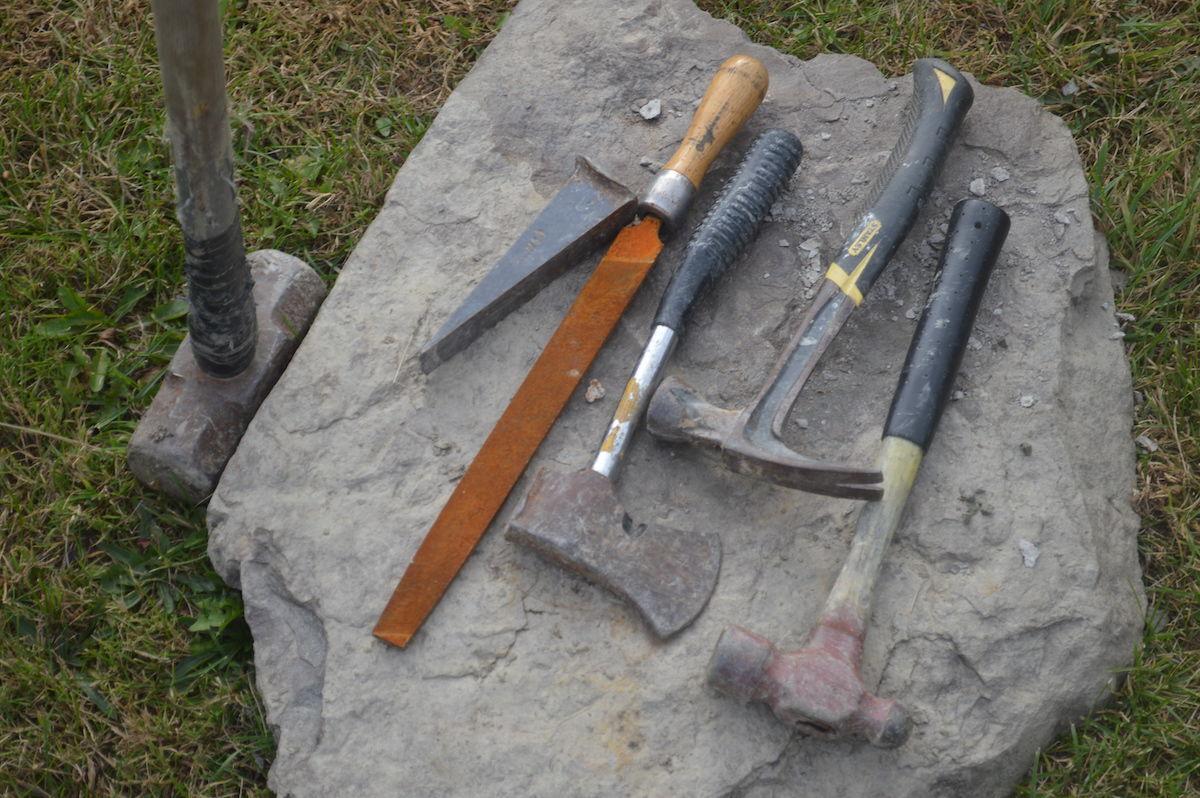 Besides brute strength, the only tools Kris Heim uses to build his rock wall are hammers and a chisel.

Kris Heim sits with his sister, Donnette Faulkner, on the stone wall he has been building since March.

Heim is tapering his wall from 6 feet high in back to 4 feet in front to make it look level.

Besides brute strength, the only tools Kris Heim uses to build his rock wall are hammers and a chisel.

WELLSVILLE — In some places you can still see the remnants of rock walks dating from the 1800s. But in Wellsville, today, you can see a new rock wall built in the old fashion.

Since mid-summer, people have been watching the progress of a rock wall as it makes a serpentine pattern around a property located on Route 417.

The property belongs to Kris Heim and it is located across the road and a few yards east of Wellsville Hardware. While the project began in March, it was not until a few months later that sharp-eyed motorists spied it.

Heim is 40 years old and a machinist at Ljungstrom Division of ARVOS, just a few yards east of his home.

He said he started the project to just build a cheap privacy fence and to protect his dogs.

“Once I got into it,” said the former AP art student, “I really started liking it and it just kind of took on a life of its own.”

When he was an art student at Wellsville High School, Heim said he won a Congressional Art Award and traveled to Washington, D.C., where it was displayed in the Capitol. After school he drifted away from art, until now.

“For the last few months people have stopped on the road and even pulled into the driveway to admire the artwork of the stone wall,” he said.

The wall stands well over 6 feet in the back and will taper to 4 feet in the front when it is completed.

“My lawn goes uphill in the front and I want the wall to look level from the front, so that is why it is taller in the back,” he explained.

In March, Heim started building a low wall behind his home. It increased in height as he built it toward a gate. From there the wall grew taller and then started to taper.

Explaining how he learned how to build the wall, Heim said, “I just started putting one rock on top of another.”

He uses concrete to make the wall stable.

Trump, Biden clash over the raging virus, climate and race

Famous protests in US history and their impacts

The flat rocks he uses have come from a variety of locations and include all different kinds of stone — in different shapes and sizes.

“I pick them up in creeks and rivers all around and I get them from falling rock zones,” he said adding that he puts them in his car because he does not have a truck.

He doesn’t weigh the stones, but says, “I think I must have moved a hundred ton of stone.”

If he finds a particular stone that he wants, he finds some way of picking it up. He also doesn’t mind trimming sharp edges off stones or even splitting big ones with a hammer and chisel.

Since July his sister, Donette Faulkner, has been helping him.

Heim said he has found that there are some benefits from lifting stones for eight months.

“It gets your mind off stuff and it relieves stress. I am in great shape now. I was beginning to put on weight, but now I’ve lost 27 to 30 pounds,” he said.

Donette agrees that building a rock wall does make you fit.

Even as the wall grows, Heim said the project has expanded. Along with the wall he has constructed a stone and concrete fire pit, and after finding a perfectly shaped stone he has decided to make a stone bench alongside the fire pit. He has also added solar lights, urns and pigeonholes to the wall, where he wants to add plants. He hopes to complete the wall before winter.

“It is a labor of love. I have become known as the Rock Wall Guy,” he added with a grin.

While Heim’s only wall-building experience is in his own backyard, he said he is for hire if someone wants a wall built.