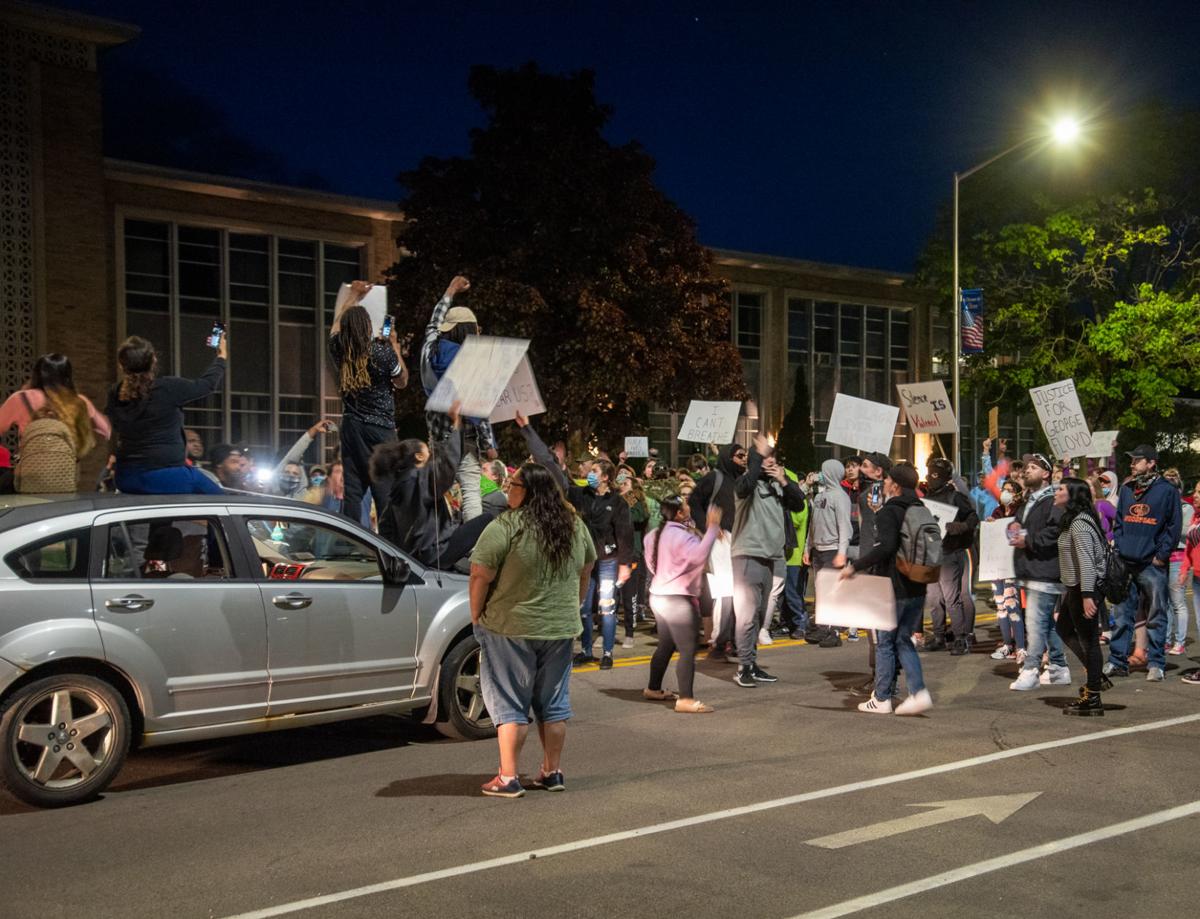 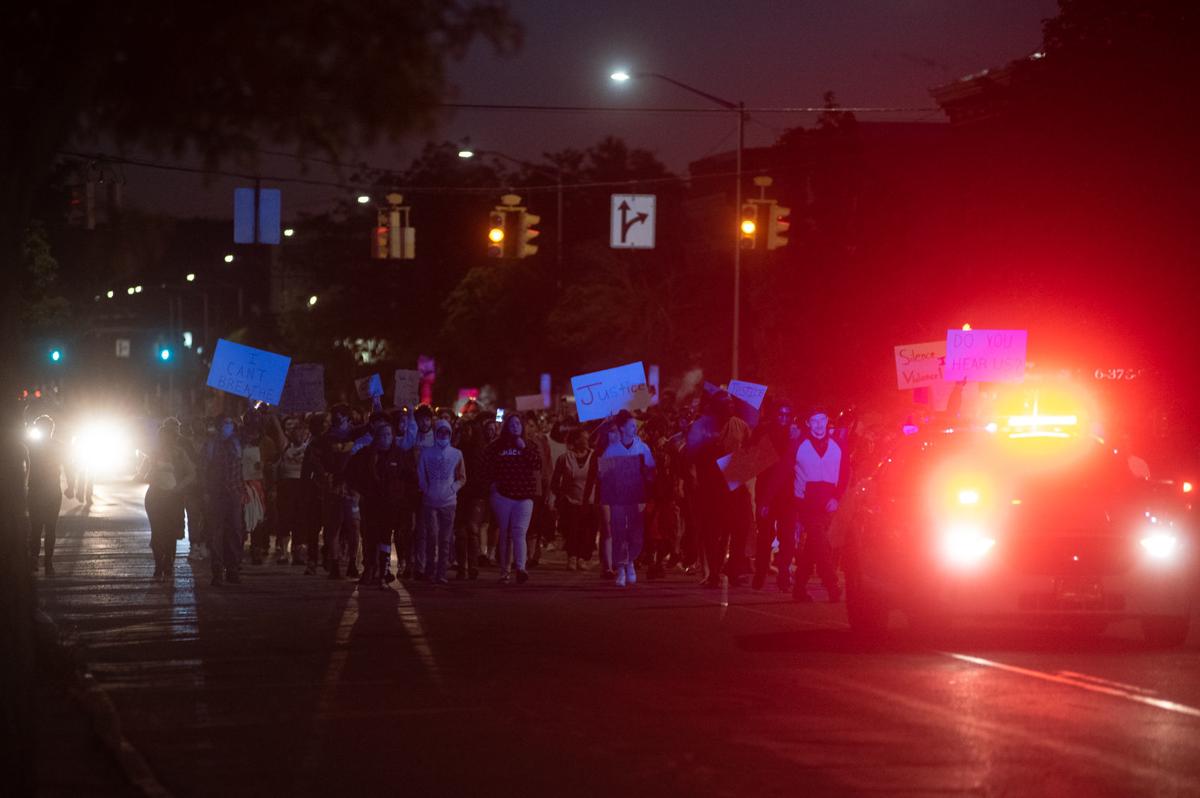 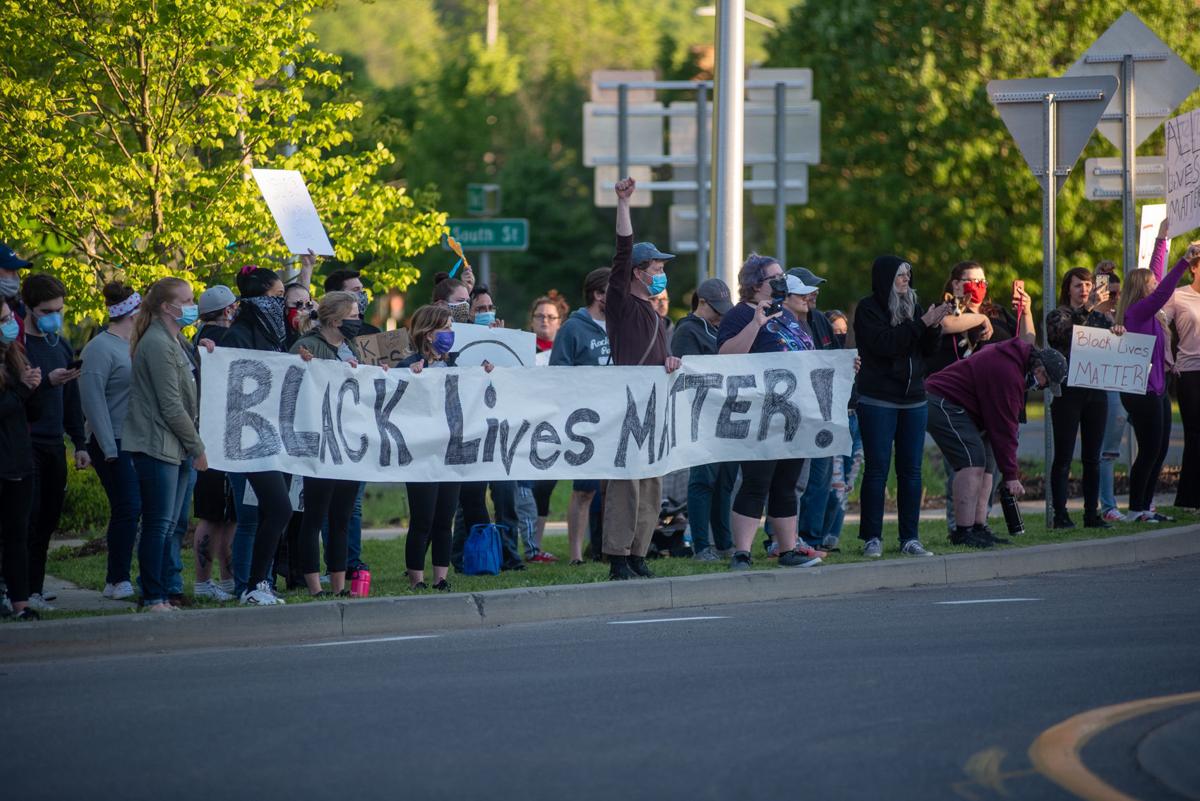 Protesters carry a “Black Lives Matter” banner and other signs at an anti-police brutality protest Sunday evening at the corner of State and Union streets in Olean. 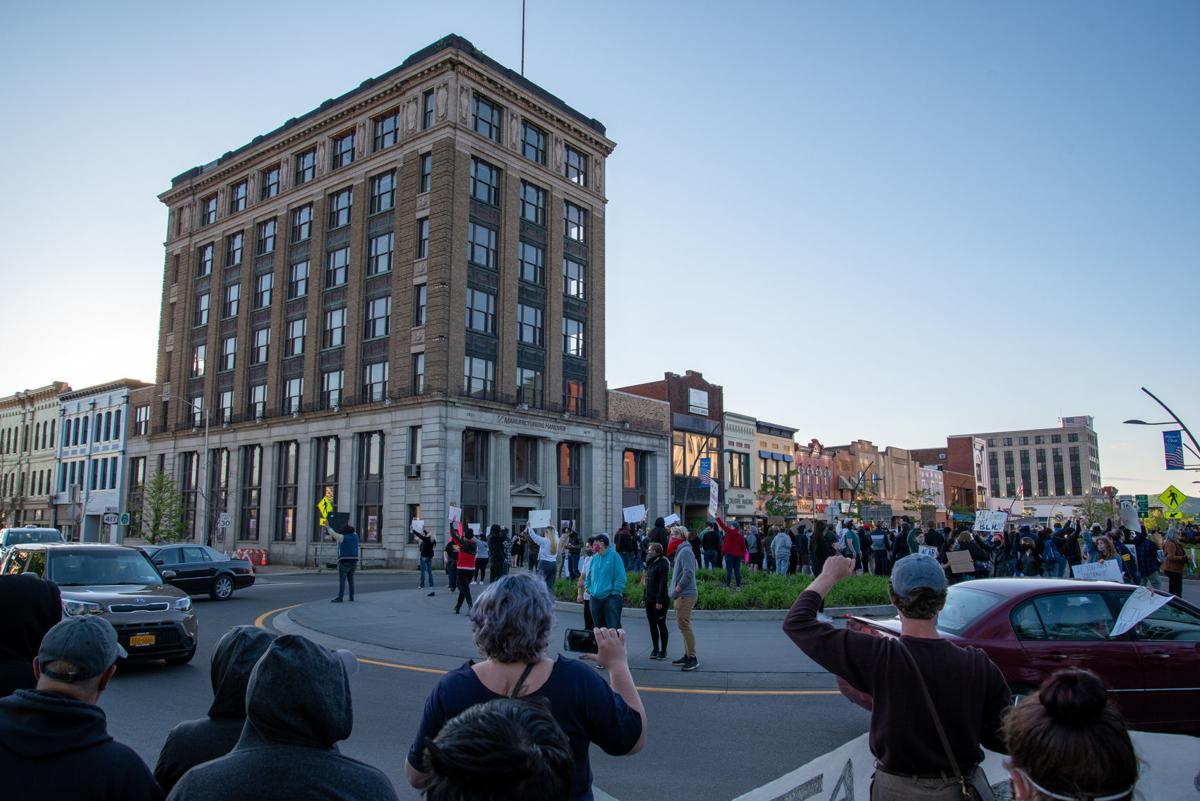 Protesters flock to the intersection of State and Union streets in Olean on Sunday afternoon.

Protesters carry a “Black Lives Matter” banner and other signs at an anti-police brutality protest Sunday evening at the corner of State and Union streets in Olean.

Protesters flock to the intersection of State and Union streets in Olean on Sunday afternoon.

An estimated 300 protesters, chanting slogans to protest the death of George Floyd in Minneapolis a week ago in a brutal police-custody incident, voiced their horror at the death and urged for reform to policing procedures.

“They need to change the whole system,” said Cori Fagan of Allegany, who was one of the first protesters to arrive at Lincoln Park, as others chanted “Black Lives Matter,” “I Can’t Breathe” and other slogans.

Noting that while the area may not have a large black population — according to the U.S. Census Bureau, black or African American residents make up less than 5% of the city’s population, compared to about 12% nationally — Fagan said it was important to voice her support.

The biggest concern was peace, however.

Jessie Selph, one of the coordinators of the protest, urged participants to stay peaceful.

City officials warned via Facebook earlier Sunday afternoon that agitators may attempt to disrupt the protest.

Before most attendees arrived, Olean Police Capt. Mark Marsfelder spoke to more than a dozen protesters.

“What I saw in that video was disgusting,” he said, referring to footage of Floyd being pinned to the pavement with a police officer’s knee on his neck, which sparked protests and rioting in cities nationwide.

“Keep it safe,” he said, urging protestors to avoid the violence associated with the protests in several cities.

Selph thanked Marsfelder and the rest of the city police for their help with the rally.

Listening to the pandemic pain, thanks to C-SPAN

Olean Police Chief Jeff Rowley reported two incidents of brief violence — the first at the corner of State and Union involving a driver stopping to have words with protesters.

“Some people came here that weren’t part of the protest, who came here to agitate or prove something,” he said, noting he and two other officers broke up the fight. “It was more of a pushing, shoving match.”

Within an hour of the start, protestors left the sides of the street and flocked to the middle of the State and Union roundabout. Eventually, police shut down traffic into the roundabout for pedestrian safety.

Later, as protesters began impromptu marches down city streets, a fight erupted after the driver of a passing vehicle got out of his Jeep and he and a few protesters quickly traded blows before other protesters broke up the fight. An ambulance was called for a head injury, Rowley said.

Police adapted quickly to the protest, allowing for a long march across the city.

Around 8 p.m., protesters began their march along West State Street, then doubled back and headed down East State, north on Front Street, then along North Union Street back to Lincoln Park.

Another march was along West State to Ninth Street, then back to North Second Street before coming back down North Union to demonstrate in front of the Olean Municipal Building. Another march continued after 10 p.m.

Rowley said he was hopeful to avoid more violence, and his officers were taking an active role.

“The one thing I didn’t want was to have a big police presence,” Rowley said, even with on-site assistance from Allegany Village Police, the Cattaraugus County Sheriff’s Office and the New York State Police, out of fear of escalating tensions.

“I didn’t want to project a militaristic, authoritarian appearance for them to focus their anger on,” Rowley said, only adding officers to the street as needed. “We’ve tried to maintain a low profile.”

And while protesters were very polite to police, he said, he understands that many are angry and sought to vent their frustrations at the rally.

“They’re all upset — and they have a right to be upset,” Rowley said. “Our whole nation is upset.”

Protest at State and Union