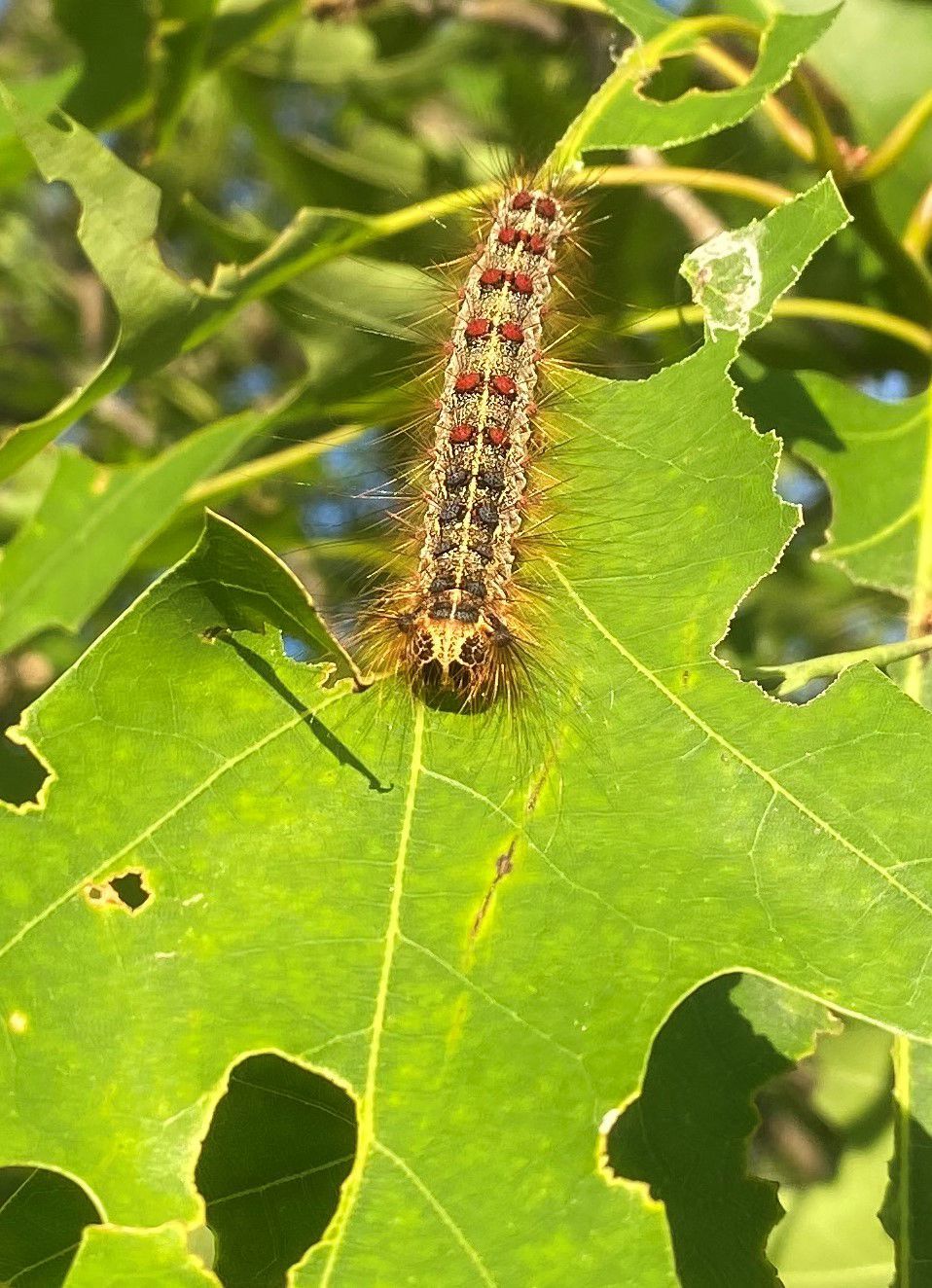 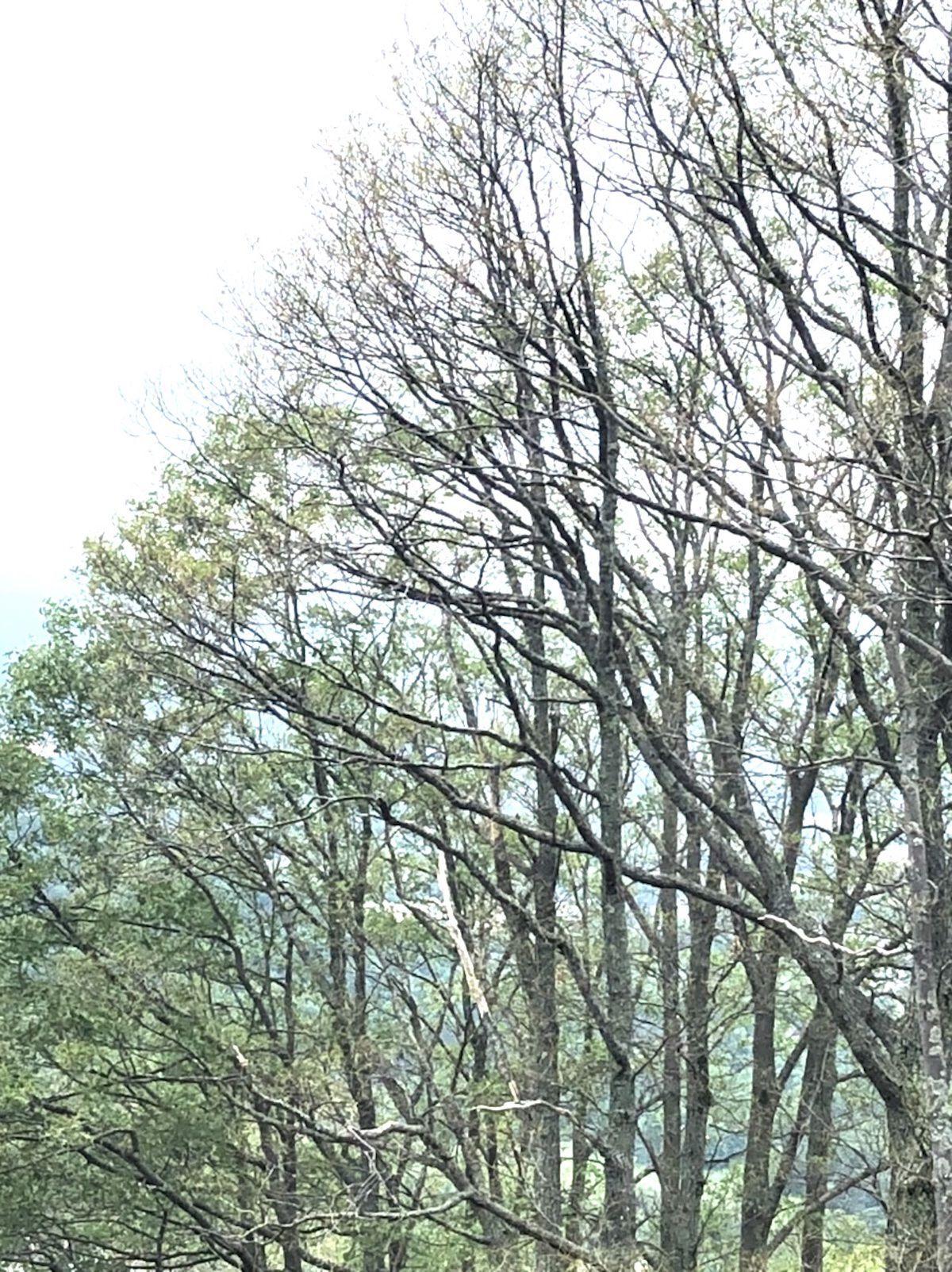 Oak trees on Mount Hermanns in Olean are nearly stripped of their leaves by gypsy moth caterpillars.

Oak trees on Mount Hermanns in Olean are nearly stripped of their leaves by gypsy moth caterpillars.

Gypsy moth caterpillars are chewing their way through forests throughout the region as significant defoliation can be found in the Olean area.

Leaf debris — particularly from oak leaves — has covered the ground in spots along the Allegheny River Valley Trail near the river and adjacent to St. Bonaventure University. High on Mount Hermanns above the City of Olean on Sunday, many oak trees were all but defoliated by the voracious chewers.

The caterpillars are particularly populous in Clinton, Warren, Saratoga, Monroe, Ontario, Seneca, Yates and Orleans counties, Rob Cole, a forester with the DEC, said last week. He said they’ve damaged a number of oak trees in those counties.

Gypsy moth populations peak every 10 to 15 years, and then boom for about two or three years, until they’re struck down by viruses and bacteria that infect the caterpillars, Cole said. He noted that New York state is only in year one of that two- to three-year cycle.

The administration of the Allegheny National Forest also reported seeing abundant populations of the invasive caterpillars — particularly across the northern half of the Bradford Ranger District, which runs along the state line shared by New York.

Gypsy moth (Lymantria dispar), an invasive species from Europe, has been in Pennsylvania since 1932 and, as Cole mentioned, is notorious for occurring in boom and bust cycles, the U.S. Forest Service said.

“When populations are high like they are this year, large quantities of foliage are consumed and complete defoliation of forested areas may occur,” ANF Silviculturist Josh Hanson said. “Most healthy trees will grow new leaves in response to the defoliation, but some trees that are already weakened by other stressors, may not withstand severe defoliation.”

Although oak trees are preferred, gypsy moth caterpillars will feed on numerous other tree and shrub species. Other species on their menu include alder, apple, aspen, maple, basswood, birches (gray, white and river) boxelder, hawthorn, larch and witch-hazel.

To limit defoliation, and the negative impacts associated with it, the Forest Service and Pennsylvania forest officials completed aerial suppression treatments across portions of seven ANF recreation areas totaling 2,850 acres.

The ANF said these treatments were part of the Bureau of Forestry’s 2021 gypsy moth suppression program that treated a total of 203,569 acres of state forests, parks and game lands across Pennsylvania.

Spray treatments are conducted in spring when the caterpillars are small and before extensive defoliation damage occurs.

The other disease is a fungus called Entomophaga maimaiga is native to Japan and was introduced to the northeastern United States in the early 1990s as a biological control for gypsy moth.

The ANF said weather plays an important role in determining how effective E. maimaiga will be. Like most fungi, the spores need moisture and high humidity to germinate. Frequent rain and warm temperatures in May and June can contribute to the fungus becoming active during gypsy moth outbreaks. Caterpillars folded in half, like an upside-down “V” are killed by the virus, those hanging head down are killed by the fungus, and caterpillars with their heads up are still alive.