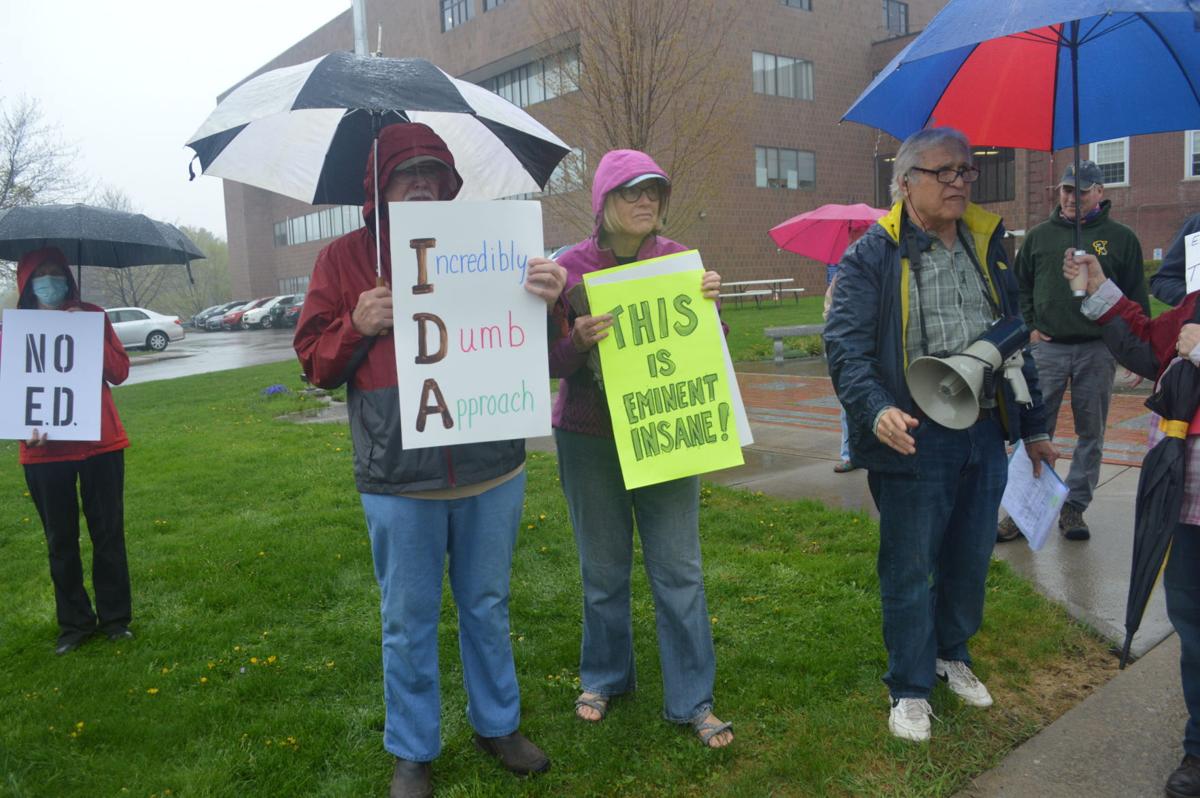 Michael and Connie Doyle hold signs during a demonstration in April in Belmont against the use of eminent domain to take farmland for a new $500 million cheese plant to be built by Great Lakes Cheese Co. 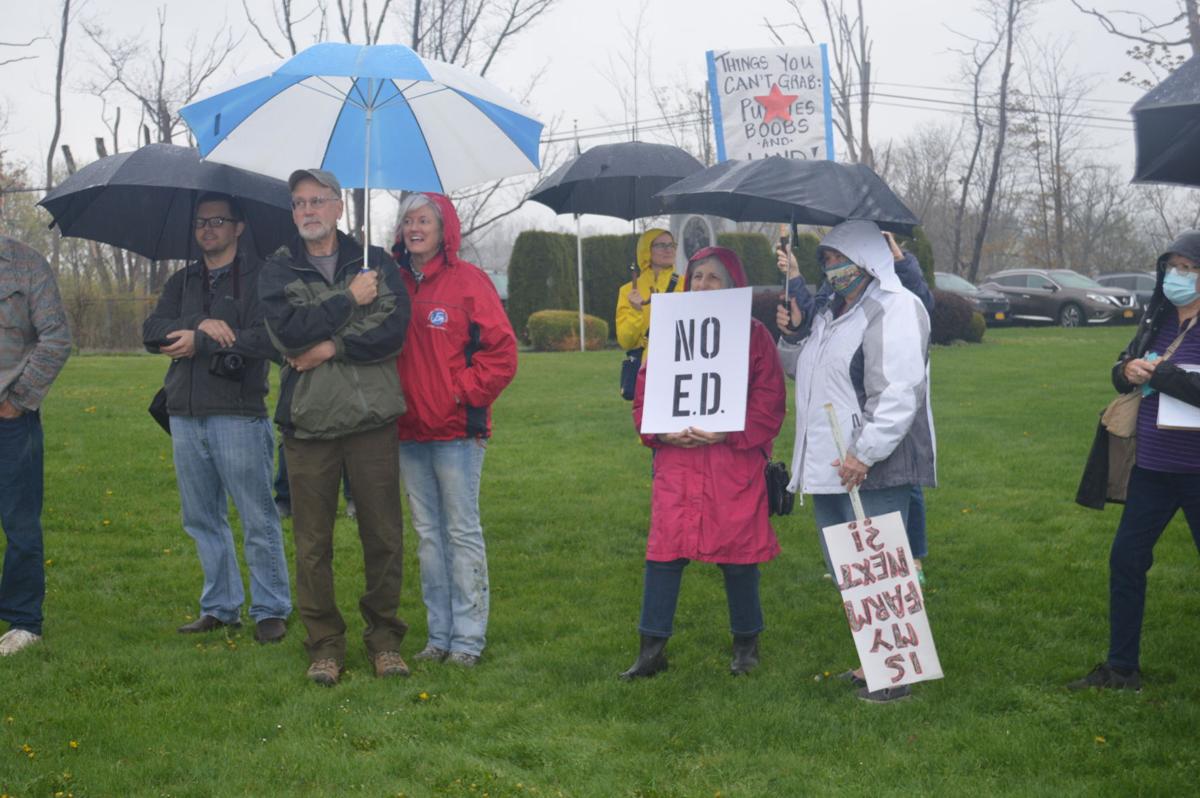 {span}Supporters of Mallards Dairy, LLC turned out in the rain Thursday.{/span}

Michael and Connie Doyle hold signs during a demonstration in April in Belmont against the use of eminent domain to take farmland for a new $500 million cheese plant to be built by Great Lakes Cheese Co.

{span}Supporters of Mallards Dairy, LLC turned out in the rain Thursday.{/span}

BELMONT — It could have been a scene from 30 years ago as people gathered on the lawn at the Allegany County Courthouse to protest governmental injustice.

Thirty years ago it was the fight against the federal and state government plan to site a nuclear waste facility in Allegany County.

On Thursday, farmers with their families and tractors and others gathered under umbrellas on the courthouse lawn as they rallied to let the County Legislature know that they aren’t happy with the proposal to take private land for economic development.

Former Fillmore teacher Roy Bielewicz organized the rally against the use of eminent domain by the county to secure nearly 229 acres from a dairy farm interest and transfer it to the Great Lakes Cheese Co. to build a $500 billion, 486,000-square-foot cheese plant in Belvidere near the Genesee River.

Bielewicz told the crowd of nearly 100 people who turned out, despite the rain, “It doesn’t matter how big your farm is. It is a matter of principal. You don’t take away a man’s small farm to give it to a billionaire.”

Sign-carrying members of the crowd cheered in agreement with him.

Bielewicz urged those in the crowd to swamp local newspapers and radio stations with letters to the editor, emails and calls about how they feel about the county Board of Legislators’ action in support of the Allegany County Industrial Development Agency’s plan.

“This is the time for new blood in the Legislature,” Bielewicz said, adding that county lawmakers are unaware of how most county residents feel about the use of eminent domain in the process. “They don’t have their finger on the pulse of the community. We have to stop this.”

Before turning the speaking over to Charlie Bares, whose Marshacres, LLC, operates Mallards Dairy, LLC, of Ellicottville and owns the farmland in question, Bielewicz pointed out, “Less than 10 minutes south of the proposed site there is more than 300 acres of fallow farmland for sale right on Route 19.”

Bares, who grows corn on the land to feed Mallards’ 3,000 dairy cattle, said, “It will greatly weaken our business if we lose that land.”

He went on to tell the crowd, “I’m more than a farmer. I’m an American and this kind of thing isn’t supposed to happen in America.”

The Mallards operation employs 35 to 40 workers and produces some $11 million a year in dairy products. The land is assessed at $189,500.

Grammy® Award Winning and Multi-Platinum Artist Ariana Grande Enters the Clean Beauty Category with the Launch of God is a Woman, a New Fragrance Inspired by the Power of Nature

Bielewicz noted, “It is Charlie this time, but who will it be next time?” He pointed out that it might be different if the land were being taken for a public bridge or road instead of another business.

Bielewicz promised the wet crowd that there will be another rally scheduled at the courthouse, during which the county’s legislators will have to “walk the gauntlet.”

Later, Bares told reporters he first heard about the possible use of eminent domain in January after he refused a monetary offer that was far less than the land is worth.

“The land is good land,” he said. “It is good soil full of nutrients and there are no corrosive qualities. There’s a riparian buffer (along the river) that is part of New York state’s erosion-control plan. The best use of the land is for farming.”

Bares said he inferred a threat that if he didn’t sell the land would be taken by eminent domain, and he would receive much less than it is worth. Such a situation is likely, as eminent domain law requires governments to pay amounts based on appraised values for a property, while IDA officials previously said the landowner has been offered eight times the expected appraised value of the land.

“We want to keep the land, keep the business strong and make the legislature think twice about what it is doing,” he said. “We’re not against economic development. We’re for it, but I don’t think the IDA has its thumb on the pulse of the people.”

IDA officials have defended the project, noting it would secure the 225 jobs currently at Great Lakes Cheese’s Cuba facility and promising 200 additional permanent jobs immediately, as well as five years of construction jobs.

Officials have also said the company chose the site despite a six-month effort to find a location in Cuba, which came up empty due to utility, transportation and land requirements ruling out sites in the community that has hosted industrial cheese production for almost 150 years.

The IDA began the formal process in March by issuing a resolution of determination and findings condemning the farmland in the towns of Angelica and Amity for the new Great Lakes facility.

While Bares said he was thankful or the support at Thursday’s rally, he said others can show their support by going to Change.org and signing their petition against the use of eminent domain.

As of Thursday there were more then 3,200 signatures, although not all who signed are Allegany County residents.

Under the proposal, the IDA will waive property taxes for 15 years — an increase from the 10-year deals the IDA typically offers developers — as well as sales and mortgage taxes for the construction. After that period ends, the plant will be taxed at full assessed value. If the final project were to be assessed at the $500 million mark, it would generate roughly $24 million a year in property taxes. Officials report the firm could potentially see up to $360 million in tax abatements.