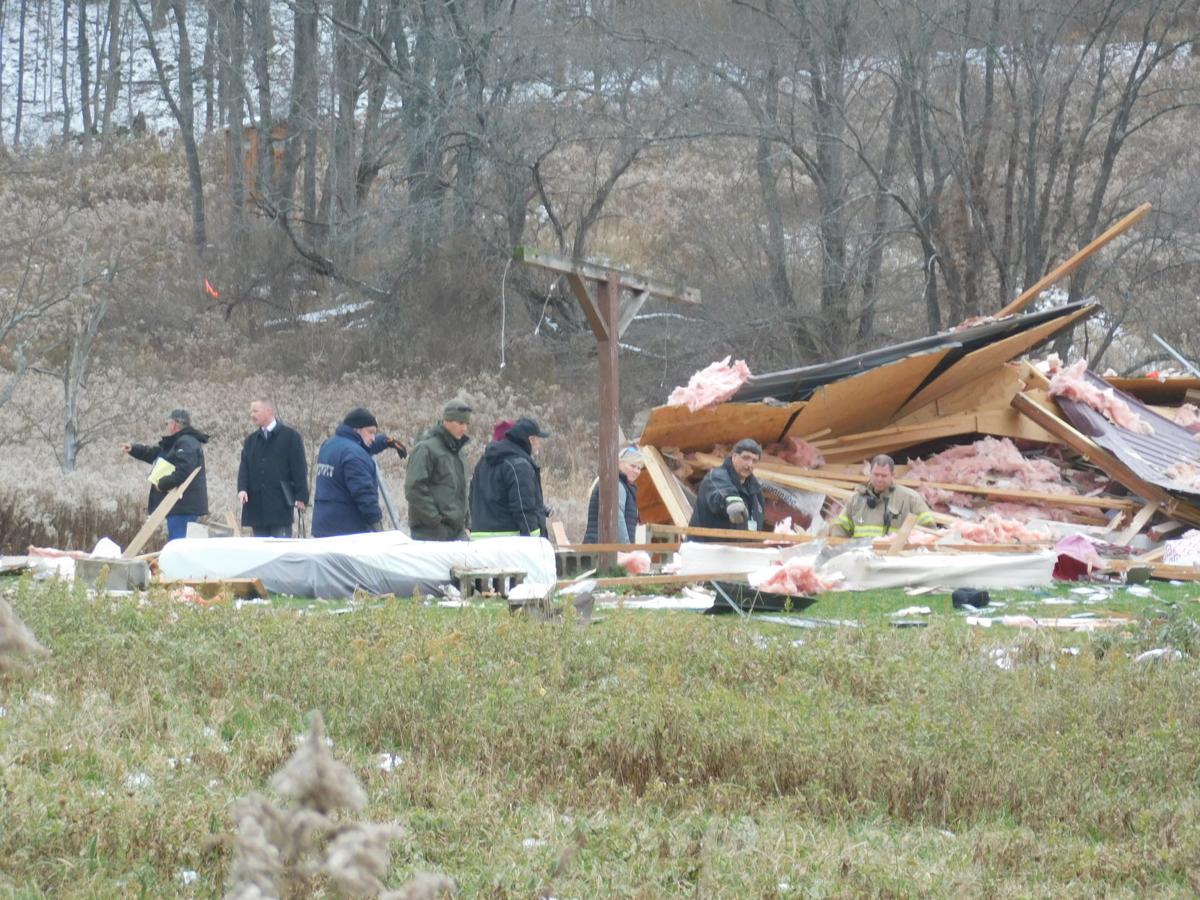 Emergency personnel and investigators walk through what is left of Betty Jo and Ronald Volz’s home, which was leveled by an explosion just before 10 a.m. Monday. No one was home and the family dog survived the blast. 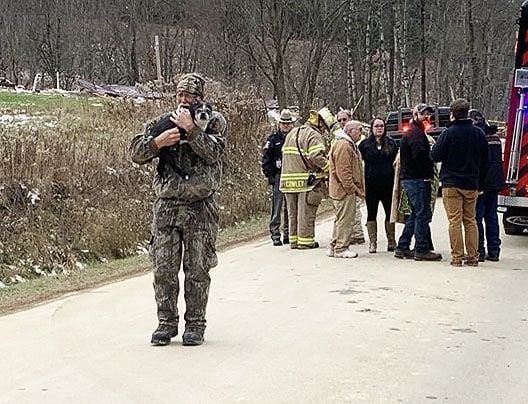 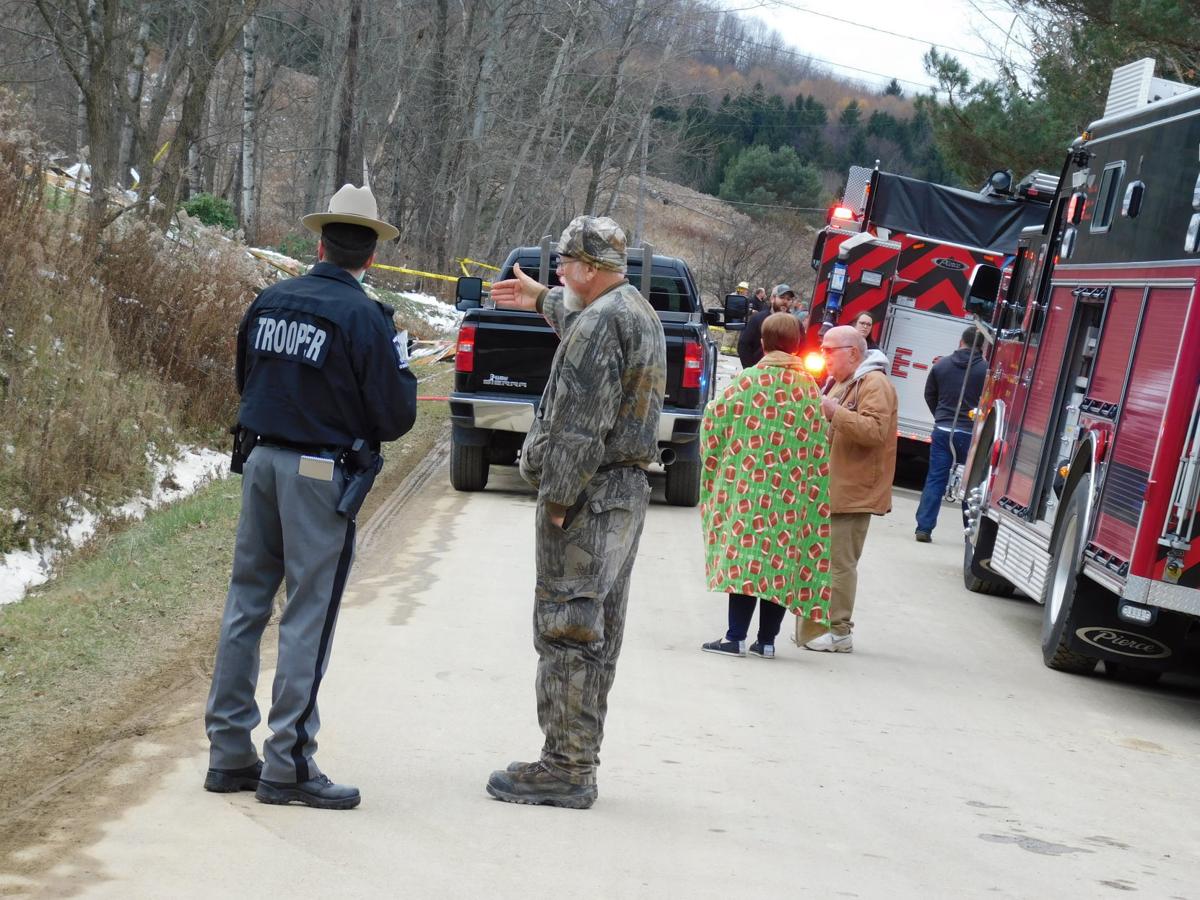 Ronald Volz (foreground in hunting clothes) speaks with a state police trooper while his wife, Betty Jo (wrapped in a blanket), speaks with someone after their house on West Branch Road in Allegany was detroyed by an explosion. 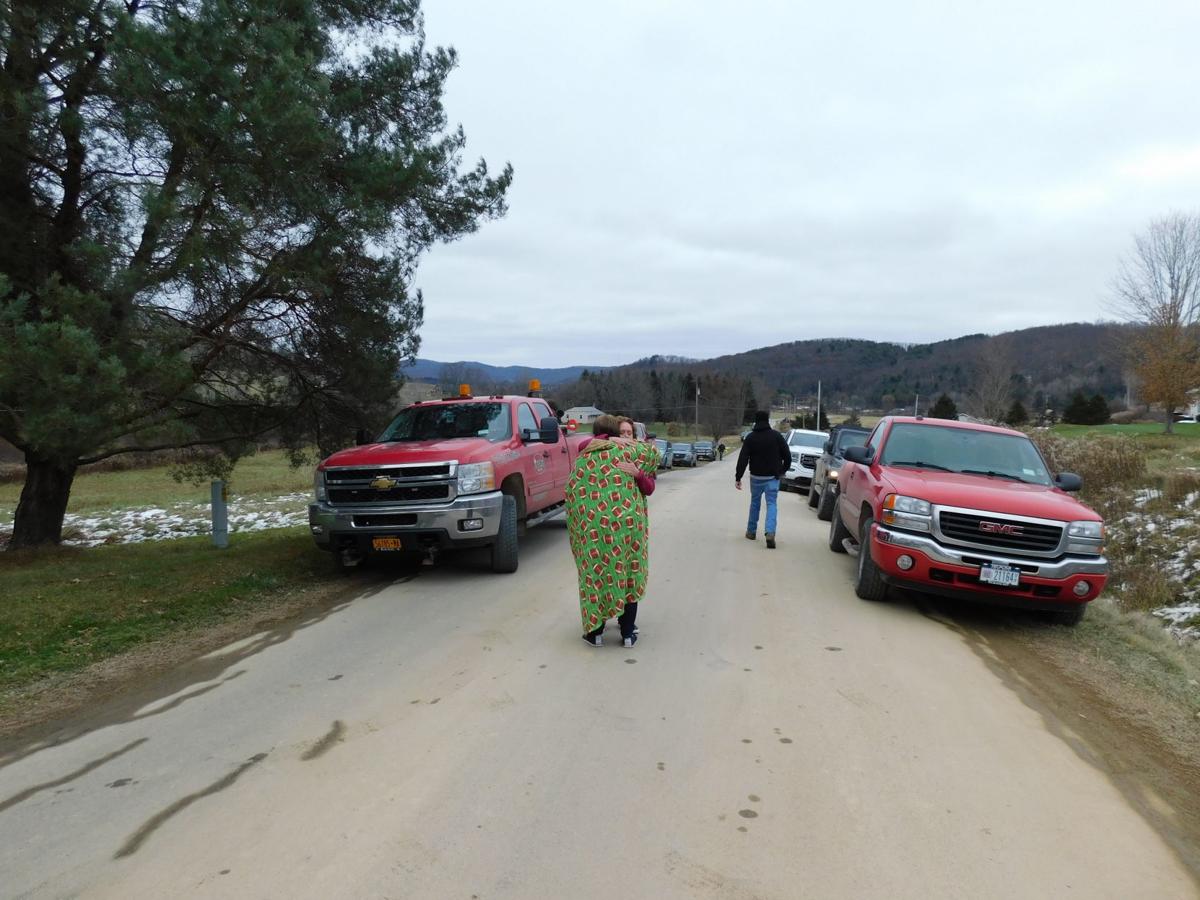 Betty Jo Volz (in blanket) gets a hug from her friend, Peggy Reitz, following the explosion of the Volz home on West Branch Road Monday.

Emergency personnel and investigators walk through what is left of Betty Jo and Ronald Volz’s home, which was leveled by an explosion just before 10 a.m. Monday. No one was home and the family dog survived the blast.

Ronald Volz (foreground in hunting clothes) speaks with a state police trooper while his wife, Betty Jo (wrapped in a blanket), speaks with someone after their house on West Branch Road in Allegany was detroyed by an explosion.

Betty Jo Volz (in blanket) gets a hug from her friend, Peggy Reitz, following the explosion of the Volz home on West Branch Road Monday.

His decision to go out on the third day of New York’s gun season for big game meant he was away from home when an explosion leveled the Volz’s house at 3699 West Branch Road at 9:43 a.m. Monday.

The blast, which was responded to by the Allegany Fire Department and other emergency crews, rocked the area and hurled debris to a nearby field and ditch in front of the home.

To the Volzes' amazement, as well as officials on the scene, the family’s Boston terrier, Hemi, which had been on a couch in the house, survived the blast. Officials found the dog at 11:42 a.m. and reunited him with his owners.

Gordon Scott, a media relations officer for the Allegany Fire Department, said officials did not yet have a comment on what caused the blast.

Ronald Volz was standing on the road late Monday morning, contemplating the destruction of his house.

“I was devastated,” he said. “I thank God that (the explosion) wasn’t during the night.”

Volz said that at the time of the explosion, he and his friend were about 10 miles away from the house. The men were hunting when Volz said he heard the explosion.

Betty Jo Volz, who works in the community, said she left her house at 7:15 a.m. to go to work, with her son and husband still at the house. She said her husband, who is retired, left about 8:15 a.m. to go hunting, and her son left as well.

“Nobody knows anything, yet,” Betty Volz added. “I got the phone call at work.”

She noted the family has a small propane tank at the back of their home that is used to heat their gas-powered kitchen stove. The rest of the home is heated by electric baseboard water heat.

Betty Jo Volz said she was trying not to think about what could have happened if her husband hadn’t left the house to hunt.

Her son and daughter-in-law, Zachary and Rachel Volz, who arrived at the scene to offer assistance to the parents, agreed. Zachary Volz shared that he didn’t know his father had left the house to go hunting when he got the initial call about the explosion, causing him to rush his parents’ property.

Betty Jo Volz said she and her husband will likely stay with their son, and expect other relatives and friends will help them, as well. The family was told they could collect personal items, such as photos and other keepsakes from the ground to store in totes brought to the scene Monday.

Greg Gilbert, owner of Gilbert’s Electrical Service who called 911 at the time of the explosion, was also at the scene.

“At about 10 this morning, I was up on the hill wiring some jacks for the oil fields, and I felt the whole ground shake,” he said. “You could feel it in your chest.”

Gilbert said that although the gun hunting season for deer and bear is on, “You could tell it wasn’t a gun.”

Ronald Volz noted that an oil company is in the process of drilling 500 wells in Allegany, some of them in direct proximity to his home.

“I thought it was one of the oil things,” he said of the blast.

The oil company Volz referred to is Dimes Energy, which has been drilling on West Branch and Four Mile roads since last spring and plans to expand the project to as many as 400 wells or more in that area, as well as on Chipmonk and Nichols Run roads.

When contacted, Matthew LeBlanc, director of operations for Dimes and a resident of Allegany, said he felt the vibrations from the explosion, too.

LeBlanc said he contacted the owners of the company and let them know they might be seeing “some fingerpointing in the next 24 hours.”

He added, “I’m anticipating that the investigation that the fire company is doing is going to turn up a gas leak or a propane leak likely in their house. I’m kind of waiting to see what happens with the investigation.”

LeBlanc said the company isn’t staging nearby production to cause migrating gas on the couple’s property.

“We’re across the street at the Putt farm,” he explained. “We’re on the same side of the street (of the Volz property) but we’re at the top of the hill.”

Other emergency agencies on the scene included the New York State Police and the Cattaraugus County Sheriff’s Office. The residential road in front of the house was closed until approximately 1 p.m.

Officials later noted there were 20 firefighters on the scene, as well as members of the Ladies’ Auxiliary, who supplied food and beverages to the volunteers. In addition, the American Red Cross was called to assist the family, as needed.