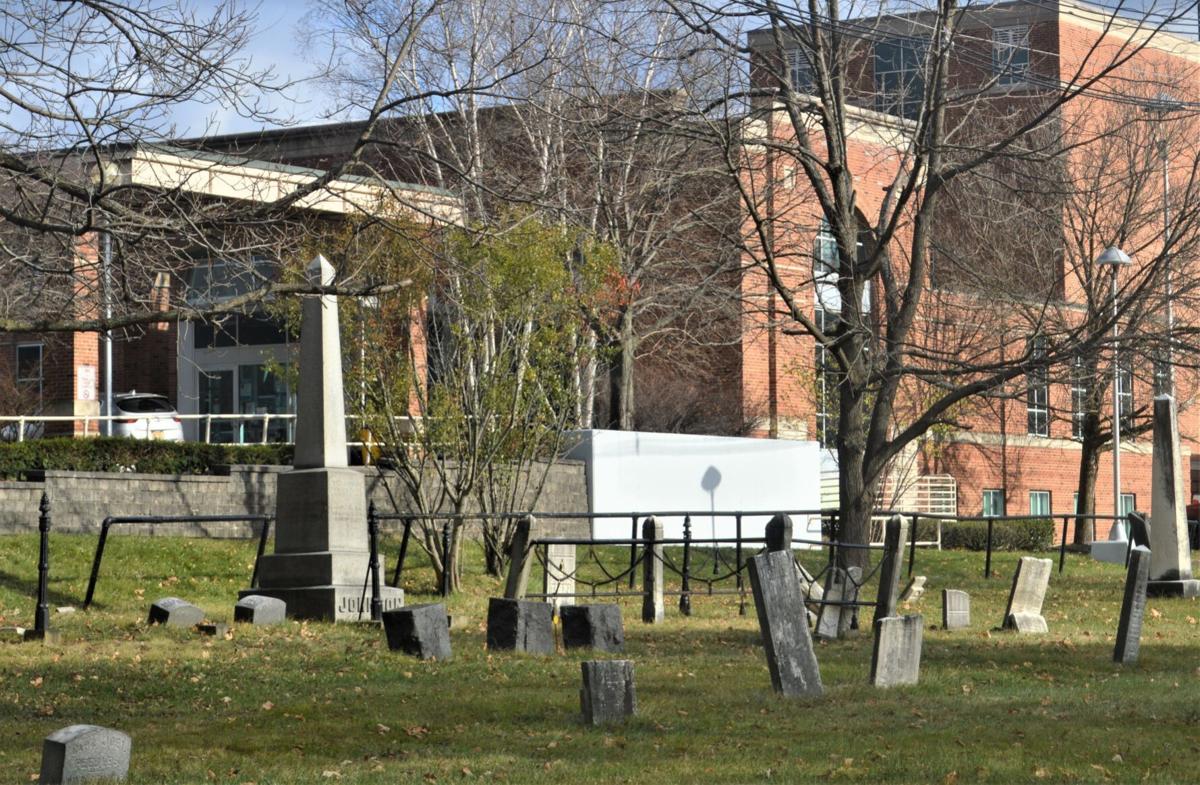 The Johnson Cemetery, created in the mid-1800s, is dwarfed by the campus of Jones Memorial Hospital. 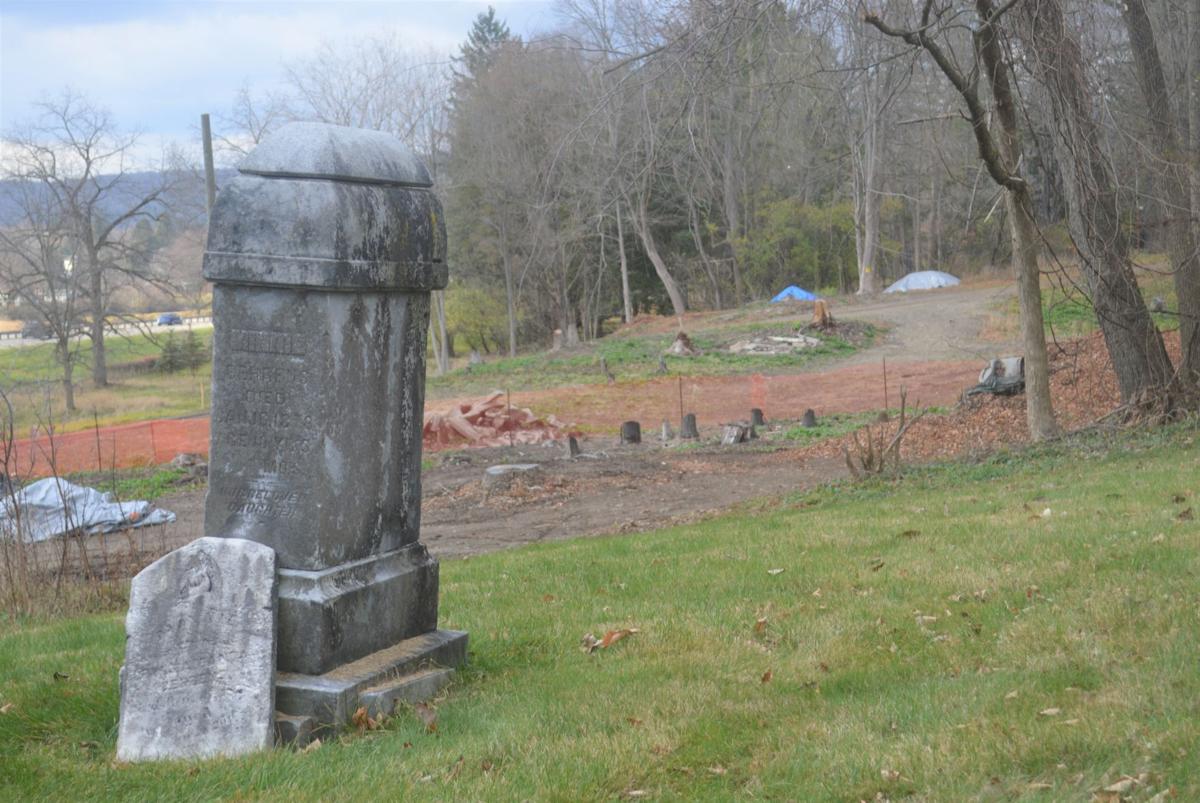 The north end of Johnson Cemetery faces the area where Jones Memorial Hospital is constructing its new parking area. 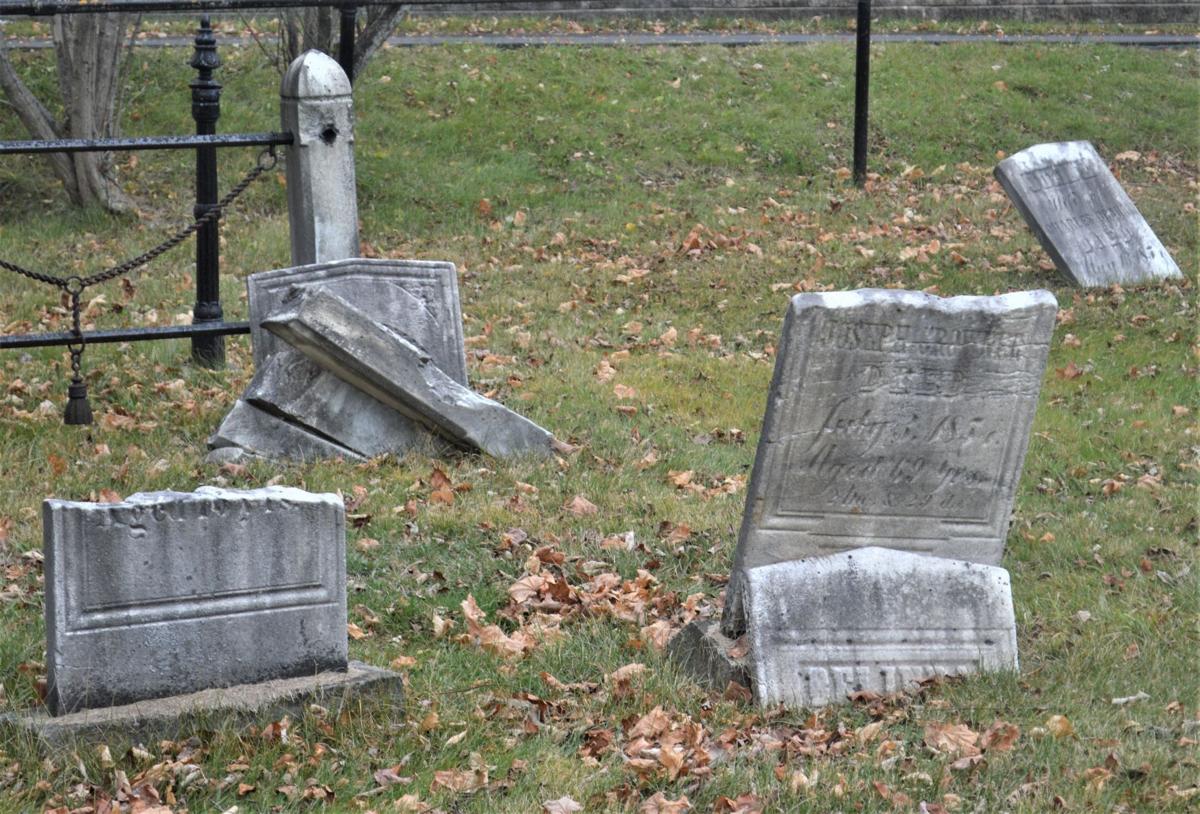 Many of the historical headstones in Johnson Cemetery are broken or on the ground.

The Johnson Cemetery, created in the mid-1800s, is dwarfed by the campus of Jones Memorial Hospital.

The north end of Johnson Cemetery faces the area where Jones Memorial Hospital is constructing its new parking area.

Many of the historical headstones in Johnson Cemetery are broken or on the ground.

WELLSVILLE — One, if not the oldest, cemetery in Wellsville, The Nathaniel Johnson Cemetery, lies in the shadow of Jones Memorial Hospital and in the village’s distant past.

However, as JMH expands its footprint with construction beginning this past fall on a new parking area, the steps being taken have brought the resting place of some of the village’s earliest citizens back into view.

The present-day JMH building is a fairly new addition to the neighborhood, built in the late 1940s and opened in the early 1950s. The cemetery was plotted 100 years earlier by Nathaniel Johnson in the late 1840s. The first burial took place there when 3-year-old Eldon Budd was laid to rest.

Johnson was an early entrepreneur, who built one of the first cabins in the village and lived there while waiting for his columned greathouse to be built. Today that Greco-style house is the home of the Veterans of Foreign Wars.

History further notes that Johnson’s land stretched to the Genesee River and that, anecdotally, he may have made a deal with the Erie Railroad to build its freight depot on his land, in exchange for a promise that passenger trains would stop daily in the village.

In 1972, Hurricane Agnes changed the complexion of the neighborhood, which is now dominated by the hospital, its parking lot and the cemetery.

Before the flooding, which collapsed part of the hospital and removed some of the land bordering the cemetery, there was a street. Genesee Street rolled past the hospital campus and led to an iron camelback bridge that crossed the river. On the tree-shaded lane there were houses on the north side before one reached the iron entrance to the cemetery.

The campus of JMH, with its entrance on a traffic circle, was across the street from the cemetery entrance. From the hospital, leading toward North Main Street, were the Lutheran Church and the Temple Theater building. The river ran past both the hospital and the cemetery.

Many of the buildings were damaged in the flooding and after a few years, the rest were torn down, allowing the hospital to rebuild and expand. Lower Genesee street faded into the past. Johnson Cemetery became an afterthought to all except those whose great, great, great kin were buried there.

Around 1984, the deed to the cemetery was conveyed to the Town of Wellsville, which under state law has been responsible for its upkeep for the last three decades.

The last known burial in the Johnson Cemetery took place in August 2007 when 101-year old George W. Brown was laid to rest.

Sometime in the 1950s, before the flood and the construction of the highway, which now runs past the hospital and the cemetery, a local author/historian, Mrs. Lewis Thornton, wrote an article on the Johnson Cemetery for the local newspaper.

The article was titled, “Nathaniel Johnson Cemetery: Interesting Part of Our History.”

“The Johnson Cemetery is across West Genesee Street from the Trinity Lutheran Church. It was laid out by Nathaniel Johnson in 1854 and the original map made at that time is in the Woodlawn Cemetery office in the Ebenezer Building. Mr. Johnson was born April 8, 1792 in Afton, Chenango County, NY. In later years he moved to Elmira and was interested in the lumber business and came here probably in the early 1840’s. He owned large tracts of lumber near here and in Pennsylvania.

“There was no real cemetery before 1854 although the Farnum Cemetery, a gift of the Farnum family, now called Woodlawn, had been used before Wellsville had a name. The infant son of Samuel Shingler was buried there in 1839. Shingler was an innkeeper.

“Mr. Johnson was a prominent member of the Congregational Church, serving on its Board of Trustees, and that may be one of the reasons he picked out the site across the street from it for the Cemetery (the Congregational Church was located there until 1870), but, the cemetery had no connection with that Church nor afterwards with the Trinity Lutheran Church. It was a private enterprise and at his death on August 18, 1874 it went to Johnson’s heirs. He is buried there, and the lot is enclosed with a beautiful iron fence as are also the lots of his brother, Seymour Johnson, and of Joseph Crowner. The latter is particularly interesting, the design being of a cord and tassels.

“There are many prominent citizens of Wellsville’s early days buried here, among them the Yorks and the Reesers. The latter were the parents of Nancy Howe, the wife of David A. Howe, to whom we owe our Library.

“Mr. Johnson left $1,000 in his will in care of the Wellsville Chapter No. 143, Royal Arch Masons, the interest thereon to be used for the maintenance of a fence around the cemetery

“For many years, the owners of lots in the cemetery kept them up but as the years went by many of them moved away or died and it became sadly neglected. In 1926 there was a movement started to clean it up and on August 30, 1926 the First Trust Company obtained the title to it from the Johnson heirs. The lots are owned by individuals.”

According to one former town official the deeds are owned in perpetuity by the descendants of the original owners.

Today Johnson Cemetery is a ghost of what it once was. A narrow lane built for carriages rather than cars weaves northward through its center, leading to an outbuilding and to the site of the new parking area.

It is blocked from view by trees and brush on its west bank and the sheer size of the Jones Memorial Hospital dwarfs the old entrance. A paved parking lot sits on the cemetery’s east side. Whether by vandalism, weather or age, many of the snowy white memorials once lovingly placed by mourners lay on the ground or have been broken.

Broken and ramshackle, the iron fence that once shielded it no longer encloses its hallowed grounds.