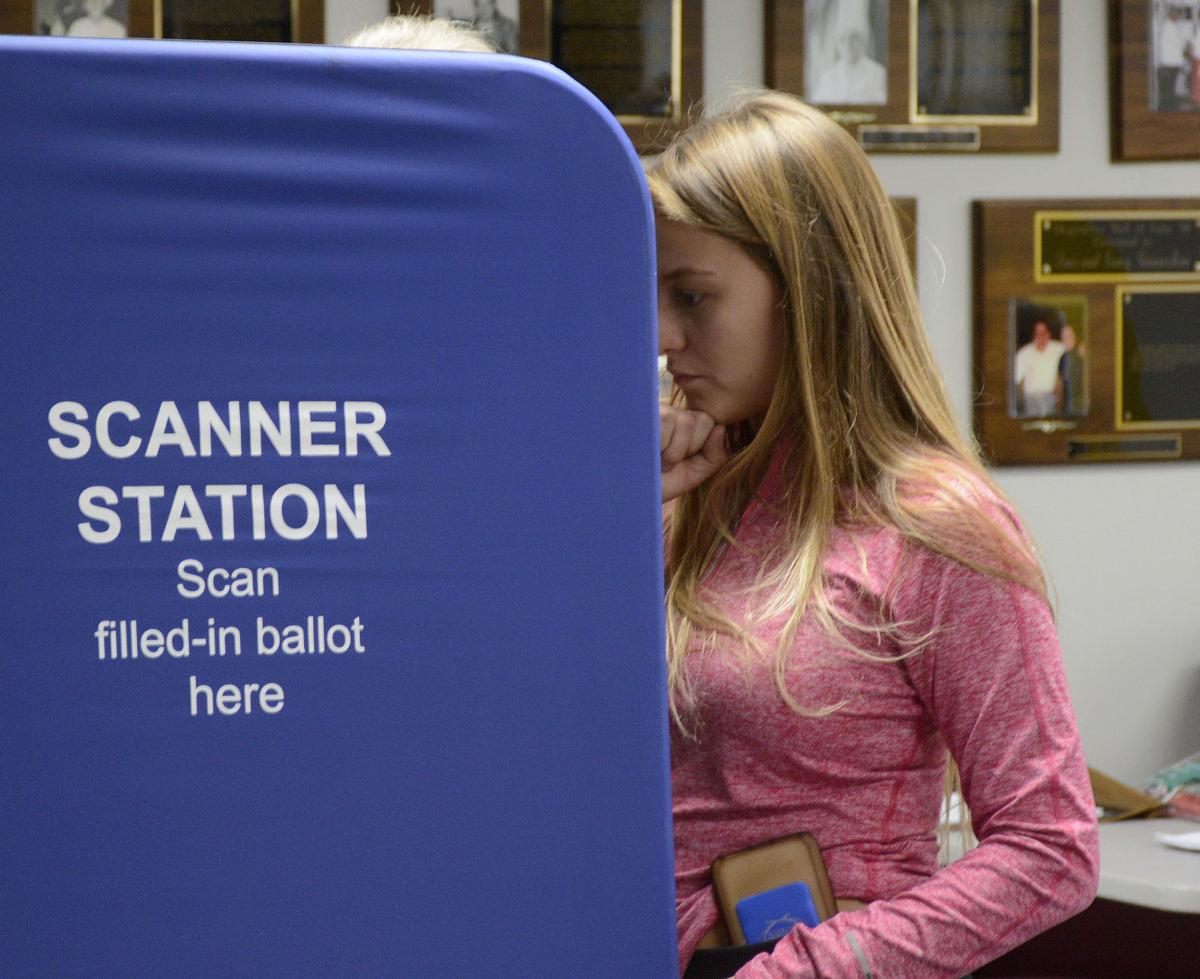 A voter casts her early ballot in October 2019 at Jamestown Community College in Olean. 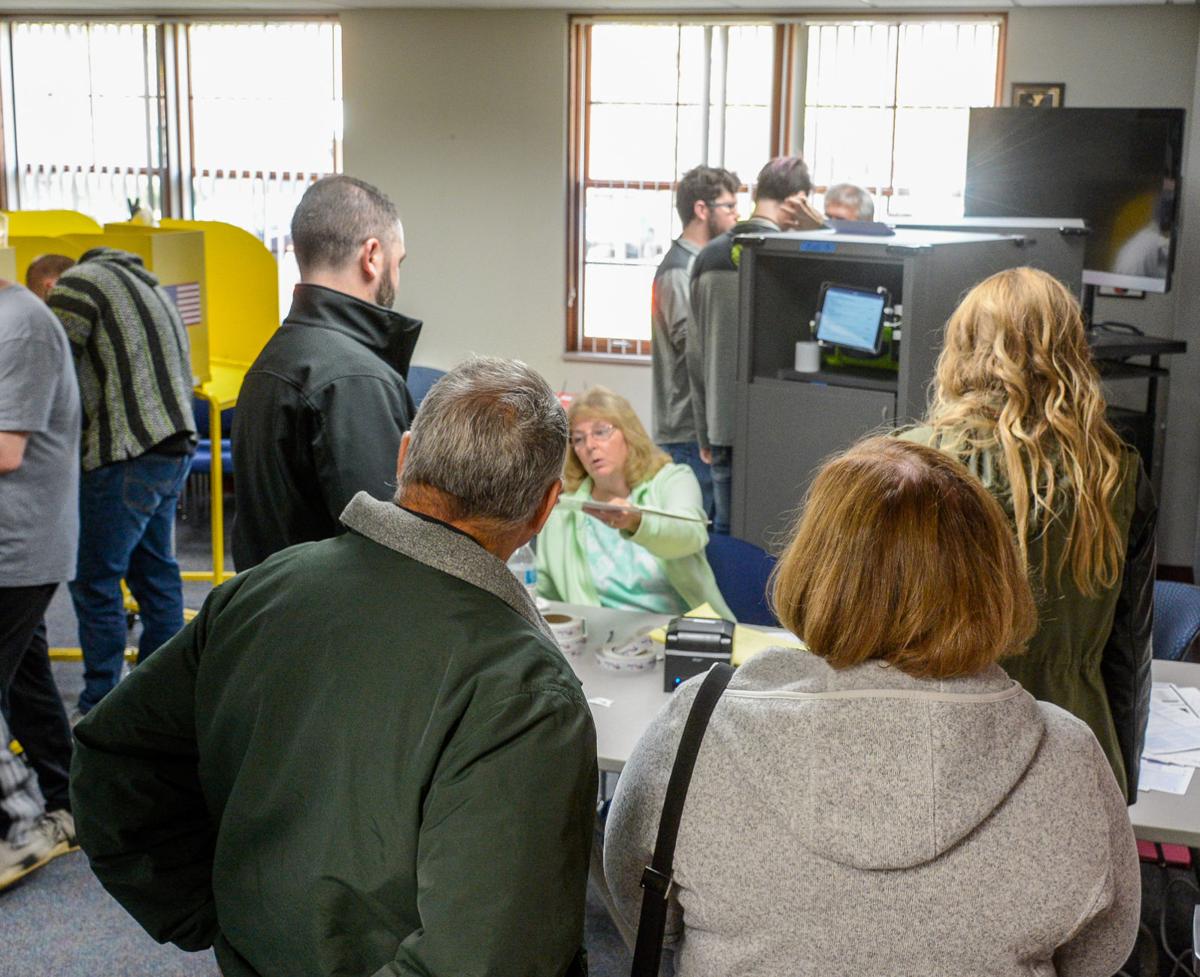 A poll worker hands off an early voting ballot to a voter on Oct. 26, 2019, at the Community Room of the College Center at the Jamestown Community College in Olean. Almost 800 voters in Cattaraugus County turned out for the first early voting days held in New York.

A voter casts her early ballot in October 2019 at Jamestown Community College in Olean.

A poll worker hands off an early voting ballot to a voter on Oct. 26, 2019, at the Community Room of the College Center at the Jamestown Community College in Olean. Almost 800 voters in Cattaraugus County turned out for the first early voting days held in New York.

Early voting for New Yorkers begins Saturday, with each county having its own set hours and sites leading up to Election Day on Nov. 3.

In Cattaraugus County, early voting will be held at two locations — at the county Board of Elections office in the former Little Valley school, and the Community Room at the JCC-Cattaraugus County Campus College Center, 260 N. Union St., Olean.

There will be no early voting Nov. 2, the day before the election, in either county.

Voters may only vote early in their home county, but residents of Cattaraugus County may vote at either station. No appointment is necessary, but under state executive order, face masks are required.

Those heading to the polls may only vote once — by voting early, voting the day of the election at their regular polling station, or by absentee ballot. Electronic poll books linking the early voting and regular voting stations will be used to prevent multiple votes, and an absentee ballot received from someone who voted in person will not be counted.

Under state law, counties must have at least one early voting station for every 50,000 voters, but counties may open more — Cattaraugus County elections officials chose to continue using two sites after trying it out in 2019, while Allegany County officials will operate just one site again this year.

WHILE ONLY IN its second year in New York, early voting turnout nationally indicates that locals may turn out for early voting at a much greater volume than recorded in 2019.

According to a report by the Washington Post, at least 42 million voters had already cast ballots by Thursday — with almost two weeks left to election day, numbers are almost the same as those who voted early in 2016.

Some states, including Texas, Michigan, Wisconsin and Minnesota, have already received more early votes than during the entire 2016 election cycle. Other states, like Pennsylvania, have noted large returns but did not have early voting options four years ago.

PostNewYorkAds.Com Reveals: How to Sell a House Fast in 2021

Officials in both counties have reported thousands of absentee ballots have been requested to date.

As of February, there were 25,169 active registered voters in Allegany County, with 12,599 Republicans, 5,667 Democrats, 4,910 independents, 1,256 Independence Party members, 447 Conservatives, 136 Working Families Party members, 94 Green Party members, 47 Libertarians and 13 were members of other parties.

New voter roll totals are scheduled to be released Nov. 1.

The deadline to apply online, postmark, email or fax a completed application or letter request for the General Election Absentee ballot is Tuesday, but voters may apply in person at their county’s board of elections office up to Nov. 2. Completed ballots must be postmarked on or before Election Day, or dropped off in person.

To apply for an absentee ballot a voter may be: