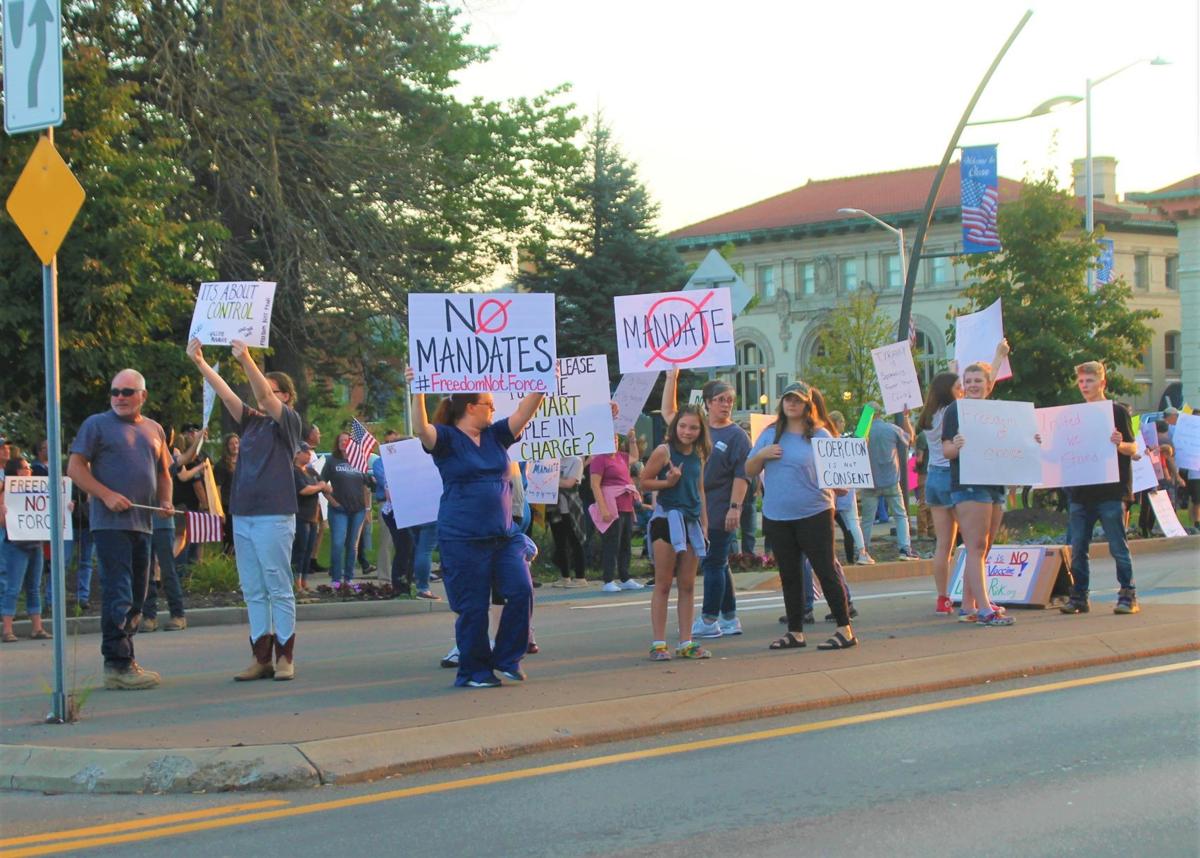 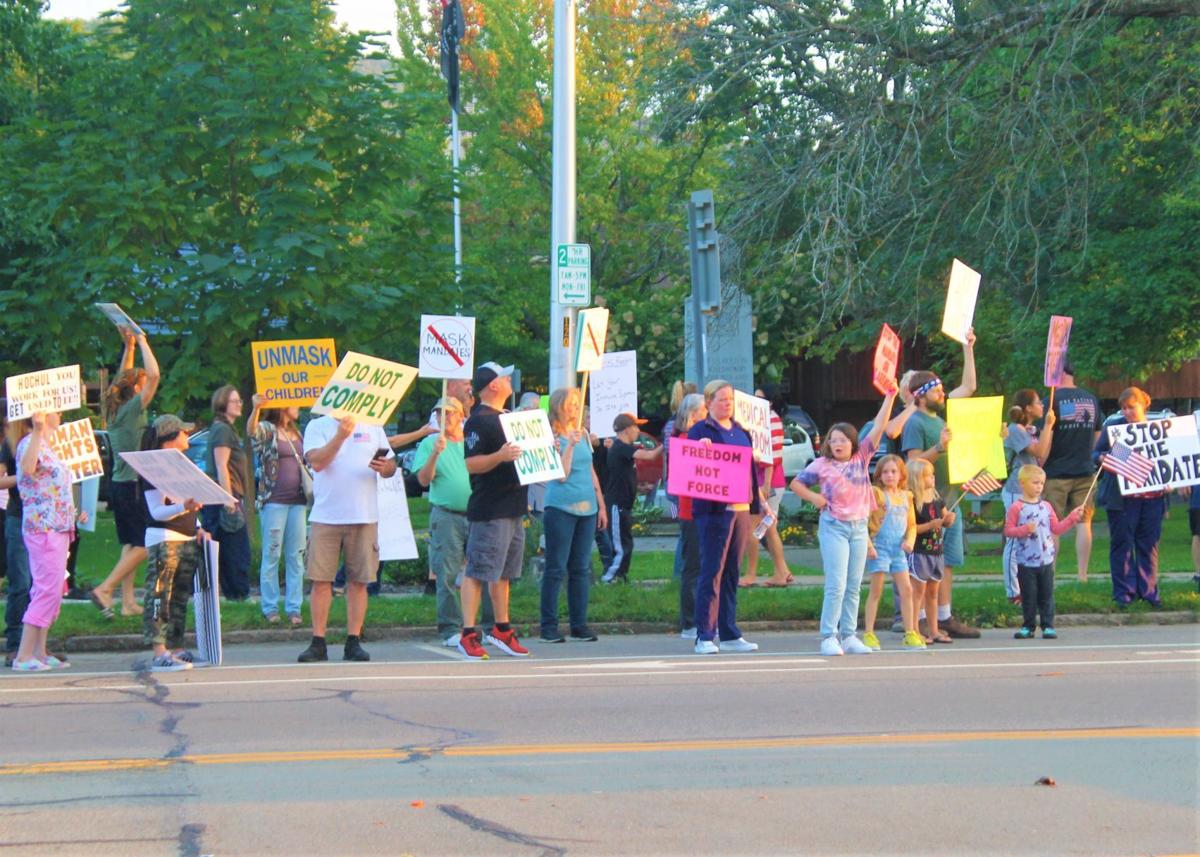 At 6:30 p.m., people lined East State Street across from the Olean Municipal Building and near and even on the State and Union roundabout.

Many of those in the crowd carried American flags or signs with messages like, “Do not comply,” “Unmask our children,” and “Stop the mandate.” People of all ages attended, including young children. Almost no one wore a mask.

Event organizer Ciara Buchanan said frontline workers served and worked through the pandemic “serving and protecting, giving countless time and energy, day in and day out,” and did so without a vaccine.

“Praised as heroes and essential workers last year, and now they are this year’s persecuted and public health threat for simply making a personal choice not to inject something into their bodies that they are not 100 percent comfortable with,” said Buchanan of Olean.

Public health officials, including Dr. Kevin D. Watkins, director of public health for Cattaraugus County, routinely urge residents to receive the vaccines as protection from COVID-19 and to mitigate the spread — particularly of the more-contagious Delta variant.

The hospital — which employs 840, according to parent group Upper Allegheny Health System officials — is encouraging staff to get vaccinated but caution state and federal officials against mandating vaccines without a testing opt-out system that would keep hundreds of workers on the payroll amid a new wave of the disease.

Hospital administration was unaware of the planned protest Friday or that Olean General employees would be there, Dennis McCarthy, a hospital spokesman, said Friday.

“If they’re protesting the vaccine mandate, that’s a New York state issue,” he said. “All the hospitals are affected by this, not just Olean.”

RACHEL PONKA, a registered nurse at OGH for 10 years, said she fears a forced mandate will make the healthcare crash if so many employees are forced to resign. She said all aspects of the healthcare industry would be affected and more people will suffer.

“We have a really bad shortage right now and the mandate hasn’t even taken effect,” she said. “Olean General has 250 people that haven’t been vaccinated. This is janitorial staff, receptionists, nurses, aides, it’s down the line. People don’t realize how these facilities are going to be affected.”

Announced in August by then-Gov. Andrew Cuomo, the plan calls for hospitals and nursing homes to be at 100% compliance by Sept. 27, while adult care facilities have until Oct. 7. If staff members are not in compliance, termination is the expected course of action.

However, a federal judge in Utica on Tuesday temporarily halted the order while a case involving 17 doctors and nurses in the Northern District of New York is decided.

Since then, McCarthy said some hospital employees have chosen to receive a vaccine. He said he didn’t have an update on whether more employees have resigned.

Ponka said it’s crucial that the healthcare facilities in the area stay staffed. She said she’s talked with staff of other facilities and many don’t know how they’ll function if a significant amount of employees were forced to resign.

“It comes down to keeping people safe, and the way to do that is to have people to care for them,” she added.

MEANWHILE, SCHOOL districts across New York learned in early September that districts will be required to test employees on a weekly basis according to the latest guidance from the state Department of Health. Those who are fully vaccinated will have the opportunity to opt-out of testing by providing proof of vaccination.

Additionally, everyone inside a school building must wear a mask at all times, regardless of vaccination status. On school buses, passengers and drivers must wear masks.

“I don’t think we should have the government dictate whether or not we need to wear a mask or have to have a vaccine. It should be a person’s individual choice,” said Mark Schindlbeck.

“And parents should be able to decide for their children not to get vaccinated,” added Christine Wheeler.

Schindlbeck noted they are both vaccinated, but the mandates and the lack of information about the long-term effects of the vaccine is something people have a right to be concerned about.

“We want other people to know that people out there who might feel like they’re don’t want to be forced to get a vaccine or have their children wear a mask that they’re not alone,” Wheeler said.

A resident of Franklinville, Schindlbeck said each town holding its own protest wouldn’t be as effective as everyone coming together in a more populated area.

“We don’t tend to do stuff like this, but we’ve been kind of pushed to it,” he added.

COMING TOGETHER to stand up for medical freedom is why Jim Cline said he attended the event.

“Choice. It’s all about freedom of choice,” he said.

A resident of Cuba, Cline said the government trying to push people into receiving the vaccine isn’t right. He said his wife, who is a teacher, has to be tested weekly because she isn’t vaccinated. But he noted that those who are vaccinated don’t have to be tested, even though the vaccinated can still contract COVID-19 and transmit it to others.

Cline also noted what he called the inconsistencies and lack of information about vaccine-related injuries and deaths as a concern.

“We have our constitutional rights, and that’s being infringed on,” he added. “I feel that to say that they’re not forcing us is a lie.”

AT THE FEDERAL level, President Biden last week mandated that all private employers nationwide with more than 100 workers require vaccination or weekly testing, affecting about 80 million Americans. And the roughly 17 million workers at health facilities that receive federal Medicare or Medicaid also will have to be fully vaccinated.

Biden is also requiring vaccination for employees of the executive branch and contractors who do business with the federal government — with no option to test out. That covers several million more workers.

The U.S. Food and Drug Administration gave its full approval of the Pfizer COVID vaccine last month, while the Moderna and Johnson & Johnson vaccines are still being distributed under emergency approvals by the FDA.

Health officials had hoped that the formal approval of the Pfizer vaccine would encourage more skeptics to receive it, but vaccine hesitancy has remained a strong theme throughout the nation.