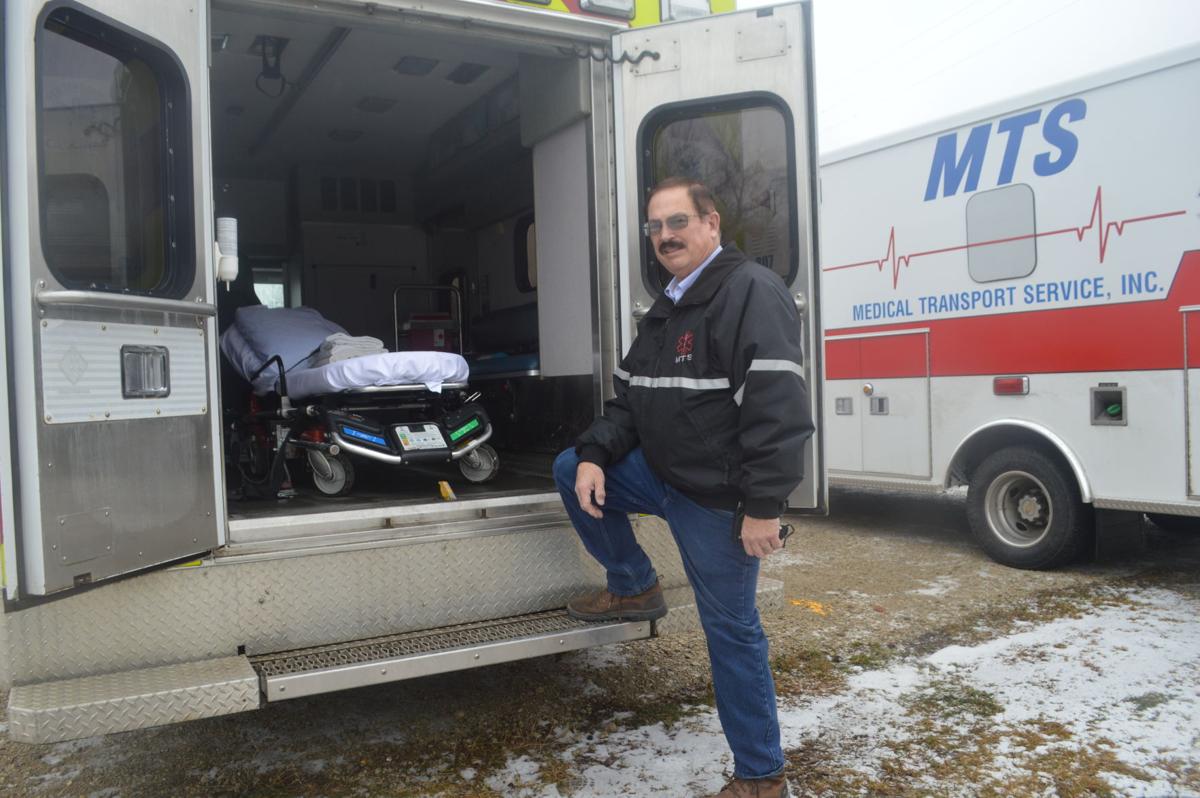 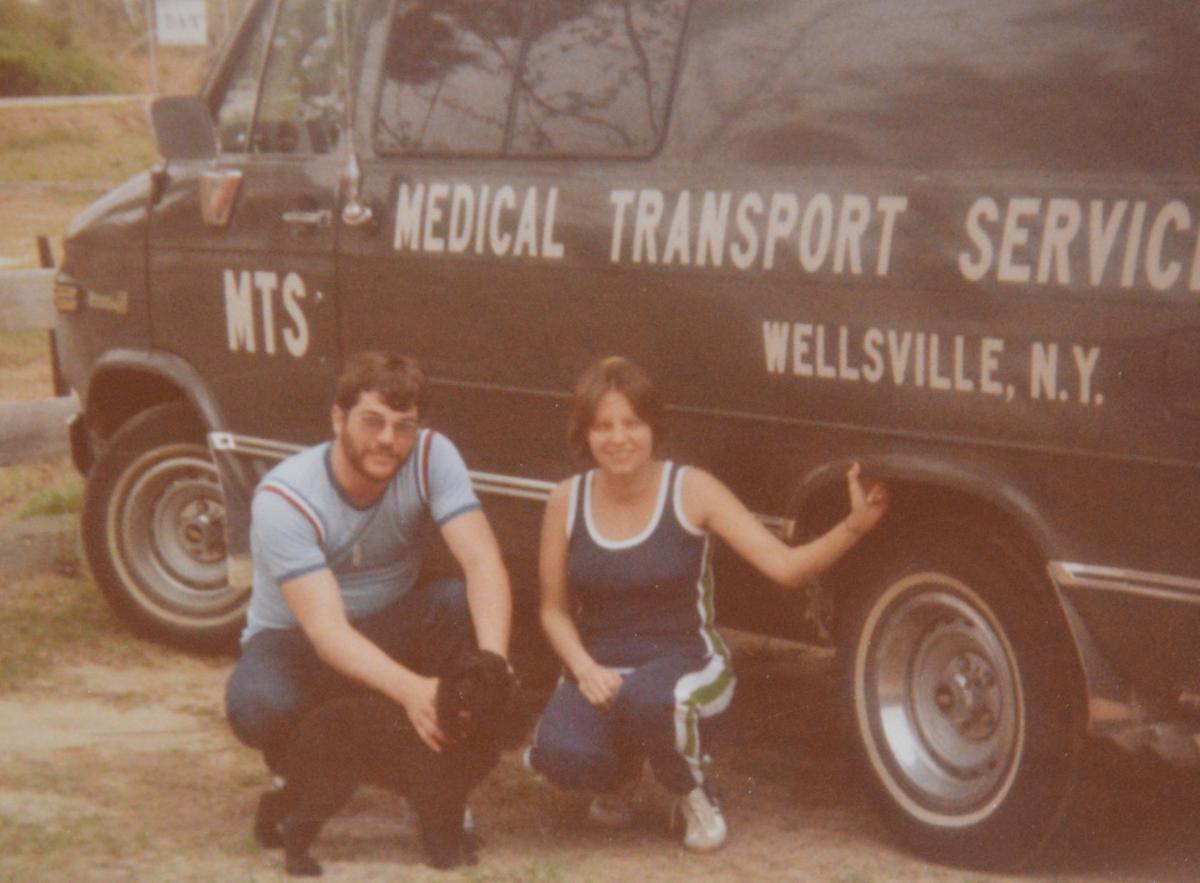 SCIO — Music led a Wellsville boy to a lifetime of service in the emergency medical field, which is slowing down this month with the sale of Medical Transport Service, Inc.

Dan Marsh, the founder of MTS, is retiring and has sold the business, located in Scio, to Scott Lanphier. For Marsh, who says he plans to keep his hand in working part-time for the next three to six months, it will be a dramatic change of lifestyle, as he turns away from something he has pursued since he was 12 years old.

The Wellsville Volunteer Ambulance Service was younger than Marsh when he became involved with it.

“I got into EMS because I played the trombone in the school band,” he recalled. “Some of the members of the Junior Division of the Civil Defense, which was part of the rescue squad, invited me to come and play with them in their band.

“Back then the department had a weasel and they’d put a couple of pieces of plywood on it and some stools and we’d ride down the street during parades,” he said. “We played a lot of Tijuana brass music.”

From there, he convinced his parents, Don and Ruth Marsh, to put an antenna on the roof of the family home and get a scanner that would allow him to monitor calls for emergency services. He would ride his bike to nearby calls. Some of those calls were fatal auto accidents while others involved complicated extractions.

The Wellsville Volunteer Ambulance Corp was founded in 1967. Marsh officially joined when he was 16 in 1969.

“I got to know all the founders — Bob Decker, John Burdsall, Leroy Dodson, Roy Lucas and the rest,” he said. “I convinced my parents to let me drill holes in the car so I could attach an antenna and my mom would drive me to night calls.”

At 16 he was only allowed to drive during the day and to only school events after dark.

“Eventually, she joined,” he added.

As a member of the WVAC, Marsh was in the second emergency medical technician certification class to be held in the county. He attended class at Alfred State College, where he would be sent into a dark room with only a flashlight and told to deal with what he found there.

“It was very hands-on training,” he said.

WVAC members ran six-hour shifts with just four people. During those early years, Marsh said he learned to use every piece of equipment on the rig and to drive the ambulance. He served with the corps from 1969 to 1979, when the role of the volunteer ambulance service changed.

“In 1979 the ambulance corps put out a letter to the hospital and nursing homes telling them that due to a lack of responders they would no longer be able to do routine transfers,” he said.

At the time, Marsh had been attending college for pre-law at Canisius College and criminal justice at Alfred University. Even though he had a high number for the military draft, he was able to get a college deferment and, later, he earned an ROTC commission and didn’t have to serve in Vietnam.

LivePerson to Participate at Investor Conferences

During that time, he also started working at Giant Food Mart, tending to spoiled fruit, and four years later becoming a manager.

“I wanted to be a police officer, but my parents wanted me to get a four-year degree,” he said.

Meanwhile, after the ambulance corps announcement in ‘79, Marsh decided to go into business for himself. With the help of his mother, he started the Medical Transport Service that same year. With a converted 1978 Chevrolet van and one other employee, he transferred a first patient on Sept. 1, 1979.

“We were an invalid coach service. We had no medical equipment,” he said, remembering that they had a stretcher and oxygen.

To keep the infant company operational, Marsh was joined by John Fleischman, Dan Martelle, Earl Whitter, Al Abbott and a young nurse named Annette Kelly, who he married in 1980. His father would sometimes drive for him and his mother would answer the phone and track Dan down.

“She’d call me, and I would start calling around to get a crew,” he said.

On long transfers a nurse from Jones Memorial Hospital would ride along and the ambulance corps would lend them medical equipment.

Some of their longest calls have taken MTS crews to Wharton, Mass., Long Island, Wilmington, Del., Virginia and Canada.

Marsh recalled that when he and Annette would go on a long transfer their daughter, Kelly, would ride along in her car seat.

He said the most satisfying part of his work for the past 42 years is helping people he knows.

“We can’t go to a restaurant or grocery store without people expressing their appreciation,” he said. “Yes, I would do it all again.”

He has dedicated his life to EMS in Allegany County, the region and the state, serving on New York’s Southwestern Regional Emergency Medical Service Council and the United New York Ambulance Network.

To this day he remains a certified EMT.