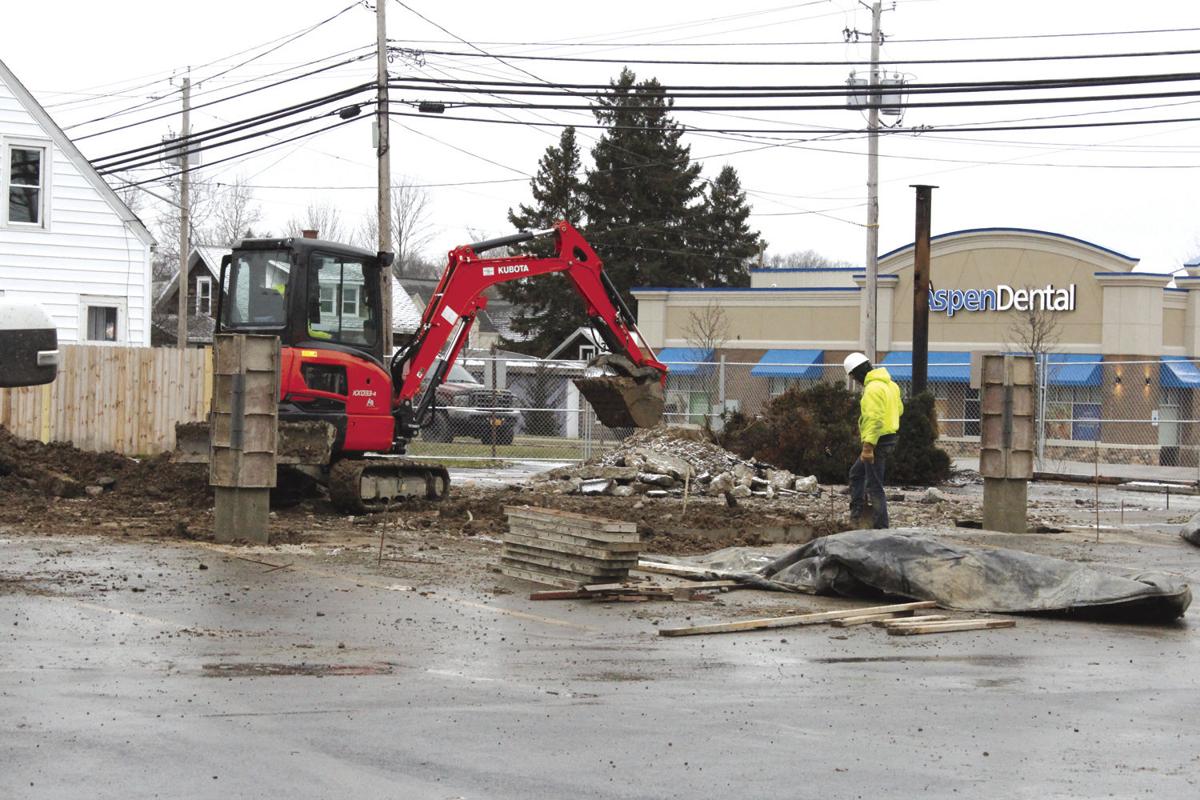 A construction crew works on the foundation of the new Subway restaurant Thursday on the West State Street site of the old Subway that burned down. Franchise and property owner Matthew Keller said the plan is have the new store opened in early May.

A rendering of what the new Subway restaurant in Allegany will look like once constructed. The location will have Subway’s new “Fresh Forward” design.

A construction crew works on the foundation of the new Subway restaurant Thursday on the West State Street site of the old Subway that burned down. Franchise and property owner Matthew Keller said the plan is have the new store opened in early May.

A rendering of what the new Subway restaurant in Allegany will look like once constructed. The location will have Subway’s new “Fresh Forward” design.

ALLEGANY — Construction has started on a new Subway restaurant in Allegany that will have a more modern look than the previous structure that burned down in September.

The franchise and property owner, Matthew Keller, said Thursday general contractor Kinley Corp. began work Dec. 17 at the same West State Street location of his former Subway. He added crews just finished work on the foundation and walls may start going up next week, with hopes of completing the new store in time for an early May opening.

The Allegany Town Planning Board previously approved the reconstruction around early December.

“It feels great. It’s amazing. It’s something I’ve been waiting months for,” said Keller, who is also the Cattaraugus County deputy treasurer. “Just seeing it actually moving just kind of makes you feel better, kind of gets you excited to keep moving forward.”

Keller’s old Subway restaurant, a converted Pizza Hut located right at the border of the city of Olean and town of Allegany, was destroyed in a large Sept. 29 blaze that attracted crowds of onlookers.

Cattaraugus County fire investigators have said the blaze was the result of a mulch fire in front of the restaurant, which was likely sparked by a discarded cigarette.

“I can tell you the new building will have zero mulch,” Keller said Thursday with a laugh. “It’s going to have the best rock garden in Olean.”

A rock garden won’t be the only new feature.

The sandwich chain is hoping to eventually bring the design to all of its roughly 44,000 locations worldwide. QSR magazine reported in September that Subway has brought the design to 465 locations since July 2017.

However, Keller said he believes his Subway will be the first with the Fresh Forward design in Upstate New York.

While excited for the changes, Keller noted he always enjoyed the layout of his previous Subway, which he helped design and included leather furniture, a fireplace and television.

“It’s going to be tough based on how this layout is,” he said of striving to make the new location have a similar atmosphere to the old one. “It will be easier for me to visualize it once I have the walls up.”

Keller, 37, started working at the former Subway at 2234 W. State St. in Olean when he was just 16. He and his family purchased the restaurant when he was a St. Bonaventure University sophomore in 2001, and 12 years later they moved it down the street to the current location.

He said the last three months have been a “pretty trying” experience.

“There’s the fire and then there’s dealing with fixing the fire, and I have a feeling I’m going to be dealing with fixing that second issue for quite some time now because you still got insurance that you’re dealing with and contractors and rebuilding everything,” he said. “It’s going to be an event that probably consumes the greater part of a year from start to finish, but the worst is gone. Now it’s actually the exciting stuff, if you will.”